Accessibility links
The 500-Pound 'Chicken From Hell' Likely Ate Whatever It Wanted OK, maybe it just munched vegetation, small animals and eggs. But this newly named dino looked like a cross between a chicken and a bulked-up ostrich. Five-inch claws? We'd have stayed out of its way. 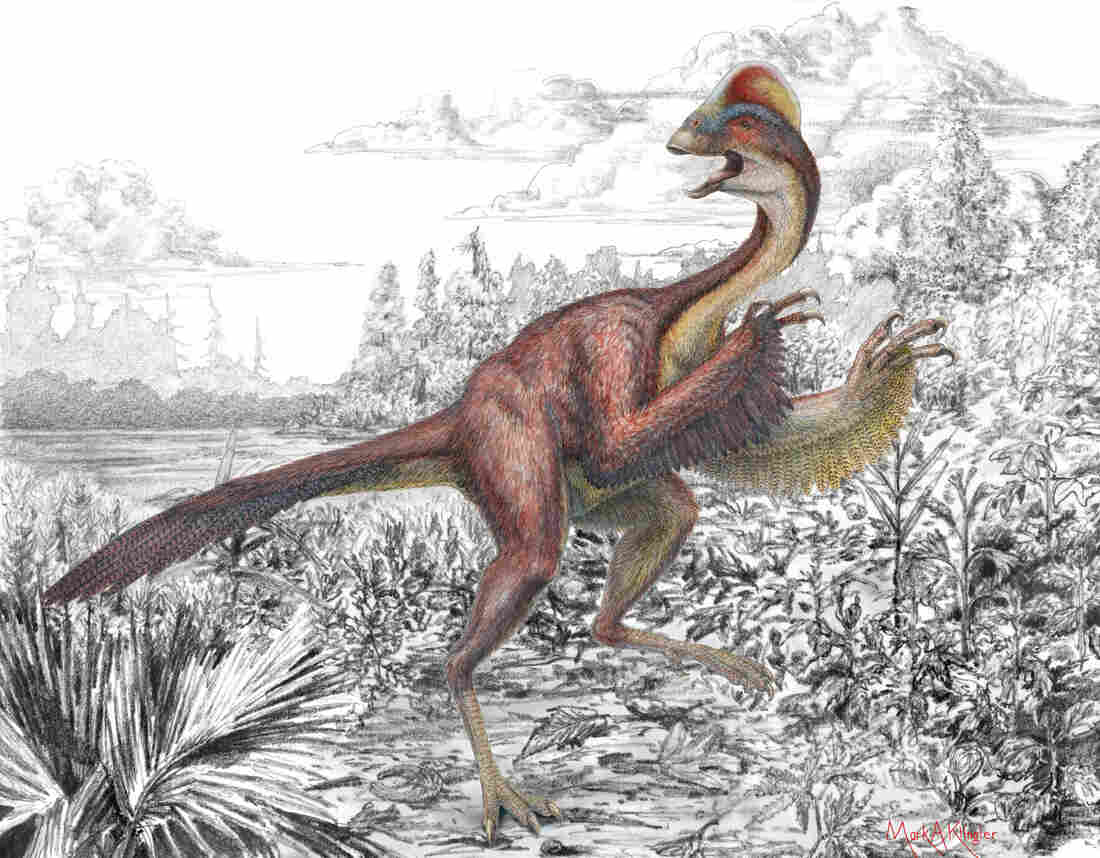 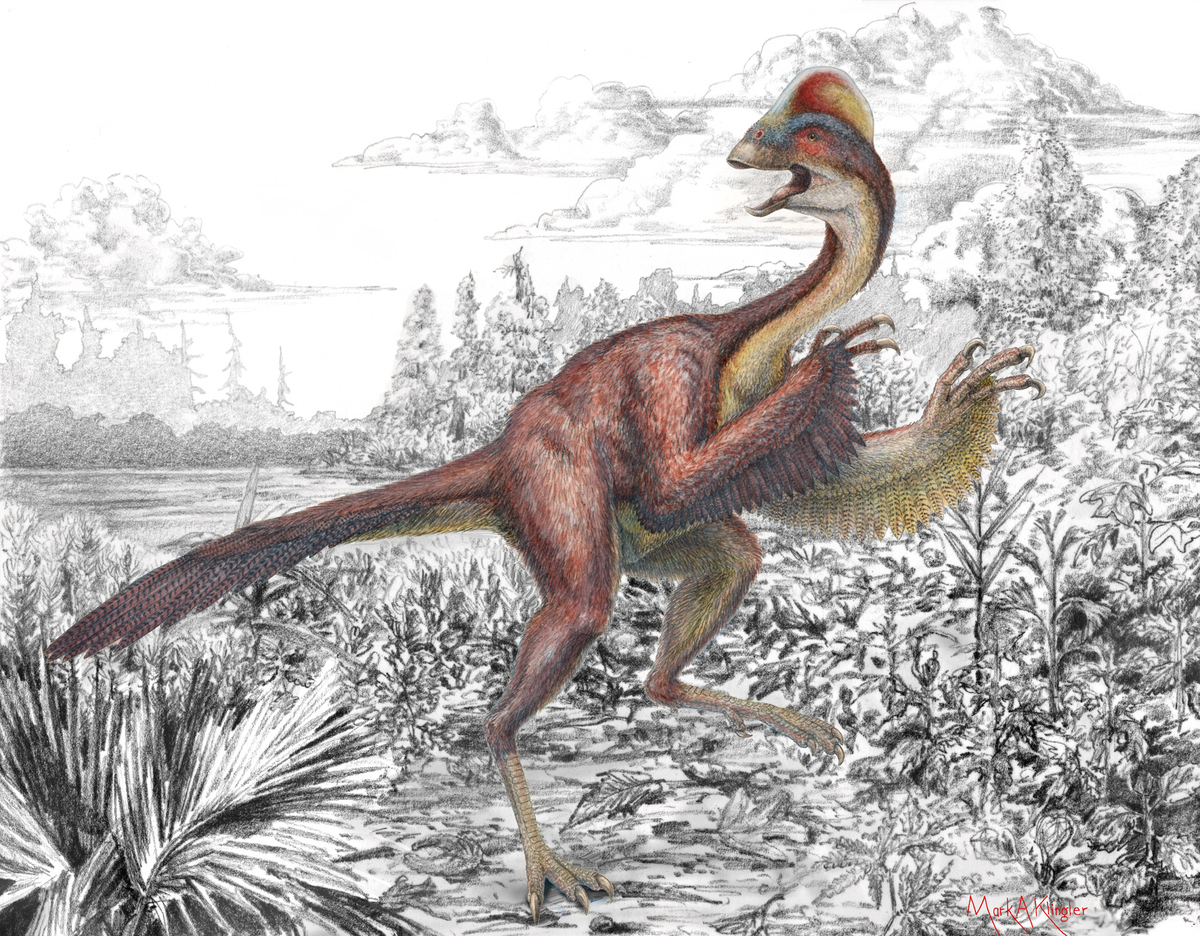 For the past decade, dinosaur scientists have been puzzling over a set of fossil bones they variously describe as weird and bizarre. Now they've figured out what animal they belonged to: a bird-like creature they're calling "the chicken from hell."

There are two reasons for the name.

First: If you took a chicken, crossed it with an ostrich, bulked it up to 500 pounds, stretched it out to roughly 11 feet, put a bony crest on its head (like some ancient Greek helmet), added a dinosaur tail and a pair of forelimbs with five-inch claws, and then, finally, stuck some feathers on it ... you would have what paleontologist Matt Lamanna formally calls Anzu wyliei. 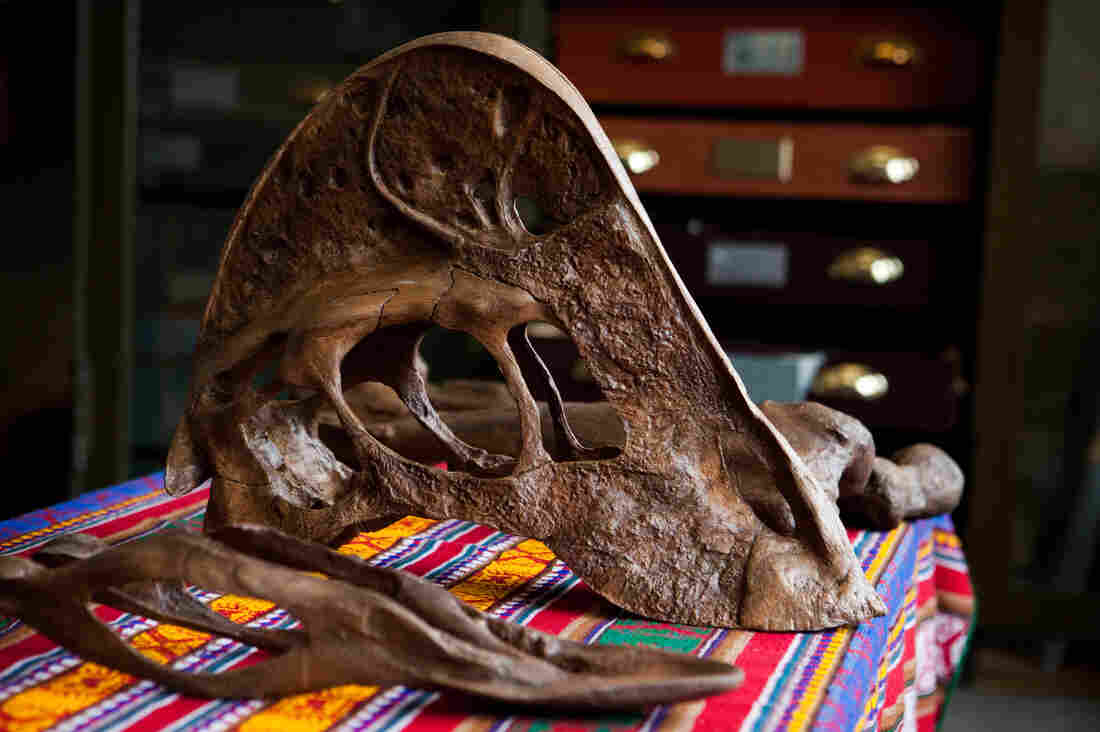 A reconstruction of the skull of the Anzu wyliei at the National Museum of Natural History in Washington, D.C. Its foot-long lower jaw and powerful toothless beak suggest the bird-like creature may have been omnivorous, paleontologists say. Maggie Starbard/NPR hide caption

"If you were to take a time machine back to the end of the age of dinosaurs (fossil-hunters love the idea of time machines) ... and encountered this animal, your first thought would probably be, 'What a big, weird looking bird,' " says Lamanna, the top dinosaur scientist at the Carnegie Museum of Natural History in Pittsburgh. "I actually think 'chicken from hell' is a pretty good nickname for this thing."

Reason two for the nickname: The three new specimens Lamanna has now put together were dug up from the Hell Creek geological formation in Montana and the Dakotas.

Professional fossil hunters found the bones more than a decade ago, Lamanna says. One was Tyler Lyson, who grew up in North Dakota and now works as a postdoctoral fellow at the Smithsonian's National Museum of Natural History. 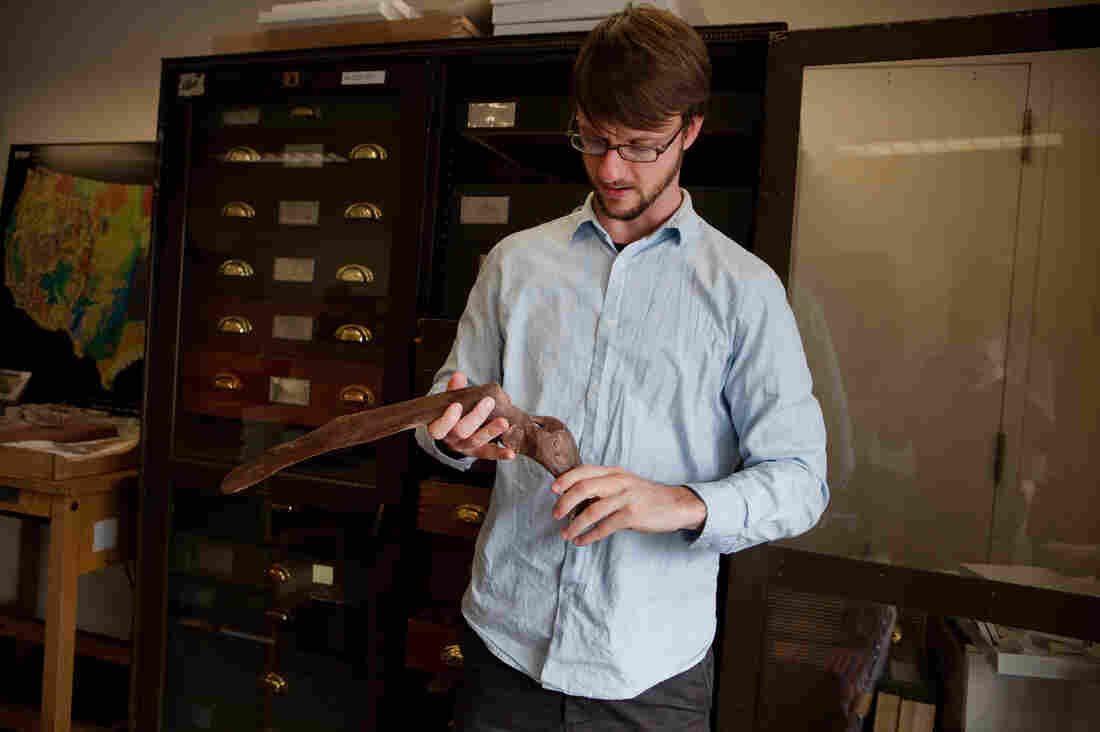 Tyler Lyson holds the scapula of the Anzu wyliei. Lyson was in high school in 1999 when he discovered the bones from one specimen on his uncle's ranch outside of Marmarth, N.D. Maggie Stabrard/NPR hide caption 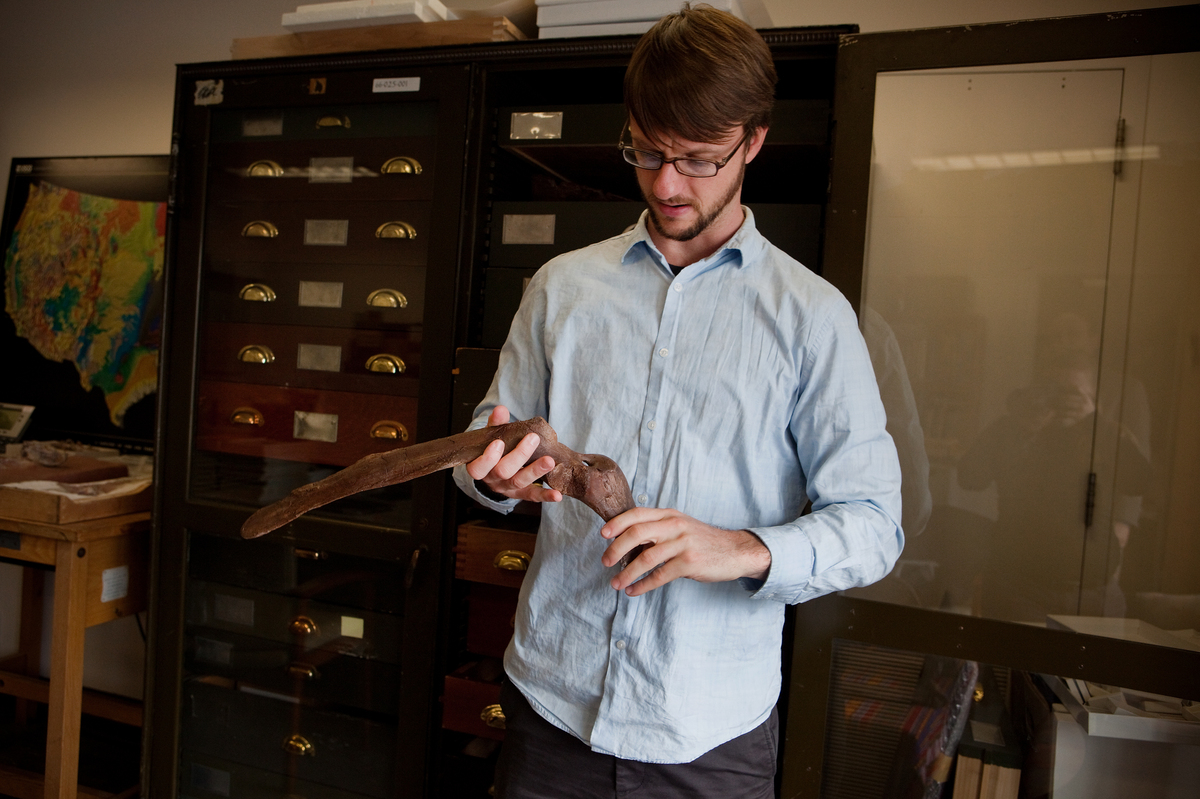 Tyler Lyson holds the scapula of the Anzu wyliei. Lyson was in high school in 1999 when he discovered the bones from one specimen on his uncle's ranch outside of Marmarth, N.D.

"Starting as a young kid," Lyson says, "I would go out with paleontologists who would come to the area, and they would hire me." They paid Lyson 50 bucks a day — and he says he earned every penny. "They worked me." It was better, he admits, than the lawn-mowing business he'd had before. Fossils were more fun. He says his mother would pack a lunch and take a lawn chair out and watch while her son looked for bones in the badlands.

One day, when Lyson was in high school, he found a big bone. And then more of them. Other fossil hunters turned up yet more in the same vicinity. This part of the Hell Creek formation has produced a lot of dinosaur bones, and for years these partial skeletons sat around in museums. Then Lamanna got interested in the bones at Carnegie. He helped organize a research team that spent years studying them. They knew about similar bird-like dinosaurs in Asia called oviraptors. These three new specimens were clearly related to those oviraptors ... but different. Bigger. Stronger. And with some different bone shapes, too.

At the Smithsonian, there are several drawers full of casts made from the Hell chicken — in an antique cabinet in the office of Hans-Dieter Sues. 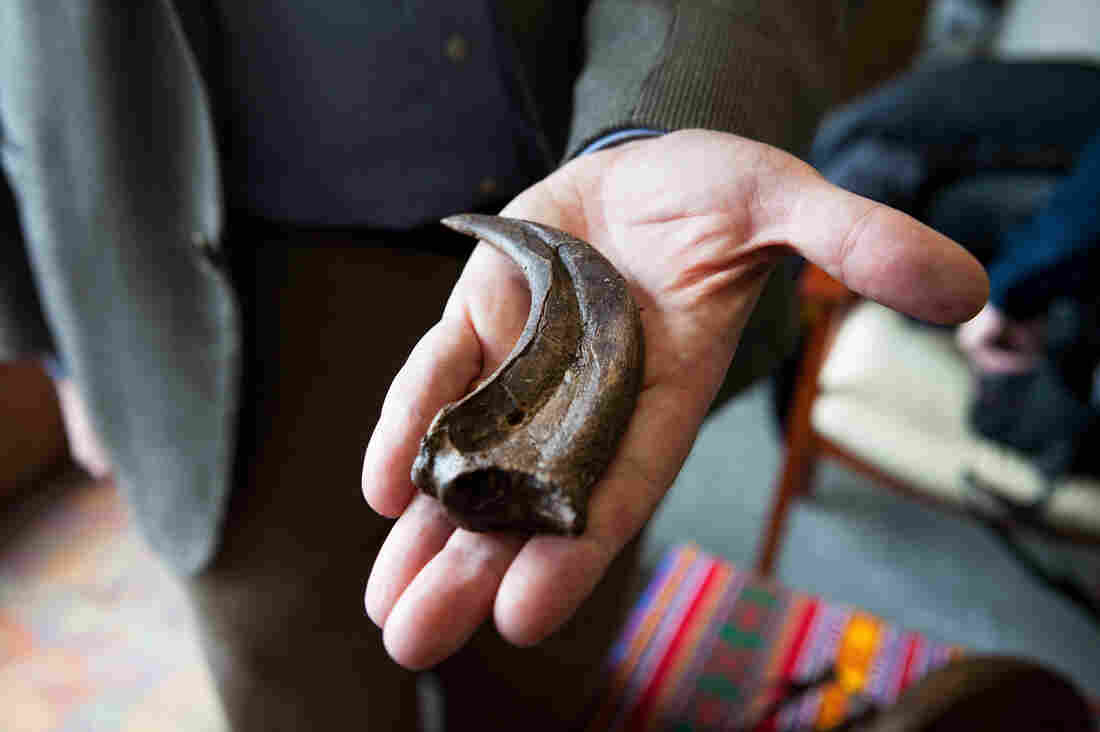 Sues is a curator of vertebrate paleontology at the museum. He hoists the skull to show off the strange shape. It's the size of a watermelon with this ridge-like bony crest on top, that looks like a mohawk haircut. The lower jaw is a foot long. Like a bird, the dinosaur had no teeth. What the skull does have is a special hinge where the upper and lower jaws fit together. "So the jaw could sort of slide back and forth to cut food between the two halves of the beak," Sues says, noting that this is the way rats chew. Who knew?

Hell chicken probably ate vegetation. Small animals, maybe, and eggs. Certainly it was fast — with its thigh-bone like a baseball bat, and bony ridges where big muscles could attach. "This would have been a really big, massive drumstick," Sues laughs. And the shin bone is actually longer than the thigh bone. "That's always a dead giveaway for an animal that can run really fast," he says.

The tall crest and almost certain presence of feathers mean that it used visual display as a means of communication — and we can only wonder at what kind of courtship and threat displays it might have had.

Sues says the discovery, described in the journal PLOS One, shows how widely — and wildly — life forms evolved. "We had little bits and pieces of it," he says of the Asian bones that were known before, "but now we have, for the first time, a complete picture of what this creature look[ed] like ... certainly a remarkably odd-looking creature."

Something the other Dr. Seuss might well have invented.

"It had to have been a very interesting and engaging animal in life," says paleontologist Lawrence Witmer of Ohio University. "The tall crest and almost certain presence of feathers mean that it used visual display as a means of communication — and we can only wonder at what kind of courtship and threat displays it might have had."

For Lamanna, the discovery shows that there are still new fossil surprises to dig up.

"What else is waiting for us out there in some of the far reaches of the world?" he asks. "That's one of the most exciting things to me about being a dinosaur paleontologist."