Accessibility links
From Action Hero To Teenage Nerd, Shailene Woodley Has Range With the potential blockbuster Divergent on the horizon, the actress has been busy positioning herself as a dynamic performer, from the indie The Spectacular Now to the YA film The Fault in Our Stars. 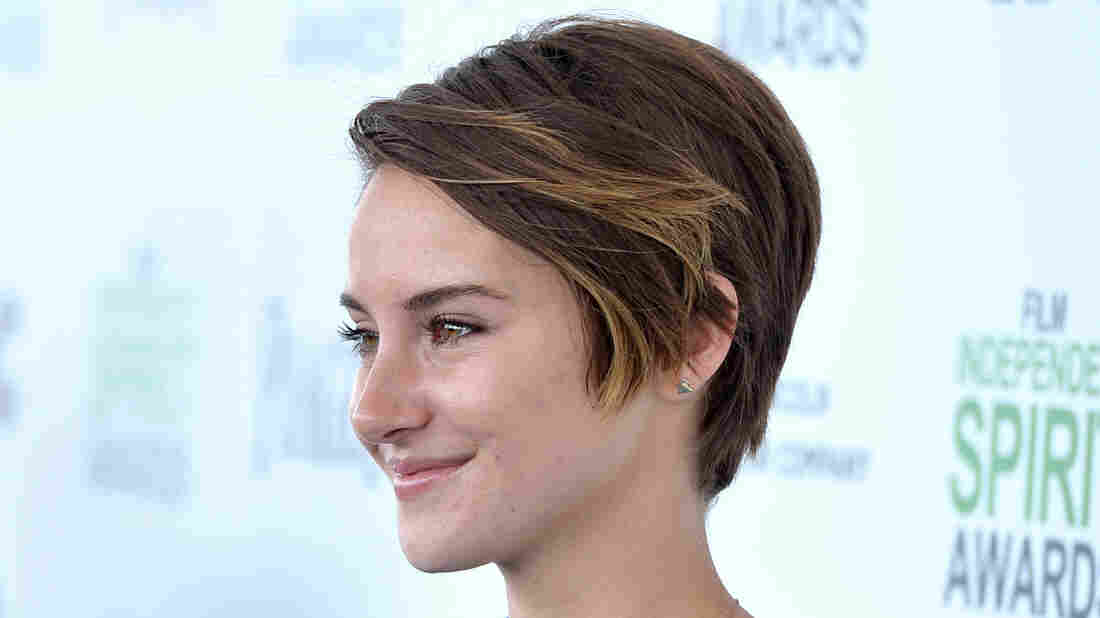 "I'm sorry you have to see my pancake face."

Those are among Shailene Woodley's first words as she opens the door to a suite in the Beverly Wilshire Hotel. She's got a publicists' luncheon later in the day — otherwise, she explains, under absolutely no condition would she have worn makeup for an interview.

Woodley is against makeup. She's against new clothes. But she's a Hollywood starlet whose job it is to mask herself in makeup and couture. She thinks people should know how imperfect her skin is in real life, but Woodley is also pragmatic about Hollywood's demands on young actresses, especially those shouldering potentially multimillion-dollar franchises.

And Divergent, Woodley's new movie, is being positioned as the next The Hunger Games. It's the first installment in a big-screen adaptation of the bestselling young-adult trilogy by Veronica Roth — set in a dystopian future Chicago, where citizens are divided into factions — and Woodley's being seen as possibly the next Jennifer Lawrence, who, of course, stars in the Hunger Games films.

Last year, she played a rabbity nerd in the critically acclaimed The Spectacular Now; in June she'll be seen as a young cancer patient hoping to meet her literary hero in another young-adult novel adaptation, The Fault In Our Stars. Then comes her turn in a movie by provocateur director Gregg Araki, White Bird In A Blizzard, about a girl whose mother disappears in the wake of a nervous breakdown, also based on a novel.

"The books kind of do the work for you," Woodley observes about the advantages of playing such roles. "I would read a scene, then read that same scene in the book and get a bigger perspective of what my character is going through in that moment."

Woodley enjoyed two big breaks before her current crop of movies. Starting in 2008, she played the lead in the ABC Family series The Secret Life of the American Teenager, which ran for five years. In 2011, she played George Clooney's sulky daughter in The Descendants.

But she started acting when she was only five, in TV commercials.

"I learned as I went," she says. "I mean, I would take acting classes — not like scene breakdowns, just improv-ing."

Woodley stresses that acting, for her, isn't about analyzing scripts or probing her characters' motivation.

"I don't really work that way," she explains patiently. "For me, it's about being fully present and actively listening to every single thing that's going on around me and reacting to it. Because I feel the second I premeditate something, it's going to feel premeditated."

In Divergent, Woodley's character, Tris, faces countless extreme situations --leaping into dark pits, getting trapped in water-filled boxes, facing down fierce dogs — and even worse, Kate Winslet as an icy, politically powerful nemesis. Author Veronica Roth, who wrote the trilogy, remembers being on set and listening to Woodley loudly emote though a scene in which something truly awful happens to her character.

"When you hear someone making those kinds of gut-wrenching, agonized noises, you feel like you have to go help them," she recalls.

Author John Green knows just what she's talking about. He had the exact same experience while watching Woodley film an emotionally devastating scene in the film based on his book The Fault In Our Stars.

"She was so inconsolable I wanted to go there and check on her," he confesses. "I actually asked the producers — I think you should stop and make sure she's okay. And they were like, She's fine."

Afterwards, Green was startled when Woodley bounced off set and asked lightly what he'd like for lunch. One of the things he appreciated about Woodley was her determination, like his heroine's, to live by certain principles.

Woodley often comes across like an enthusiastic senior at Earlham or Evergreen State College in her passions for indigenous culture, herbalism and sustainable farming. That impression is only strengthened when she's asked what character she'd most like to play.

"Stevie Nicks," she responds immediately. "She's my dream. My dream! My dream!"

She could do worse than look to someone like Nicks — someone who found success by subverting the expectations of the traditional ingénue and playing more or less on her own idiosyncratic terms.