Accessibility links
Movie Review - 'Nymphomaniac: Volume I' - Addicted To Sex, But Not Really Having Much Fun The first volume of Lars von Trier's four-hour Nymphomaniac is in theaters this week. NPR's Bob Mondello says it's racy, sure — but oddly funny, too. 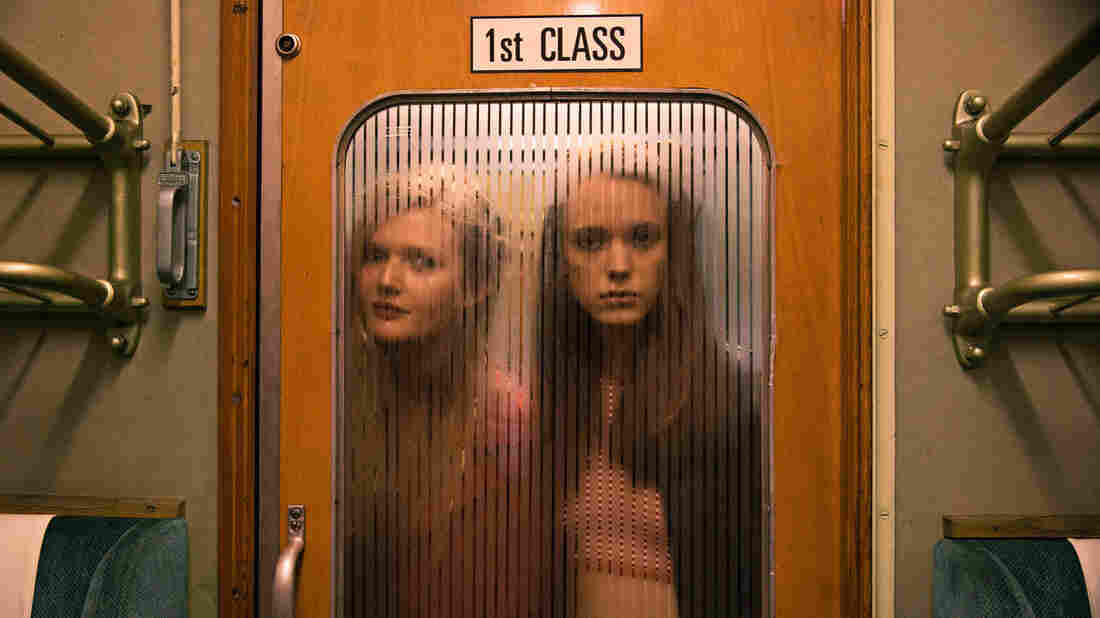 Danish filmmaker Lars von Trier has found all sorts of ways to provoke moviegoers in the past — with metal spikes in Antichrist, by ignoring narrative conventions in Dogville, by presenting depression as the only reasonable reaction to the world as we know it — and then destroying that world — in Melancholia. And as if this last weren't enough, he told a Nazi joke to a crowd prepared to shower him with adulation at Cannes.

So it's reasonable to expect something decently outrageous, or perhaps indecently outrageous, from a four-hour opus called Nymphomaniac — of which the first half, designated Volume I, is being released this week in theaters and on VOD. Oddly though, the most shocking thing about the film is that it often prompts laughs.

Start with the opening, in which a middle-aged bachelor named Seligman (Stellan Skarsgård) offers to call an ambulance for a battered woman named Joe (Charlotte Gainsbourg), as she lies battered and bloody in the rain. Her response, "I'd like a cup of tea ... with milk."

So he takes her to his home, gets her dry and warm, serves her tea, and asks her what happened.

"It's my own fault," she responds. "I'm just a bad human being." Then she promptly changes the subject, asking about the fishing flies Seligman has mounted on the wall.

Her host turns out to be a collector of random factoids on everything from fly fishing to fingernail trimming to music theory. He's also a conversation-interruptus listener, which suits her fine.

She's game to talk about losing her virginity at 15 (to distracted motorbike mechanic Shia LaBoeuf) or trolling with a girlfriend for sexual partners on a train. But it's Seligman's interruptions, as when he compares that trolling to "reading the river," that leaven her stories for the movie audience.

Joe's sexual life — in flashbacks, where she's played by Stacy Martin — would be central for most directors. Von Trier finds the framing story more intriguing — a place where the characters are more than the sum of their body parts, or even their desires and addictions. It's a place for philosophizing, observing, analyzing — often inaccurately, but always entertainingly.

It allows him to step back from Joe's tales of her seven to 10 daily sexual encounters, to employ various cinematic tricks — split-screen images, for instance, as Seligman represents one trio of her conquests in a kind of harmonic convergence, one of the men representing a musical baseline, another rhythm, the third melody.

He also stages what you might call a minute-long penis parade, and has fun illustrating a sequence where his heroine is shagging so many men that she can't keep them straight; she has to roll dice to figure out how to reply when they phone.

The fact that she's not getting emotionally involved, of course, doesn't mean the men don't. Which can get complicated, as when one guy's wife, played with a frigidly amused calm by Uma Thurman, brings her kids over with an ever-so-polite request to show them the "whoring bed," only to devolve slowly into screams of rage.

What this first half of Nymphomaniac ends up being about is emotional intercourse — something the heroine treats lightly until it becomes clear that despite all the physical intimacy she's experienced, she's irretrievably lonely.

I'm hesitant to make too many predictions about where the story might be going. Von Trier's movies tend to take a sharp turn at the two-thirds mark, and we're not there yet. But based on the foreplay, I'd say tuning in for Nymphomaniac: Volume II, which arrives next month, is a no-brainer.