Accessibility links
Why The Exxon Valdez Spill Was A Eureka Moment For Science In the aftermath of the 1989 oil spill off the Alaskan coast, scientists expected the worst damage to be short-lived. Instead, the spill shattered conventional wisdom about oil's affect on wildlife. 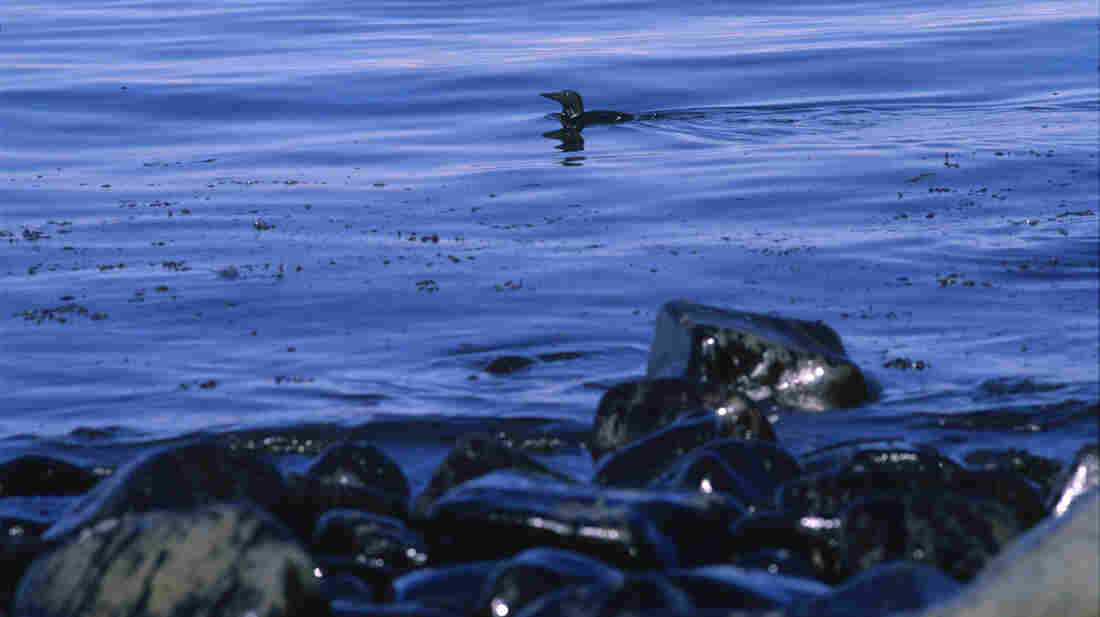 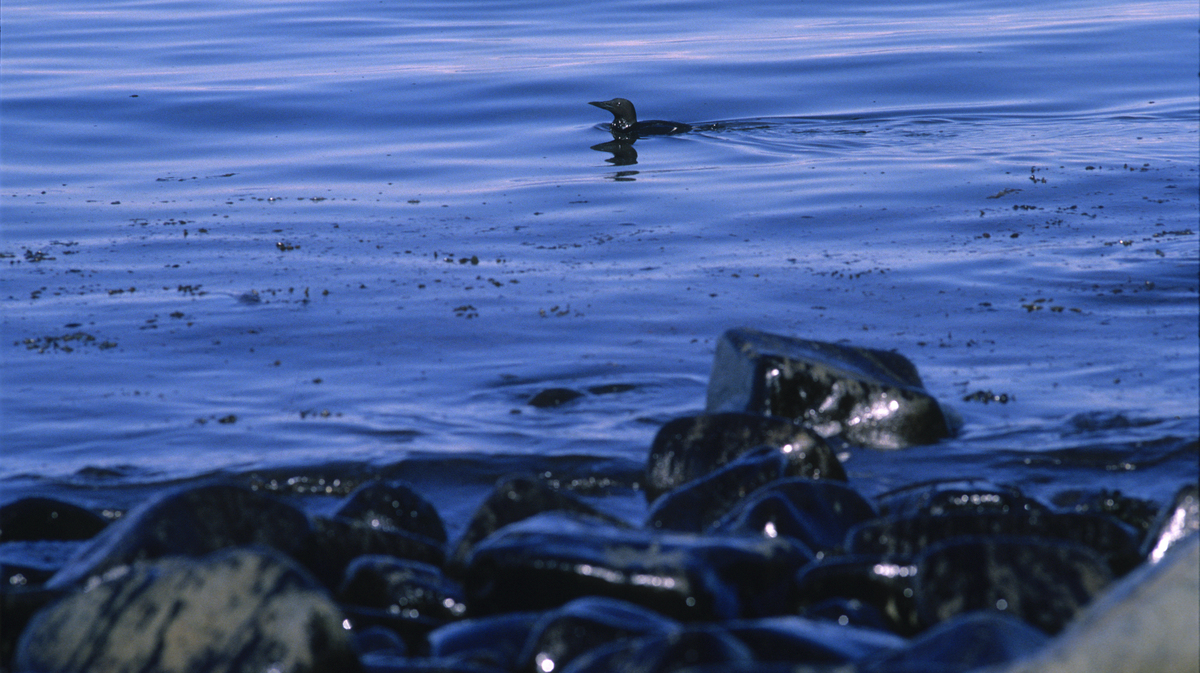 An oiled murre passes the darkened shoreline near Prince William Sound, Alaska, less than a month after the March 1989 spill.

On March 24, 1989, the tanker Exxon Valdez struck a reef in Prince William Sound, Alaska, spilling 11 million gallons of crude oil into the pristine water. At the time, it was the single biggest spill in U.S. history. In a series of stories, NPR is examining the lasting social and economic impacts of the disaster, as well as the policy, regulation and scientific research that came out of it.

Twenty-five years of research following the Exxon Valdez disaster has led to some startling conclusions about the persistent effects of spilled oil.

When the tanker leaked millions of gallons of the Alaskan coast, scientists predicted major environmental damage, but they expected those effects to be short lived. Instead, they've stretched out for many years.

What researchers learned as they puzzled through the reasons for the delayed recovery fundamentally changed the way scientists view oil spills. One of their most surprising discoveries was that long-lasting components of oil thought to be benign turned out to cause chronic damage to fish hearts when fish were exposed to tiny concentrations of the compounds as embryos.

Cordova, Alaska, was the fishing village closest to the spill. Since then it's become a hub for scientists. Researchers recently gathered in the town's library to talk about herring. It was the herring that tipped off scientists that oil's effects were far more complicated than they had imagined.

Here's what happened: Herring were spawning at the time of the spill. None of those herring eggs survived, but a year later the herring population seemed to bounce back. 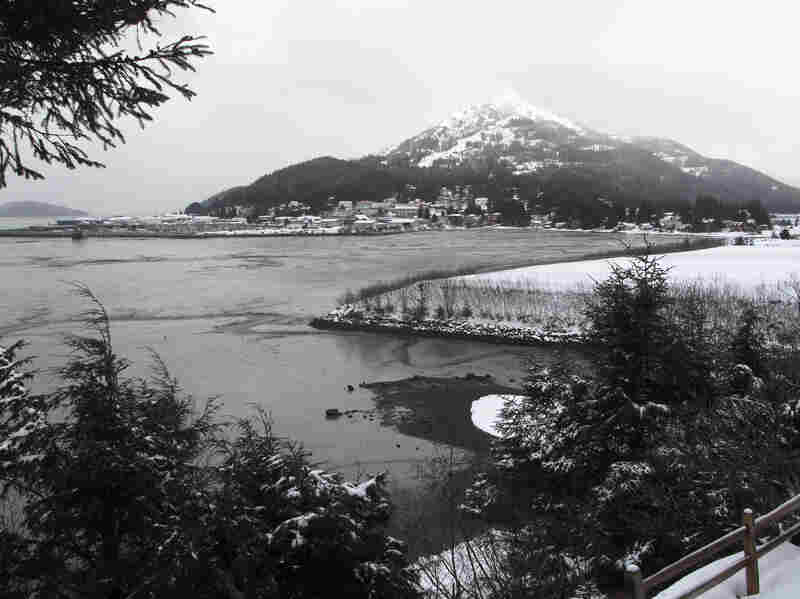 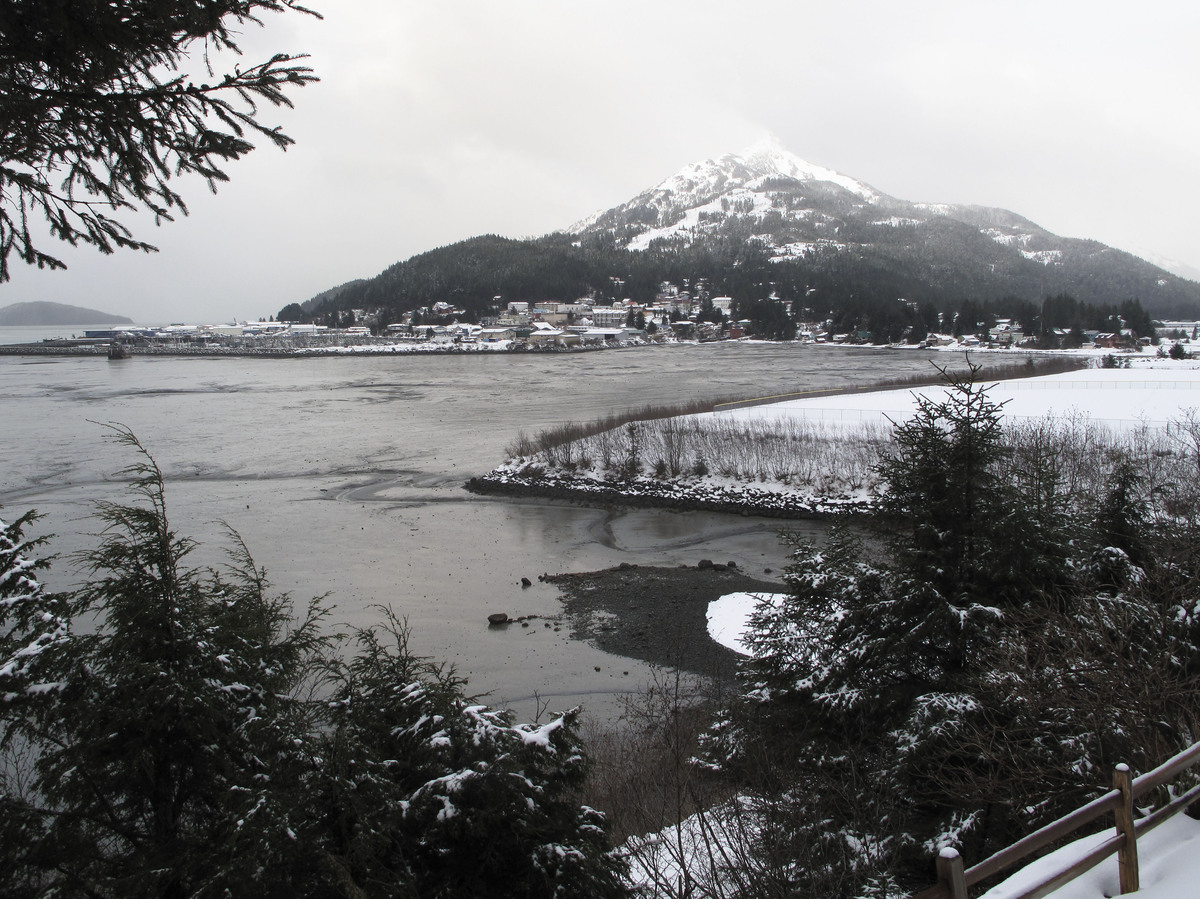 Twenty five years after the oil spill, Cordova, Alaska, has become a hub for scientists.

Scientist Jeep Rice, who recently retired from the National Oceanic and Atmospheric Administration, says herring seemed to match conventional wisdom about the "nature of oil spills."

"You studied them for one or two years. When things were back on track, you walked away," Rice says. "And so we walked away from herring. And all of a sudden they crash to the bottom of the floor, and then we're scrambling trying to figure out why."

In addition to the herring population crashing, other animals — such as killer whales, sea otters, harlequin ducks — also unexpectedly continued to suffer years after the spill.

Scientists had traditionally believed that oil basically had to cover an animal or embryo to hurt it. But the evidence they saw in Alaska suggested it didn't take much oil to do a lot of damage. And that damage could manifest in different ways.

For example, oil under rocks and in sediments contaminated clams that sea otters ate. It didn't kill the otters outright: Wildlife biologist Dan Esler of the U.S. Geological Survey says it shortened otters' lives and suppressed the population for 20 years.

"The understanding that lingering oil could have chronic effects on wildlife populations was a new and important finding, and one that we did not anticipate at the time that we started the research," Esler says.

Through years of research, scientists discovered another unexpected effect, this time related to fish eggs. The clue came from pink salmon, which weren't doing well even years after the spill. To figure out why, Rice's team exposed pink salmon embryos to tiny amounts of oil.

"We were dosing them with oil that you couldn't see [and] you couldn't smell. But we were doing it for a really long time," Rice says. "And six months later, they had abnormalities."

Rice says it was one of the many "wows" that came from his years heading up a NOAA team researching the spill's effects.

Another eureka came when they figured out which components of oil were toxic to fish. The culprits are from a class called polycyclic aromatic hydrocarbon, or PAHs. Before the Exxon Valdez spill, they weren't known to be toxic to aquatic life. But after the spill, scientists discovered these compounds persist long after other parts of oil evaporate.

Even after these cascading discoveries, still no one knew how the oil was damaging the animals over the long term. One possibility was an impact on fish hearts: The heart is one of the first things that develop in a fish embryo.

A different team of NOAA scientists spent many years experimenting with fish in its laboratory. Researchers tried one novel experiment with fish to prove that small concentrations of PAHs were responsible for severely harming fish that looked outwardly normal.

"We put them on a treadmill, in essence, for fish ... and tested how fast they could swim for a prolonged period, and the oil-exposed ones couldn't swim as fast for long," says developmental biologist John Incardona. "And we found that the shape of their hearts were different."

So now the researchers had a good idea which organ was harmed, the heart. But they still didn't know what the mechanism for damage was.

Then came the spring of 2010, when a big BP well spewed oil into the Gulf of Mexico for 87 days.

Because of all they knew from the damage from the Exxon-Valdez spill, scientists focused on fish likely to be spawning, such as the bluefin tuna. Marine biologists feared that the BP spill, like the Exxon Valdez, could have long-term effects, and fish eggs were top on their minds.

"Survivorship of the eggs are critical for future generations, especially on a severely depleted population of the bluefin that breed in the Gulf of Mexico," says Barbara Block, a marine biologist at Stanford University who studies tuna.

The NOAA researchers reached out to Block to help them answer a question that still puzzled them: What would cause a fish heart to slow down?

Block's lab used individual heart cells from tuna to show that PAHs in oil can interrupt the electrical signals that are essential for fish hearts to beat effectively. So far, the scientists think this can happen to embryos — and possibly to young fish — at low concentrations.

"What we're doing is applying the science of the Exxon Valdez and taking it into 21st-century methodologies," Block says.

Discovering the mechanism that makes oil toxic to fish is like a coroner pinning down a mysterious cause of death — but taking 25 years to do it. And, as in a criminal case, this knowledge could give scientists evidence to hold companies responsible for long-term damages no one ever knew oil spills were causing.