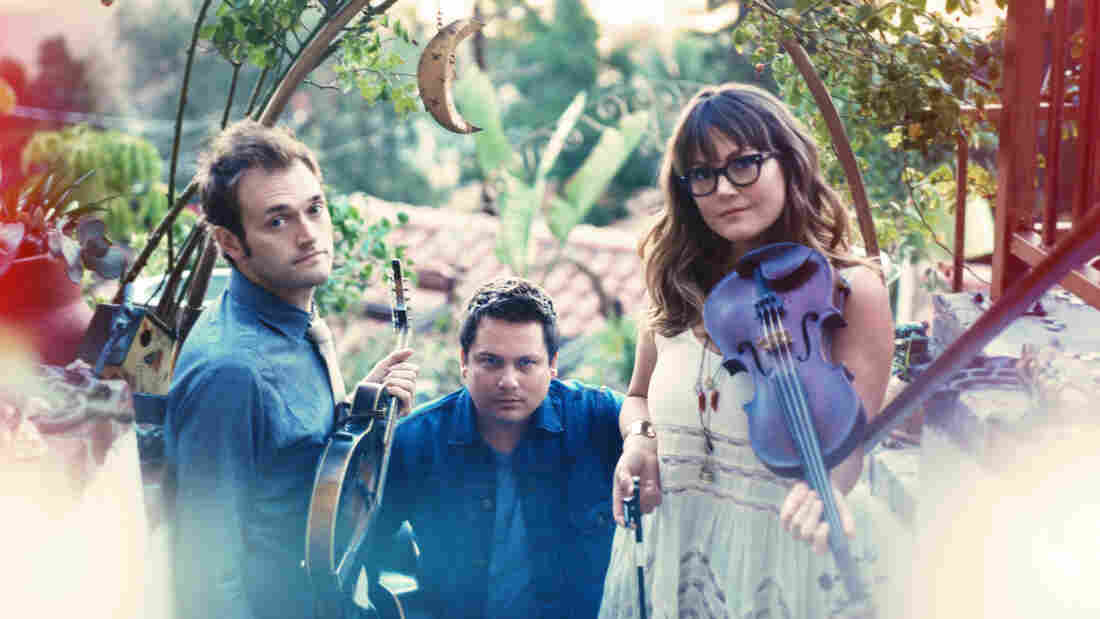 "I think we're more grown-up now, to use an extremely childlike term," the violinist Sara Watkins recently told a reporter who asked what had changed in the eight years since Nickel Creek — the trio of Watkins, guitarist Sean Watkins (her brother) and mandolinist Chris Thile — released a studio album. Watkins' words astutely acknowledged the expectations leveled at the former child prodigies, who wowed bluegrass and country fans with three precocious albums in the early 2000s. In full adulthood, they've forged major separate careers, leading bands of their own and earning buckets of accolades. There's no doubt that the virtuosity and vision of each Nickel Creek member has intensified. But could Watkins, Watkins and Thile, now in their 30s, match the liveliness and brash bravado of those baby-band years?

That's only a fair question if joyfulness and spunk are accepted as attributes best displayed in youth. A Dotted Line is, in fact, more adventurous than Nickel Creek's earlier work, and more expressive of each player's strengths. Written in the New York apartment which serves as base camp for Thile's definition-defying excursions (the guy's done Bach, rock, old-timey country and avant-bluegrass, for a start) and produced in Hollywood by the band's favorite rocker, Eric Valentine, A Dotted Line maintains a powerful focus even as it ranges stylistically. Each member displays how she or he has come to understand the marriage of emotion and chops, pop appeal and deep musical knowledge, that Nickel Creek represents. And each listens profoundly to the other throughout the process, striving for real equality — a rare achievement among three such dominant players, and extending to the album's occasional guests, the bassists Edgar Meyer and Mark Schatz.

Sean Watkins provides Nickel Creek's backbone. The songs he guides, like the gospelized jump-up "21st of May," spar comfortably with tradition, and his guitar playing is a floating anchor throughout A Dotted Line. Thile has the glamour of a heartthrob, and he sings with swagger in the album's breakout power-pop number, "You Don't Know What's Going On," and its most headily poetic ballad, the heartbreaker "Love of Mine." (Come to think of it, both songs are heartbreakers.) Moving between her brother's earth and her compatriot's air like the woman thrown aloft on the album's cover, Watkins is the listener's close companion. Her fiddle lines are warmly authoritative, her voice always certain of the direction it takes even at its most vulnerable, as in her pensive reading of the Sam Phillips song "Where Is Love Now?" — so distinct from Jimmie Dale Gilmore's equally definitive version.

Intuitive cooperation is what makes Nickel Creek so special. It's in the way Thile's mandolin runs launch or follow Watkins' fiddle parts in instrumentals like "Elsie," and in the band's harmonies, which breathe in sync the way family harmonies so often do. At the end of the doleful lover's story "Christmas Eve," each singer takes up the phrase, "It's not all over yet" in a spontaneous not-quite-round, bending the notes toward a minor key and lifting the lines back up — almost clashing, but always just resolving, like one hurt brain determined to keep its swirling thoughts in order. It's remarkable, showing how three distinct voices can come together in the service of expressing how one person can feel many things at once.

Can Nickel Creek still have fun? Check out "Hayloft," a 2008 song about barnyard nookie by Mother Mother, dubbed by some as the second-most hated band in Canada. In the hands of the Watkins siblings and Thile, this oddity becomes a romp with chops. The always-astounding drummer Matt Chamberlain taps out a Devo-worthy beat while everyone else channels a favorite New Waver: The B-52's here, David Byrne there. It's tight, it's masterful; it's totally grown-up. But it's also a blast.