Accessibility links
'New Yorker' Cartoon Editor Explores What Makes Us Get It Humor is both a creative and a cognitive process, says Bob Mankoff, who has contributed cartoons to The New Yorker since 1977. His memoir is called How About Never — Is Never Good For You? 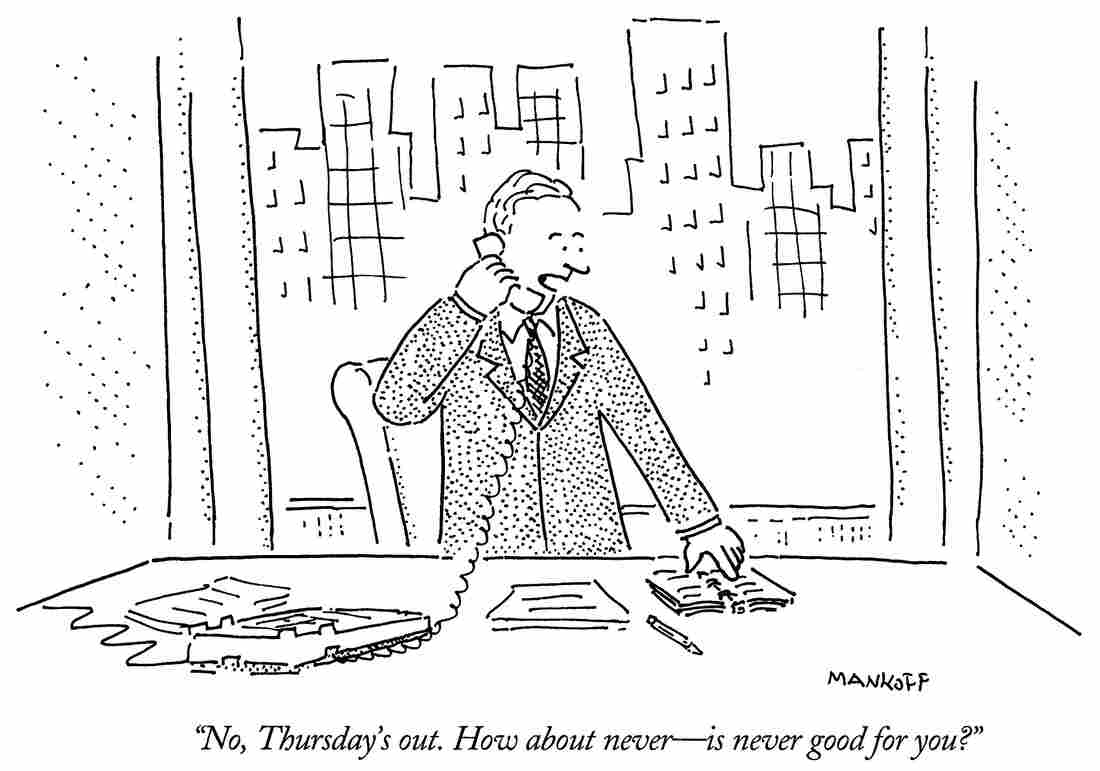 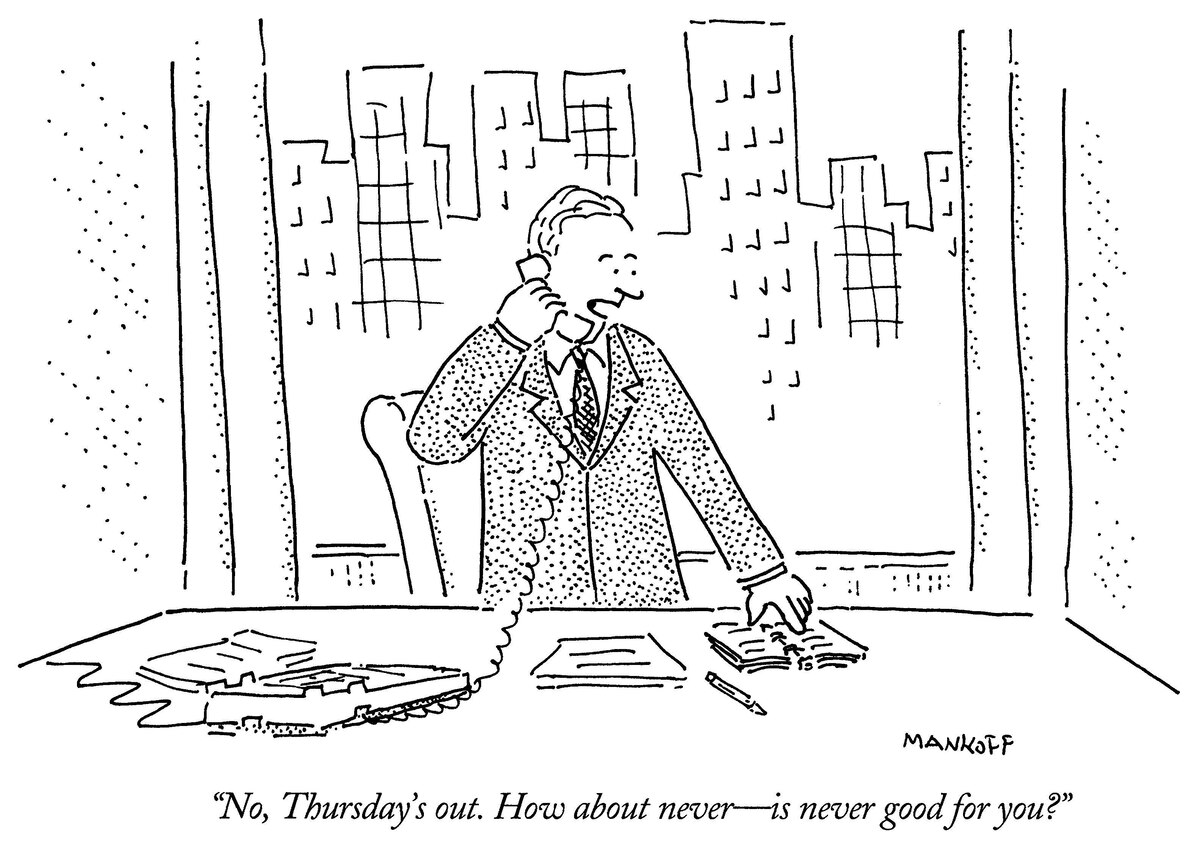 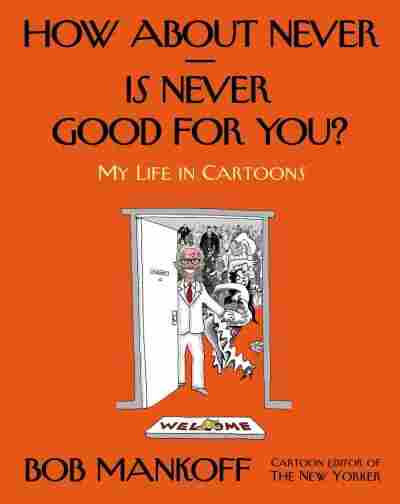 How About Never - Is Never Good for You?

My Life in Cartoons

Title
How About Never - Is Never Good for You?
Subtitle
My Life in Cartoons
Author
Bob Mankoff

Bob Mankoff has been contributing cartoons to The New Yorker ever since 1977 and now, as cartoon editor, he evaluates more than 500 cartoons submitted to the magazine each week.

Mankoff is proud of the many cartoons that have been published under his aegis. "Sometimes I take my aegis out of my drawer just to admire it," he writes.

His most well-known cartoon shows an executive looking at his desk calendar, saying to someone on the phone: "No, Thursday's out. How about never — is never good for you?"

The idea came to him during a phone call with a "friend" who couldn't seem to find the time to get together, Mankoff tells Fresh Air's Terry Gross. "I kept saying, Could we do it this time? Could we do it that time? And then I got exasperated with him and said, 'How about never? Is never good for you?' So, it was really a snotty line."

When he adapted that quip into a cartoon, he "switched the position so that the guy saying it is in a position of superiority ... because it makes it funny," he explains.

He submitted that cartoon to The New Yorker in 1993. "It turned out to be one of the most reprinted cartoons in New Yorker history," he says. "I don't think most people know what's going to be in their obituary, but I do."

That caption is now the title of his new memoir, a book that traces his circuitous path to cartooning and the psychology of cartoon humor.

Humor itself and your response to humor — that's one of the things I learned in doing this job and even writing this book, especially the caption contest — is very, very, varied and there's a huge amount of variability between subjects and there's even great variability within a person. ...

What we do is after we look through all 5,000 [submissions] — and usually it's my assistant ... categorizes them in all the different ways the jokes are made and I pick, maybe [10 or so.] I use SurveyMonkey and I send it out to the New Yorker editors and ... the responses incredibly vary. At that point, it's this crowdsourcing. You know what? I'll tend to go with the one the crowd likes at that point. 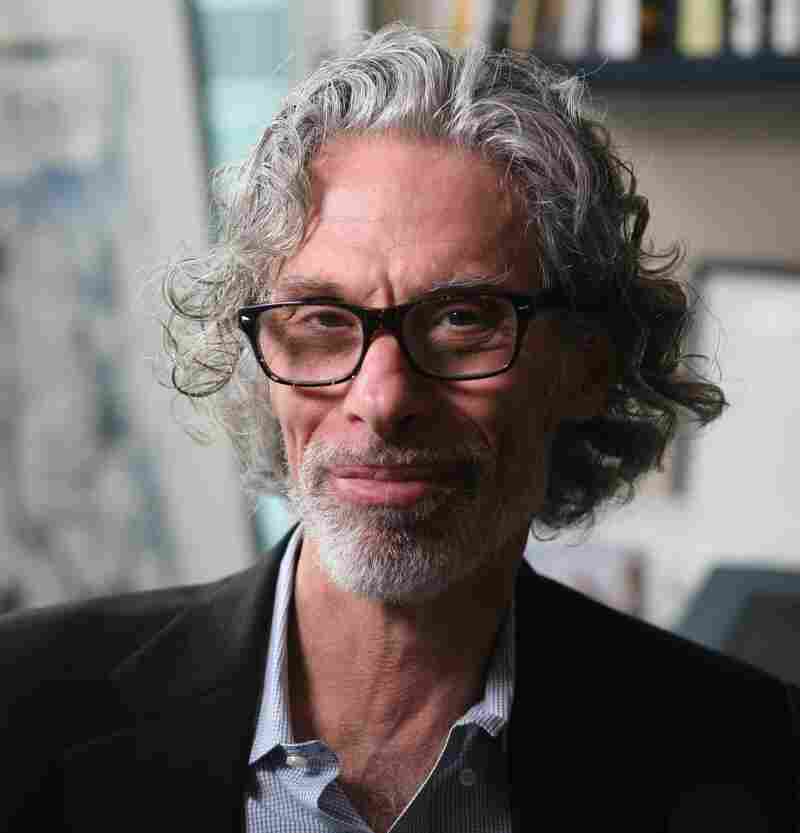 Bob Mankoff was a cartoonist for The New Yorker for 20 years before becoming the magazine's cartoon editor. He is the founder of the online Cartoon Bank and is also the author of The Naked Cartoonist. Davina Pardo/Henry Holt and Co. hide caption 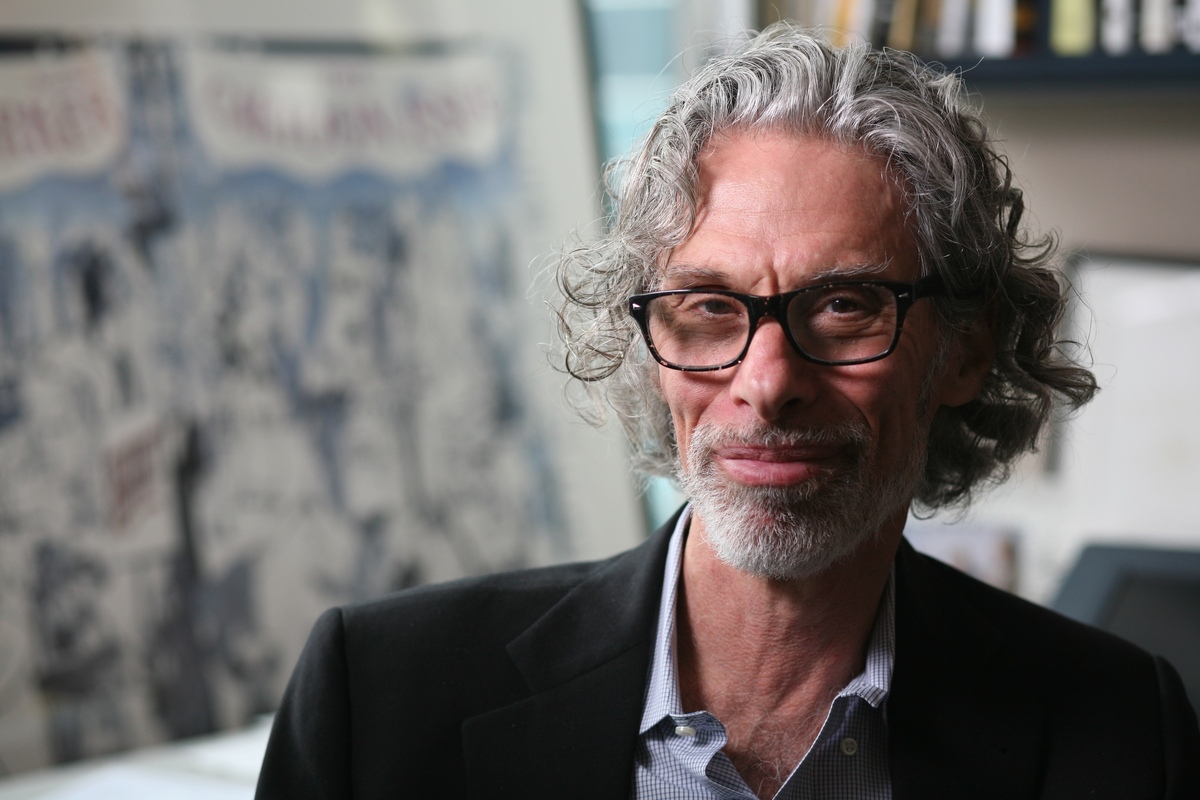 Bob Mankoff was a cartoonist for The New Yorker for 20 years before becoming the magazine's cartoon editor. He is the founder of the online Cartoon Bank and is also the author of The Naked Cartoonist.

She was so picky that when she went to a restaurant she'd give these incredible orders, detailed, and even before the food would get to the table she would reject it — like an anti-missile system. ... I was completely embarrassed, but embarrassment is the mother's milk of humor. Embarrassment at one time, humor later. Anything that's embarrassing is potentially funny. I think what Jewish culture taught me ... is all these embarrassing things, all these guilt-filled things, all these anxiety-filled things are material.

On the psychology of humor

I did this interesting study in which we did eye-tracking as people looked at ... different types of cartoons. Sometimes the cartoons were just verbal cartoons and sometimes they had a visual element and we watched their eyes and the moment that they get the cartoon their pupil expands almost like it would for a flashbulb. So we can track the actual "get it moment." That's the type of research I'm interested in. ...

It means that humor is a cognitive process. It's a creative process not only on the part of the cartoonist, but on the part of the viewer. And I think that's very interesting because that will be analogous to the "a-ha moment" in scientific invention or when you get a crossword puzzle. Arthur Koestler wrote a book called The Act of Creation in which he connected humor and science and art and so I think one of the things [our study] shows is that they are all connected.

Read an excerpt of How About Never - Is Never Good for You?