Accessibility links
Why Oil Drilling Is Both Safer And Riskier Since Exxon Valdez The 1989 oil spill prompted changes in oil industry regulation and spill research. But oil companies today are working in more remote places than ever, from the Arctic to deep below the ocean floor. 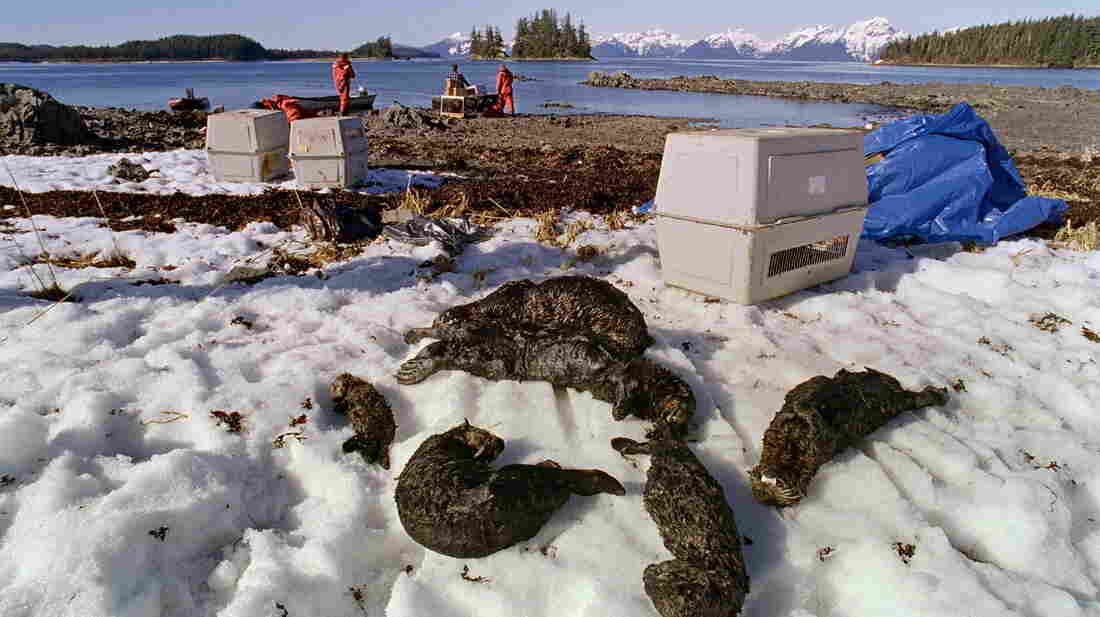 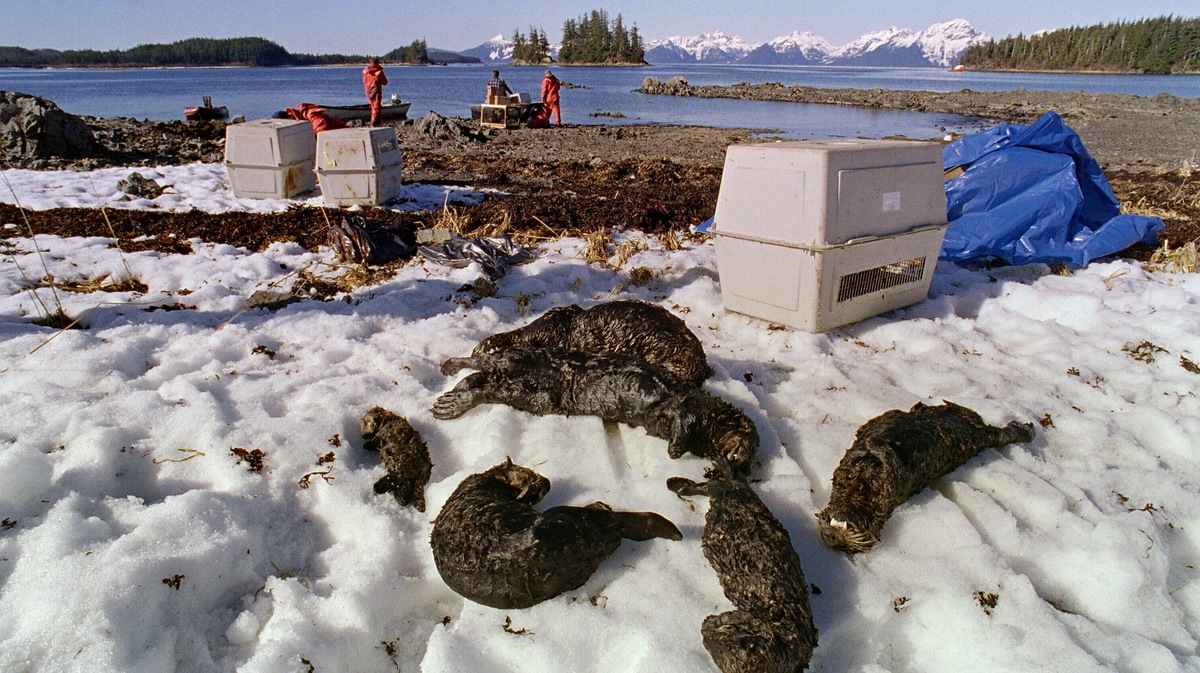 A lot has changed for the energy industry since the Exxon Valdez hit a reef in 1989 and began spilling oil into Alaska's Prince William Sound. The outcry over images of oil-soaked wildlife and a once-pristine shoreline dirtied by crude ushered in greater scrutiny of oil operations and increased interest in research on how to clean up oil spills.

But while regulation may be tighter and spill response more robust today, companies are working in more challenging environments than they were 25 years ago. Fracking shale underground and drilling in remote places like the Arctic and below the ocean floor, experts say, also mean a greater risk of accidents.

Just before the Exxon Valdez disaster, domestic support for oil spill research had waned. The federal government had shut down an outdoor testing lab on a naval base in Leonardo, N.J.

But the Oil Pollution Act of 1990 ordered the facility and its 667-foot-long saltwater pool reopened. Today, Ohmsett, the National Oil Spill Response Research and Renewable Energy Test Facility, is busier than ever. The crew is working year-round — even importing ice to simulate Arctic conditions.

"We're at about 85 to 90 percent capacity at this moment," says Paul Meyer, program manager with federal contractor MAR Inc. "We're running, almost every week, a different test and a different scenario." 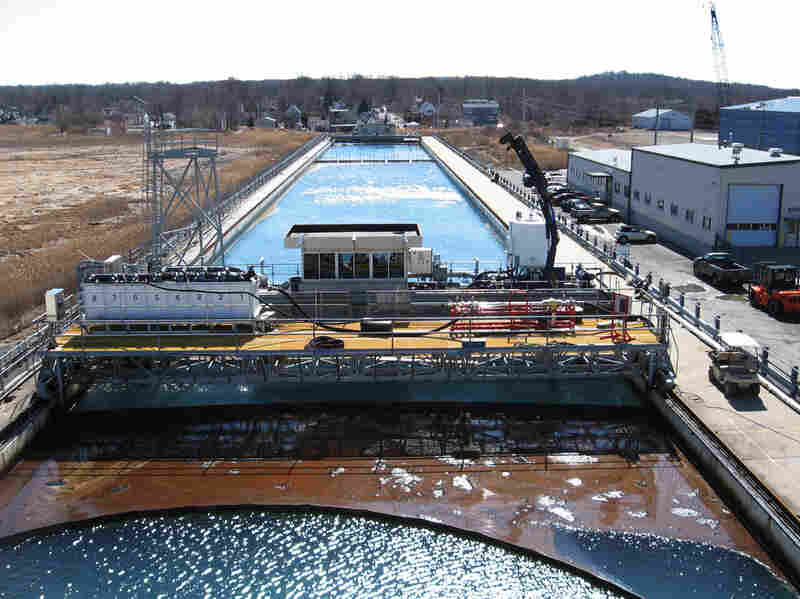 The Ohmsett research facility, which researches oil spill response, was closed just before the Exxon Valdez accident. It was reopened as part of the measures included in the Oil Pollution Act of 1990. Jeff Brady/NPR hide caption 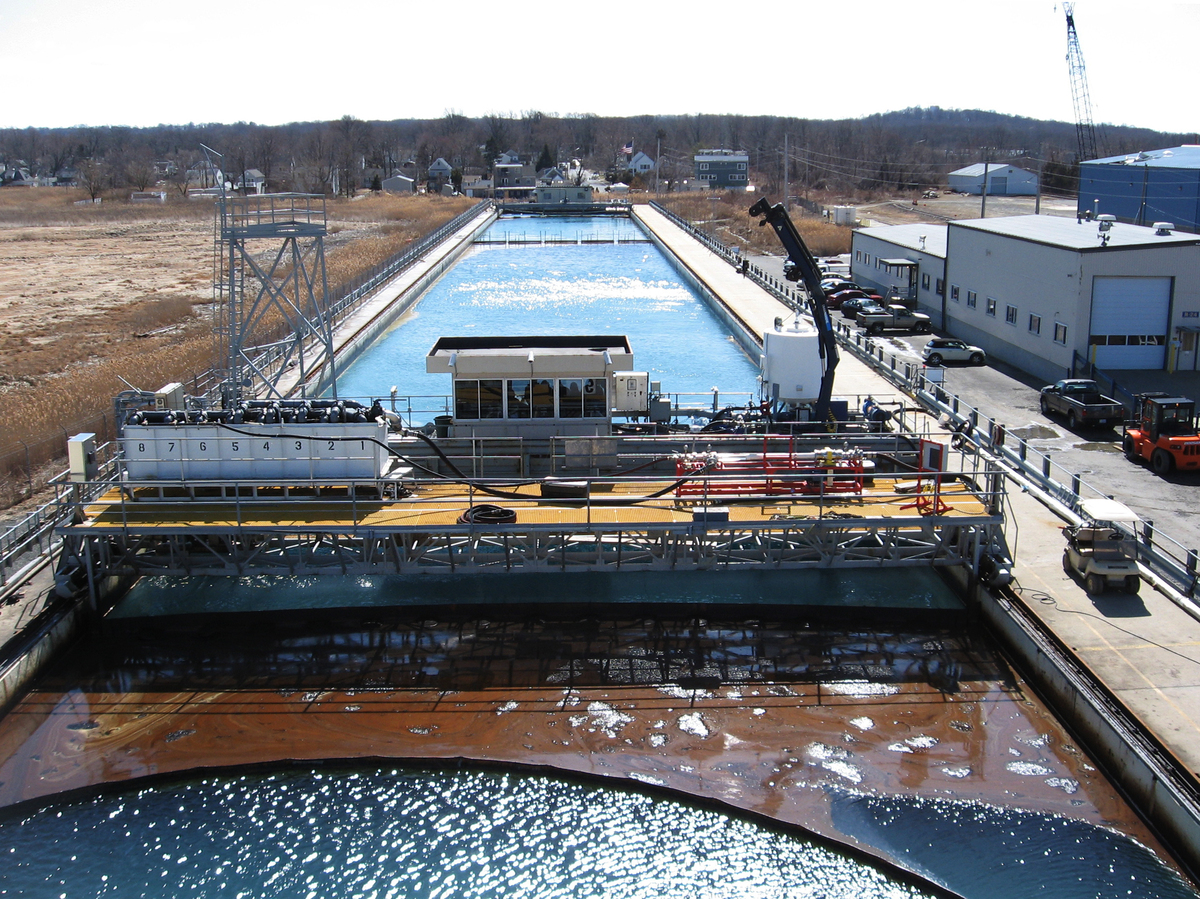 The Ohmsett research facility, which researches oil spill response, was closed just before the Exxon Valdez accident. It was reopened as part of the measures included in the Oil Pollution Act of 1990.

A Sea Change For Safety Measures

The captain of the Exxon Valdez, Joseph Hazelwood, had been drinking the day of the accident. Now, ExxonMobil requires drug and alcohol testing, and people with a history of substance abuse are not allowed in what the company calls "safety-sensitive positions."

Another change since 1989: Two tug boats are now required to navigate tankers through Prince William Sound.

"Simply put, safety is the first priority for our company. It has been ever since then and it continues to be that to this day," says Keil.

The historic spill also prompted regulatory changes and new laws, including the Oil Pollution Act that re-opened the New Jersey testing lab. Lois Epstein, an engineer and Arctic program director for The Wilderness Society, says the law has contributed to a decline in tanker and barge spills nationwide.

OPA '90, as industry insiders call the act, banned single-hull tankers from U.S. waters (the Exxon Valdez was such a ship). Tankers today have stronger double hulls that can better withstand an accident.

The law also said that companies responsible for a spill must pay. Right now, the government is considering raising the liability cap for offshore facilities from $75 million to $134 million.

"One of the things we'd like to see is an unlimited liability," Epstein says. "If you cause a problem, you should have to pay to address it."

The biggest regulatory changes to the oil industry came after BP's 2010 oil spill in the Gulf of Mexico. Old agencies were replaced by new ones with stronger mandates and more funding.

Among the new entities is the federal Bureau of Safety and Environmental Enforcement. While BSEE sets rules for offshore drillers, director Brian Salerno says he's also focused on changing the culture of oil companies.

"Regulations will only get you so far. We have to do more," says Salerno, who says he wants every oil company to create a "safety culture."

"I would define a 'safety culture' as the behavior that people exhibit when nobody is looking over their shoulder," Salerno says. That's a big change from 1989 when production and drilling were the industry focus.

When there's a spill, says the Wilderness Society's Epstein, usually only a small percentage of the oil is recovered — which means environmental damage can last for decades.

That's important when you consider this: Oil companies today are working in more challenging environments than they were two decades ago. 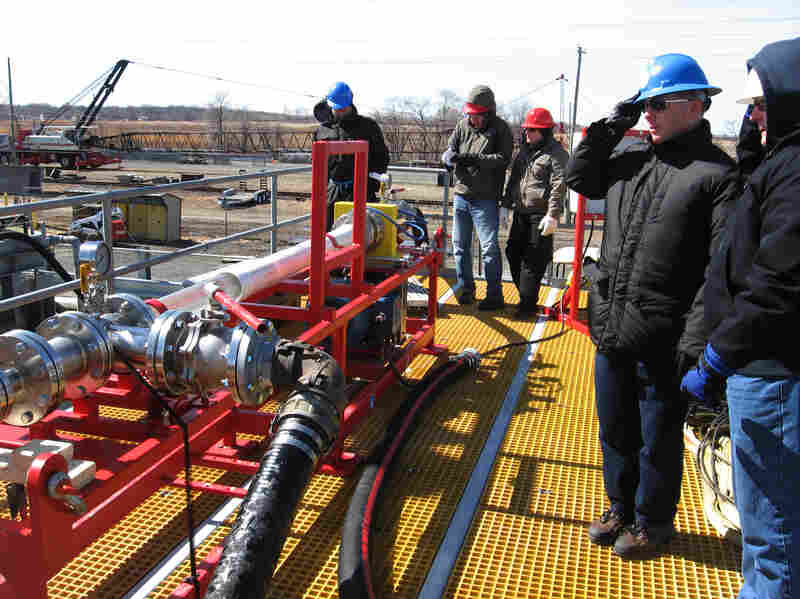 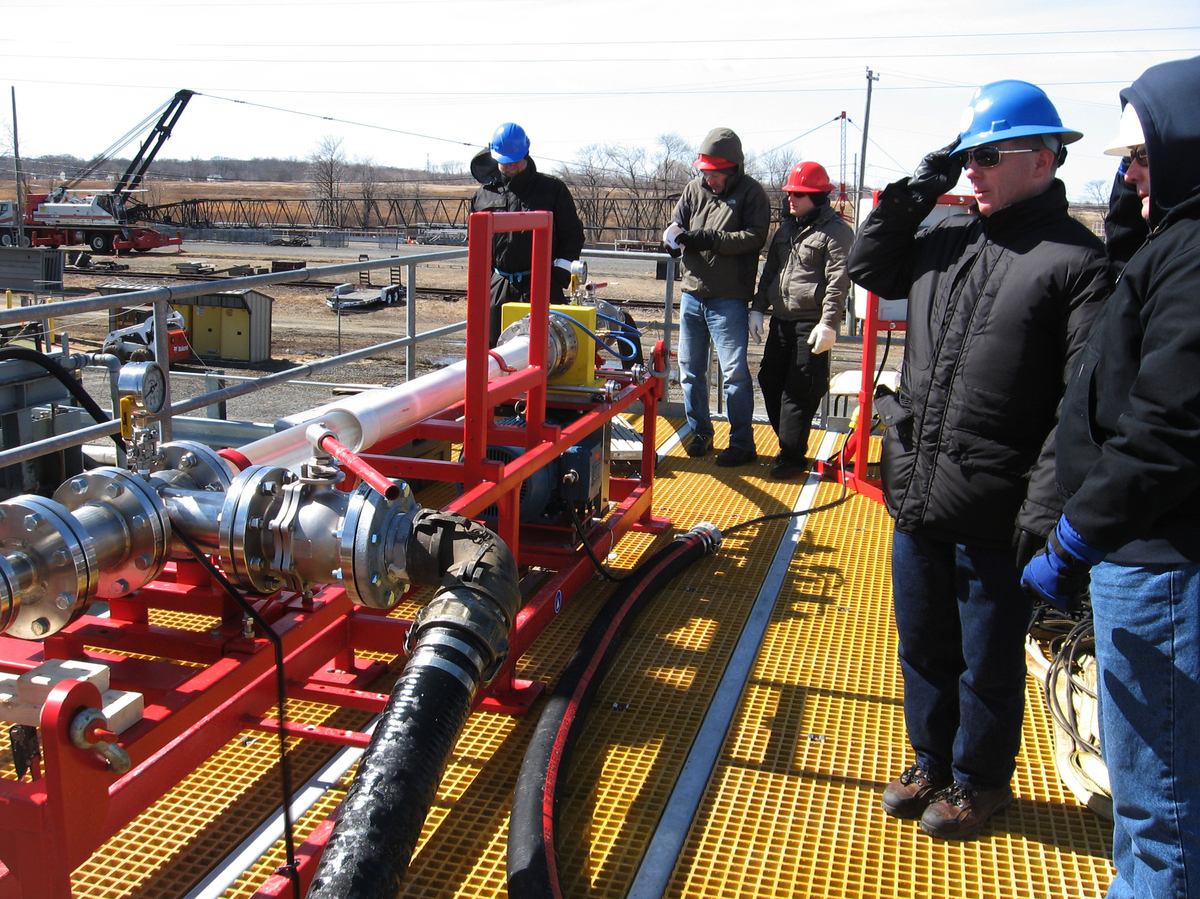 Just about all of the oil that's easy to drill for is gone or controlled by state-owned companies in places such as Saudi Arabia or Venezuela. That leaves the oil that's accessible to private corporations in hard-to-reach places, such as below the ocean floor, deep underground or in the Arctic.

"The days of being able to easily access resources are largely behind us," says ExxonMobil's Keil. He says his company takes safety in these more challenging environments very seriously.

He points to a project that was shelved in 2006. ExxonMobil had spent $187 million drilling a deep-water well in the Gulf of Mexico. It looked like a rich find with lots of oil, but there were indications that continuing to drill the well might not be safe.

"So, in spite of having spent nearly $200 million on this project, it was one we turned our back on and walked away from," Keil says. "We took a lot of heat from our shareholders at the time, but it was absolutely the right thing to do."

But that approach is difficult to maintain, especially if it's been a long time since a company last had an accident.

"Sometimes we get a little cocky about how good things are going and then think, 'Oh no, we don't have to worry — we've got this one nailed,' " says Nancy Kinner, professor of civil and environmental engineering at the University of New Hampshire.

That challenge is compounded with the drilling booms happening around the country in places like North Dakota. "On the one hand, we now have better technology to minimize the risk, but we have more activity occurring," says Kinner. That increased activity also increases the chances an accident will happen.

The oil industry is spending heavily to convince the public and regulators it can safely drill in these places. Companies like ExxonMobil, Chevron, ConocoPhillips and Shell are investing more than $1 billion in the Marine Well Containment Co.

The centerpiece of the company's response capability is a 100-ton stacking cap that can be placed over an out-of-control well on the ocean floor. The cap then diverts the leaking oil to tankers above.

It's similar to the device that brought BP's gusher in the Gulf of Mexico under control in 2010. But whereas that one had to be built from scratch while the well was still leaking, this one is ready to deploy.

"That technology existed prior to the Gulf oil spill, but it was never really a requirement for deep-water operations," says BSEE director Salerno. "It is now."

And Salerno has another plan to improve safety. He's taking cues from airlines, which have improved their record dramatically in recent decades. He wants to collect data about "near misses."

"There's a great body of knowledge that we could potentially obtain if we were able to capture near-miss," Salerno says. "What almost went wrong? And what prevented it from going wrong?"

Salerno says his agency is working on a way to collect that data now, hoping it will help avoid catastrophic accidents in the future.