Accessibility links
Debate: Does Affirmative Action On Campus Do More Harm Than Good? Colleges that use race as a factor in admissions say the approach creates opportunity for students who might otherwise be excluded. Critics argue the practice hurts the students it's intended to help.

Listen
Debate: Does Affirmative Action On Campus Do More Harm Than Good? 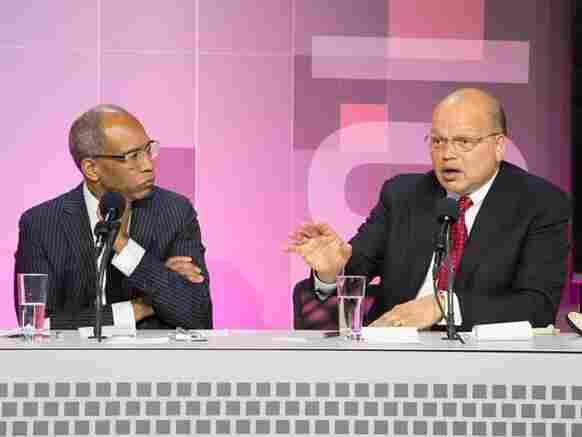 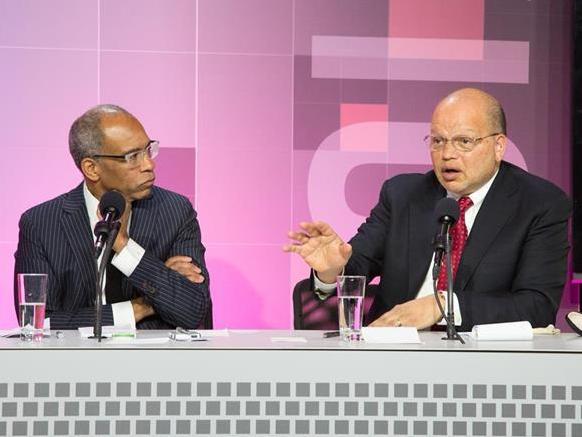 Many colleges and universities use race as a factor in admissions, but the approach has been a hot-button issue for decades — even making its way to the Supreme Court several times since the late 1970s.

Proponents of affirmative action in admissions say the policies help create more diverse campuses, which better prepares all students for life after school — particularly as the United States becomes increasingly diverse. Schools with well-designed policies, supporters say, make special efforts to identify talented, underrepresented candidates who are qualified for college work but who might otherwise lose out in competition for admission with more privileged students.

In an Intelligence Squared U.S. event, two teams recently debated the motion, "Affirmative action on campus does more harm than good." In these events, the team that sways the most people by the end of the debate is declared the winner.

Before the debate at Harvard Law School in Cambridge, Mass., 22 percent of the audience voted in favor of the motion and 48 percent against, with 30 percent undecided. Afterward, 36 percent agreed with the motion, while 55 percent disagreed — meaning the side arguing for the motion swayed the largest number of people to win this particular debate. 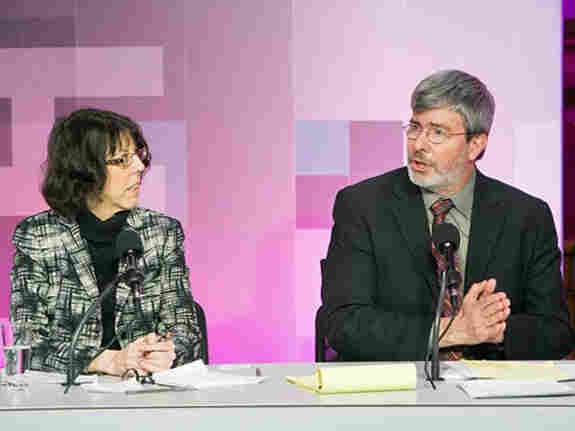 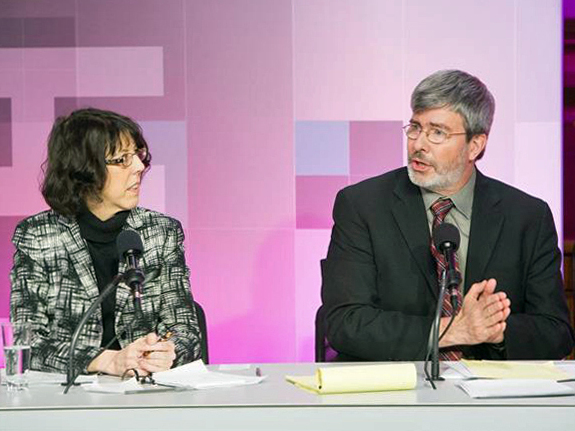 Randall Kennedy teaches law, including courses on the regulation of race relations, at Harvard Law School. He served as a law clerk for former Supreme Court Justice Thurgood Marshall. He's the author of several books, including For Discrimination: Race, Affirmative Action, and the Law and Race, Crime, and the Law, for which he was awarded the 1998 Robert F. Kennedy Book Award. He also writes for a wide range of scholarly and general interest publications.

Theodore Shaw teaches professional practice in law at Columbia Law School. He was the president of the NAACP Legal Defense and Educational Fund, for which he worked in various capacities over the span of 26 years. Shaw started as a trial attorney in the U.S. Department of Justice and he has litigated voting rights, housing, police misconduct, capital punishment and other civil rights cases. While a professor at University of Michigan School of Law, he played a key role in initiating a review of the school's admissions practices and policies.

Gail Heriot is a member of the U.S. Commission on Civil Rights and teaches law at the University of San Diego. Before she started teaching, she practiced law in Chicago and in Washington, D.C. She has served as civil rights counsel to the U.S. Senate Committee on the Judiciary. Heriot is the editor and an author of a forthcoming anthology of essays, California Dreaming: Race, Gender, Proposition 209 and the Principle of Non-Discrimination. She has also been published in the Harvard Journal on Legislation, The Wall Street Journal and National Review, among others.

Richard Sander teaches law at the UCLA School of Law and has been working on questions of social and economic inequality for much of his career. In 2005, he published the first broad analysis of the operation and effects of racial preferences in legal education. Sander is the co-author of Mismatch: How Affirmative Action Hurts Students It's Intended to Help, and Why Universities Won't Admit It. In the 1990s, he worked primarily on issues related to fair housing, housing segregation, and economic inequality.