Accessibility links
Voting Rights Fight Takes New Direction Voting rights activists say they're seeing a change in the debate this year — fewer new restrictions and, in some places, a hint of bipartisanship. 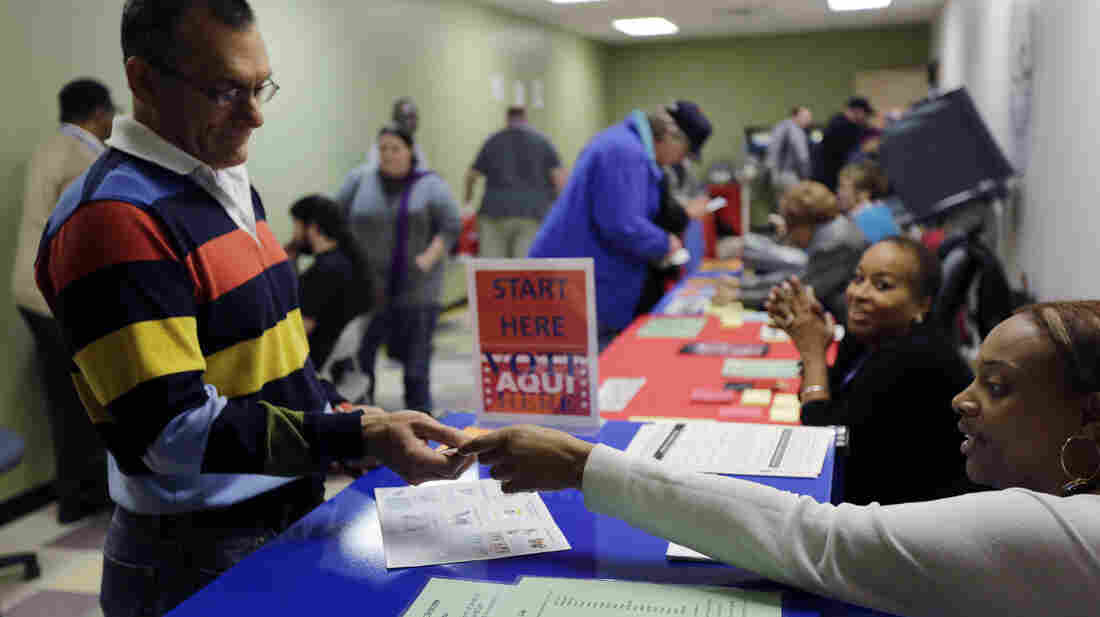 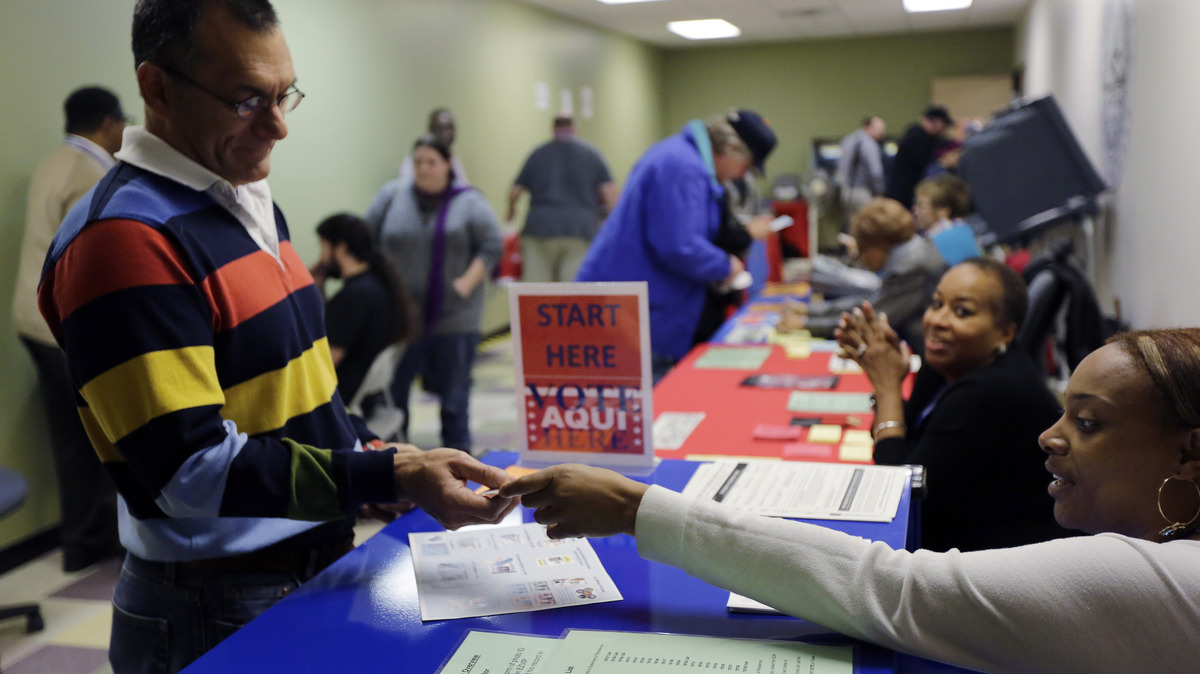 An election official checks a voter's photo identification at an early-voting polling site in Austin, Texas.

It's that time again, when primary voters start casting their ballots for the midterm elections. As in recent years, voters face new rules and restrictions, including the need in 16 states to show a photo ID.

But this year, some voting rights activists say they're seeing a change — fewer new restrictions and, in some places, even a hint of bipartisanship.

Although that wasn't the case last month in Ohio, when the Legislature voted along party lines to eliminate a week of early voting. Lawmakers also agreed to prevent local election officials from mailing out unsolicited absentee ballot applications.

"We're talking about disenfranchising thousands of folks," Democratic state Rep. Alicia Reece said on the House floor. "And don't tell me it can't be done, because our history has shown it has been done."

But Republican state Rep. Andrew Brenner defended the changes, saying they were needed to ensure that election results in the state were reliable.

"I've got a concern that there could be voter fraud. And just because you don't see it doesn't mean it isn't happening," he said.

A similar, emotional debate was heard last week in Wisconsin, where the state Assembly agreed to eliminate weekend voting, popular with many minority voters. Backers of the legislation said weekend voting was a burden for election offices in smaller, rural areas. After the bill was approved, a spectator in the gallery shouted out "racists" and "white supremacists."

But Myrna Perez of the Brennan Center for Justice at New York University says Ohio and Wisconsin are the exceptions this year rather than the rule.

"We've seen a lot of real momentum in 2014, thus far, towards improving our elections both at the states and nationally," she says.

Perez is encouraged that a bipartisan presidential commission just came out with recommendations on ways to fix long lines at the polls. And that there's a bipartisan effort in Congress to revise the Voting Rights Act after the U.S. Supreme Court struck down an important section.

And, Perez adds: "We've seen promising bipartisan developments in Nebraska, Massachusetts and Kentucky on a wide variety of issues, ranging from online registration to early voting to restoring voting rights to persons with criminal convictions."

In fact, she notes, the restoration of voting rights for felons has won the backing of people as politically diverse as U.S. Attorney General Eric Holder and Kentucky Republican Sen. Rand Paul.

Still, there's a lot in flux. Court challenges have blocked new voter ID requirements for now in Pennsylvania and Wisconsin. But a Supreme Court decision last year opened the way for other states, like Texas and Mississippi, to go ahead with their new ID requirements.

And a court ruling last week allowed Kansas and Arizona to require new voters to show proof of citizenship, although that decision is expected to be appealed.

"If the question is will voters have more or less access to the polls, I think the answer is yes, depending on where they're from," says Doug Chapin, an election expert with the University of Minnesota.

Chapin thinks that one reason there are fewer new restrictions this year is that states that were inclined to enact things like voter ID have already done so. He says now states and the courts are focused on working out the kinks.

"The big story in this cycle with ID is the lengths to which some states are going to make sure that people without ID get ID," says Chapin.

One good example, he says, is Mississippi, which has new photo ID requirements going into effect this June.

Delbert Hosemann, Mississippi's secretary of state, says officials are trying to do what they can to make sure that every voter can get an ID.

"We'll pick you up for free and take you to the circuit clerk's office. We offer free reviews and verifications of your birth certificate. And we'll issue a free ID," says Hosemann.

Hosemann says he studied other states' voter ID laws very carefully to avoid some of their mistakes. Many other laws have been challenged for placing too great a burden on elderly, poor and minority voters who don't have an ID and might have difficulty getting one because they lack documents such as a birth certificate.

"I feel like we've addressed all the issues that could come up and that would be an impediment to someone getting an ID," says Hosemann.

People like Perez, though, say that remains to be seen. Despite her optimism this year, she says her advocacy group and others will still monitor closely what happens at the polls.