Accessibility links
Movie Review: 'Boys Of Abu Ghraib' Writer, director, and leading actor Luke Moran imagines Abu Ghraib during its most notorious year, but misses the forest of corruption for the trees of his protagonist's personal story. 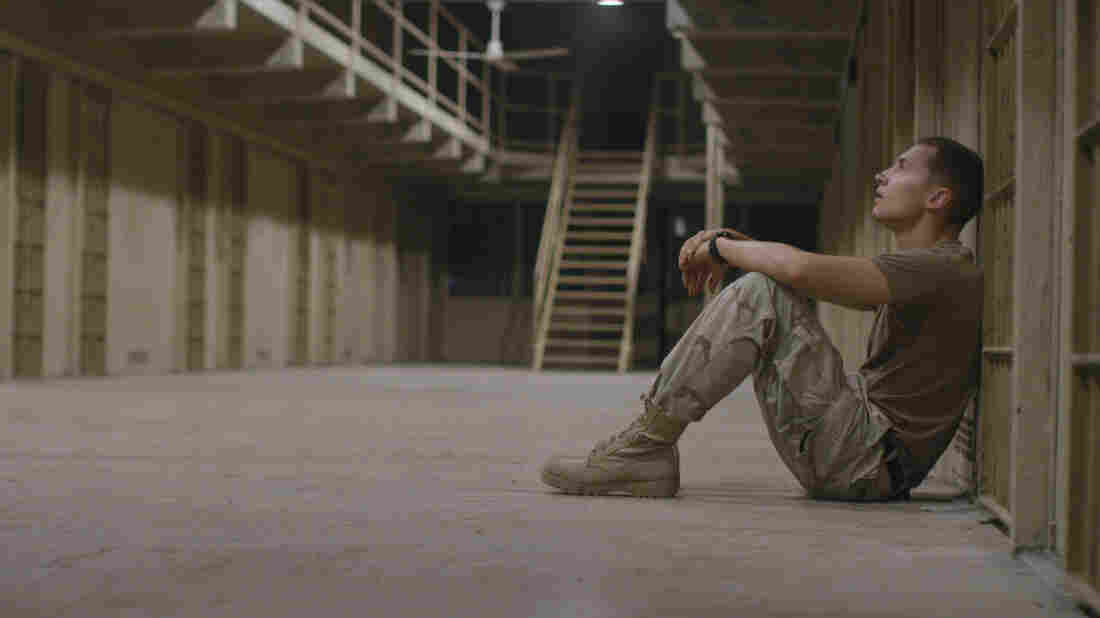 Essentially a one-man show, writer-director-star Luke Moran's Boys of Abu Ghraib observes a soldier's deployment at the prison during its most notorious post-Saddam year, 2003. As such, the movie works pretty well. But spotlighting a single GI sidesteps the group dynamic of what happened at the U.S.-run jail, where poorly supervised guards incited each other to behave in ways that were, at the least, unprofessional.

Jack Farmer (Moran) introduces himself in voiceover, preparing for a farewell party that just happens to occur on the Fourth of July. He's leaving his supportive father (John Heard) and loving girlfriend (Sara Paxton) in search of meaning and adventure. Next stop is Abu Ghraib, where his new commanding officer barks, "Within these walls, the war on terror will be won."

For Jack, though, fighting terror means working in the motor pool. The routine is punctuated only by mortar attacks and his unit's grisly barracks: They bunk where Saddam Hussain's sons used to supervise torture, and the blood stains and charred-flesh smells remain. There are no phones or running water, and promised leaves and redeployments are delayed or rescinded.

Bored, Jack volunteers for Military Police service at "the hard site," home to prisoners said to be "the worst of the worst." He's soon a witness to stress positions and other "enhanced interrogation techniques."

Jack is untrained as an MP, and receives only a cursory introduction to his new job from a veteran guard, Tanner (Sean Astin). It seems that the cynical Tanner will serve as a dramatic foil to the kind-hearted Jack, who instinctively recoils against mistreatment of the inmates. But Tanner soon disappears, and no significant character replaces him.

Instead, the focus switches temporarily to Jack's relationship with an English-speaking prisoner, Ghazi (Omid Abtahi). Guards are not supposed to speak to prisoners, but Ghazi is thoughtful and sympathetic, and Jack needs a friend. He assumes that the inmate is innocent, but later has cause to doubt that.

At one point, Jack arrives for his shift and replaces a female MP. But she's the only woman ever shown at the prison, and the party atmosphere documented in the infamous Abu Ghraib photographs is never invoked. In fact, Moran offers an alternative, and unpersuasive, explanation of how at least one of those photos was made.

But if Jack is just a regular guy, Abu Ghraib is not just another post. This is Taxi to the Dark Side territory, where questioning became torture, rape and sometimes murder. Compared to that harrowing documentary, Boys of Abu Ghraib looks like a protracted stay at a crummy summer camp. Jack's troubles feel real, yet they're merely a sidebar to the main story.