Accessibility links
Inside 'Regular Show,' Where Every Clip Is A Big Production The Emmy-winning cartoon is one bizarre and hilarious plot after another. For the show's creators, making each 11-minute episode is its own adventure. 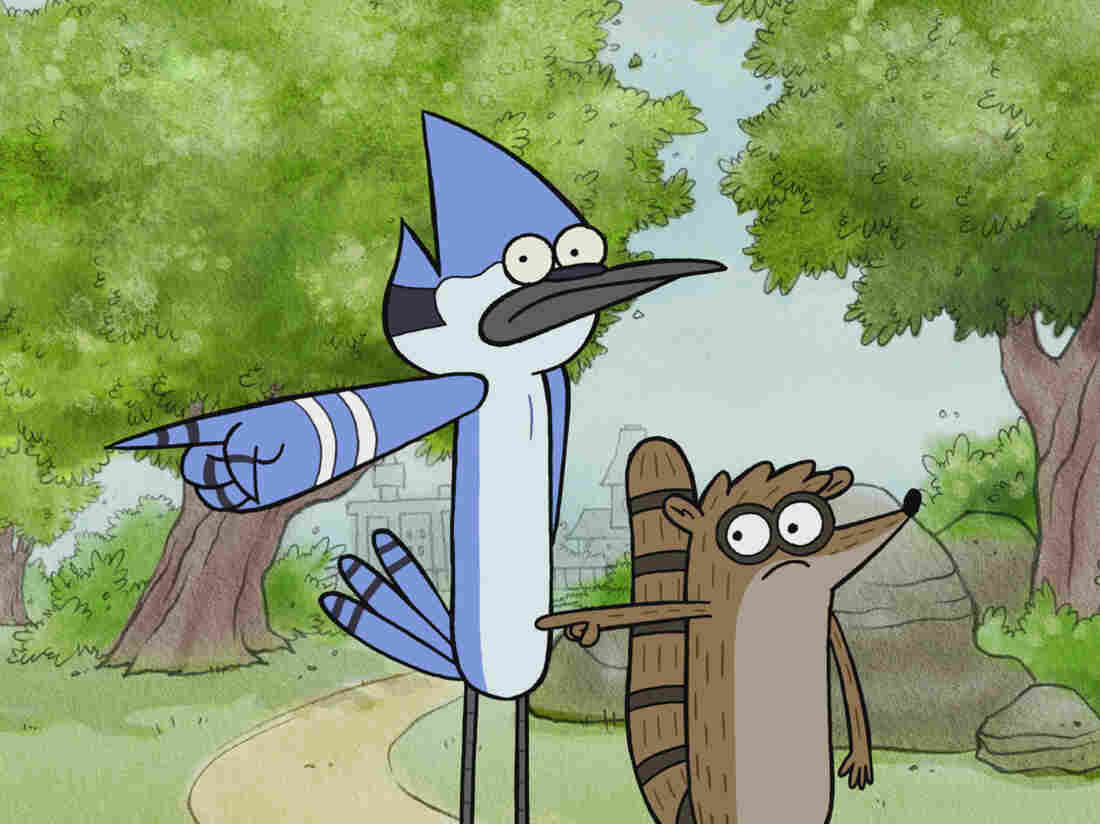 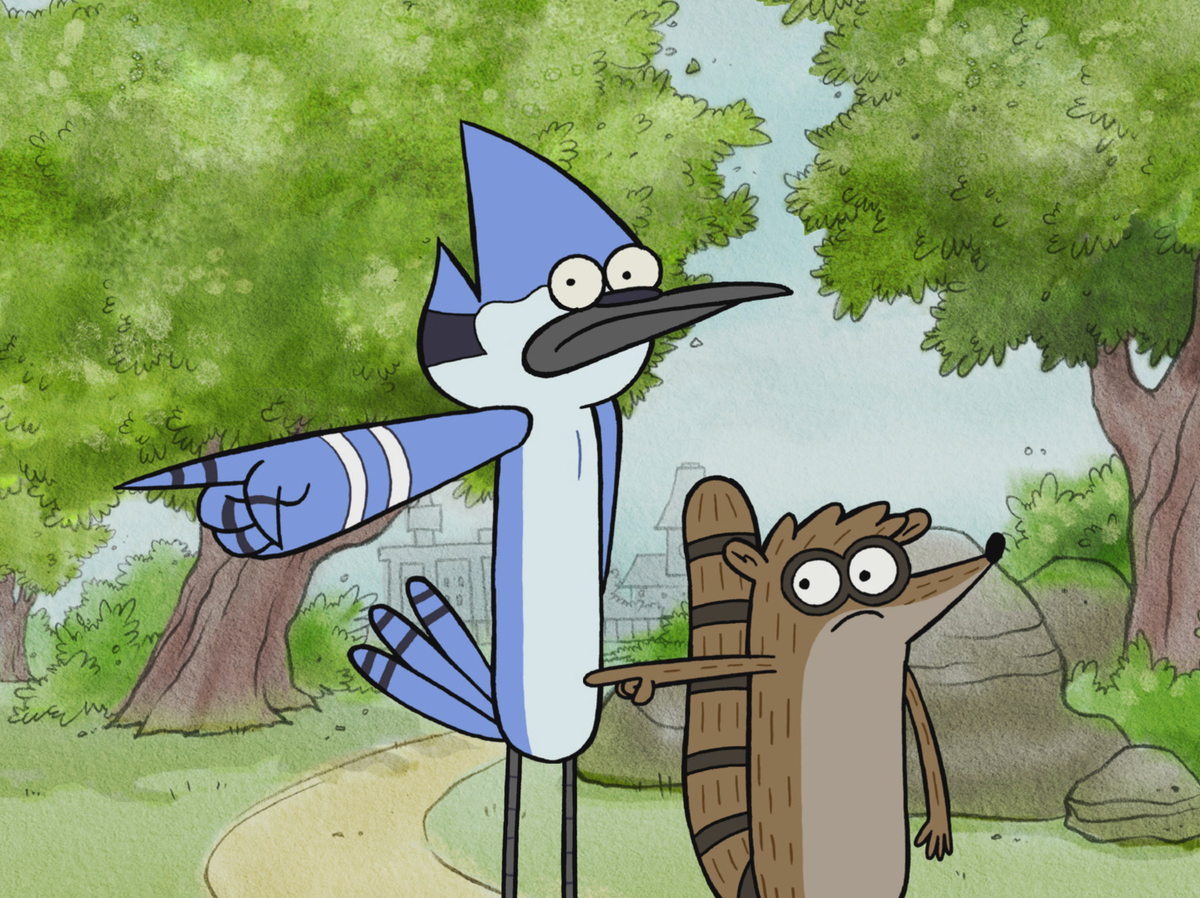 In its fifth season, Cartoon Network's Regular Show has gained fans of all ages. Each 11-minute episode of the Emmy-winning series starts with pencils and Post-it notes.

The Cartoon Network office in Burbank, Calif., is bustling with activity. Conference rooms are full of writers pitching new episodes, artists are busy sketching storyboards. On the Regular Show's floor, J.G. Quintel is playing a game of table hockey in the hall.

He's the creator of the cartoon, which is based around a blue jay named Mordecai — that he voices — and a raccoon named Rigby.

"It's all about their adventures and working a minimum-wage job at a park," Quintel says. 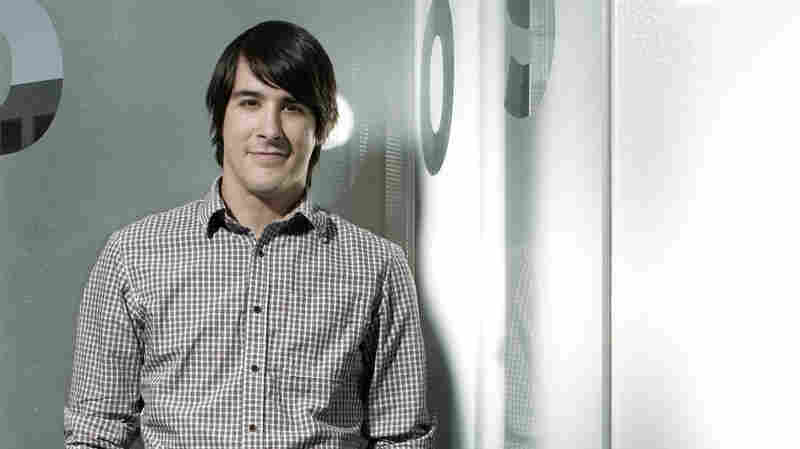 J.G. Quintel is the creator of Regular Show and the voice of one of its main characters, Mordecai. Cartoon Network hide caption 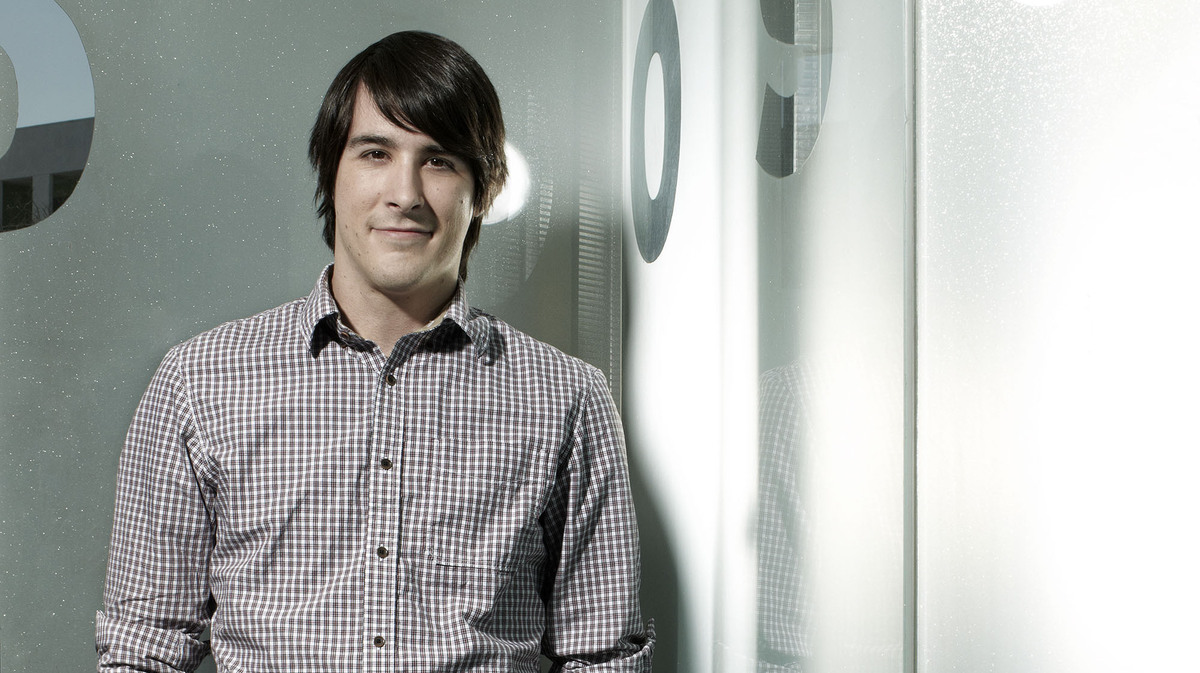 J.G. Quintel is the creator of Regular Show and the voice of one of its main characters, Mordecai.

Every episode starts off pretty normal. Their boss assigns them duties and Mordecai and Rigby reluctantly go off to work. Eventually, they get bored and get into mischief. That's when things get out of hand, from time travel to unleashing a monster out of an arcade game.

While the show's target demographic is kids, this isn't exactly a kid's show. According to Nielson Media Research, more than a quarter of the show's 2.6 million viewers are over the age of 18.

"Kids sometimes will walk in on their parents watching it without them and we hear about that on the Internet all the time," Quintel says. "That's exactly what we want."

Each episode is just 11 minutes long, but it's no small operation, Quintel says.

"It's very much an assembly line," he says. "Writers, storyboard artists, painters, character designers, prop designers." They have about 40 members on their team.

And it all starts with a pitch. The best ideas in the writers' meetings get sketched onto Post-it notes that cover the walls of their conference room. The story is refined and drawn into big booklets called boards. Quintel pulls one from his desk. It's like a thick comic book.

"One episode is 250 pages with two drawings on a page and all the writing is there," he says.

Those boards go to stylist Jessica Yost, who uses Photoshop to bring color into the stills.

"I'll put a background in and if there's a couple characters in there, I'll throw them in there so you can kind of get an idea of what that looks like," Yost says.

"She colors every little thing, if it's a pencil, a bag of chips, or the main character. Or an explosion," Quintel says. "We love explosions on the show; they're hilarious."

Meanwhile, animation director Robert Alvarez is in his office penciling in instructions onto what's called an exposure sheet. It's a long, lined document that provides detailed guidelines for the animators.

"This is their blueprint," Alvarez says. "You're telling them everything you want and hopefully you get it back that way."

Every movement of each character in every frame is accounted for. Alvarez logs nearly 16,000 frames per episode by hand.

"I had a bar room brawl where all the characters are fighting, and you see this long, wide shot of everything that's in it," he says. "So you have to break it down. One guy's throwing a punch with his left, another with his right, and you have to break all that action down and squeeze it in on the exposure sheets and make sure it makes sense."

From Burbank, all of the materials get sent to Seoul, South Korea, where it finally gets animated.

Outsourcing is common with American cartoons. Shows like The Simpsons, Family Guy and SpongeBob SquarePants have been doing it for years as a way to save on studio costs.

As for Regular Show, a single episode takes up to nine months to produce. The team usually has 20 episodes in production at once.

"To see at the end of it, all that work that goes into it," says Quintel. "And then for it to play for 11 minutes and be over. People are just like, 'Next one please!' And you're like, 'That was really hard to make.' "

But Quintel promises there are plenty more adventures in store for Mordecai and Rigby.