Accessibility links
Caught Between Russia And Ukraine, Border Cities Share Only Worry The buildup of Russian troops on Ukraine's border is unnerving residents to either side. Though sharply divided in opinion, all fear to lose ties of family and trade. 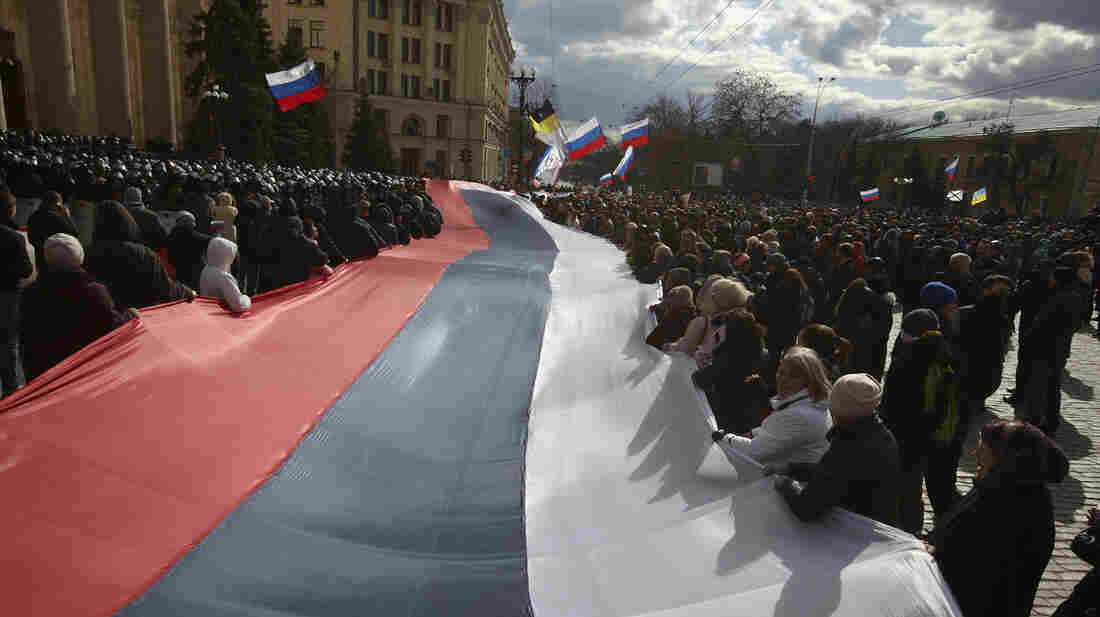 Demonstrators carry a giant Russian flag through Kharkiv, Ukraine, earlier this month. The city's population is a blend of Ukranians and Russians, many of whom share families across the Russian border. Sergey Kozlov/AP hide caption 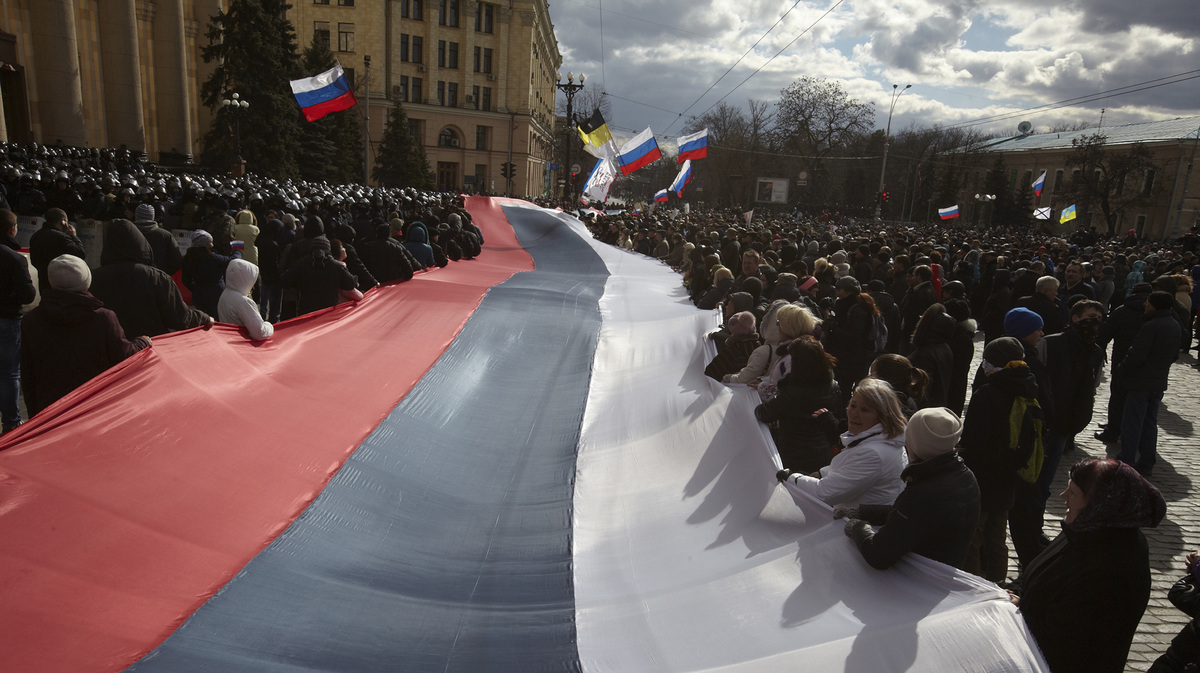 Demonstrators carry a giant Russian flag through Kharkiv, Ukraine, earlier this month. The city's population is a blend of Ukranians and Russians, many of whom share families across the Russian border.

The deployment of tens of thousands of Russian troops along their country's western border with Ukraine worries the new government in Kiev and its Western allies, including President Obama.

In a phone call Friday, he asked Russian President Vladimir Putin to pull those forces back, a demand likely to be repeated by Secretary of State John Kerry when he meets with his Russian counterpart in Paris Sunday.

But people in the Russian border city of Belgorod, one of the places where troops have been gathering, say they can't understand why the U.S. is making such a fuss.

Armored vehicles belonging to Russian paratroopers were recently spotted on a train crossing an overpass outside Belgorod.

A man who asked not to be identified because he feared police retribution says the military vehicles — which were headed toward the nearby border with Ukraine — took residents by surprise.

Obama And Putin Talk About Diplomatic Solution To Ukraine Crisis

"We only see paratroopers on national holidays," he says.

But resident Elena Gupalova says she's happy to have Russian soldiers nearby so they can protect Belgorod from the strife across the border.

The sales clerk says what's happening in eastern Ukraine is really terrible. She talks of right-wing extremists murdering people, which she heard about from friends who live in the Ukrainian city of Kharkiv, an hour's drive away.

"We want to feel calm and walk on our streets without fear," Gupalova adds.

She and others here say they also want stability for eastern Ukrainians, whom they call "brothers."

It's not just an expression, says Viktor Sapryka, who heads the Cross-Border Cooperation research center at Belgorod State University.

"I think 75 percent have relatives in Ukraine," Sapryka says. "Different political situation of course, but relations are the same because we have very close contact."

Sapryka says his parents, for example, live in Kharkiv and routinely cross into Russia to visit his grandparents in Belgorod.

He estimates that salaries in Belgorod, which is a key supplier of Russian pork products, are three to four times higher than in eastern Ukraine. The publisher says given flexible visa and work rules for Ukrainians in Russia, many of them come to his city to work.

Belgorod residents, on the other hand, go to Kharkiv to shop and eat at restaurants or visit night clubs, because it's a lot cheaper there, Shevstov says.

"We depend on each other and maybe it can change, but I don't think so," Shevstov says.

For now, there's a lot of nervousness in Belgorod. Thousands of Russian-speaking Ukrainians are reported to have moved in with relatives here. Border crossings in at least four nearby Russian towns and villages are said to be closed to all but bus and foot traffic.

At the main bus station in Belgorod, drivers say the number of Russians traveling to Ukraine is down by half.

One Ukrainian driver, who refuses to give his name, blames the new government in Kiev for his economic trouble and says he'd like to see eastern Ukraine go the way of Crimea and become part of Russia.

But none of the Russians interviewed by NPR want a military attack or annexation. Instead, what they hope is that Ukraine will become a loose federation with strong ties to Moscow.

That's why the West needs Russian help, he adds, if it wants to resolve the ongoing crisis.