Accessibility links
Amid Pushback, Colorado Gun Control Measure Goes On Trial Activists have sued to halt the state's ban on high-capacity ammunition magazines. The trial, which begins this week, leaves the law in limbo. 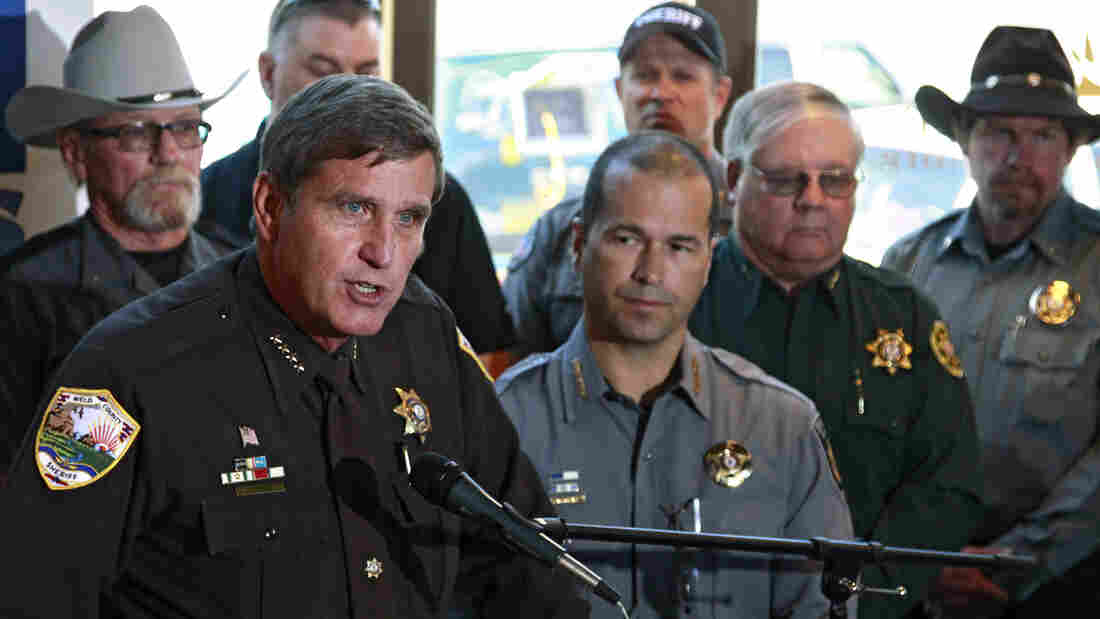 It's a legal battle that is far from over. In 2013, Sheriff John Cooke (left) and other sheriffs in Colorado filed a federal civil lawsuit objecting to two gun control bills, saying they violate the Second Amendment. This week a crucial gun control measure goes to trial. Brennan Linsley/AP hide caption 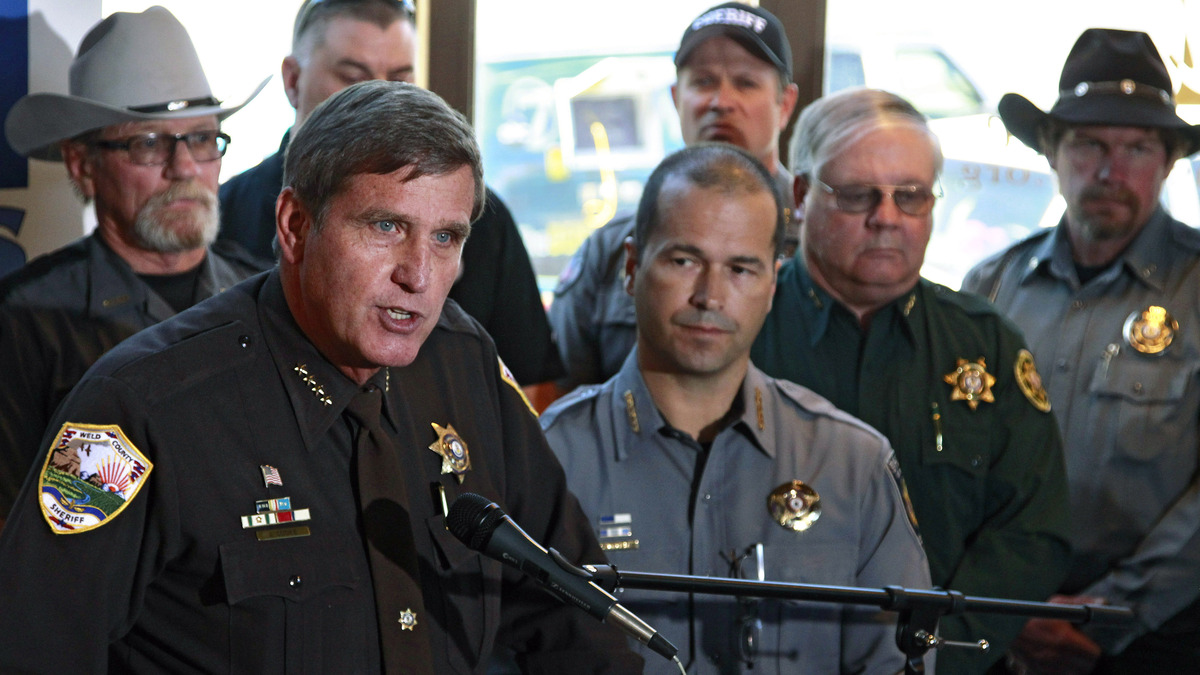 It's a legal battle that is far from over. In 2013, Sheriff John Cooke (left) and other sheriffs in Colorado filed a federal civil lawsuit objecting to two gun control bills, saying they violate the Second Amendment. This week a crucial gun control measure goes to trial.

Tom Sullivan never thought much about guns or gun control — until his son was killed in the Aurora, Colo., movie theater shooting. The gunman wielded a rifle with a 100-round magazine.

Sullivan is convinced that if Colorado's ban on high-capacity magazines had been in effect, his son Alex may have had a chance.

"It was one second, and the next second he was dead," Sullivan says. "That was because of the high-capacity magazines."

After the Aurora shooting, Sullivan turned to activism. He successfully lobbied for stricter background checks for all private gun sales and for a ban on magazines holding more than 15 rounds. The measures were instantly controversial.

After Fight Over Colo. Gun Laws, Two Sides As Dug In As Ever

"The problem is, who is the government to tell a citizen how many rounds they need to defend themselves?" says Sheriff John Cooke of Weld County, Colo.

Cooke, along with a group of rural sheriffs, is suing the state to overturn the laws that Sullivan worked so hard on. The sheriffs argue that, among other things, the laws violate the Second Amendment.

Cooke isn't alone in questioning whether a ban on high-capacity magazines would even stop a rampaging shooter.

"OK, so ready? Stop me," says Wyatt as his clip drops to the floor and he loads another.

In the blink of an eye, he dropped out a clip from his gun and seamlessly pulled another from his belt and loaded it. It's clear he's practiced this.

"I did it in slow motion so you could see it," Wyatt says. "If I did it at full speed, you'd have to have X-ray vision eyes to be able to tell."

Perhaps the only thing you won't find in Wyatt's gun store are high-capacity magazines. Step into any gun owner's home, though, and he says you'll surely find one.

"They're completely common. They're everywhere. Everybody has them," Wyatt says. "It's not something that can ever be controlled, even if you ban them."

Wyatt says universal background checks will never stop someone who is determined to get a gun. To him, these laws violate the rights of the majority of law-abiding citizens for the crimes of a few.

"It's not American," Wyatt says. "It's not right for this country or for this state."

Still, gun control proponents such as former state Sen. John Morse say the laws are reasonable — and will save lives. Morse lost his job in a recall election because of his role in passing gun control.

"Colorado is safer from gun violence for what we did," Morse says. "It was absolutely the right thing to do."

If he sounds confident, it's because several courts outside of Colorado have upheld magazine restrictions and background checks. Seven other states limit magazines, and five others have universal background checks.

But no matter the outcome in court, voters may get their say. Several groups are pushing for a statewide ballot measure that would overturn the laws.

Tom Sullivan says that if the laws are overturned, he has no problem pressuring lawmakers in Denver to do something — again.

The trial is expected to last two weeks. Whatever the outcome, both sides will likely appeal.