Accessibility links
We Read The Year's Best New Sci-Fi — So You Don't Have To The Campbell Award honors new writers in sci-fi and fantasy; this year's Campbellian Anthology features 111 authors and more than 860,000 words — and blogger K. Tempest Bradford has read all of them. 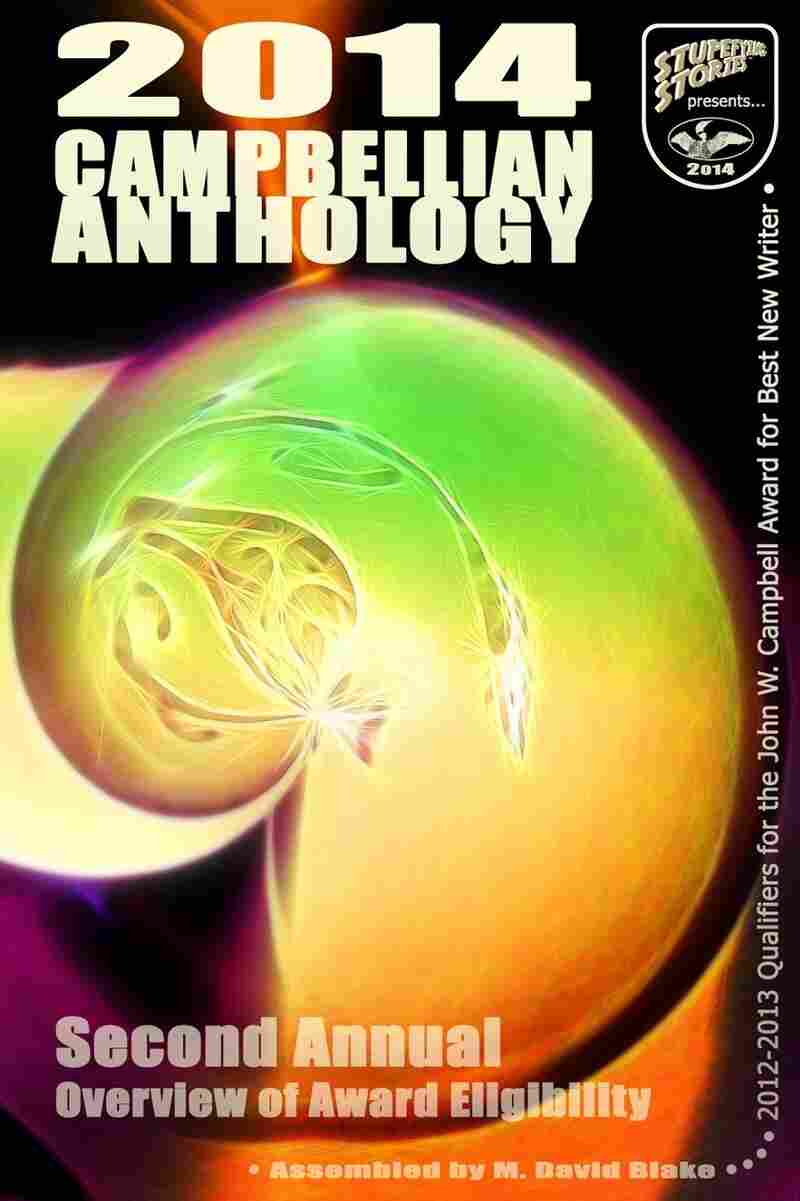 The 2014 Campbellian Anthology is a free download. hide caption 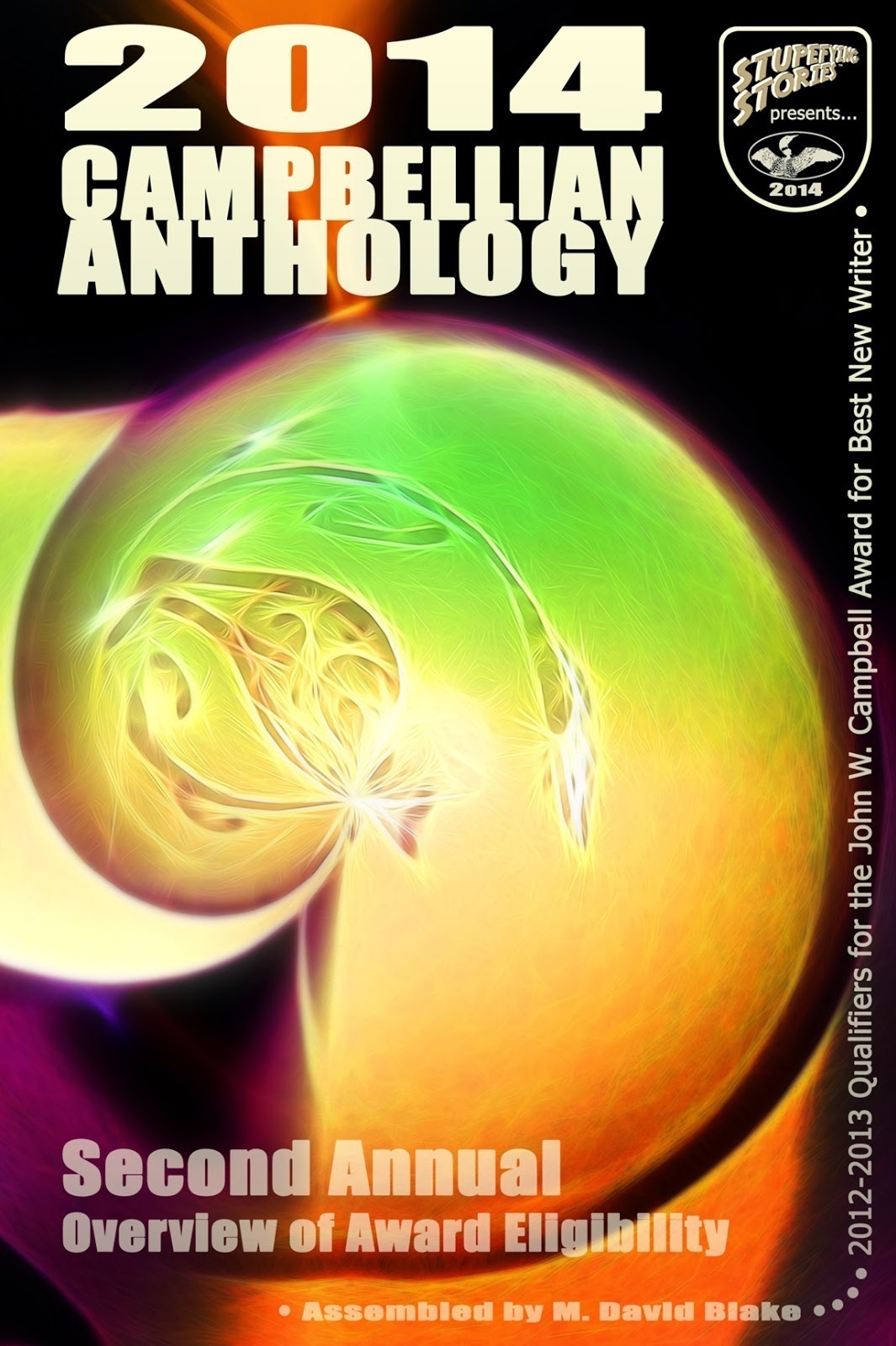 The World Science Fiction Convention is a gathering of fans ranging from sci-fi movie buffs to gamers to comics aficionados — but at its heart, WorldCon is for lovers of literature, and it hosts the Hugo Awards, the Oscars of sci-fi and fantasy.

During the ceremony, one award is given that's not a Hugo: the John W Campbell Award for Best New Writer. The Campbell celebrates potential: Nominees are often young, just starting out in the field (though not always), and it serves as a kind of signpost for fans, pointing the way to the next great read.

It used to be difficult to find all of the fiction by eligible writers; now it's (almost) all in one place. Author M. David Blake took on the arduous task of compiling the 2014 Campbellian Anthology, a free collection of short stories and novel excerpts by 111 authors eligible for the Campbell Award. The e-book is over 860,000 words long — longer than George R.R. Martin's A Storm of Swords and A Dance With Dragons put together, according to the introduction. That's a ton of fiction to read.

The Campbellian Anthology offers a glimpse into the collective id of speculative fiction. It shows us what editors are buying when they're not responding to a name, a reputation or prior feelings about an author's work. It also reveals what new writers are bringing to the genre, whether they're just reflecting current trends or offering something genuinely new.

So, what did I learn from reading ALL those stories?

Authors are still writing — and editors are still buying — stories that have been done a thousand times before. They'll be done thousands of times again, since there will always be young writers. The stories that stand out are the ones that bring new perspectives — and I saw a good number of those, as well as a ton of boring, predictable clunkers.

Themes that dominate the science fiction, fantasy and horror store shelves are evident here as well: The current taste for apocalyptic and post-apocalyptic settings (with and without zombies) has infiltrated every market and psyche and won't likely go away soon, even though there are few new ideas (though I'm glad that the rage for cheap twist endings seems to be fading).

Another disturbing trend was the number of good stories I read that were utterly ruined when harmful stereotypes and casual bigotry reared their ugly heads. I didn't see malicious intent, just cluelessness and lazy writing.

None of this is surprising, given that these are writers at the beginning of a career. Even so, there are a couple of dozen who really stand out, with stories built from the elements of great SF: Prose that isn't just competent, but engaging, surprising and alive. Ideas that delve deep into the themes the authors are exploring. Characters that crawl right up off the page and yank you into their worlds.

Nominations for the Campbell Award are due today, so based on the anthology, here's my ballot:

Carmen Maria Machado's stories build and build until they surround and ensnare, and at the end you're always glad to be all tangled up. My favorite, "Especially Heinous: 272 Views of Law & Order SVU," defies explanation. Call it postmodern, or fan fiction, or Lovecraft meets Dick Wolf — all labels fall short of capturing the essence of this story.

The excerpt from Sofia Samatar's compelling novel A Stranger in Olondria should be enough to make you run out and buy the book. Just don't overlook her short "Selkie Stories Are for Losers," the best story about loss and love and selkies I've read in years.

I'm as weary of zombies as I am of apocalypses, so Stant Litore's No Lasting Burial (#4 in the Zombie Bible series) should not have engaged me as deeply as it did. The atmospheric setting is what did it — and I'm intrigued by the idea of reinterpreting the Gospel of Luke as a zombie tale.

I adored Brooke Bolander's "Her Words Like Hunting Vixens Spring," a revenge story that's both visceral and tender. The image of a pack of vixens crawling their way up out of the protagonist's throat won't soon leave you. Bolander's other stories are similarly striking, but I'll never forget that first one.

My favorite John Chu story isn't in this anthology (you can find it here) though I like the one that is included — called "Incomplete Proofs" — almost as much. Chu is a master at painting deep and complex relationships with very few strokes. He applies that same talent to spooling out his elaborate science fictional ideas, condensing them into stories that never feel too long.

Any of these authors are worth downloading the 2014 Campbellian Anthology to read. In fact, the whole thing is worth reading, even with the ups and downs and general unevenness. You don't have to read it all or even read it straight through. Skip around, make random choices. You're guaranteed to find more new authors you'll love and want to follow.