Accessibility links
Greyhound Racing May Be Headed For The Finish Line Today, only seven states still have the sport, and most of the dog tracks are in Florida. A bill in the Florida Legislature could kill greyhound racing there — and possibly nationwide. 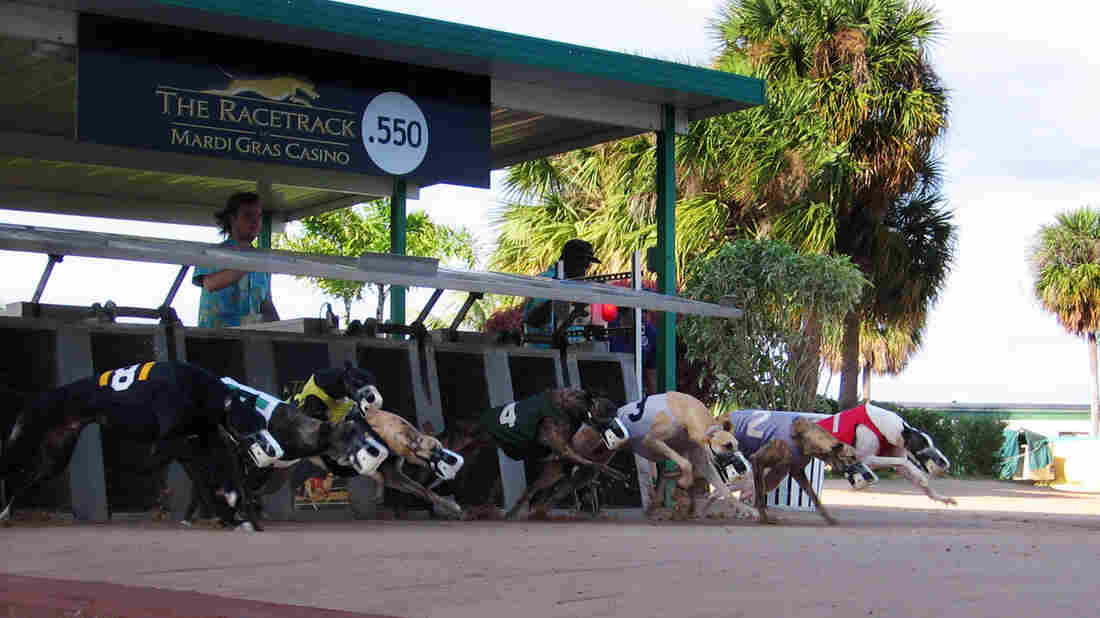 Greyhound racing has been on a downward trend for decades. Greg Allen/NPR hide caption 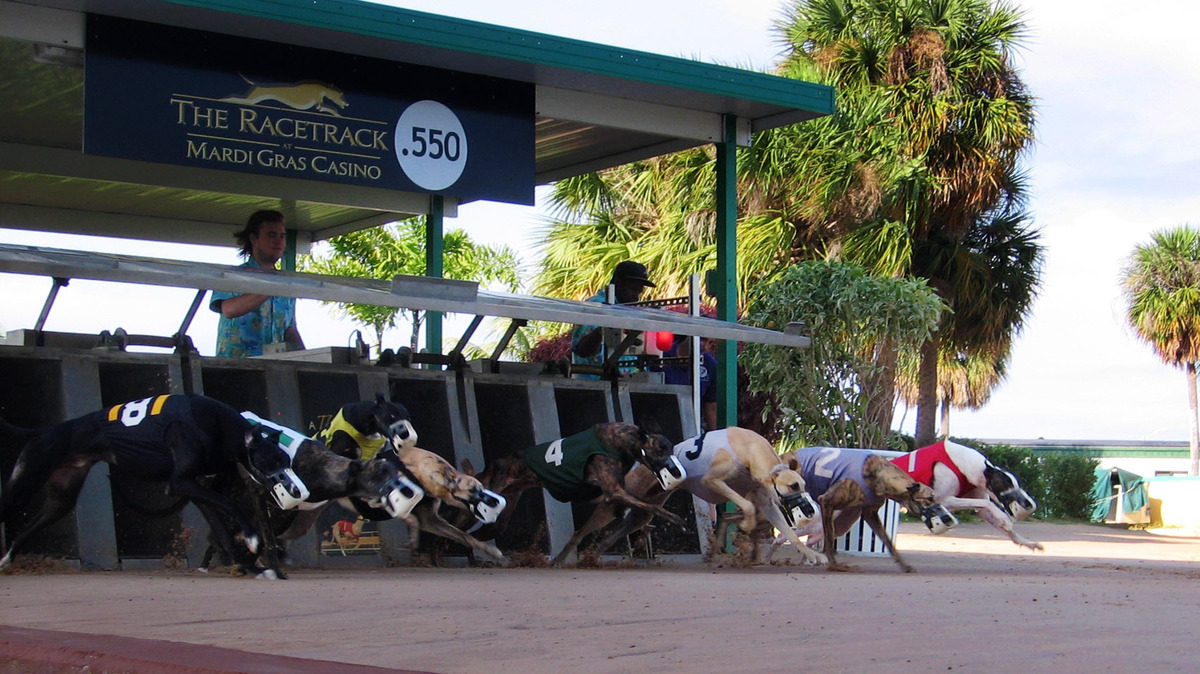 Greyhound racing has been on a downward trend for decades.

On a weekday afternoon at the Mardi Gras Casino near Fort Lauderdale, Fla., most guests are inside at the relatively new card tables and slot machines. Outside, at the 5 p.m. post time, only about a dozen people are in the grandstand.

This is what they're waiting for: The handlers lead out the greyhounds. The dogs are loaded into their starting boxes. Then eight greyhounds run in the first of 18 races. 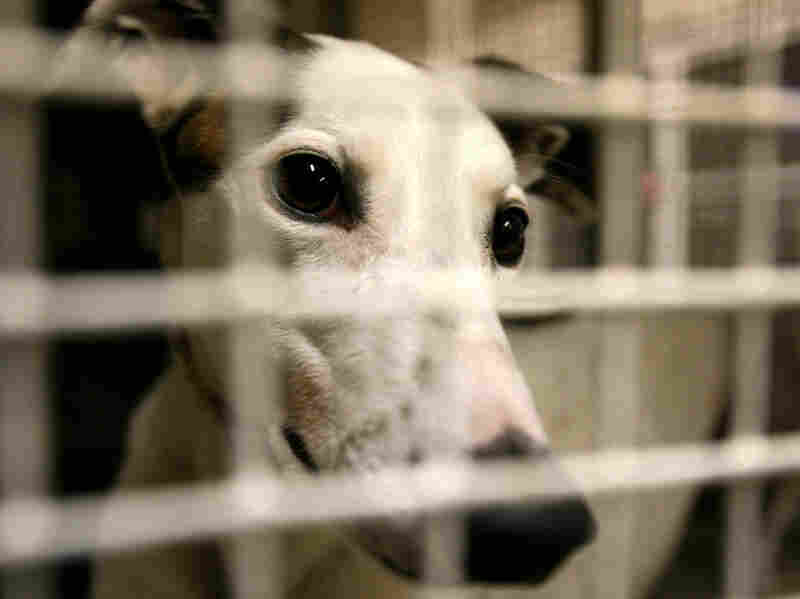 Concerned over animal treatment, the Humane Society of the United States and others support a Florida bill that would reduce the number of tracks racing greyhounds. Others say abuse is rare, and even hurts the owners' chances of winning a race. Julie Fletcher/MCT/Landov hide caption 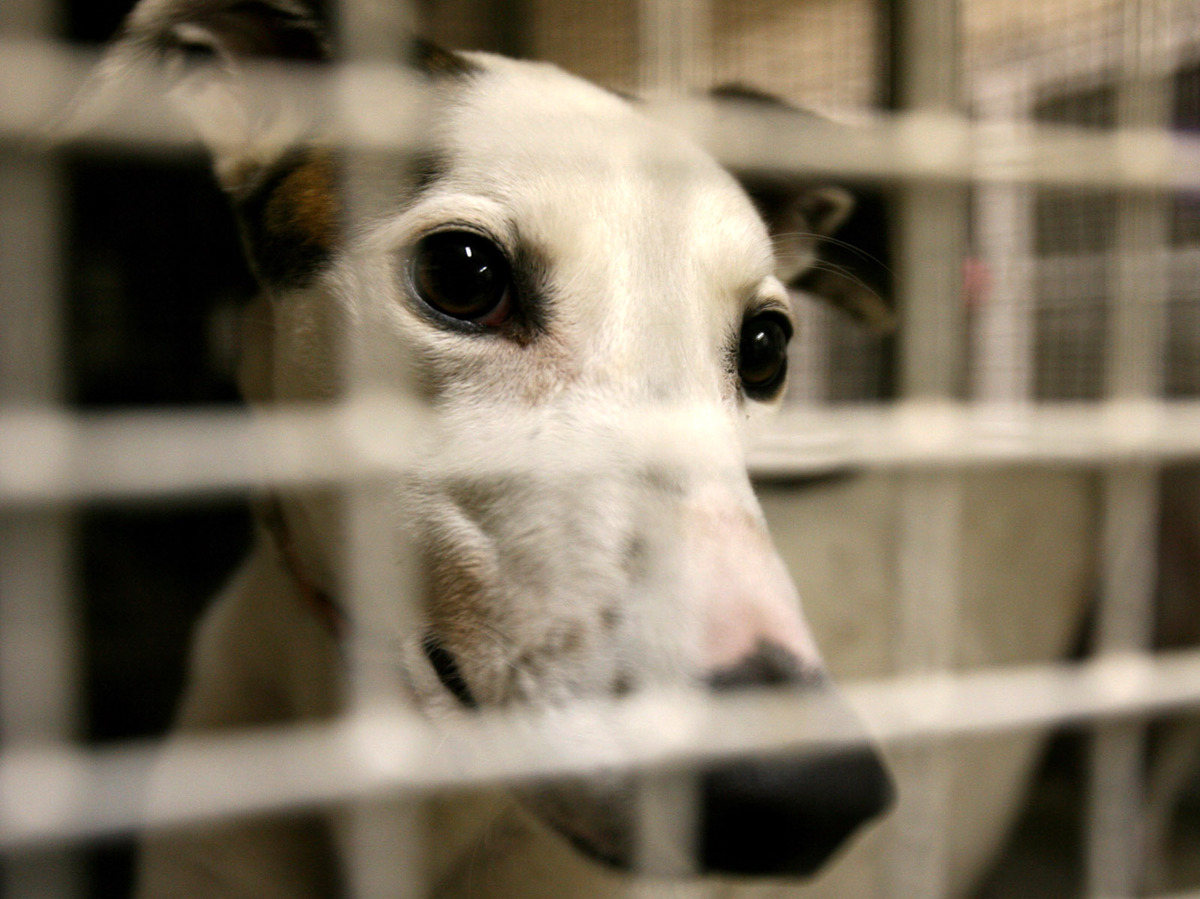 Concerned over animal treatment, the Humane Society of the United States and others support a Florida bill that would reduce the number of tracks racing greyhounds. Others say abuse is rare, and even hurts the owners' chances of winning a race.

Greyhound racing, a sport in decline, is still hanging on, mostly in Florida. But a bill gathering steam in the Legislature may hasten its demise.

Sponsored by Democratic state Sen. Maria Sachs, the bill has been gaining momentum, in part, because of support by groups such as the Humane Society of the United States, who are concerned about how greyhounds are treated. Between last May and February, 95 greyhounds died at tracks in Florida as a result of illness or injuries.

"The attendance has gone down," Sachs says of the sport. "The treatment of the dogs, of course, has gone down as well because they're not making any money anymore."

For most of the 80 years it's been in existence, the Mardi Gras Casino was known as the Hollywood Kennel Club, later as the Hollywood Greyhound Track. As a sport, greyhound racing's best days were probably 50 years ago, when, in most areas, horse and dog tracks were the only legal gambling outside of Las Vegas.

In recent decades, many tracks have closed as states have banned greyhound racing over concerns about treatment of the dogs. Today, 13 of the remaining 24 tracks are located in Florida. Sachs' bill may soon reduce that number.

For several years now, Florida has allowed most of the dog tracks to also run poker rooms. A few, like the Mardi Gras Casino and other tracks near Miami, also have slot machines. Sachs' bill would allow them to keep the slots and the card games even if they eliminate greyhounds. She says it just recognizes a fact that greyhound racing is a dying industry.

"I'd like to see the state of Florida come into the 21st century," Sachs says.

There's not much dispute about the economic facts.

In Florida, the amount bet on dog races is a third of what it was just a decade ago. Only a few tracks still make money on greyhounds, according to a consultant's report to the Legislature. For the rest, the dogs are a loss leader that allows them to continue operating their profitable card rooms and slot machines.

At the Mardi Gras track, the first race has just run. Trainer Alan Murray is walking one of the racers. He's a brindled black and tan greyhound named Musical Chairs who is still panting from the race.

"He did well," Murray says. "He ran third." That means he made money for his owners.

Murray has a law license and an economics degree. He and his wife, a veterinary assistant, raise greyhounds. Like most in the industry, he angrily rejects charges that his dogs aren't treated well. Yes, as in any industry, there are bad apples, he says. But even with declining purses, Murray says there's no incentive for owners and trainers to cut corners when it comes to taking care of their greyhounds.

"If you're cutting corners, you're not making money," Murray says. "You don't get paid unless your dog runs fourth or better. If you cut corners, then that guy next to you is going to whip your butt."

Jack Cory, a lobbyist for the Florida Greyhound Association, believes the real issue is that some greyhound tracks want to become casinos.

"They think if they do away with live racing, then the Legislature will chip away and give them slot machines this year, table games next year," Cory says. "And you will have 13 casinos operating in the state of Florida."

At the Palm Beach Kennel Club, Vice President Joe Rooney says concerns that the bill may kill dog racing aren't warranted. Some tracks will close, he says, but his is one of three or four that will keep racing.

"I think actually you would just end up with better dogs, better kennels, better operators," Rooney says. "We would still have plenty of dogs to meet our requirements."

However, Rooney concedes that the days of greyhound racing appear to be numbered. In Florida, the Legislature is considering an overhaul of the state's gaming code, one that may open the way for big resort casinos in South Florida.

That's competition that even the fastest greyhounds are going to find hard to beat.