Accessibility links
Changing The Face Of Astronomy Research An apprenticeship program in New York City helps lower-income and minority students break into advanced sciences. For one, the love of the stars was motivation to tackle the tough field of astronomy. 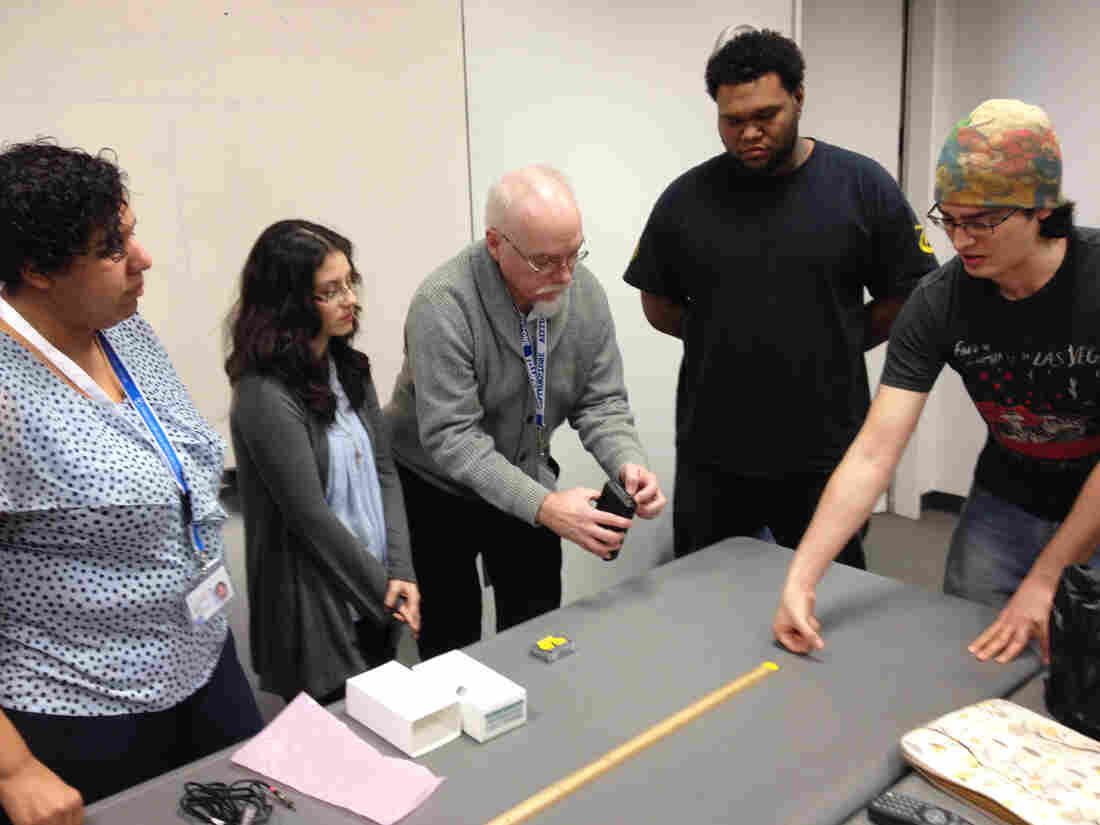 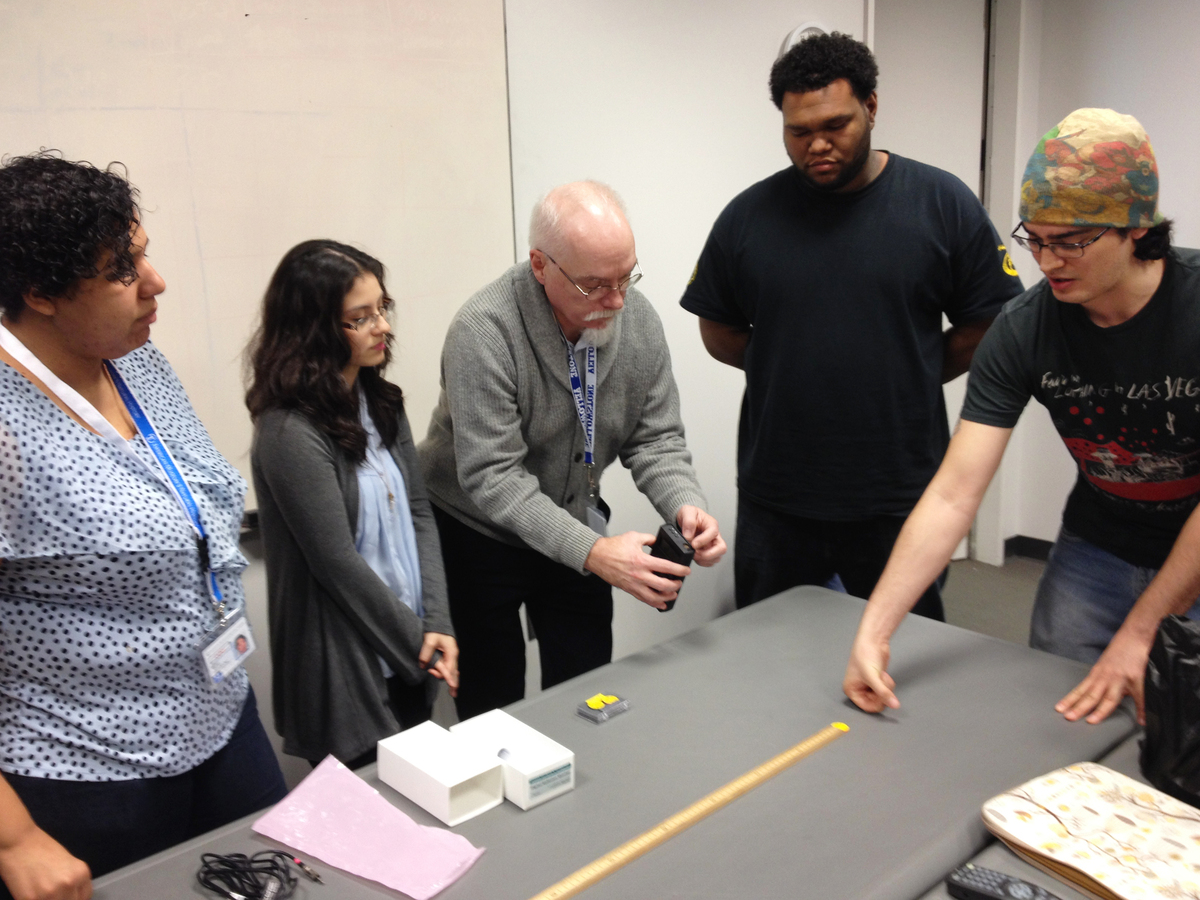 Shooting for the stars is expensive.

Advanced sciences like astronomy require years of study and graduate degrees. And the soaring cost of college can be a heavy obstacle for low-income and minority students hoping to break into those fields.

A program at the City University of New York hopes to lift that burden by providing scholarships and one-on-one mentoring to underrepresented students.

AstroCom NYC is designed for CUNY scholars like Ariel Diaz, who first felt the pull of astronomy when he was a Marine stationed in North Carolina. Diaz was miserable at the time; he missed his friends and family back in New York City.

Diaz finished his service three years ago and came home, enrolling in a CUNY community college. When it was time to take a science class, he thought about that time on the beach.

Diaz laughs now, because it wasn't easy. As any Astronomy 101 student can tell you, it's far more physics and math than stargazing. Diaz needed help passing calculus. But he says it was worth it to learn about stars and galaxies.

"Never in my life have I been motivated to do something," Diaz says. "And this is the first thing that touched me. It was like, I really like it and I want to do it."

One of Diaz' professors was so impressed, she encouraged him to apply to AstroCom NYC. Now he's one of eight students in the program, and has an astronomy research job lined up for the summer.

"And they're paying us. That's unheard of to me where I'm coming from," says Diaz, who hopes to become an astronomy professor.

AstroCom NYC is among many programs funded by the National Science Foundation to bring more underrepresented minorities into the sciences. Even though the country's most famous astronomer, Neil deGrasse Tyson, is African-American, only 2 percent of all U.S. students earning doctoral degrees in astronomy and physics over an entire decade were either black or Hispanic.

"If we just throw a couple more students into grad school, we make a huge impact," says Tim Paglione, who leads AstroCom NYC.

Paglione says CUNY's low-income, mostly minority students often aren't prepared well in high school for all that math and physics. And many of them have to work to pay for college.

"We don't want them to be working," says Paglione, who teaches astronomy at CUNY's York College at Queens. "We want them to be concentrating on their academics. So we removed that tuition problem."

AstroCom NYC pairs students with mentors and provides laptop computers and free transportation on city subways and buses. Students meet every Friday at the American Museum of Natural History, where Paglione works as a researcher. At a recent session, an instructor explained different types of radiation.

But one-on-one mentoring is expensive, which helps explain why the program has only accepted eight students since it was founded two years ago. AstroCom NYC expects to include about 25 students by the end of its five-year grant. Diaz's astronomy professor, Saavik Ford of the Borough of Manhattan Community College, says there's a reason it's so small.

"It's an apprenticeship program," she says. "Because that's what we know works. We can't have one faculty member to 50 students. It's not effective."

Ford says that's been proven by decades of research. "We have this huge dropout rate and it's much worse for underrepresented minorities and women," she says.

Researchers say these groups often need extra financial and academic support. They point to a similar program in Tennessee that boosted the number of blacks and Latinos earning Ph.D.s. But AstroCom NYC starts earlier, beginning with freshman, to keep them on track. So far, all eight of the program's students are still in school, although two left astronomy for other majors.

Betsy Hernandez joined the program this year and her goal is a Ph.D. in physics. Hernandez, who's 35 and works part-time, says the free tuition has lightened her load.

"[Without a scholarship] I would have continued with my student loans which I didn't want," she says. "That's one of the reasons why I stopped [attending school] at one point — because I wanted to get rid of the debt."

For Ariel Diaz, it's all the other support that's really making a difference. He lives with his father on the Lower East Side, in public housing where it's hard to find a quiet place to study.

"I just don't have the space," he says. "My door doesn't close and I receive knocks all the time."

Diaz is grateful for the free laptop computer and the monthly transit card. They enable him to study at the museum when he isn't caring for his father, who is blind and has diabetes.

Jovino Diaz, 68, says he's proud of his son, even if he doesn't fully understand what Ariel is studying. Jovino Diaz had very little education in his native Dominican Republic.

"As long as I'm studying, that's all he really cares about," Ariel Diaz says, translating his father's Spanish. "Because as long as you're studying to go forward, you're not going to go backwards."