Accessibility links
In The 1870s And '80s, Being A Pedestrian Was Anything But Huge crowds packed arenas to watch the world's best pedestrians walk in circles for six days at a time. And trainers encouraged the athletes to drink champagne — at the time considered a stimulant. 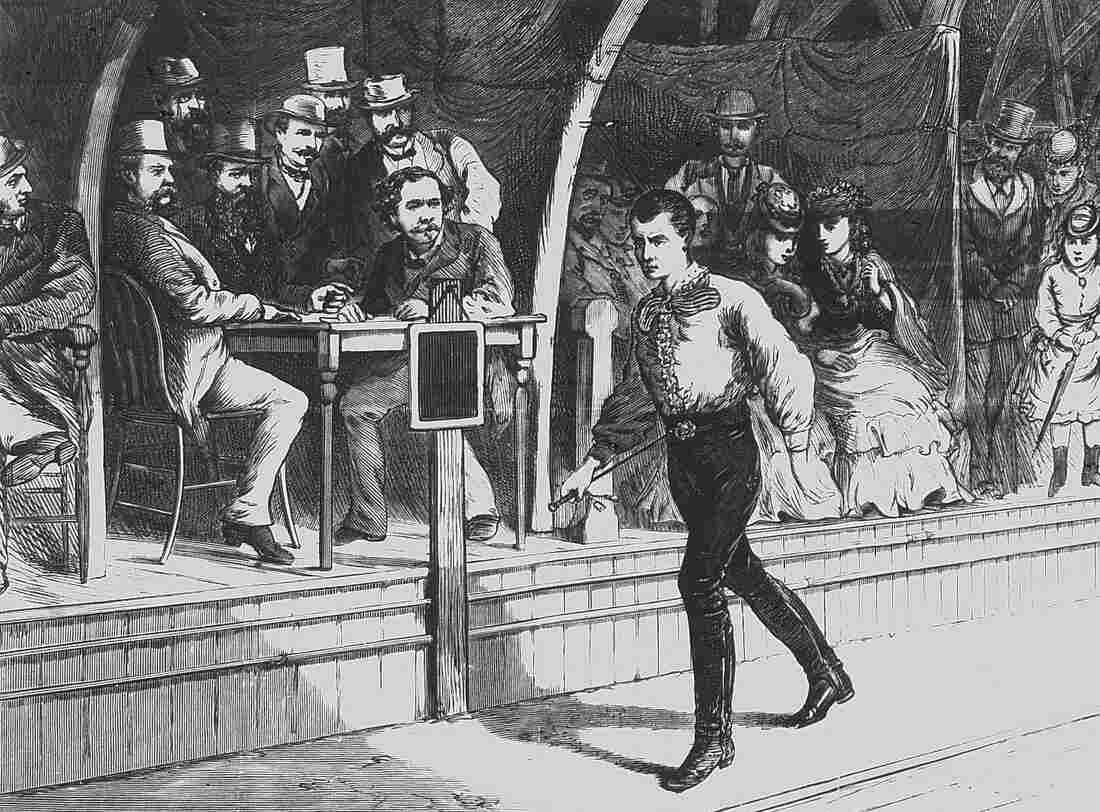 Walking The Walk: Fans look on as pedestrian Edward Payson Weston walks at a New York City roller rink in 1874. His unique stride was described as "wobbly." Library of Congress hide caption 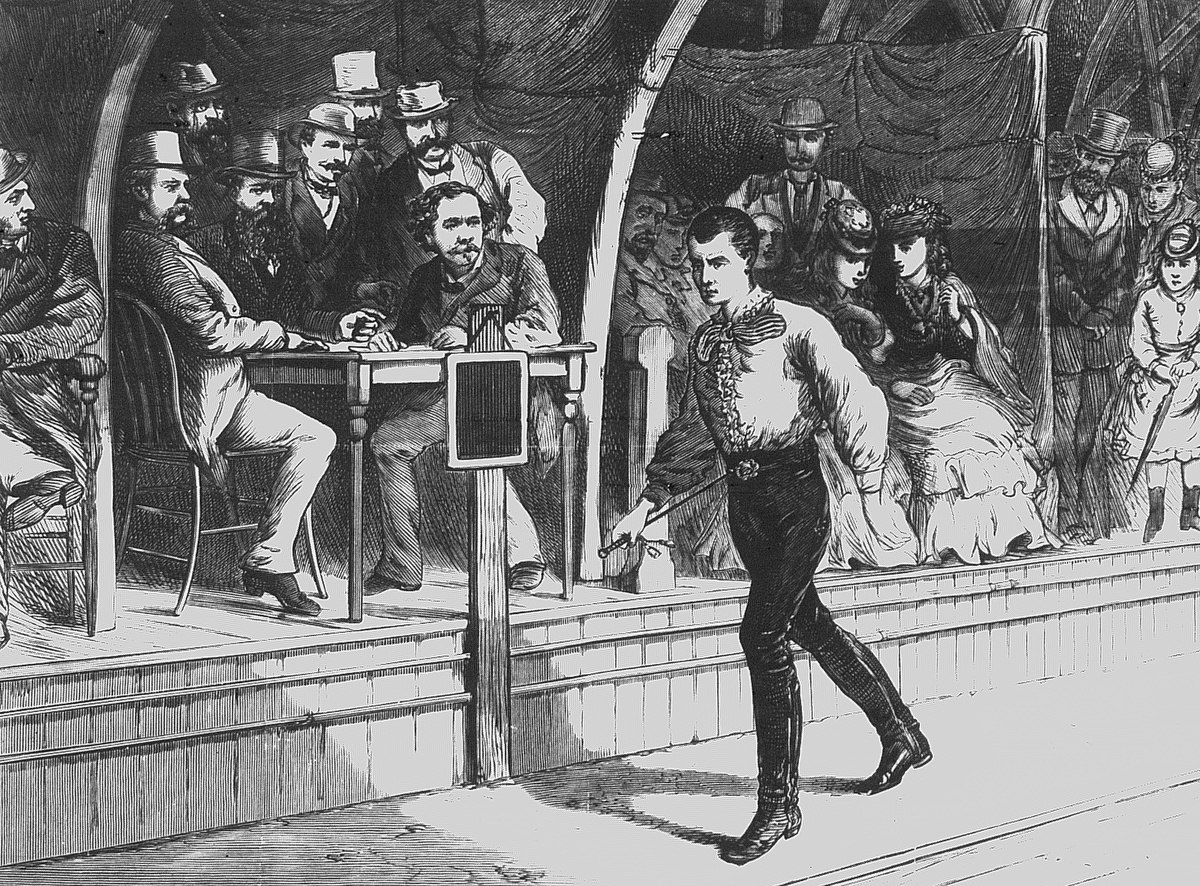 Walking The Walk: Fans look on as pedestrian Edward Payson Weston walks at a New York City roller rink in 1874. His unique stride was described as "wobbly."

We may think of baseball as America's national pastime, but in the 1870s and 1880s there was another sports craze sweeping the nation: competitive walking. "Watching people walk was America's favorite spectator sport," Matthew Algeo says in his new book, Pedestrianism.

"In the decades after the Civil War there was mass urbanization in the United States [with] millions of people moving into the cities," Algeo tells NPR's Robert Siegel. "And there wasn't much for them to do in their free time, so pedestrianism — competitive walking matches — filled a void for people. It became quite popular quite quickly."

Huge crowds packed indoor arenas to watch the best walkers walk. Think of it as a six-day NASCAR race ... on feet.

"These guys were walking 600 miles in six days," Alego says. "They were on the track almost continuously. They'd have little cots set up inside the track where they would nap a total of maybe three hours a day. But generally, for 21 hours a day, they were in motion walking around the track." 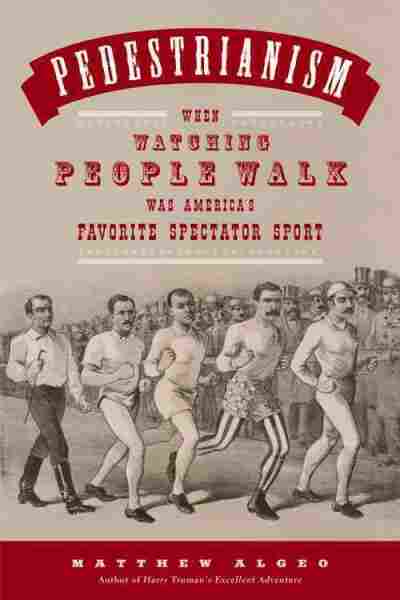 On what you saw at a pedestrian match

[For] six-day walking matches, the rules were pretty simple. They would just map out a dirt track on the floor of an arena — many of the matches took place at the first Madison Square Garden in New York — and the lap was about 1/7th or 1/8th of a mile. And you could only walk six days because public amusements were prohibited on Sundays. So beginning right after midnight on Sunday night/Monday morning, the walkers would set off and they would just keep walking until right up until midnight the following Saturday.

But people didn't go just to watch the people walk. It was a real spectacle. There were brass bands playing songs; there were vendors selling pickled eggs and roasted chestnuts. It was a place to be seen. There were a lot of celebrities who attended the matches: James Blaine, the senator from Maine, was a fan. So was future president Chester Arthur. Tom Thumb attended many matches. And so people went to see celebrities and see the spectacle, not just to watch the people walk.

[Edward Payson Weston] was one of the most famous pedestrians of the 19th century. He was ... a door-to-door bookseller from Providence, R.I. And ... in 1860, he made a bet with a friend on the presidential election. [He] bet that Lincoln would lose, and of course he lost the bet. The terms of the bet were that the loser had to walk from Boston to Washington in 10 days to see the inauguration. And Weston did this. It generated much publicity. 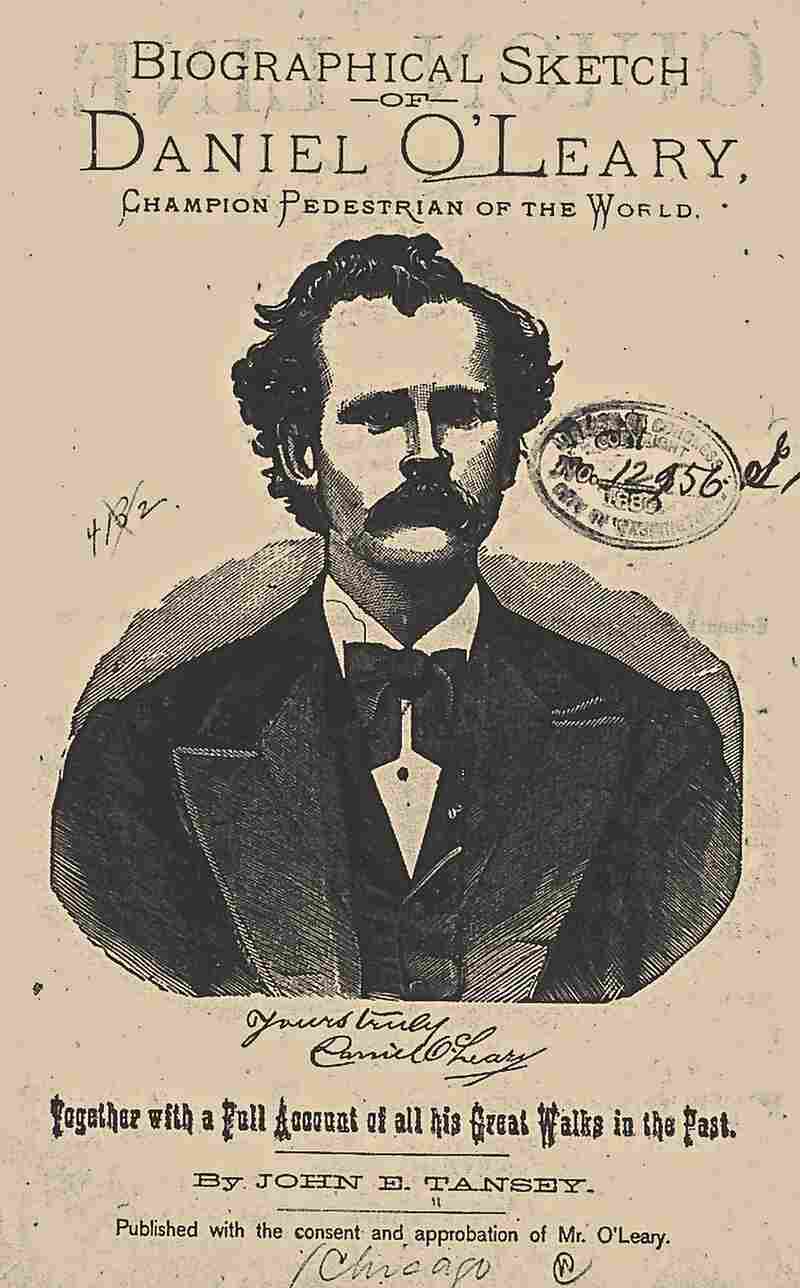 People were fascinated by the idea that somebody would walk from Boston to Washington in 10 days in the dead of winter on these horrible roads. And all along the way, large crowds came out to see him. And after the war, Weston, still famous, decided to capitalize on his fame by taking the act indoors. He would go to a roller rink, say, and attempt to walk 100 miles in 24 hours. And people would pay 10 cents just to come and watch him walk in circles for a day.

Dan O'Leary ... was the first great rival to Edward Payson Weston. I call them the Muhammad Ali/Joe Frazier of their generation. Weston was a flashy guy. He wore ruffled shirts and sashes and capes and carried a cane ... he really understood that it was about entertainment as much as it was an athletic event.

Dan O'Leary, on the other hand, was kind of a taciturn guy. He was an Irish immigrant from Chicago and he would walk ramrod straight, upright with his arms moving like pistons. He was sort of the Joe Frazier character in this. He was all about the competition. ...

He was really one of the first famous Irish-American athletes. He was from Chicago, which, of course, had a large Irish population. There was almost kind of an internationalist rivalry between the two of them, Weston representing old England and O'Leary representing new America — kind of pull yourself up by your bootstraps America. A guy that was self-made, came to the States with nothing and made the equivalent of a million dollars today engaging in these walking matches.

He was actually an immigrant from Haiti who was a grocery store clerk in Boston and, on a whim, entered a six-day race in Boston and performed so well that he immediately moved up to the major leagues so to speak. ... "The Negro Wonder" is what many of the papers called him; it was always mentioned that he was black. But it was an opportunity for him and for other African-Americans at the time to take part in what was largely a white sport.

On the gambling and fixing scandals

Champagne was considered a stimulant. And a lot of trainers — these guys had trainers — advised their pedestrians to drink a lot of champagne during the race. ... The problem was a lot of these guys would drink it by the bottle. That definitely was not a stimulant to say the least.

[Weston] was found to be chewing coca leaves while he walked in a race in 1876. This wasn't strictly illegal but it was considered unsportsmanlike and outright cheating at the worst. He admitted that he used coca leaves in a race, but he said it was under the advice of his doctor.

On how pedestrians drank champagne throughout the race

Champagne was considered a stimulant. And a lot of trainers — these guys had trainers — advised their pedestrians to drink a lot of champagne during the race. They thought that this would give them some kind of advantage. The problem was a lot of these guys would drink it by the bottle. That definitely was not a stimulant to say the least.

On how bicycles took over pedestrianism as the popular spectator sport

It sort of went from a NASCAR at superslow motion to a NASCAR at slow motion. And the other advantage of the bicycle races is that especially at the end, when the competitors were completely sleep deprived, there would be spectacular crashes, and of course the crowd enjoyed that a lot.

On the lasting legacies of pedestrianism

For one, the whole idea of corporate sponsorship ... so prevalent in modern sports really began with pedestrianism. Pedestrians had lucrative sponsorship deals. Dan O'Leary was the spokesman for a brand of salt. John Hughes, another pedestrian, was sponsored by the National Police Gazette, a popular newspaper, and he actually raced with a shirt that had the paper's logo on it. But for a more concrete example, you can go to London. The Royal Agricultural Hall was the site of many great six-day races involving Americans and Brits, but it is one of the few tangible, physical remnants of the great walking matches of the 1870s and 1880s.

Read an excerpt of Pedestrianism