Accessibility links
A New Era? Afghan Presidential Hopefuls Court Women's Vote But they're discovering there's no single "women's bloc." Afghan women are focused on a host of issues, ranging from security to the economy. And some will still vote for whom they're told to vote. 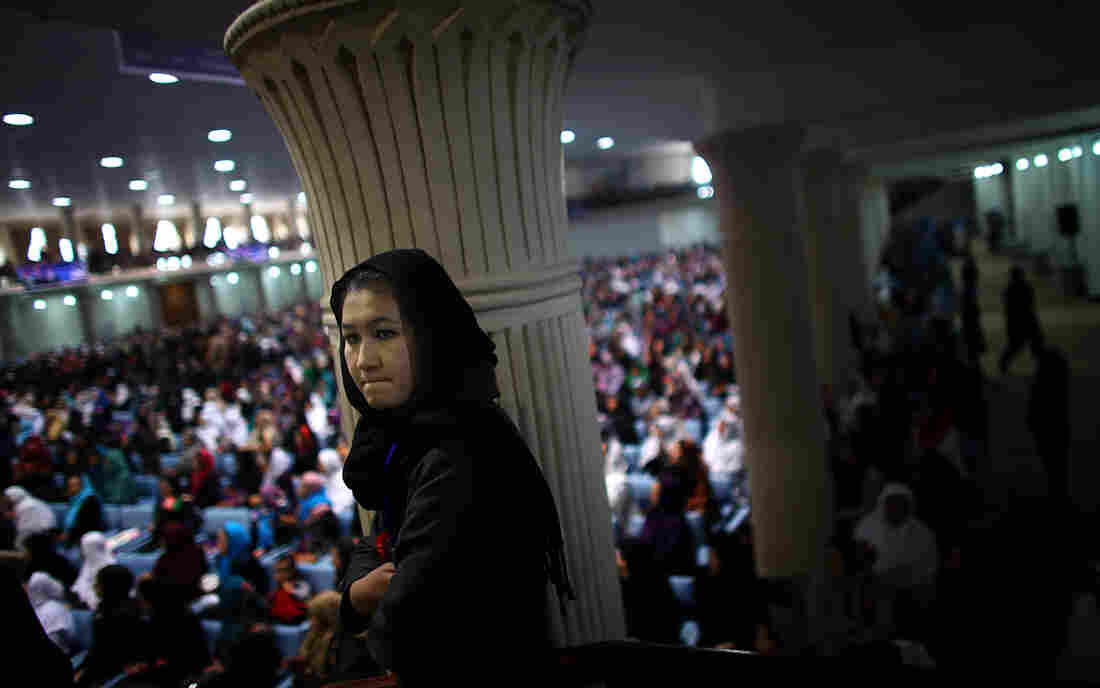 An Afghan woman listens to presidential candidate Ashraf Ghani during a campaign rally in Kabul on March 9, International Women's Day. Women will play a greater role in choosing Afghanistan's next president than ever before. David Gilkey/NPR hide caption 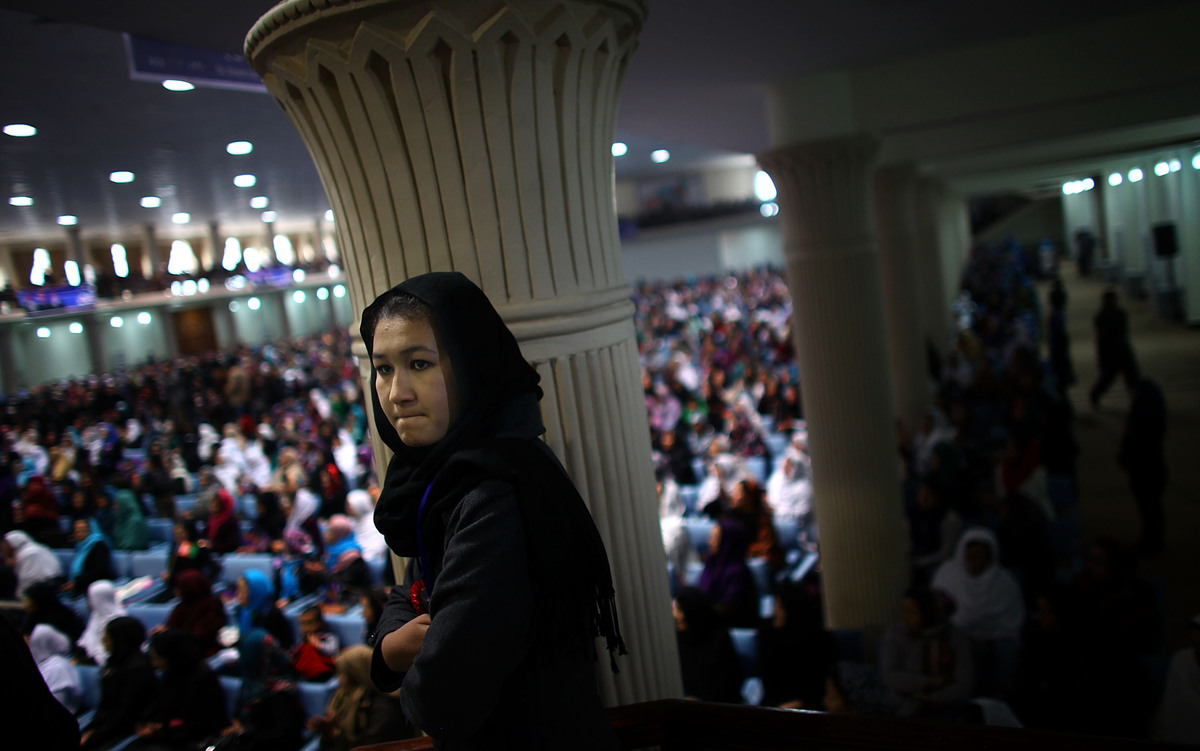 An Afghan woman listens to presidential candidate Ashraf Ghani during a campaign rally in Kabul on March 9, International Women's Day. Women will play a greater role in choosing Afghanistan's next president than ever before.

On International Women's Day last month, Afghan presidential candidate Ashraf Ghani held a rally in Kabul attended by several thousand women. While they were all wearing headscarves, there was not a full-length burqa to be seen in the crowd. And the Western-educated Ghani did something highly unusual in Afghanistan: He let his wife, Rula, a Lebanese-American Christian, address the crowd.

Afghans head to the polls on Saturday to elect a successor to President Hamid Karzai in what will be the first democratic transfer of power in the country's history.

And women have been far more visible and vocal during this campaign than in previous elections — at least in urban areas. The candidates have made much more of an effort to address women's rights in their speeches and debates. 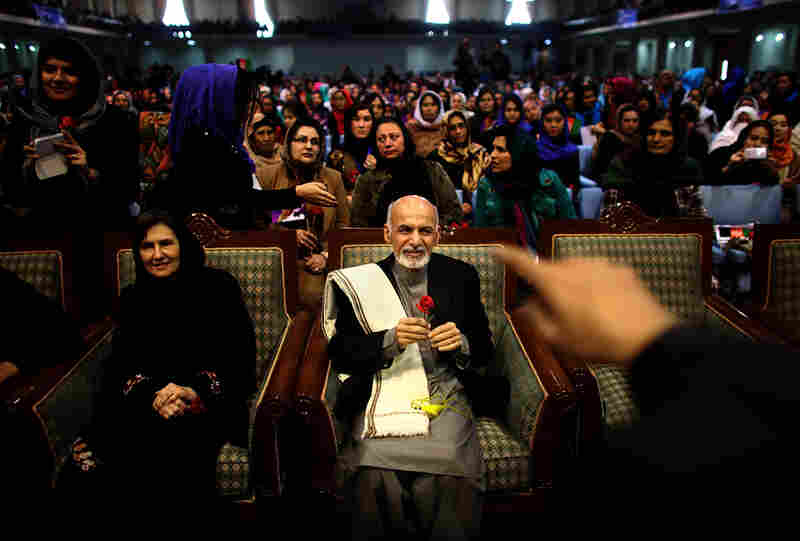 Ghani sits next to his wife, Rula, during a campaign rally in Kabul on March 9. In an unusual move for Afghan politics, Ghani's wife spoke during the rally. David Gilkey/NPR hide caption

Take Khatera Tajamyar, for instance. What matters to her, the 24-year-old says, is that Ghani is a Western-educated, former World Bank official.

"Four years ago, I studied a couple of his books, and I prefer him as a candidate because of his knowledge," she says.

Parliamentarian Elay Ershad explains her support for Ghani this way: "We need someone who can build this country."

Ershad and other Afghan women say they fully back Ghani, even though one of the other leading candidates, Zalmay Rassoul, has a female vice presidential running mate.

"I would have not vote for someone because she is a woman or that person is a woman," Ershad says, adding that policies, not gender, are important to her.

The third front-runner, Abdullah Abdullah, has female supporters for a mix of reasons as well.

Hafezo Mir, 55, says she supports Abdullah because he's mujahid, referring to the anti-Taliban mujahedeen, Arabic for "holy warriors." Abdullah was one of the top political officials of the mujahedeen.

"Women, like men, they are not one bloc," she says. 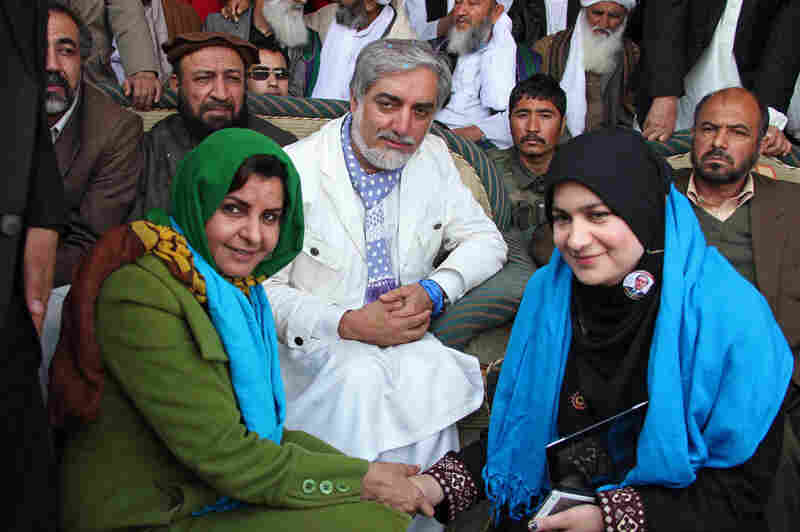 Supporters pose for a photo with Afghan presidential candidate Abdullah Abdullah — one of three front-runners — during a campaign rally in Herat, Afghanistan, on April 1. Hoshang Hashimi/AP hide caption

Some are concerned about security and the economy, while others are focused on preserving the gains in women's rights since the fall of the Taliban.

But Moradi argues the presidential candidates have failed to motivate many women to vote in this election.

"They were not specific, they were sort of conservative in their speeches about women," she says.

And as Moradi and Afghanistan expert Martine Van Bijlert both argue, many female voters who do vote don't end up voting for the candidate they personally prefer.

"It's not a given actually that women will necessarily vote differently from their men," Van Bijlert says — especially rural women who are still largely illiterate and subject to tribal or family pressure.

Van Bijlert also says that even if female turnout is high on paper, it doesn't mean all of them came out to vote. There is an illegal practice, especially in the conservative and violent parts of the country, where men cast proxy votes.

"Basically men coming in with large bags of voter cards for women, and voting en masse for the women of their family or for whoever," she says. It's one of the common forms of election fraud in Afghanistan.

The surge in pre-election violence, Moradi adds, could scare proportionally more women from voting, further diminishing their voice in this historic election.