Accessibility links
Some Appetizing Nibbles For Pre-Seder Snacking Passover's ceremonious meal can take a very long time. Small bites with traditional ingredients can help sustain dinner guests, with a nod to the holiday's meaning and to the spirit of hospitality.

Some Appetizing Nibbles For Pre-Seder Snacking

Some Appetizing Nibbles For Pre-Seder Snacking 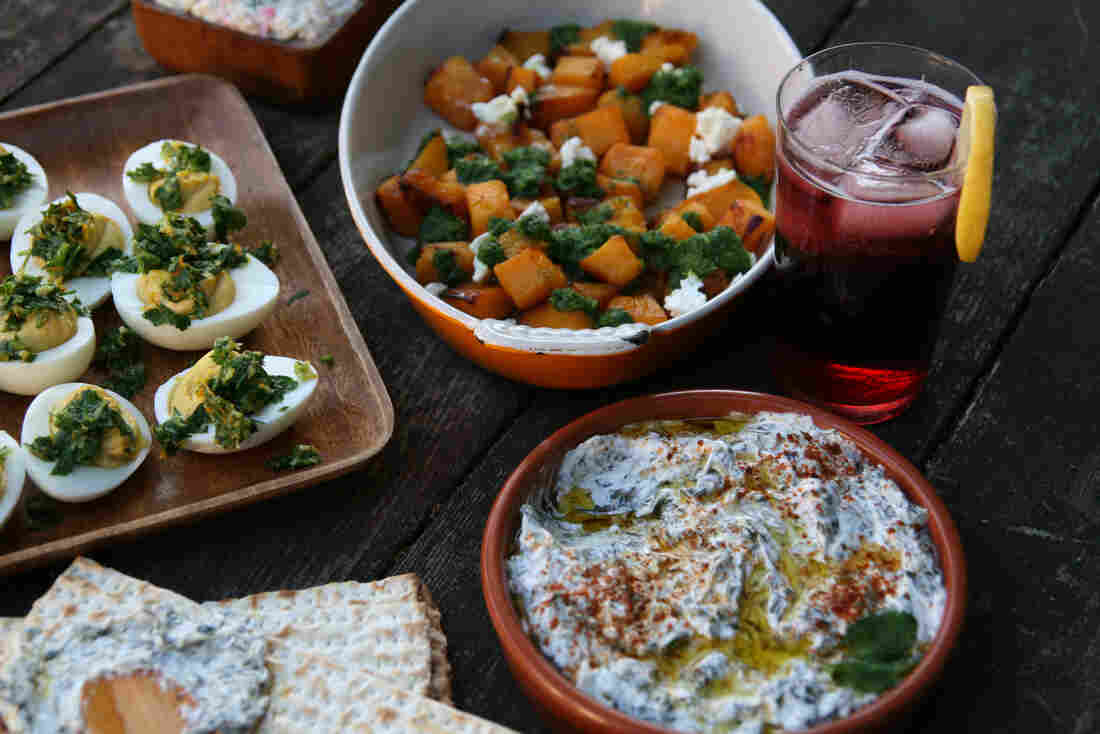 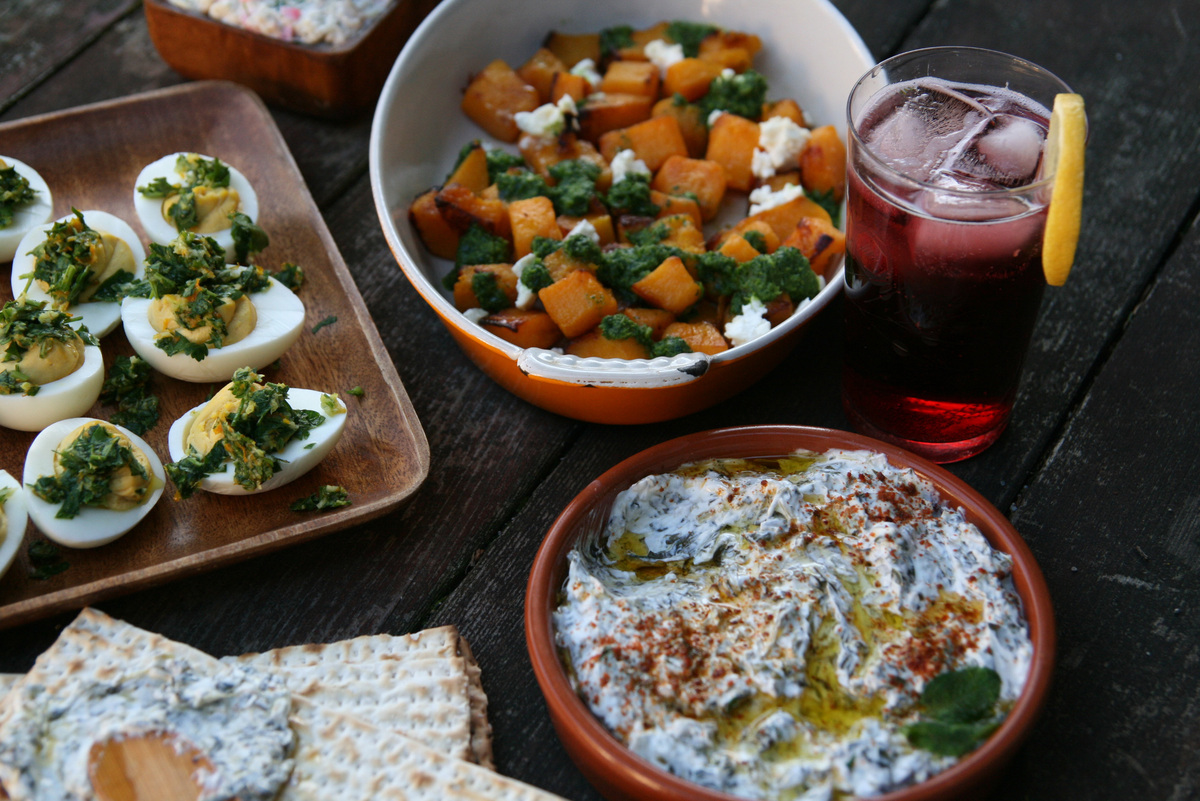 A spread of Passover snacks

The Passover Seder is usually described as a ceremonial meal: Participants sit down to a set of ritualized foods and tell the story of the exodus from Egypt. But more than just tell it, Jews are bidden to relive it. We engage in ritual and discussion and debate, until each of us feels that we've made a journey ourselves. It's a singular, time-stopping evening. But it can take a very long time.

And while there are a few ceremonial bites along the way — a bit of matzo, some horseradish — the actual "meal" part of the Seder may not happen for hours. Which means that before you start your Seder, you might want to consider some appetizers.

Yes, there are some rabbinic arguments for fasting until the meal begins, to experience some of the deprivation of the historical slavery the Seder re-enacts (and whet the appetite for otherwise-not-so-appealing matzo). Some families observe this directive, while many others try to keep the also-Jewish spirit of hospitality and make sure guests are greeted with some nibbles as they arrive.

But even those who prepare appetizers might not put all that much time and thought into them. After all, you're hosting a seated holiday meal — often for a sizable crowd. You've been cleaning the house, polishing the silver and simmering the matzo ball soup.

Appetizers? Maybe a swipe of chopped liver on matzo, next to a dish of celery and radishes. Sure, it gets the job done. And maybe it engenders some sentimental just-like-Grandma-used-to-make memories. But really, it's a holiday, celebrating freedom and the green shoots of spring. We can do better.

Deena Prichep is a Portland, Ore.-based freelance print and radio journalist. Her stories have appeared on Morning Edition, All Things Considered, Marketplace, The Splendid Table, Voice of America, The World and Northwest News Network, and in The Oregonian, Vegetarian Times and Portland Monthly. She chronicles her cooking experiments at Mostly Foodstuffs.

Still, we want to work within certain constraints. First off, nothing that involves too much last-minute fussing. Did I mention the matzo ball soup? And the brisket? And the relatives to wrangle? We want dishes that can be made in advance, with a minimum of hassle before serving.

Also, we want something that belongs to the holiday. Traditional ingredients — eggs, which symbolize the Passover offering and the cycles of birth and death; horseradish, to commemorate the harshness of slavery — let you know that even this bit of nosh is ushering in this once-a-year occasion.

And, most important, we want it to be good.

This is a time when we're sitting down to remember and re-enact the past. And we want this evening also to be one we will remember. With family, ceremony and a sense of something larger than ourselves. And snacks.

Eggs, a beautifully symbolic food, are often dipped in saltwater and eaten during the Passover Seder. Here they're fancied up into crowd-pleasing deviled eggs, topped with a spring-green gremolata. Usually used to spark up osso buco, gremolata is here given a Passover nod with a bite of horseradish, perfectly paired with sweet orange zest. 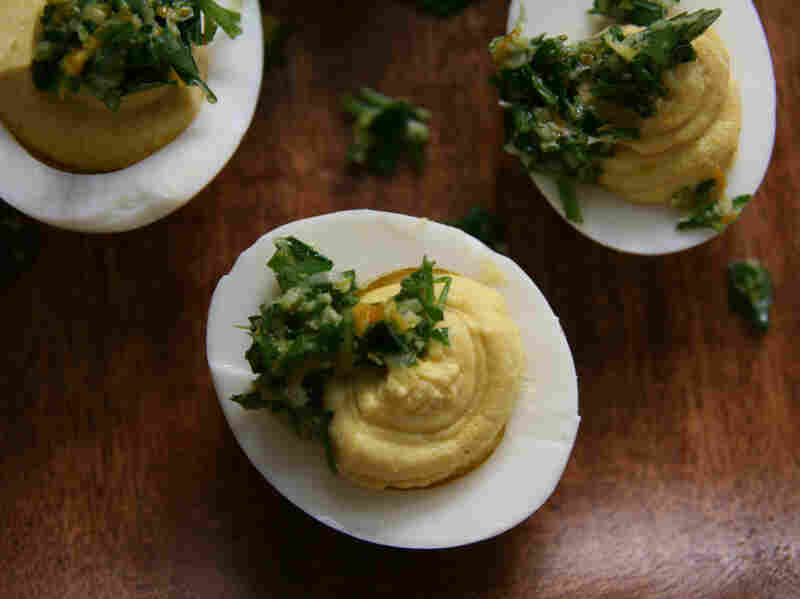 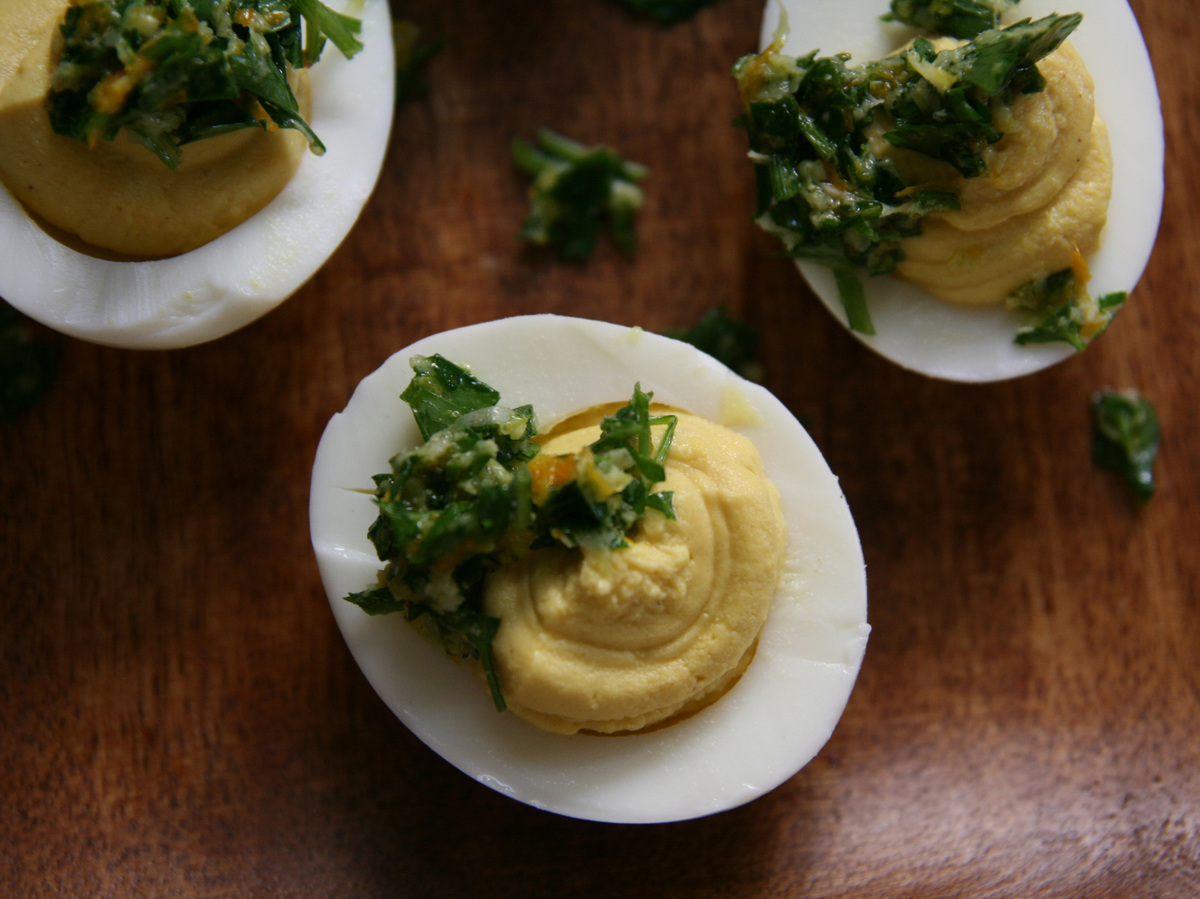 A few dashes of hot sauce or a pinch of cayenne

A squeeze of lemon juice

Place the eggs in a saucepan and cover with cold water by 1 inch. Cover and bring to a boil. As soon as the water begins boiling, turn off the heat and let stand, covered, for 10 minutes. Drain and rinse with cold water until cold enough to peel.

While the eggs are cooling, you can prepare the gremolata. Mix together the parsley, horseradish and orange zest in a small bowl, adding just enough oil to slightly moisten. Season with salt and pepper to taste, and set aside (the horseradish will mellow slightly after grating, but it should still have plenty of spunk).

Peel the eggs, cut in half and pop the yolks out into a small mixing bowl. Add the mayonnaise, mustard, hot sauce and lemon juice to the bowl. Mash until smooth (you can use a mixer if desired), add salt and pepper, and adjust seasonings to taste. Add more mayonnaise if needed for a smooth consistency.

To assemble, spoon the yolk mixture into the reserved whites (you can also pipe it into the whites using a pastry bag, or a plastic bag with a corner snipped off). Arrange on a platter, and scatter the gremolata over the top. Serve.

Yes, Passover is a celebration of spring. But if asparagus spears haven't yet poked through your soils, try this dish instead. Winter squash and feta, commonly paired in Sephardic turnovers, are here brightened up with zhoug, a sort of chili-laced Middle Eastern chimichurri (this version has significantly less fire than is standard, but still adds brightness). The resulting dish is a lovely springtime interplay of sweet and herbal, rich and briny, perfect when spread on a bit of matzo. 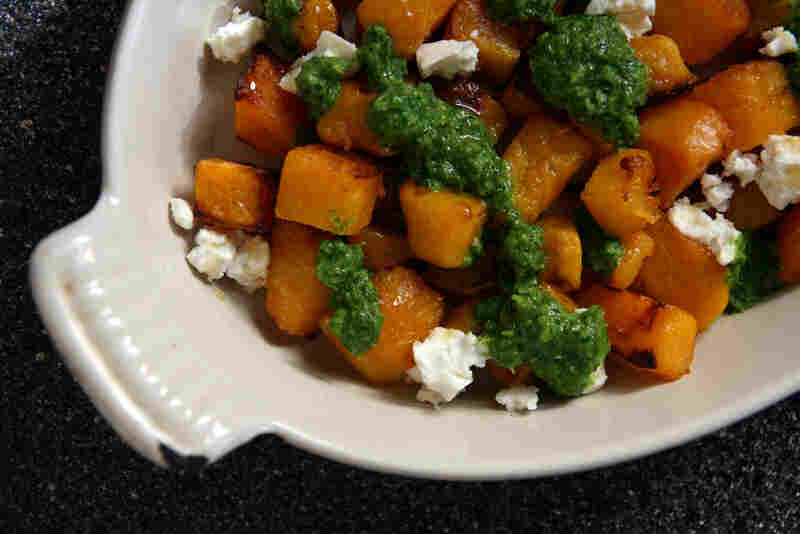 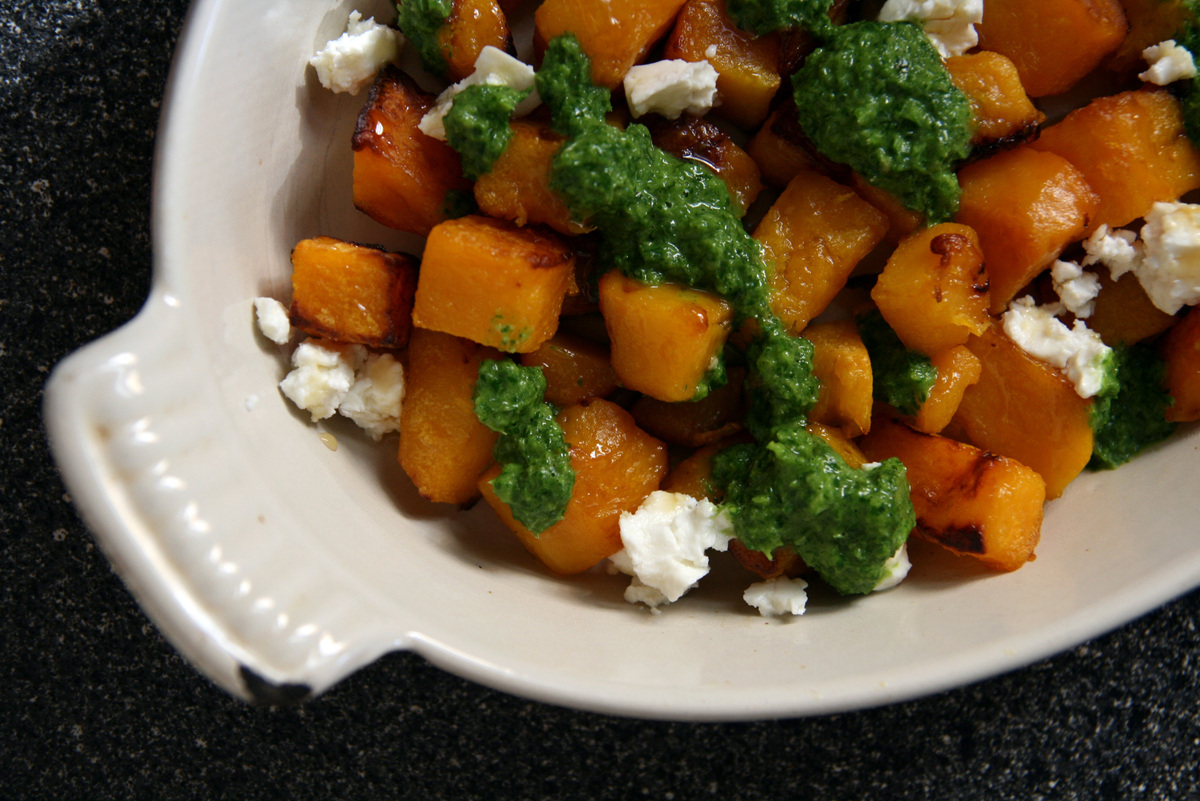 Serves 8 to 12 as an appetizer

1 fresh green chili, such as serrano, stemmed and seeded

To make the zhoug, place the garlic, chili, fresh herbs and lemon juice in a blender. Add about half the olive oil and blend, scraping down as needed. Add more oil as needed to create a balanced, pourable pesto. Season with salt to taste. Set aside.

To make the squash, preheat the oven to 400 degrees F. Toss the squash cubes with the olive oil, and roast until they're quite soft and starting to caramelize, 30 to 40 minutes. When they're almost ready, drizzle on the honey and scatter the feta cheese. Return to the oven for another few minutes, until the feta has started to warm and soften (if you want, the dish can be made in advance, then reheated at the last minute). Remove from the oven, let cool slightly, drizzle with zhoug and serve.

Although salmon, herring and whitefish get most of the attention when it comes to appetizing tables, smoked mackerel is a delicious alternative. Mackerel has a deliciously rich, oily flavor which is nicely complemented by the snap of pickled vegetables. Feel free to pickle other spring produce — green garlic, ramps, fennel stems. The sour cream adds a nice tang, but if you want a dairy-free dish, you can replace it with additional mayonnaise. The pickled radishes require advance preparation. 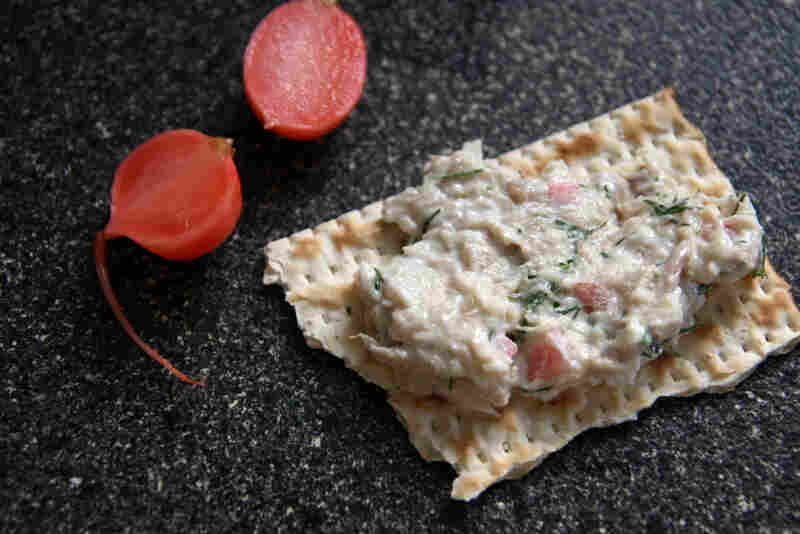 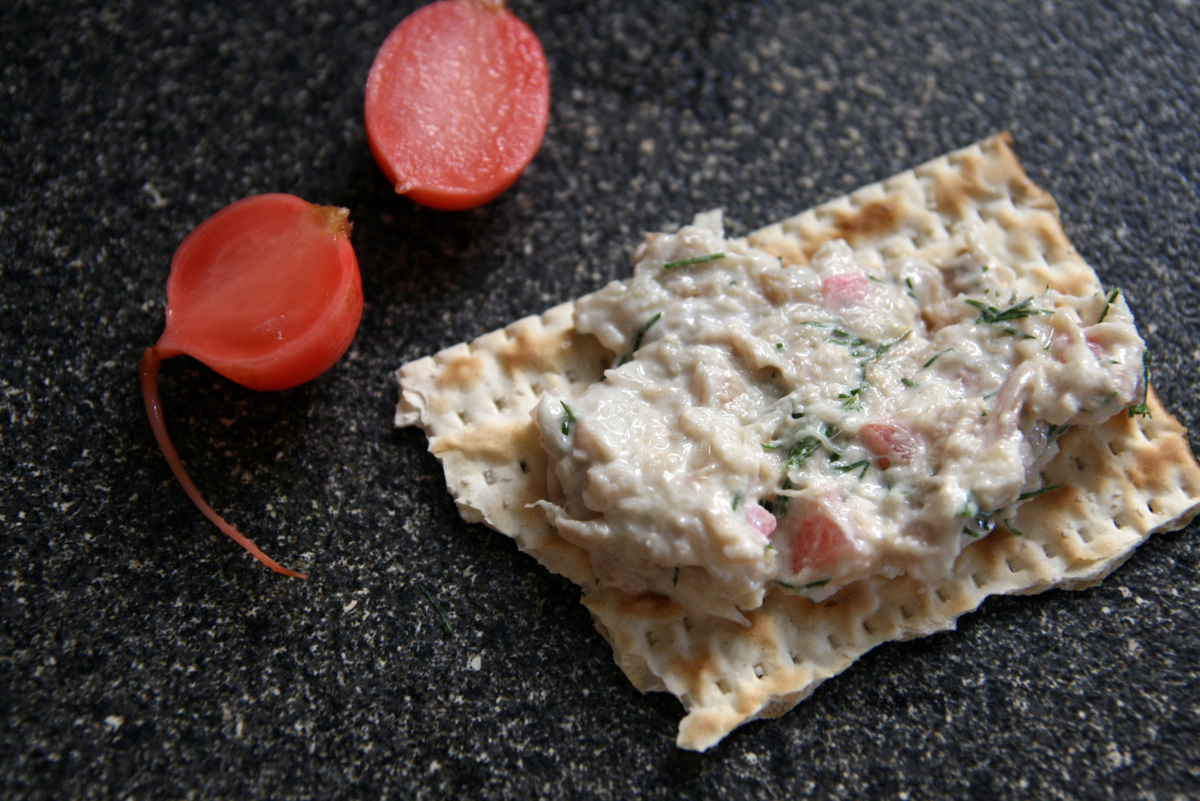 Zest of 1 orange or lemon

Begin the pickled radishes at least a day in advance. Place the vinegar, water, sugar and salt in a small saucepan, and heat until the salt and sugar dissolve, and the mixture is steaming.

Place the chili, garlic, citrus zest and radishes in a small glass container. Pour the hot brine over them, let cool slightly, then refrigerate overnight, stirring once or twice.

When you're ready to assemble the spread, fish out a handful of radishes from the brine, and dice them (you can serve the extras as snacks). Place the mackerel, mayo, sour cream, lemon juice, dill or fennel in a bowl, along with the diced pickled radishes. Stir to combine, adjust seasonings to taste, and serve.

Mint And Spinach Dip With Lebneh

Using lebneh (Middle Eastern yogurt) instead of sour cream, and fresh mint instead of caramelized onions, this puts an interesting Holy Land spin on the standard spinach dip. Serve with matzo. 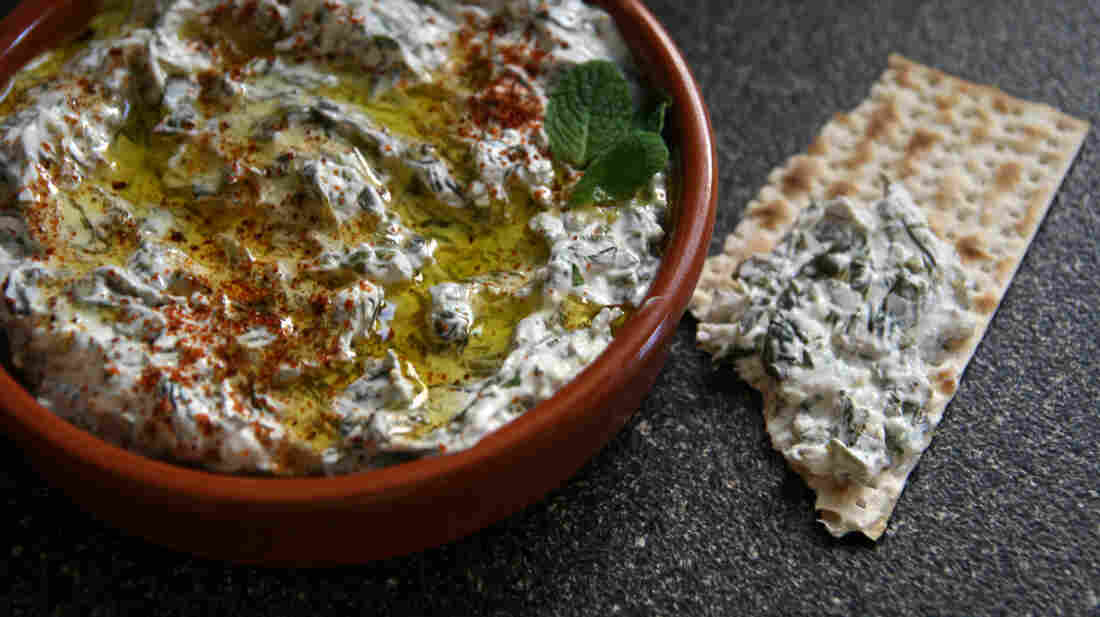 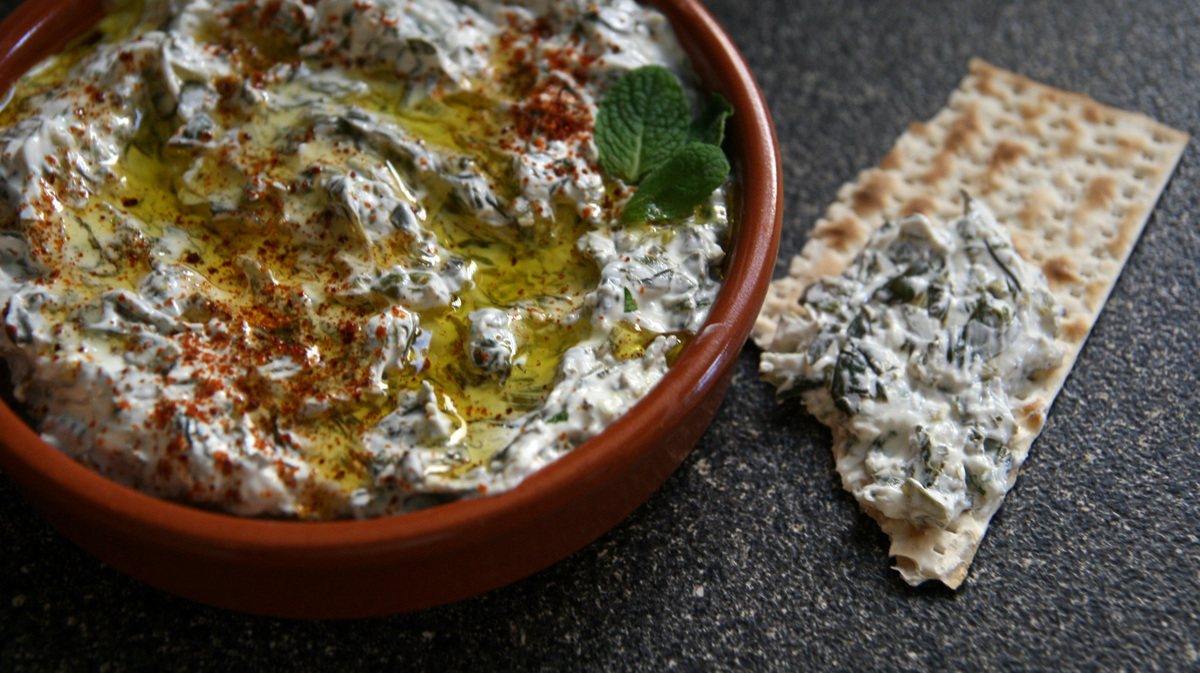 Bring a large pot of salted water to a boil, and have a strainer at the ready in the sink. Add the spinach to the pot and cook for a minute or so, until it turns bright green and softens. Pour out into the strainer, then rinse with cold water to stop the cooking. Press it against the strainer to wring out as much water as possible.

Mix the blanched spinach with the lebneh, garlic and mint. Add salt and pepper to taste. Spread into a serving dish, top with a drizzle of olive oil and serve.

Admittedly, Manischewitz is a terrible wine. But for many, it wouldn't be the holiday without it. So why not play to its strengths? This treats the sugary plonk more like a flavored syrup, lightening it up with seltzer and lemon for a perfect appetizer pairing. If you want to go the extra mile, try freezing ice cubes with some parsley sprigs. 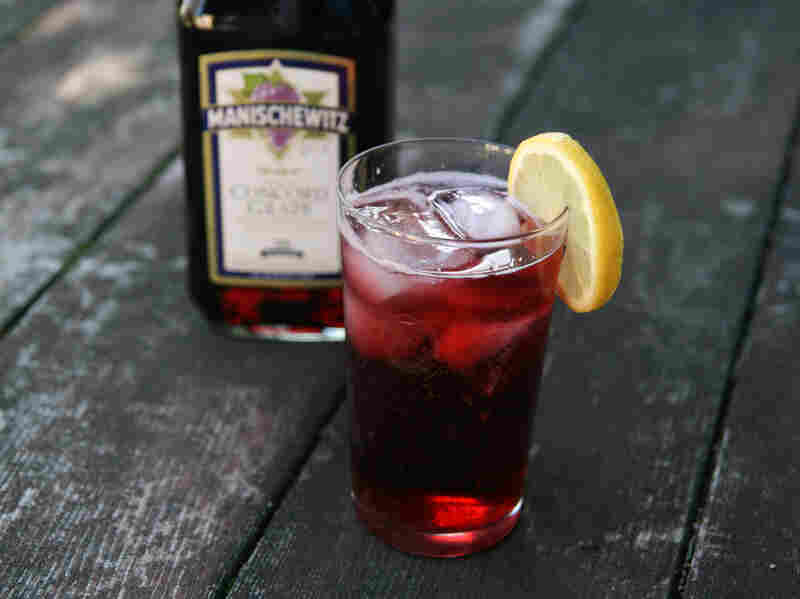 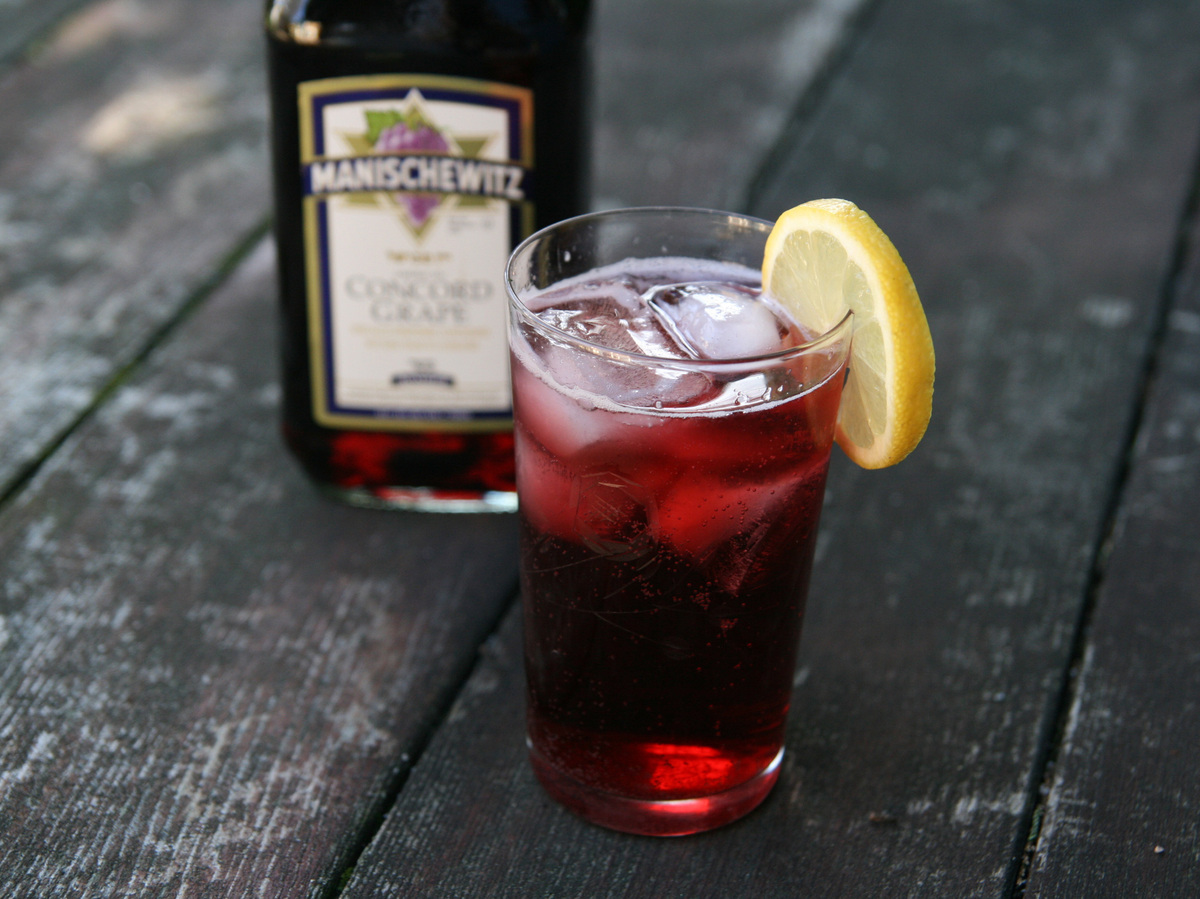 Pour a highball glass halfway full of Manischewitz and top off with an equal amount of seltzer. Add a lemon slice and ice cubes and serve.