Accessibility links
Edie Falco On Sobriety, The Sopranos, And Nurse Jackie's Self-Medication Falco plays ER nurse Jackie Peyton, who is competent at her high-stress job but struggles with addiction. The sixth season of Nurse Jackie begins Sunday on Showtime.

This interview discusses the plotline of Nurse Jackie through the end of season five and beginning of season six. 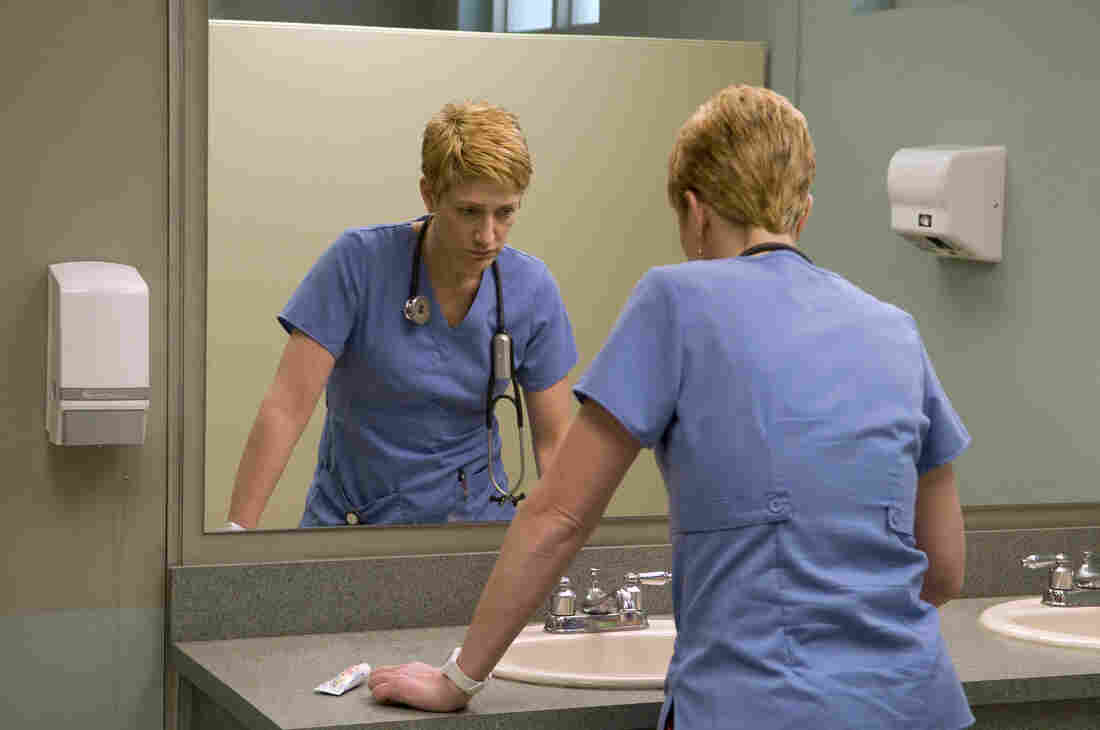 In Nurse Jackie, Edie Falco plays an ER nurse who does a lot of self-medicating. Addicted to pills, she finally got sober last season and started going to 12-step meetings. But she saved one pill, and right before going to the party celebrating one year of sobriety, she took it. In the sixth season, which starts Sunday on Showtime, Jackie is back on pills and back to hiding her addiction.

Falco gave one of the great performances in TV history as Carmela Soprano on The Sopranos. She joins Fresh Air's Terry Gross to talk about both of those roles, as well as her own experiences with sobriety, breast cancer and parenthood.

I was a really compliant sort of kid. I was a bit of a goody-two-shoes, which annoyed my siblings to no end. I was the one who would tattle if I smelled pot smoke coming from the other end of the hallway. Like, "Mom, I don't want to say anything but ..." But I did. I got a reputation. ...

I get to live it out now. It's one of the beauties of the thing I do for a living. ... It feels tremendously good to act out in anger and feel righteous about it and not have there be any real ramifications is exquisite, yes, I recommend it. ... And then they yell "cut," and I can give a big hug and kiss to whatever child I'm acting opposite, which I always do because it's mortifying. 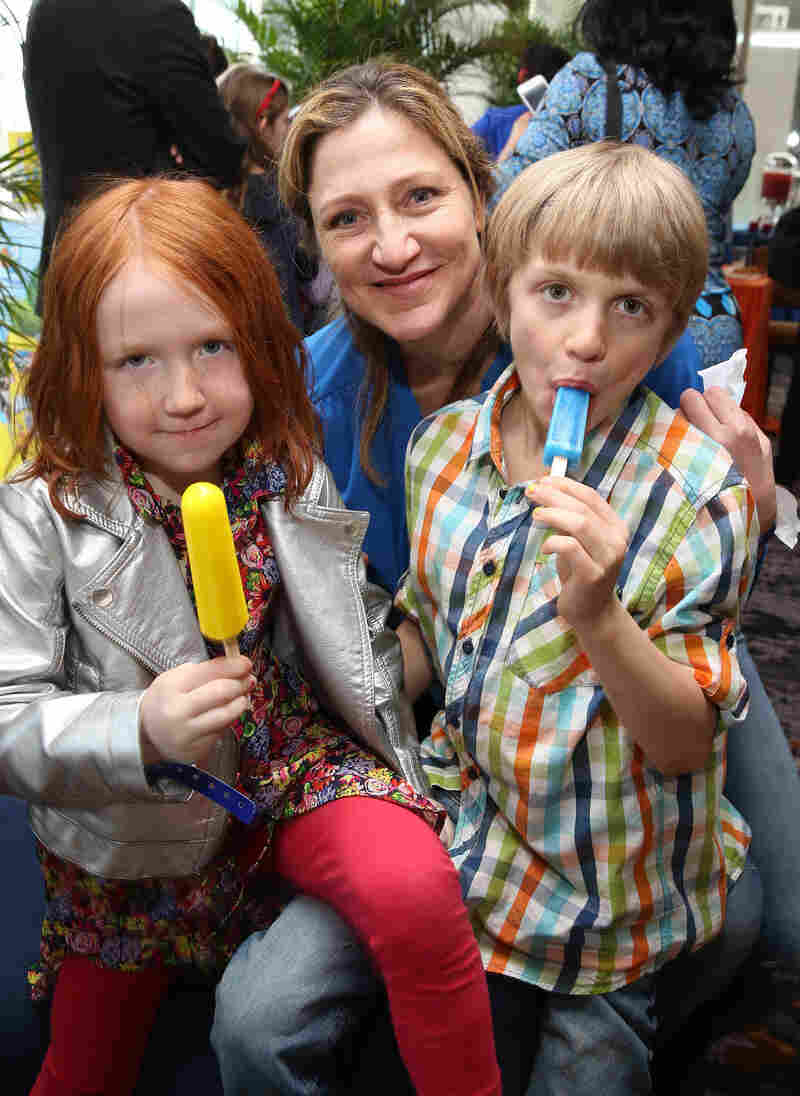 Falco and her children, Macy and Anderson, enjoy a frozen treat at the Rio 2 screening after-party in New York in March. Amy Sussman/Invision for Popsicle/AP hide caption 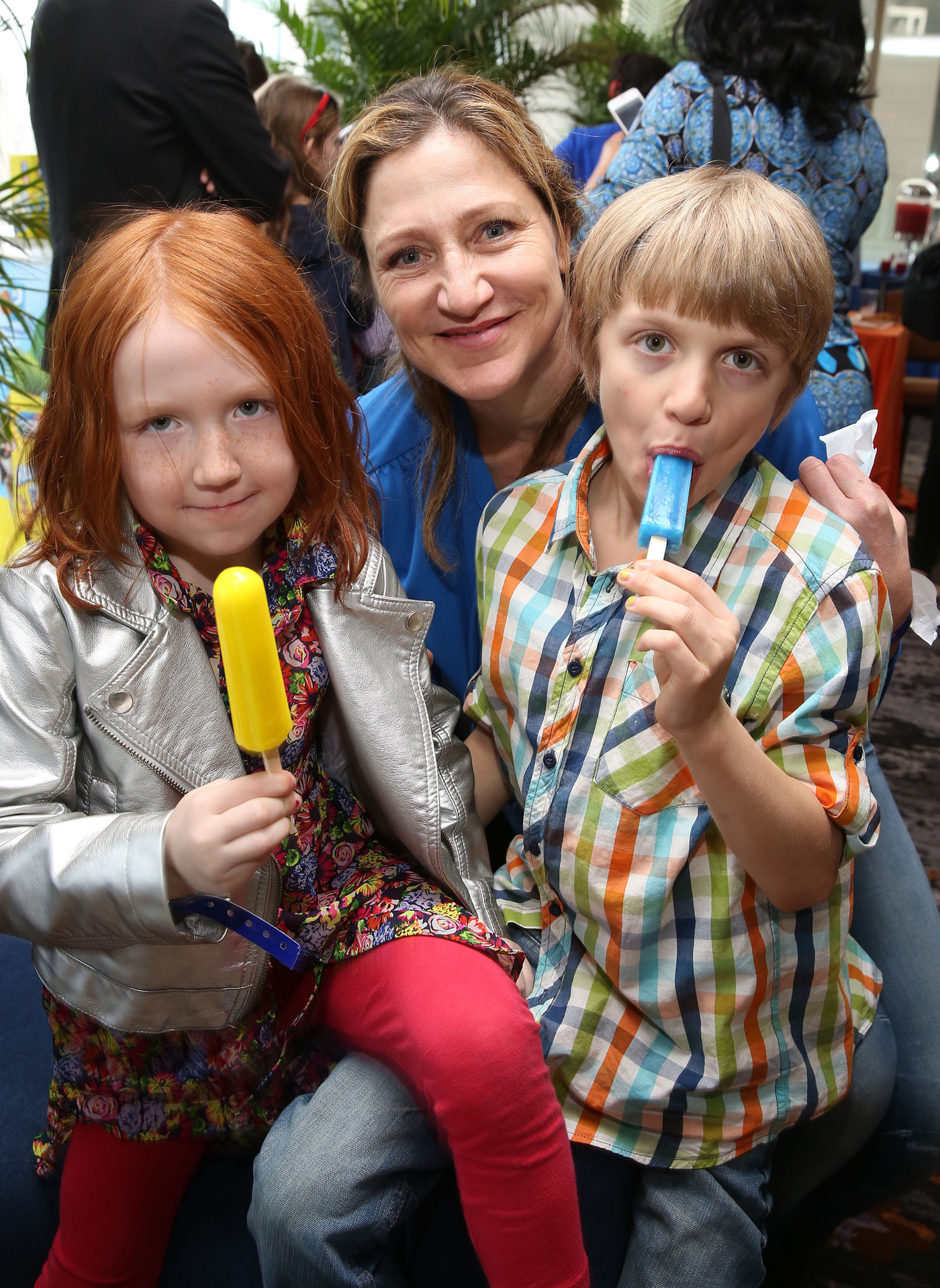 Falco and her children, Macy and Anderson, enjoy a frozen treat at the Rio 2 screening after-party in New York in March.

On parenting, on-screen and off

The things that go on in parenting I have been shocked by — my own reactions to things, my children's reactions to my reactions — they kind of are otherworldly. There's very little that brings out more deep-seated stuff than the parent-child relationship, I've found. ... You don't even know what's going to come out of your mouth when you feel as helpless as you sometimes do in the face of a smart kid. ...

This is going to be terrible, but I'll tell you: My son had an issue with coming into my bed — this is some years ago now — and he kept coming ... in the middle of the night when I'm half asleep. I was working at the time, I was getting four or five hours of sleep, and he came into my bed and I think the words were, "If you don't get out of my bed I will throw you down the stairs." My son looked at me wide-eyed and went back to bed.

I'm like, "Anderson, I'm sorry! I'm not responsible for what I say at 3:00 in the morning when I'm not getting sleep." It's really insane what happens under dire circumstances, lack of sleep, and you know, kids who want their way.

On her own struggle with addiction, and whether it draws her to certain characters

I have to say, I never really know what makes me want to do a role. It's some sort of wordless place, you know? I imagine that everything I've ever been through is contributing on some level to the decisions I make, but I'm not privy to them. ...

The addiction piece, I have to say, is a huge part of my life. Not just my own, but that of many people I love. The helplessness around that, and learning to deal with that, and all the various 12-step programs I've been a part of over the years, and how much they've helped me, and how hard it is to love somebody who is going through that and remain distant enough to not let it crush you each time. All that stuff is of tremendous interest to me. That keeps me very deeply involved in Jackie's journey. 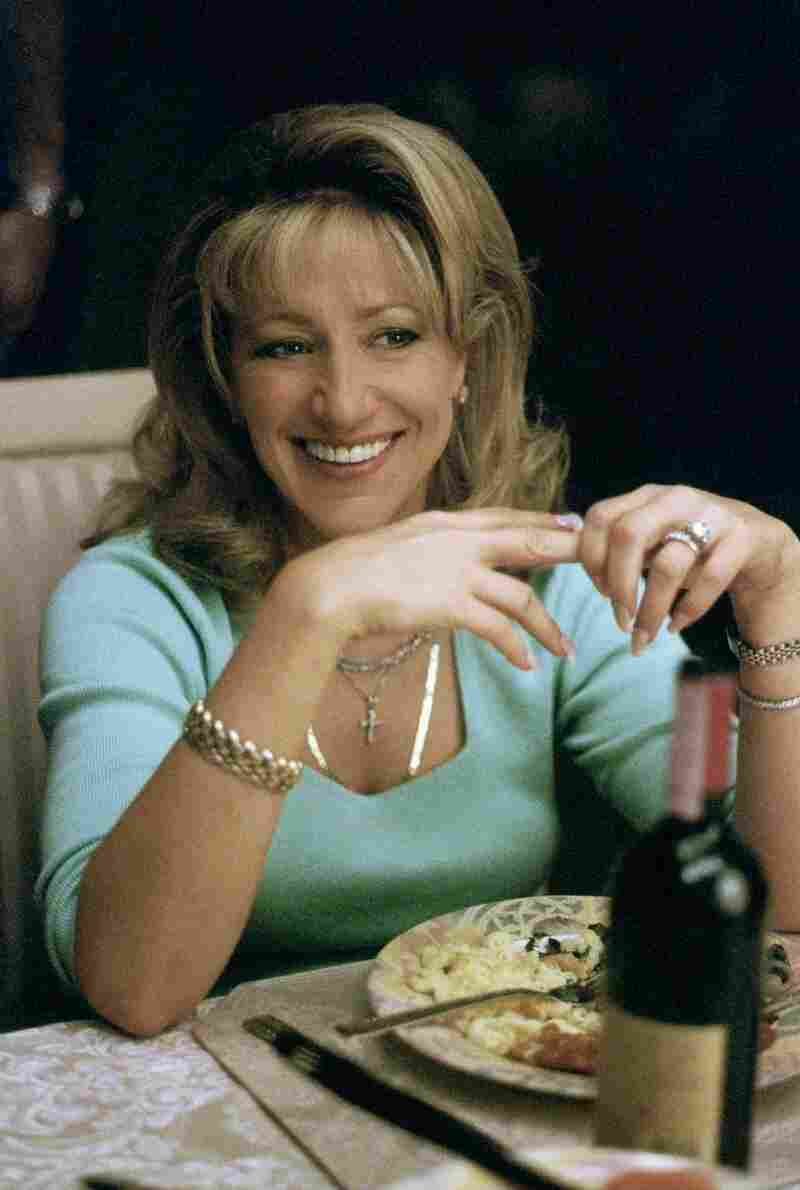 Falco played Carmela, wife of mob boss Tony Soprano on HBO's The Sopranos. She didn't expect anything to come of the audition and was shocked when she got the part. "There's something very powerful about going in to just do it for the heck of it," she says. Getty Images hide caption 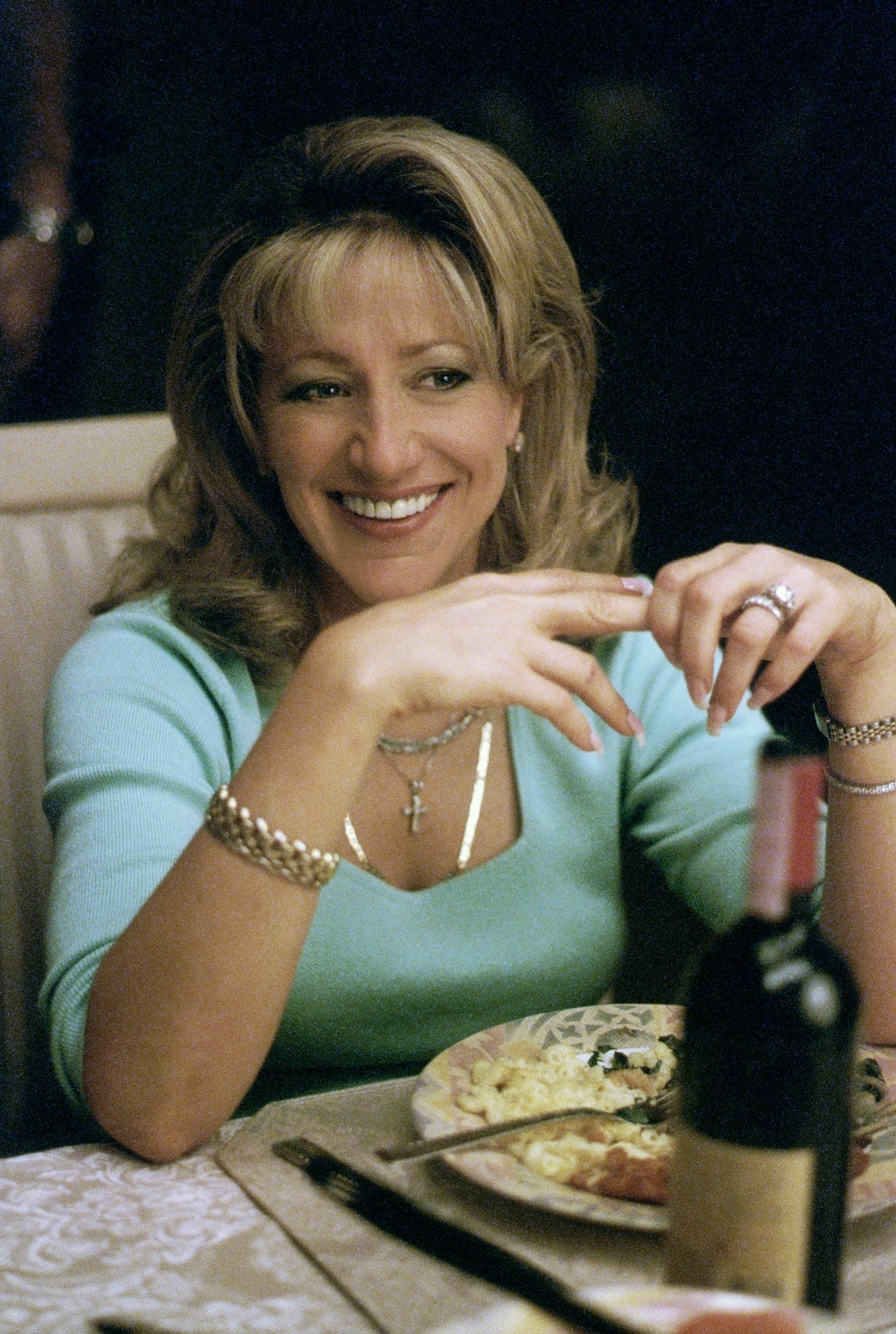 Falco played Carmela, wife of mob boss Tony Soprano on HBO's The Sopranos. She didn't expect anything to come of the audition and was shocked when she got the part. "There's something very powerful about going in to just do it for the heck of it," she says.

On Carmela, the character she played on The Sopranos -- and specifically Carmela's outfits

Carmela's nails were a whole thing. ... She could never really touch anything. There was always this miniscule distance between her and everything in her environment. ... When I've looked at it, it seems like my hands were always up, bent at the elbows, almost like the nails would hit something if she went too close, or something. That was a big part of it. ... That she was somehow protected by armor from her whole environment in one way or another, internally and externally. ...

I would go into the trailer on Sopranos and I'd be in there for two hours between the hair curling and straightening and pinning and tons of make-up and the nails to put on and the jewelry, and the costume itself. There was a whole order in which I had to do these things.

On being diagnosed with breast cancer while filming The Sopranos

It helped me to just keep moving, to not have it be this huge comma in my life where everything waited. I was able to pretty much keep up my schedule and go through what I needed to go through. I wouldn't have done well if everybody had known.

Edie Falco, on being diagnosed with breast cancer while she was filming The Sopranos

I found out in the morning, and then I had to go to work, and I told very few people, but I told the producer. ... I said, "I have an opportunity to meet this doctor in an hour, can I go and do that and then come back and shoot?" And that's what I did. I met this one doctor who talked me through the next step or whatever, and then I went and shot a couple of scenes after that, and that was pretty surreal.

I don't remember a whole lot of that day except that I was not there much at all. And it was OK because there were scenes where [James Gandolfini] and I were ... something about walking in a parking lot with a bag of groceries, and I had to drop the groceries or something.

It's funny; I have very weird memories of that day. But it helped me to just keep moving, to not have it be this huge comma in my life where everything waited. I was able to pretty much keep up my schedule and go through what I needed to go through. I wouldn't have done well if everybody had known.

On auditioning for The Sopranos

I went in, and I just did exactly what this character should be in my mind, from my estimation — also knowing that there was no way I'd get cast because I was not the stereotypical Italian-American-looking actress, and I knew who was. There's something very powerful about going in to just do it for the heck of it.

You know, there's a huge lesson in there. The pain in life is contingent upon one's expectations for the most part. ... So I was calm and relaxed. ... I think I got a call that day or the next day. ... It was a monstrous sum of money for me at the time, and all I thought was, "I cannot believe I can pay off my student loans with one check." ... I broke out in a sweat at the size of that relief.