Accessibility links
Drilling Frenzy Fuels Sudden Growth In Small Texas Town The boom has brought unexpected prosperity — and many new problems — to Cotulla. It's in the heart of the Eagle Ford Shale area, which has quickly become the nation's No. 2 oil-producing region. 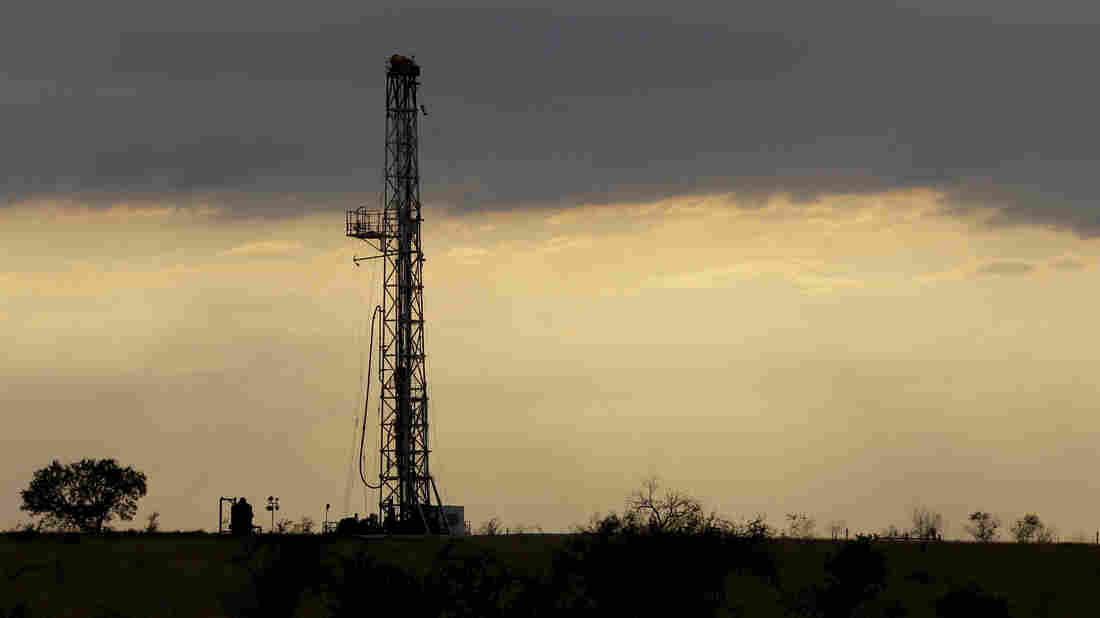 More than 8,000 oil and gas wells have been drilled along the Eagle Ford Shale formation in six years. Eric Gay/AP hide caption 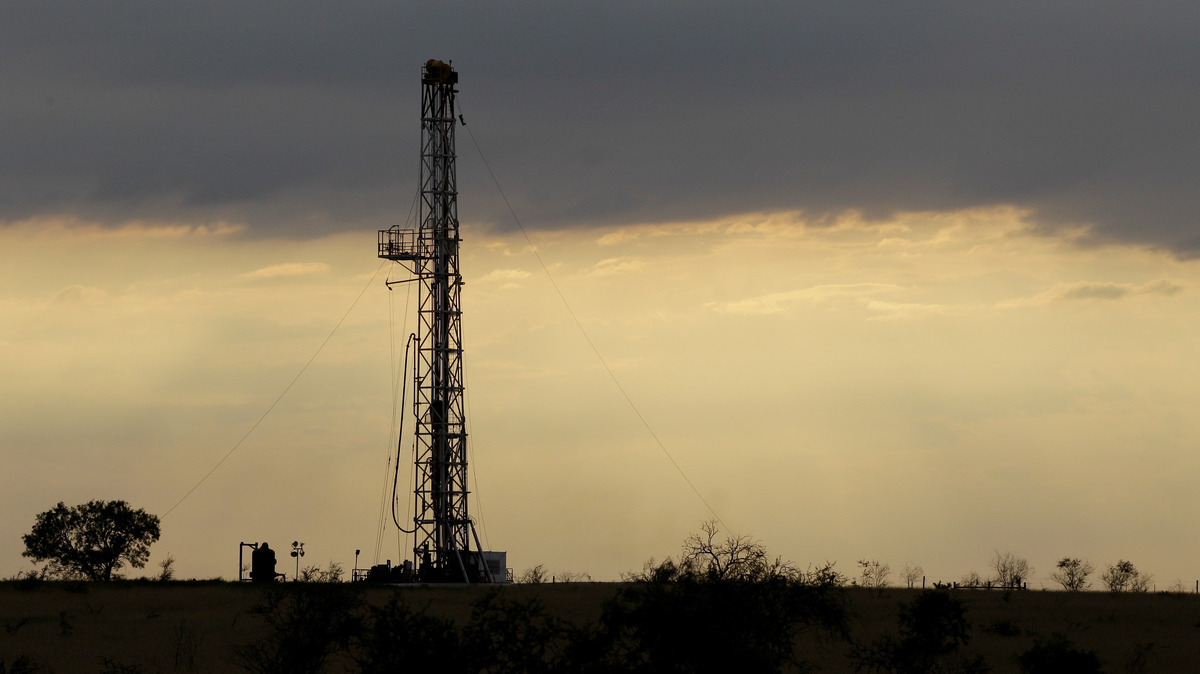 More than 8,000 oil and gas wells have been drilled along the Eagle Ford Shale formation in six years.

South Texas is in the midst of a massive oil boom. In just a few years, it has totally transformed once-sleepy communities along a crescent swoosh known as the Eagle Ford Shale formation and has brought unexpected prosperity — along with a host of new concerns.

Among the towns drastically changed by the drilling is Cotulla, southwest of San Antonio, about 70 miles up from the border with Mexico. The area is called brush country — flat, dry ranch land, scrubby with mesquite and parched by drought.

Before the boom, jobs were few and poverty was high. Then, in 2008, oil company Petrohawk drilled the first discovery well, 2 miles deep into shale. It was successful and led to a drilling frenzy.

Now after just six years, more than 8,000 oil and gas wells have been drilled, with permits granted for 5,000 more. They're pumping more than 1 million barrels of oil a day, making it the No. 2 oil-producing region in the U.S.

Train cars roll into the Gardendale rail yard bearing miles of pipe and vast quantities of the chemicals and sand used in hydraulic fracturing, known as fracking. 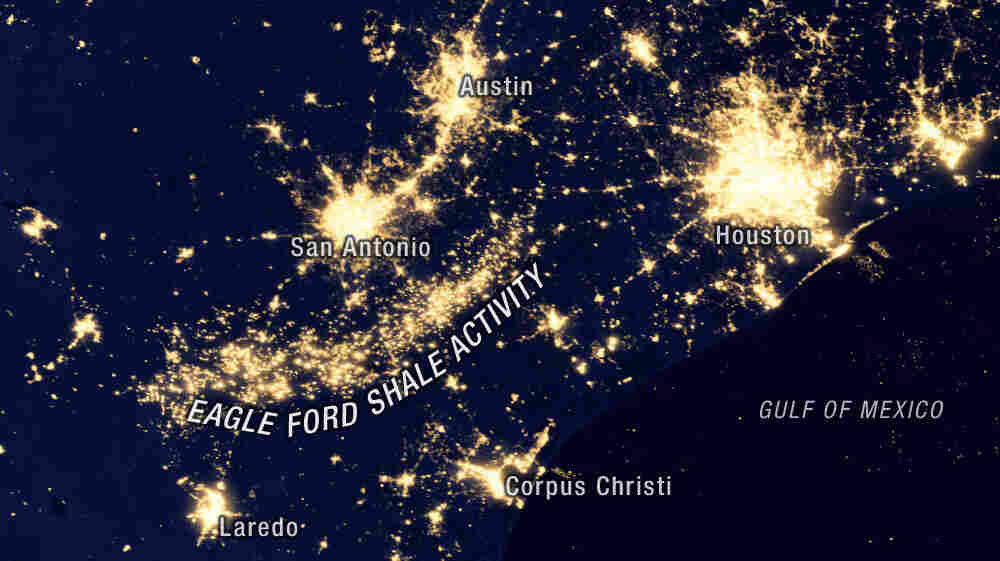 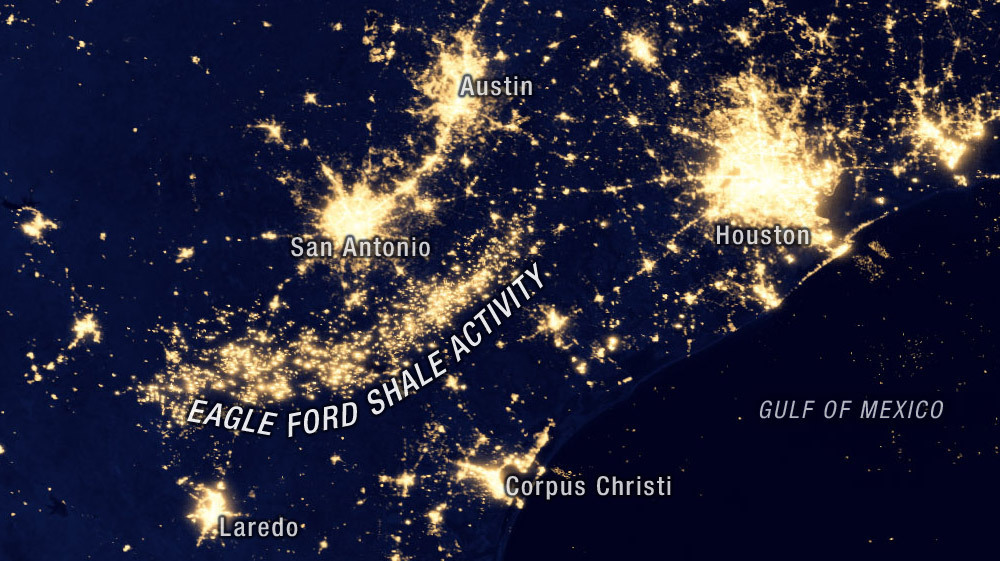 This nighttime NASA satellite image from 2012 shows lights from drilling sites and natural gas flaring along the Eagle Ford Shale.

Dying On The Vine

"It was a rural town and like rural America, it was dying — dying on the vine, as they say," he says.

Dovalina has seen city revenues from sales taxes rise nearly nine-fold in six years. The property tax base has risen from $50 million in 2008 to nearly $200 million, with the end far from sight. Those revenues will go to beef up infrastructure — water, gas and roads — which are all under intense strain with the sudden growth.

This video shows the growth in permits and wells in the Eagle Ford Shale region since 2008.

For those who've leased mineral rights on their land to the oil companies, it's meant a windfall. Dovalina says he heard a story of a man who wanted to quickly deposit a $100,000 check because it was making him nervous.

The Eagle Ford boom has brought with it lots of complaints about the heavy truck traffic. And with the influx of thousands of outsiders, the sheriff's department is contending with a spike in crime: theft, drugs and prostitution.

Sgt. Rickey Galvan was born and raised in Cotulla in a very different time.

And what will the future of towns like Cotulla look like? Texans know well the cycles of boom and bust — many places that were once the hot new thing for oil exploration are now ghost towns.

"This is where my family grew up," he says. "My grandparents worked these lands."

They were sharecroppers and Martinez grew up picking cotton, watermelons and onions. Now some of that old farmland is being turned into a sports park that will bear his name.

The transformation doesn't end there. Bright orange gas flares burn high above the ranch land and pumpjacks dip to the ground, like giant mechanical birds. Semis barrel down the roads, carrying gravel and sand and pieces of rigs in; oil out. There are now 19 hotels where there used to be three.

"Somebody knows something because they keep building them," Martinez says. "Everybody is concerned at the end of the day that there's going to be a lot of hotels and not enough business."

Martinez thinks a lot about where this is all heading. He's chairman of the Eagle Ford Consortium, a group of local stakeholders who are working with the oil companies to make the most of economic development and try to keep it sustainable.

"I've always called it wanting to be normal; you know, having what other communities have," he says.

Darrell Brownlow, a rancher, has also had a close-up view of the oil industry's intersection with the land. Brownlow and his father used to run cattle on 1,000 acres, but Brownlow had to sell off his herd with the drought.

Now he's leased part of the land to Chesapeake Energy. The company has dug a deep well on the dusty ranch and a 3-acre pond to supply water for fracking operations. It's a rare thing to have in drought-stricken Texas. It will allow Brownlow to irrigate, and the oil money means he can afford to rebuild the ranch and bring back cattle.

"It's progress — it has provided opportunity beyond belief; beyond what anybody could have imagined," he says. 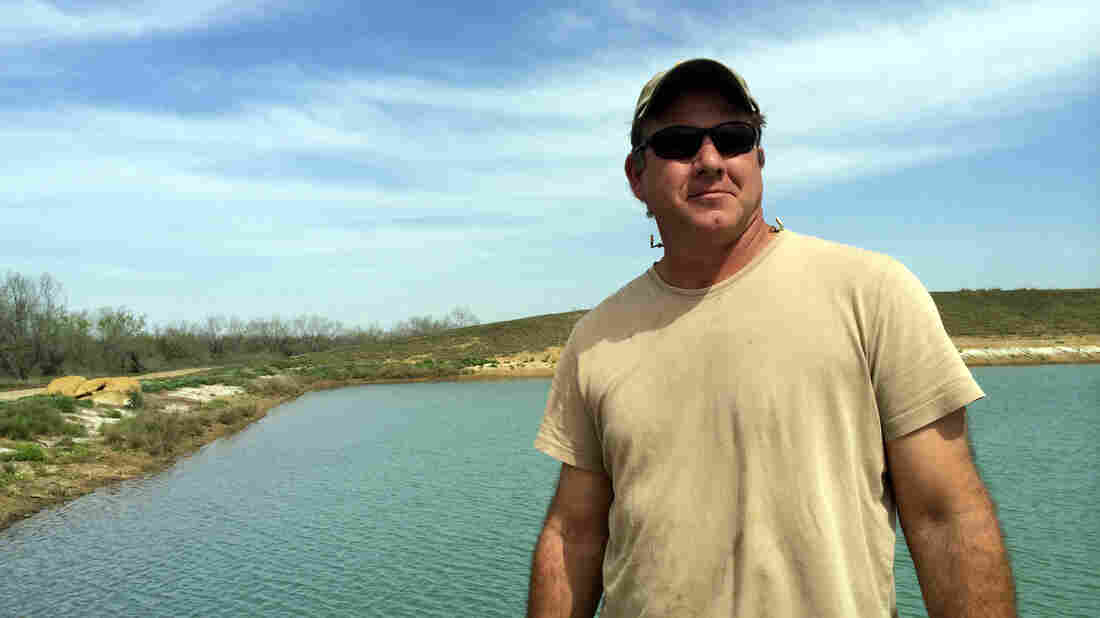 Rancher Darrell Brownlow stands in front of the pond Chesapeake Energy dug on his land when he leased part of it to the company. It will allow him to irrigate, and the oil money means he can afford to rebuild the ranch and bring back the cattle. Melissa Block/NPR hide caption 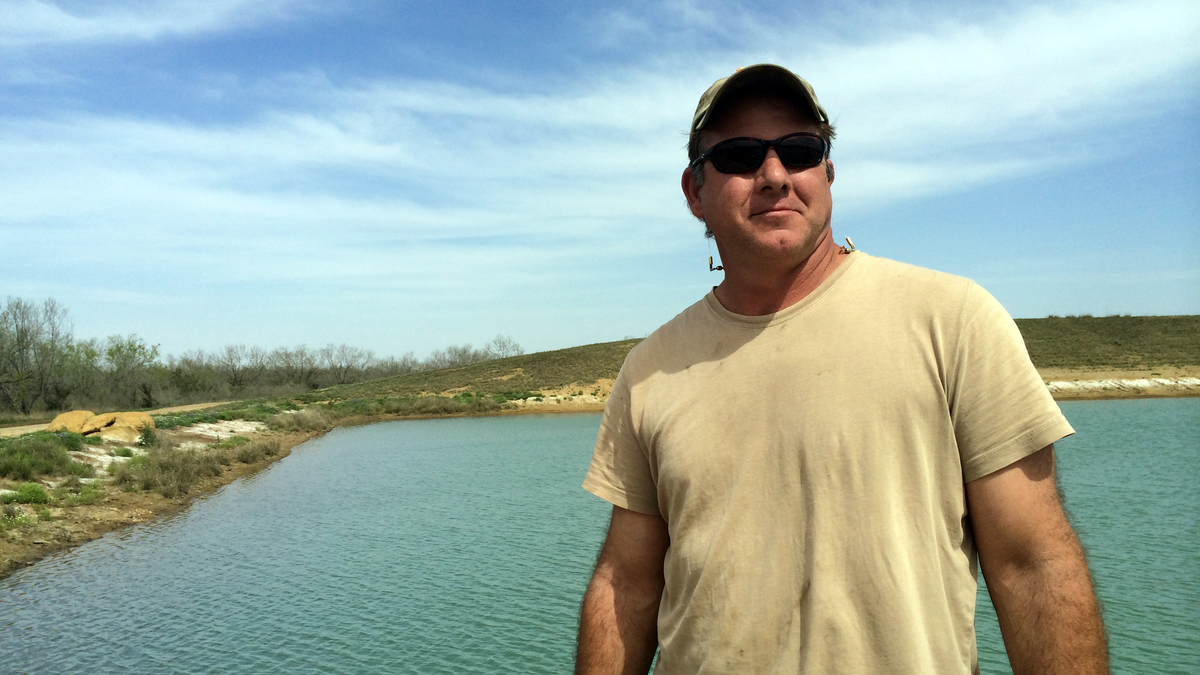 Rancher Darrell Brownlow stands in front of the pond Chesapeake Energy dug on his land when he leased part of it to the company. It will allow him to irrigate, and the oil money means he can afford to rebuild the ranch and bring back the cattle.

While out on the ranch, Brownlow points to two pumpjacks. Gas is flaring off nearby with a sign warning of possible emissions of poison gas — the extremely toxic hydrogen sulfide.

There are, of course, a lot of environmental and health concerns that accompany fracking.

Jim Morris spent months reporting on air pollution connected to the oil industry in South Texas and the health effects on some residents. Morris is with the Center for Public Integrity and led the eight-month investigation with InsideClimate News and The Weather Channel.

He describes the emissions from Eagle Ford Shale fracking as "a toxic soup of chemicals" that include benzene, formaldehyde, sulfur dioxide and more.

"We reviewed about 300 complaints that had been filed by citizens of the Eagle Ford with the Texas Commission on Environmental Quality," he says. "Headaches, nausea, breathing difficulties, nosebleeds. And when you look at the science on some of the chemicals that are coming out of these operations, you see those are the very symptoms that would be expected to be associated with emissions from the oil and gas industry."

He says the commission has a poor track record for monitoring toxic chemicals in the air and enforcement.

Those in the oil industry say there's no evidence the emissions cause any harm.

You can hear Melissa Block's interview with Morris on Friday's All Things Considered.