Accessibility links
A Year After Bombings, Some Say 'Boston Strong' Has Gone Overboard The slogan is plastered on cars, cut into the grass at Fenway, tattooed on arms, bedazzled on sweatshirts and printed on T-shirts (and everything else). But some wonder whether it's time to retire it. 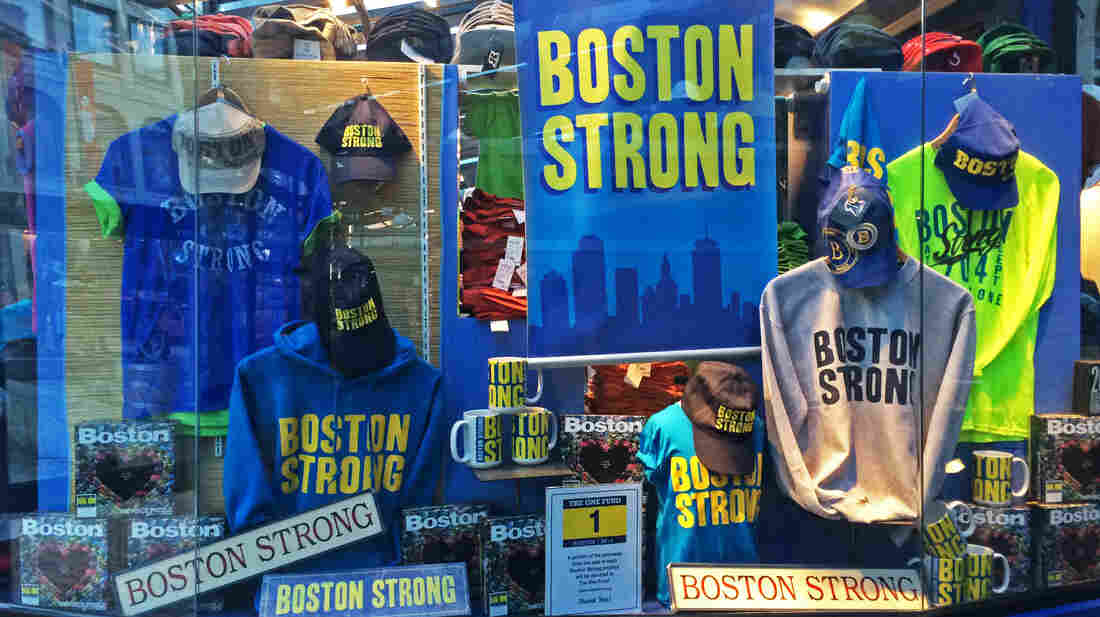 The phrase Boston Strong sprang up after last year's marathon bombings and is now ubiquitous around town. But some wonder if the commercialization of the slogan also trivializes the tragedy. Tovia Smith/NPR hide caption 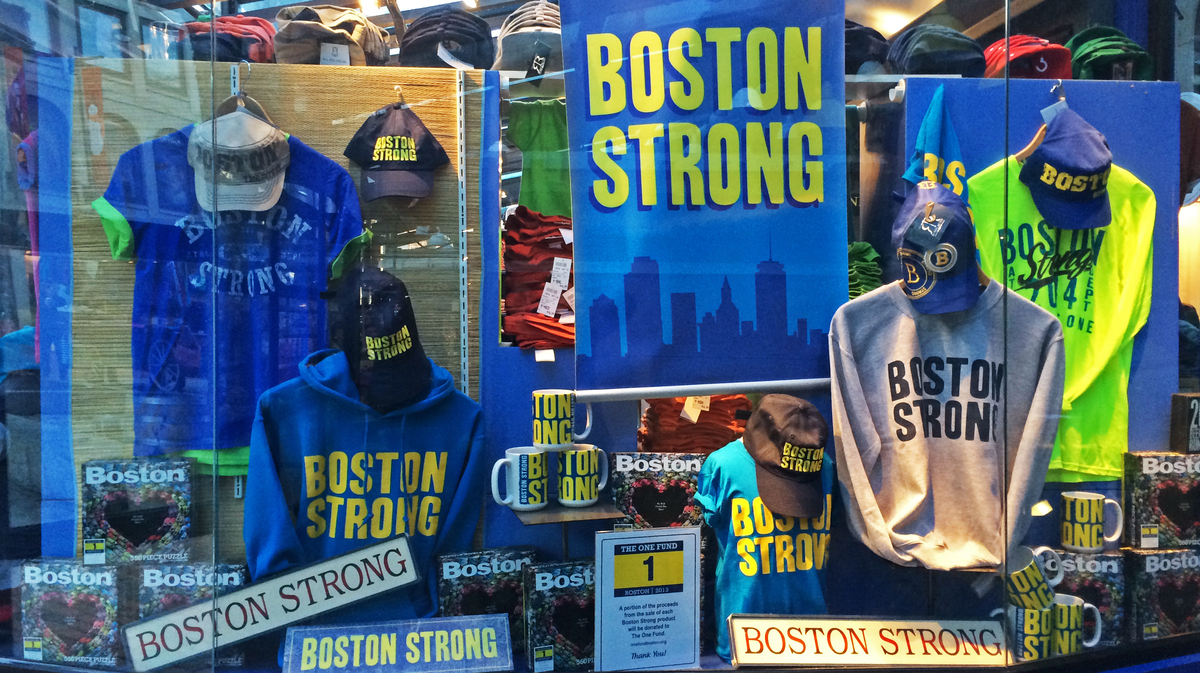 The phrase Boston Strong sprang up after last year's marathon bombings and is now ubiquitous around town. But some wonder if the commercialization of the slogan also trivializes the tragedy.

The phrase Boston Strong emerged almost immediately after last year's marathon bombings as an unofficial motto of a city responding to tragedy. But now some are wondering whether the slogan is being overused.

The words are everywhere: Boston Strong is plastered on cars, cut into the grass at Fenway, tattooed on arms, bedazzled on sweatshirts and printed on T-shirts (and everything else).

"We have Boston Strong bracelets, we have car magnets, little money pouches, we have mints," says Catherine Thomas, manager of a souvenir shop in Quincy Market. Boston Strong continues to sell strong, she says.

"I think it's not a shirt, it's an attitude that people have: You are Boston strong," Thomas says.

The first Boston Strong T-shirts were designed just about two hours after the bombing last April 15 and were sold that very day. Emerson College students Nick Reynolds and Chris Dobens say they figured their shirt was so good they might even sell 100.

Now they're up to 66,000, and with 100 percent of their profits going to the One Fund — the main marathon charity — their total donation is now more than $1 million. Dobens calls it a movement. He says the message Boston Strong really resonates with people who, at least for a moment, felt anything but.

"It's a community in itself when people wear those shirts and they show that they have support for Boston Strong," Dobens says.

Getting the shirt, he says, is as important to people as giving the donation.

"It has this idea of like, I have proof that I helped. I can show people that I really, really care about the people that I'm helping," Dobens says.

But it's that "showy" part that makes some people squirm at the whole Boston Strong phenomenon.

Psychologist and author Joseph Burgo says he understands the underlying feelings of solidarity and defiance, but he can't help but cringe at people feeling that their every sentiment has to be tweeted or posted or — literally — worn on their sleeves.

"I mean, why wear anything? I think there's a kind of a feeling that unless you share your experience with other people it isn't entirely real to you unless you announce it to other people," Burgo says. "It's just part of this narcissistic culture of ours where everything is about self-display."

It's almost as if people are using the Boston Strong brand to brand themselves, which raises a whole other concern that Boston Strong is not actually a brand and isn't trademarked — so anyone can sell it, regardless of whether any money goes to charity.

For example, at another souvenir shop in Boston, an array of Boston Strong T-shirts and other mementos — hats and puzzles and coffee mugs — is piled up on a display in the center of the store. But it's unclear to tourists shopping there which products send money to the One Fund.

It's also unclear at a nearby outside pushcart where Dennis Callahan sells similar shirts. When asked if he will earmark any proceeds for charity as he did last year, he says he's going to "re-evaluate and see how it goes."

It may not be intentional, but customers are being misled, says Gayle Sulik, a sociologist at the University of Albany, SUNY, who studies pink ribbon marketing for cancer. And even if some money is donated, Sulik says, cause marketing often leaves charities with less, not more.

"I've heard the term 'slacktivism' used to kinda describe this idea that symbolic support is actual support: I bought that T-shirt so I really did contribute," she says. "But if we stop there — and we tend to stop there — then that's where we're feeling short."

Some have called for official labels to clarify exactly what, if anything, is being donated — kind of like nutrition labels on food. But Dobens, one of the original Boston Strong T-shirt-makers, says that won't happen until consumers demand it.

For now, Boston Strong remains a big seller and the slogan still somewhat sacrosanct in the city. When one local reporter dared tweet that he was sick of it, he was pilloried.

Reynolds, the other original shirt-maker, says there will come a time to retire the slogan.

"I think some would say that we've already reached that moment," he says. "I think it's sort of taken on an 'I Heart New York' sort of touristy 'I went to Boston this weekend' sort of thing." But that doesn't mean Reynolds is ready to quit selling his Boston Stong T-shirts. As long as they can keep making money to donate to the One Fund, he says, it's worth it to keep selling. In fact, they've just come out with a new design to mark one year since the tragedy.