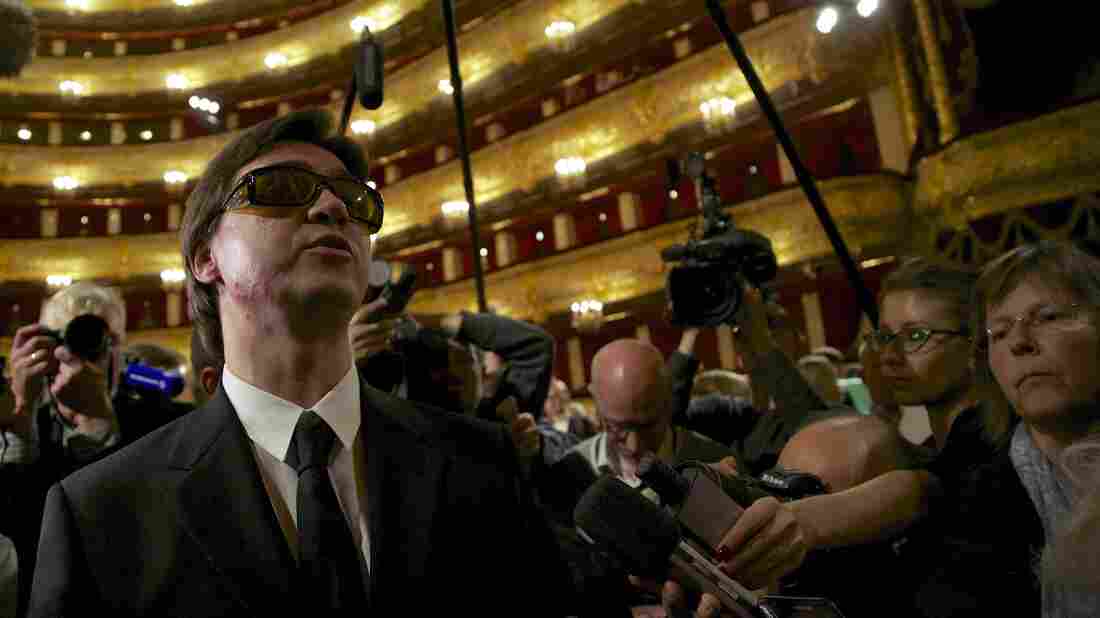 Bolshoi Ballet artistic director Sergei Filin addresses the media during a meeting at the Bolshoi Theater. Filin was nearly blinded last year in an acid attack masterminded by one of the company's dancers. Alexander Zemlianichenko/AP hide caption 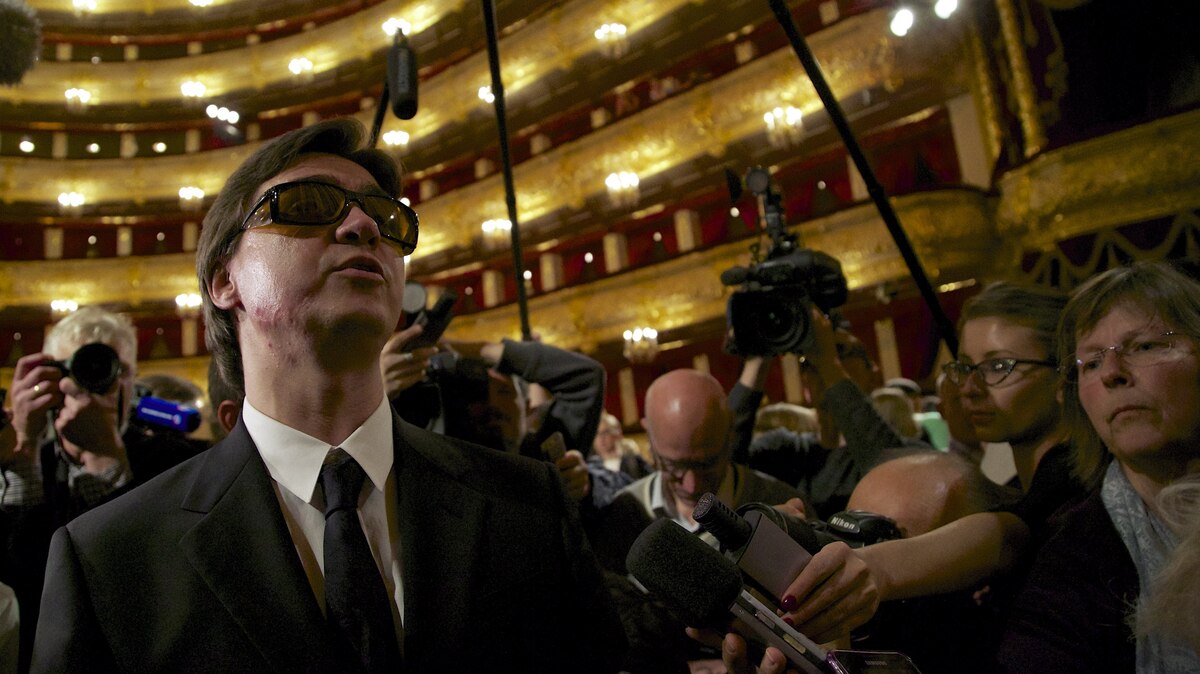 Bolshoi Ballet artistic director Sergei Filin addresses the media during a meeting at the Bolshoi Theater. Filin was nearly blinded last year in an acid attack masterminded by one of the company's dancers.

Relations between Russia and the U.S. are at one of the lowest points since the Cold War. But one man is trying to do what he can to build a bridge between the two countries, despite his own personal tragedy. Sergei Filin, artistic director of the Bolshoi Ballet, is in the U.S. for the first time since an assailant threw acid in his face last year, partially blinding him.

Sergei Filin en pointe, in drag in a production of Alexei Ratmansky's ballet The Bright Stream.

Though in this country he's mostly known for the acid attack, in the dance world Filin is regarded as a brilliant visionary. "He's like, bigger than life, for sure," says former Bolshoi dancer Larissa Saveliev. She was part of the Bolshoi when Filin was one of its star soloists. As a dancer, Filin was athletic and charming, she says. "He has a very beautiful physique, but he was very emotional and a lot of personality." In one of his most memorable performances several years ago, he donned toe shoes to dance en pointe, in drag — a rare feat for a male dancer.

Except for the dark glasses, Filin looks much better now than he did in the video interviews he gave last year, not long after a masked man threw sulfuric acid in his face in front of Filin's Moscow home. Back then, Filin's entire face was covered in bandages. A disgruntled dancer with the Bolshoi — Pavel Dmitrichenko — confessed to hiring a hit man to hurt Filin. He and his accomplices are now in jail.

The story, with its Black Swan and gangster overtones, was a media sensation around the world last year. The Bolshoi had been plagued by scandals — rivalries, financial troubles — well before the attack on Filin, but none involved such violence.

Filin has had 27 surgeries to help restore his eyesight. Today, he says, the vision in his left eye fluctuates around 50 percent. He can only see shadows of objects with his right eye. "In terms of my eyesight, well, it's improving and I have sufficient eyesight to continue what I'm doing," he says with a sigh.

Through a translator, Filin says he's also learning an entirely new way to live. "Before the attack, I was the one who was leading everyone — my family, my friends, people who needed help, and this was my life role at that time," he says. "But following the attack, the situation has reversed, and now these people do everything to allow me to overcome this terrible experience and to go forward in my life."

Despite the scandals, the Bolshoi Ballet is still a source of Russian national pride. With more than 200 dancers, it's one of the biggest companies in the world. Filin was 40 years old when he became artistic director three years ago. He wanted to shake things up in the historic institution. He restaged the classics and brought in contemporary choreographers. He also hired American dancer David Hallberg, the first foreign-born dancer to join the Bolshoi as a principal soloist. Larissa Saveliev says it was a revolutionary move. "The fact Sergei got this idea was already kind of big step forward out of the traditional Russian way. I know he was criticized for this as well because it was something which was never done before," she says.

Filin believes Hallberg won over the critics. "David has become such a great dancer. I can also say David is not only an American dancer. He's also at least half of a Russian ballet dancer," he says.

Ballet might be incredibly competitive, but Filin believes it doesn't have borders. "Ballet is something of a secret weapon which will serve to relax tension and bring people together so that they can observe the beauty, the things which unite us," he says.

When the Bolshoi travels to Washington, D.C., in May, Hallberg will partner with Bolshoi star Svetlana Zakharova in Giselle. The company performs in New York in July.