Accessibility links
'Pay Secrecy' Policies At Work: Often Illegal, And Misunderstood President Obama has signed an order that reinforces part of a law that's existed for nearly 80 years: Employees can discuss compensation without fear of retaliation. Here's what you should know. 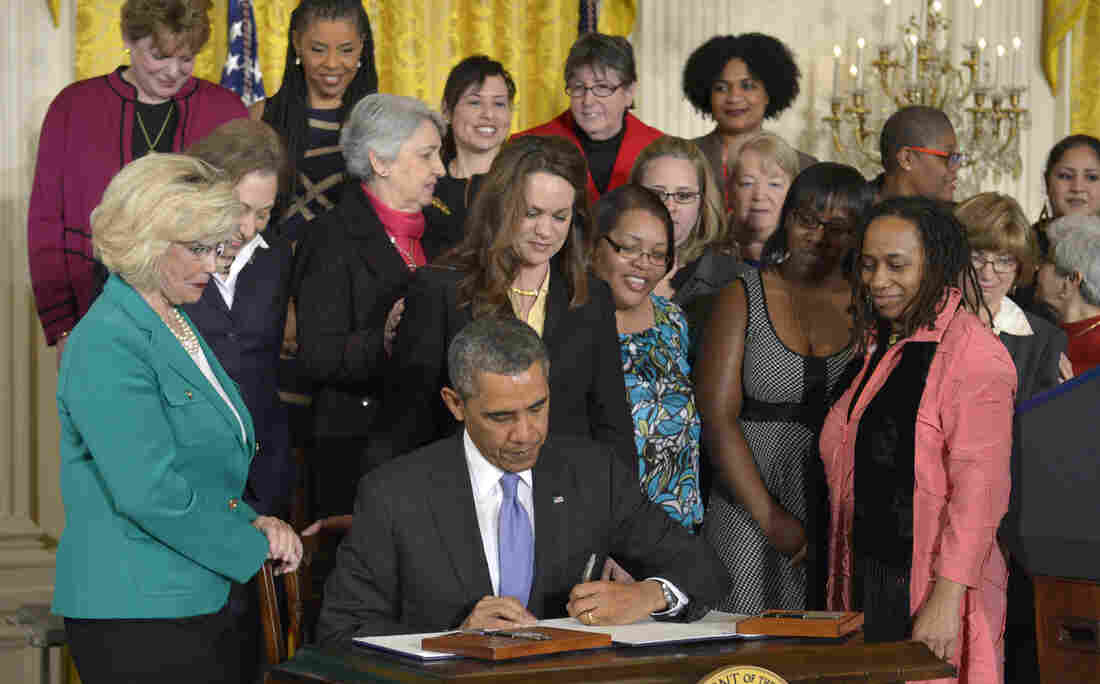 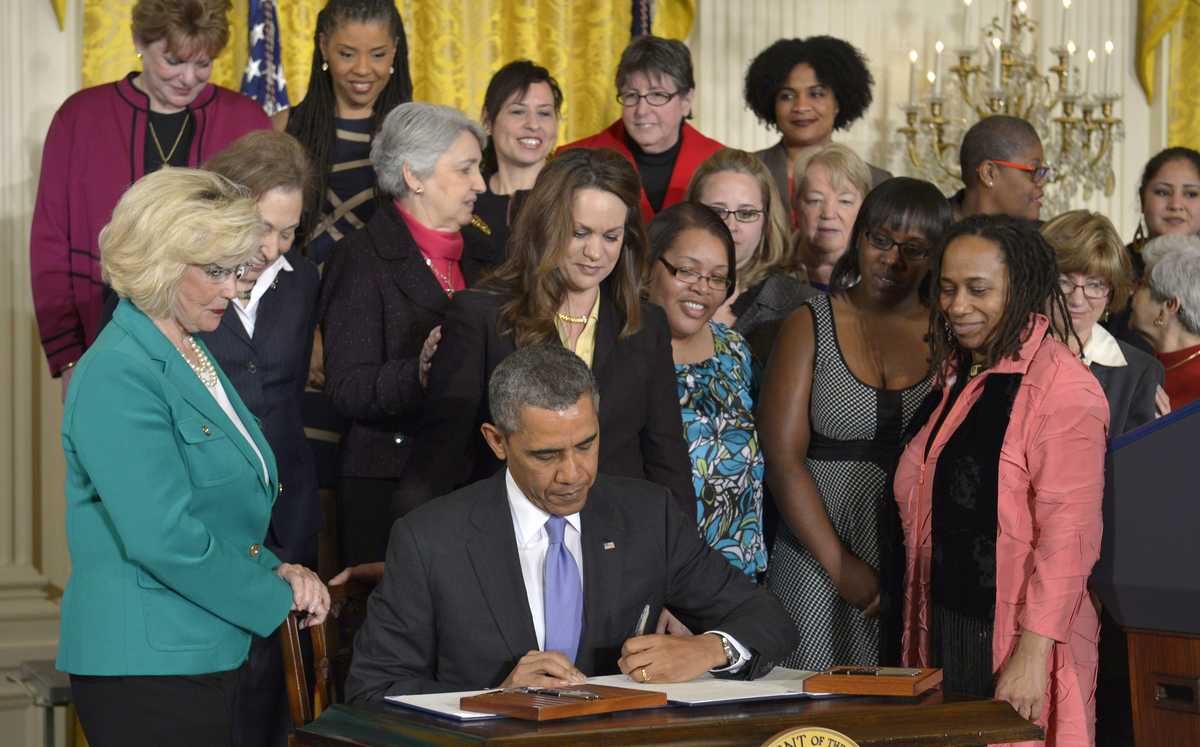 President Obama says his administration is fighting to close the gender wage gap, the gulf between what working men and women earn for the same job.

Last week, Obama moved to circumvent a divided Congress on the issue. He announced two executive actions promoting the idea of "equal pay for equal work," both directed at creating more transparency in the workplace.

For one, the president directed the Department of Labor to collect more information on what federal contractors pay their employees, "so pay discrimination can be spotted more easily."

Obama also signed an executive order prohibiting federal contractors from retaliating against employees who talk about their salaries or other compensation information.

"Pay secrecy fosters discrimination and we should not tolerate it," the president said, "not in federal contracting or anywhere else."

The intention is that if women find out their male co-workers are earning more, they can do something about it.

But here's the thing: Under a nearly 80-year-old federal labor law, employees already can talk about their salaries at work, and employers are generally prohibited from imposing "pay secrecy" policies, whether or not they do business with the federal government.

So why is the president signing an executive order? It's a matter of visibility for labor law and this particular right, says Cynthia Estlund, a law professor at New York University. The law, she says, "is not really well understood." And many don't even know this right exists.

To better understand this complicated topic, here is a breakdown of the basics:

What Is 'Pay Secrecy'?

Pay secrecy is a workplace policy that prohibits employees from discussing how much money they make. These policies are sometimes written down in employee handbooks. In some cases, those policies are implied, and managers simply urge employees not to talk about their salaries. 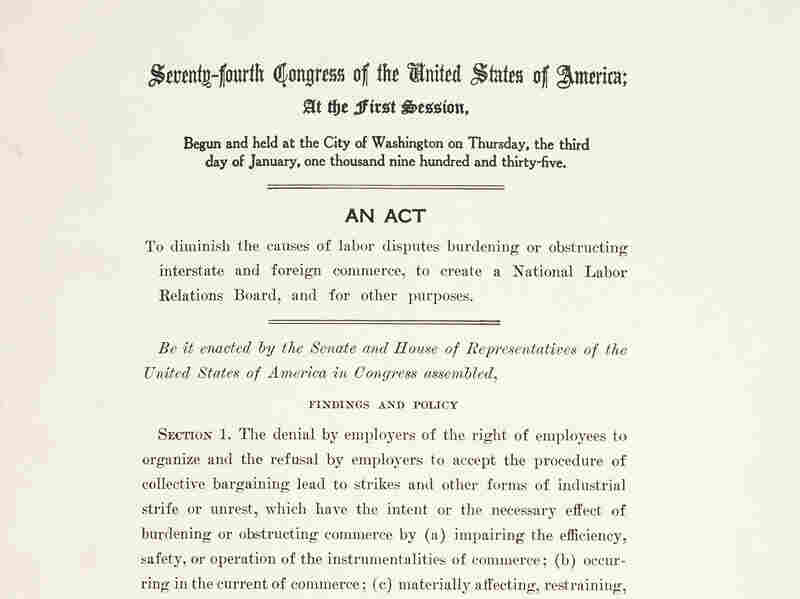 The National Labor Relations Act, also known as the "Wagner Act," became law in 1935. It's the basis for employees' rights to talk about wages with their coworkers. National Archives hide caption 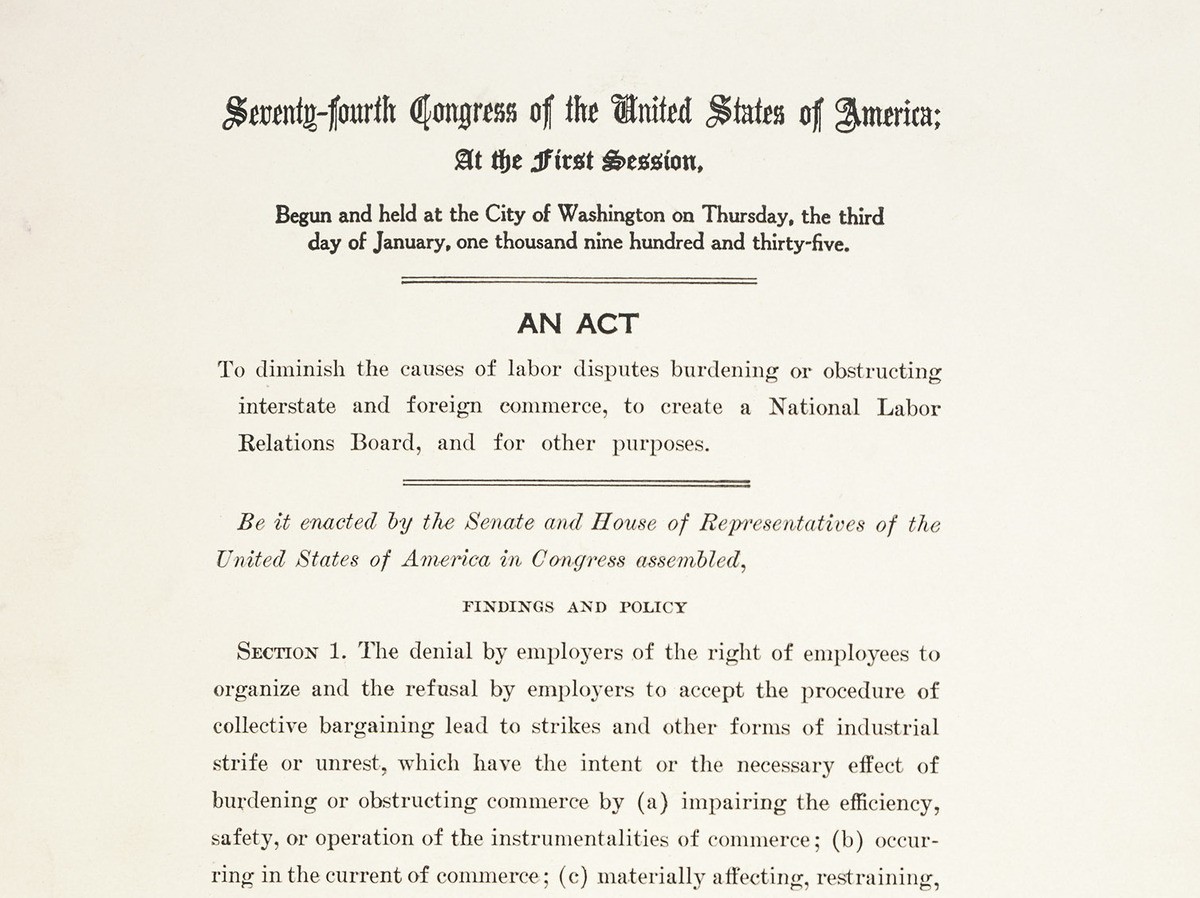 The National Labor Relations Act, also known as the "Wagner Act," became law in 1935. It's the basis for employees' rights to talk about wages with their coworkers.

Under the National Labor Relations Act, enacted in 1935, private-sector employees have the right to engage in "concerted activities for the purpose of collective bargaining or other mutual aid or protection."

The language is somewhat antiquated, but according to Estlund, "it means that you and your co-workers get to talk together about things that matter to you at work."

Even if an employee signs a nondisclosure agreement with an employer, Estlund says, the employee would still be protected when talking about salary.

"You can't just declare information about people's pay to be confidential information that can't be discussed," she says.

What Happens To Employers That Violate The Law?

Employers caught violating the law have to offer certain "remedies," which, according to Estlund, are typically "not very serious."

"It doesn't cost very much to violate the NLRA in most cases," Estlund says, "and so employers aren't so afraid of violating it." But the National Labor Relations Board can order employers to provide back pay to wrongfully terminated employees and to offer former employees their old jobs back.

The president's executive order provides a penalty that goes beyond the labor board's punishments. Companies that do work for the federal government and retaliate against employees for talking about pay could now lose a federal contact, and a lot of money.

"Even a very remote threat that you'll lose your federal contract is a very big worry," Estlund says.

5 Takeaways From The Equal Pay Debate

The Politics Of Equal Pay: It's More Than A Women's Issue

How Common Are These Policies At Workplaces?

There are a couple different estimates of how many companies have policies on pay secrecy — whether on the books or merely implied.

A 2011 survey from the Institute for Women's Policy Research found that about half of workers "report that the discussion of wage and salary information is either discouraged or prohibited and/or could lead to punishment."

A survey of private-sector employers from 2001 found that more than one-third had specific policies that banned workers from talking about their compensation with their co-workers.

Are There Limitations To The Law?

For one, the law has a limited definition of "employee." For example, supervisors do not qualify as employees, nor do people who work as independent contractors or agricultural laborers.

And not all employers are subject to the National Labor Relations Act (NLRA). Here's what the labor board's website says on the issue:

"The NLRA applies to most private sector employers, including manufacturers, retailers, private universities and health care facilities. The NLRA does not apply to federal, state, or local governments; employers who employ only agricultural workers; and employers subject to the Railway Labor Act (interstate railroads and airlines)."

There are other exceptions: People who work in Human Resources and have access to a company's payroll could be prohibited from sharing other employees' private salary information.

Estlund also says that the law doesn't protect "mere griping" about pay, which would not rise to the level of "concerted activity" as outlined by the law.

What About Non-Unionized Employees? Are They Protected?

According to the NLRB, "employees who are not represented by a union also have rights under the [National Labor Relations Act]."

What Can I Do If My Employer Fires Me For Talking About Pay?

You can contact a regional office of the National Labor Relations Board and file a complaint. The NLRB may investigate and initiate a case against your employer.

In February 2013, for example, Lyn Teare won a case against her former employer, a civil engineering company, which had fired her two years earlier. The NLRB found that the employer had improperly fired Teare for discussing salary issues, and she received two years' worth of back pay, plus the option of getting her job back. (She did not take the job offer.)

Like so many employees, Teare says she did not know about the law on pay secrecy at the time of her dismissal.

"The funniest part," she says, was that her bosses "didn't even know about the law themselves."