Accessibility links
Statue Of A Homeless Jesus Startles A Wealthy Community The bronze sculpture depicting Jesus huddled under a blanket on a park bench has provoked praise and complaints — and a call to the police — in its new North Carolina neighborhood. 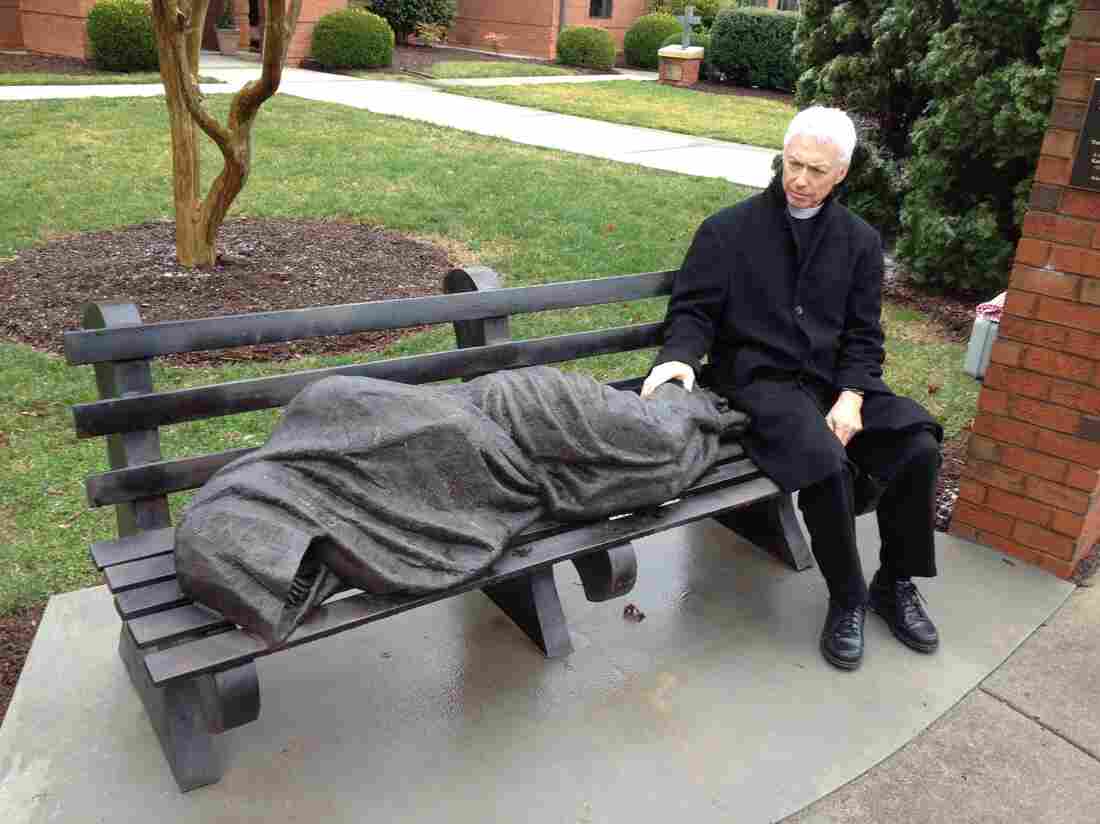 The Rev. David Buck sits next to the Jesus the Homeless statue that was installed in front of his church, St. Alban's Episcopal, in Davidson, N.C. John Burnett/NPR hide caption 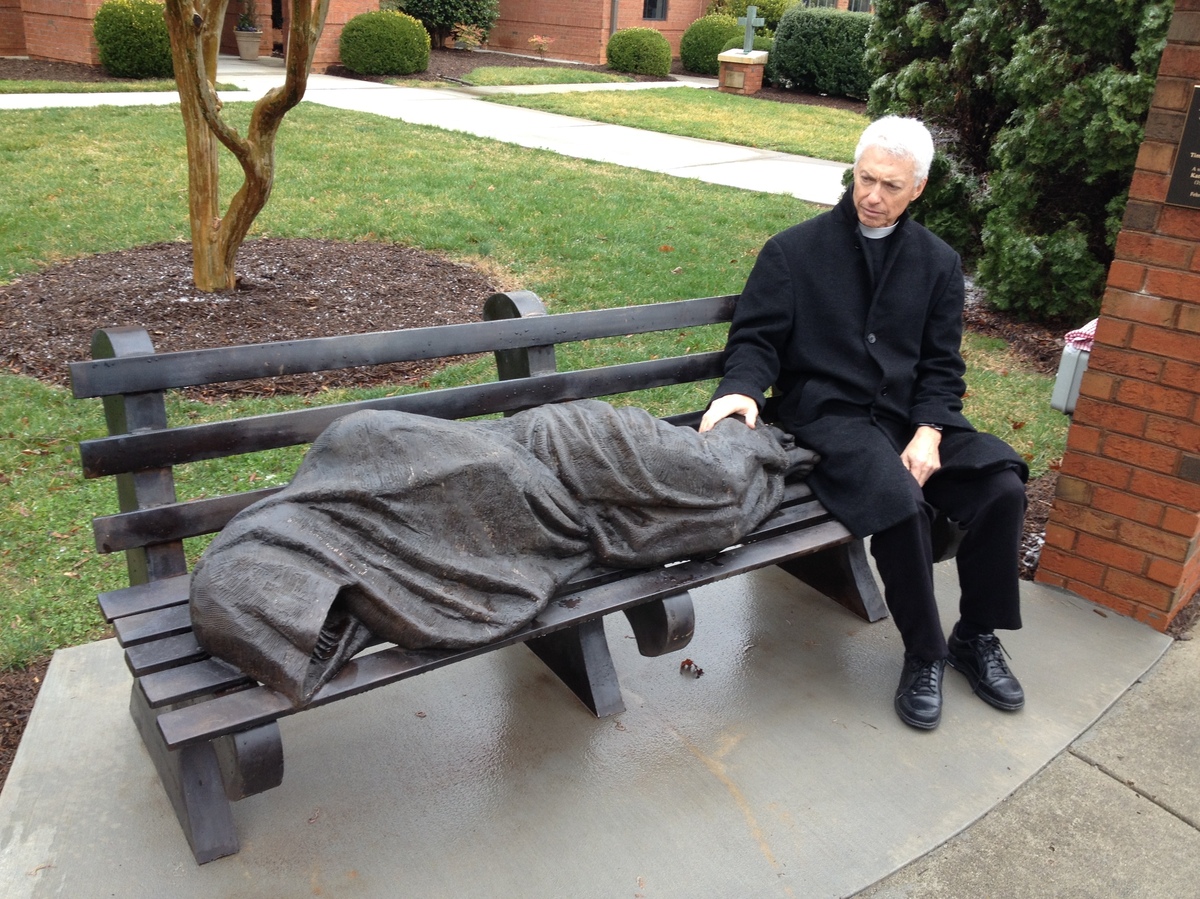 The Rev. David Buck sits next to the Jesus the Homeless statue that was installed in front of his church, St. Alban's Episcopal, in Davidson, N.C.

A new religious statue in the town of Davidson, N.C., is unlike anything you might see in church.

The statue depicts Jesus as a vagrant sleeping on a park bench. St. Alban's Episcopal Church installed the homeless Jesus statue on its property in the middle of an upscale neighborhood filled with well-kept townhomes.

Jesus is huddled under a blanket with his face and hands obscured; only the crucifixion wounds on his uncovered feet give him away.

The reaction was immediate. Some loved it; some didn't.

"One woman from the neighborhood actually called police the first time she drove by," says David Boraks, editor of DavidsonNews.net. "She thought it was an actual homeless person."

That's right. Somebody called the cops on Jesus.

"Another neighbor, who lives a couple of doors down from the church, wrote us a letter to the editor saying it creeps him out," Boraks added.

Some neighbors feel that it's an insulting depiction of the son of God, and that what appears to be a hobo curled up on a bench demeans the neighborhood.

The bronze statue was purchased for $22,000 as a memorial for a parishioner, Kate McIntyre, who loved public art. The rector of this liberal, inclusive church is the Rev. David Buck, a 65-year-old Baptist-turned-Episcopalian who seems not at all averse to the controversy, the double takes and the discussion the statue has provoked.

"It gives authenticity to our church," he says. "This is a relatively affluent church, to be honest, and we need to be reminded ourselves that our faith expresses itself in active concern for the marginalized of society."

The sculpture is intended as a visual translation of the passage in the Book of Matthew, in which Jesus tells his disciples, "As you did it to one of the least of my brothers, you did it to me." Moreover, Buck says, it's a good Bible lesson for those used to seeing Jesus depicted in traditional religious art as the Christ of glory, enthroned in finery.

"We believe that that's the kind of life Jesus had," Buck says. "He was, in essence, a homeless person."

This lakeside college town north of Charlotte has the first Jesus the Homeless statue on display in the United States. Catholic Charities of Chicago plans to install its statue when the weather warms up. The Archdiocese of Washington, D.C., is said to be interested in one, too.

The creator is a Canadian sculptor and devout Catholic named Timothy Schmalz. From his studio in Ontario, Schmalz says he understands that his Jesus the Homeless is provocative.

"That's essentially what the sculpture is there to do," he says. "It's meant to challenge people."

A spokesman at St. Michael's says appreciation of the statue "was not unanimous," and the church was being restored, so a new work of art was out of the question. That statue found a home in front of the Jesuit School of Theology at the University of Toronto.

A spokesperson at St. Patrick's in New York says they liked the homeless Jesus, but their cathedral is also being renovated and they had to turn it down.

The most high-profile installation of the bronze Jesus on a park bench will be on the Via della Conciliazione, the avenue leading to St. Peter's Basilica — if the city of Rome approves it. Schmalz traveled to the Vatican last November to present a miniature to the pope himself.

"He walked over to the sculpture, and it was just chilling because he touched the knee of the Jesus the Homeless sculpture, and closed his eyes and prayed," Schmalz says. "It was like, that's what he's doing throughout the whole world: Pope Francis is reaching out to the marginalized."

Back at St. Alban's in Davidson, the rector reports that the Jesus the Homeless statue has earned more followers than detractors. It is now common, he says, to see people come, sit on the bench, rest their hand on the bronze feet and pray.