Accessibility links
Boston Finds That Quality Preschool Is Worth The Effort Policymakers are weighing the costs and benefits of universal preschool, trying to determine what works in the classroom. One of the places they're looking is Boston. 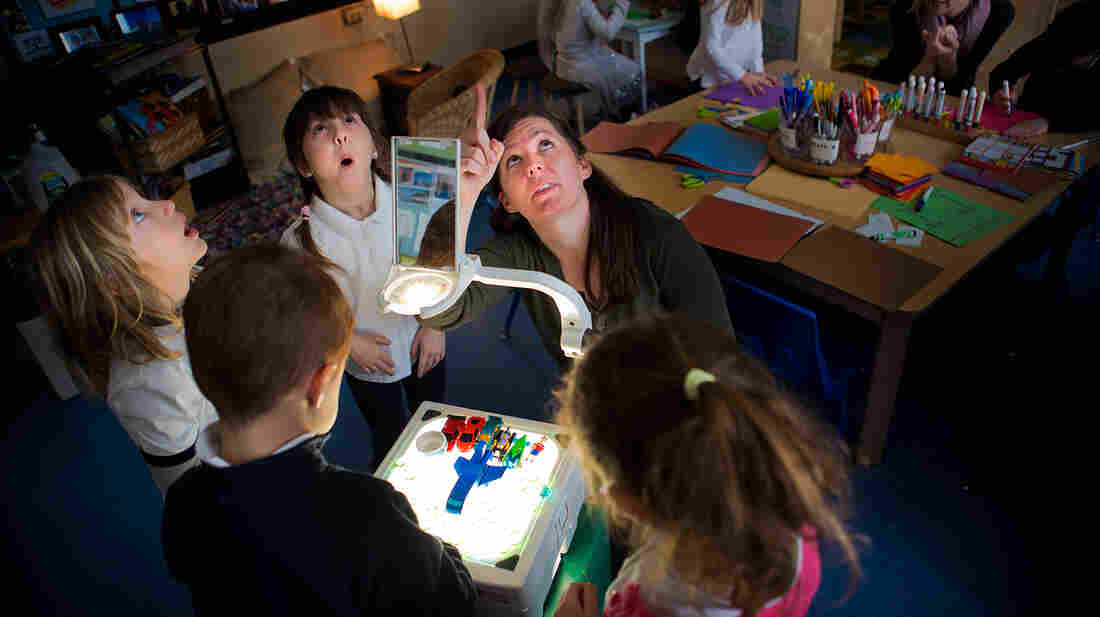 Using a projector, Jodi Doyle points out shadows on the ceiling to students in her preschool class at the Eliot School in Boston. Boston has become a beacon for the universal preschool movement, but so far it can only provide seats for about half the interested families. Jesse Costa/WBUR hide caption 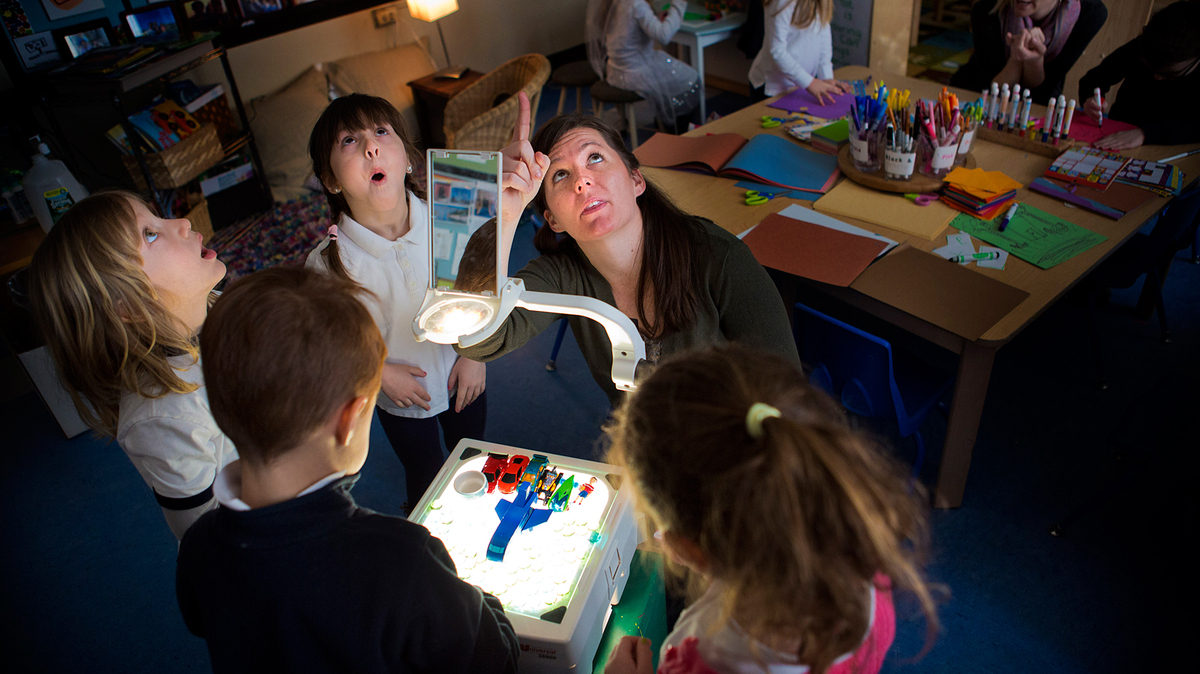 Using a projector, Jodi Doyle points out shadows on the ceiling to students in her preschool class at the Eliot School in Boston. Boston has become a beacon for the universal preschool movement, but so far it can only provide seats for about half the interested families.

It's a Wednesday morning at the Eliot K-8 Innovation School. Teacher Jodi Doyle is working with a small group of preschool students interested in domes.

"What do you think the difference is between a dome and an arch?" she asks.

The lesson doesn't go exactly as planned. Doyle wants the kids to build their domes with wire, but she wants the children to come up with that idea themselves. The kids used wire several months ago for a related project, and she hopes they'll remember.

"Is there anything else in this classroom we could use that might hold the shape of a dome?" she asks.

Preschool is getting a lot of attention these days. President Obama and mayors across the country are touting preschool as an important investment in the economy.

As policymakers weigh the costs and benefits of "preschool for all," they're trying to figure out what actually works in the classroom.

One of the places they're looking is Boston.

Teaching coach Marina Boni is watching Doyle's classroom closely. After the lesson, she commends Doyle for trying to tie the new wire project to the old, but she says photographs of the older, forgotten project might've made the connection a bit more concrete.

School officials say this system of intensive coaching is a key to classroom success. Boston uses coaches as part of its larger push for preschool quality. The district has installed a rigorous curriculum and requires teachers to get masters degrees.

Academics have known for some time that quality matters, but much of the research has focused on small-scale programs. The Boston program is different.

"That you can develop high quality across 68 schools was not obvious," says Harvard economist and education professor Richard Murnane, who was not involved in the study. "We can do better in preparing poor children for school, and it can be done at considerable scale."

But not everyone is sold. Some preschool research shows academic gains fading by third grade. Critics say a program without staying power is hardly worth a big public investment.

Russ Whitehurst, an education analyst with the Brookings Institution, says the research out of Boston does little to puncture that critique, because it only measured gains over the course of a single preschool year.

"So we just don't know about Boston, whether the positive effects that are talked about at the end of the pre-K year are going to be there at the end of first grade, second grade or third grade," Whitehurst says. "Without knowing that, it's hard to make a decision about whether this is a great program that ought to be replicated in other places."

But policymakers around the country aren't waiting for a long-term study. They're coming to Boston to see the preschool program up close.

Recently, a high-level delegation from Seattle, including the mayor, school board members, a representative from the Bill and Melinda Gates Foundation and City Council President Tim Burgess, toured the Boston system.

"They've done an amazing job here," Burgess said. "We want to replicate that in Seattle."

Still, if there was enthusiasm on the bus, there was also a bit of pushback.

School board member Stephan Blanford likes the idea of comprehensive preschool, but says he has some serious questions about financing a high-quality program and finding enough classroom space.

"The school district is actually growing, our enrollments are growing, and the issue around capacity is going to be huge," Blanford said.

Space and money are not just problems in Seattle; they're problems in many American cities — including Boston. So far, Boston's only managed to provide preschool seats for about half the interested families.