Accessibility links
'Say Anything' At 25: Nothing Bought, Sold Or Processed Cameron Crowe's much-loved film turns 25 this week, and unlike a lot of high-school films of its day, it's aged surprisingly well. 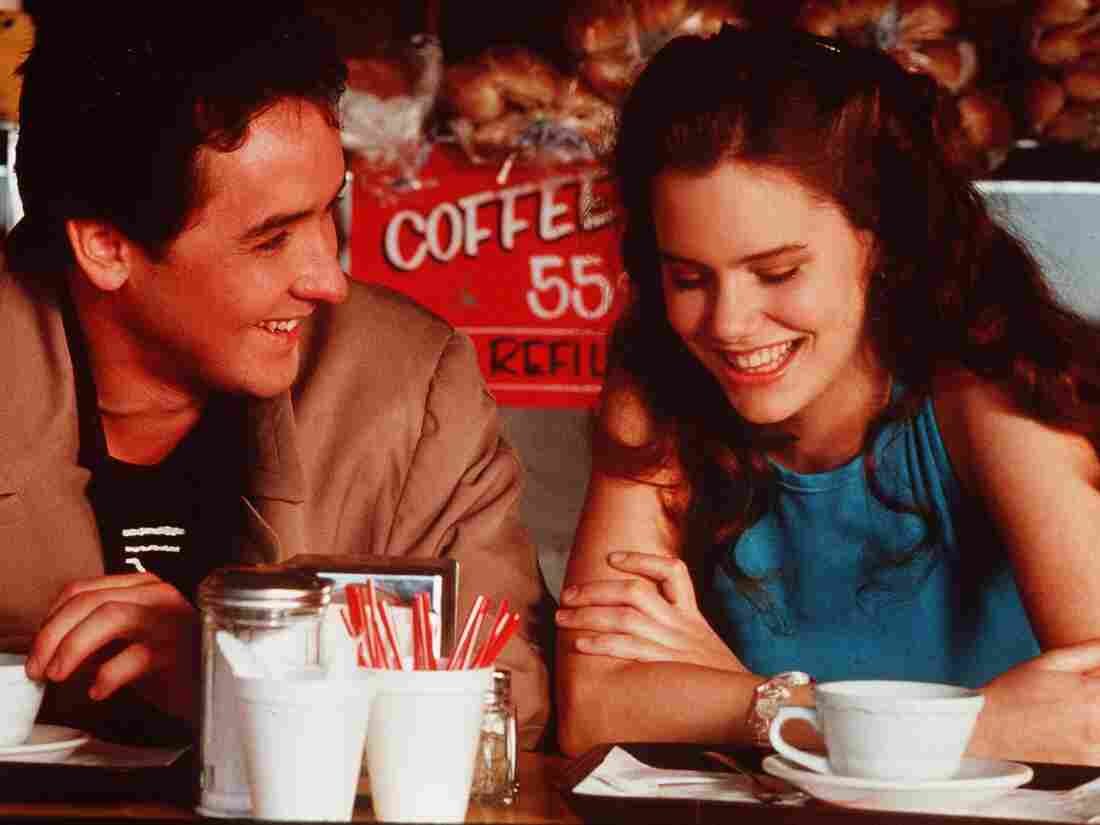 John Cusack and Ione Skye in Say Anything. The Kobal Collection hide caption 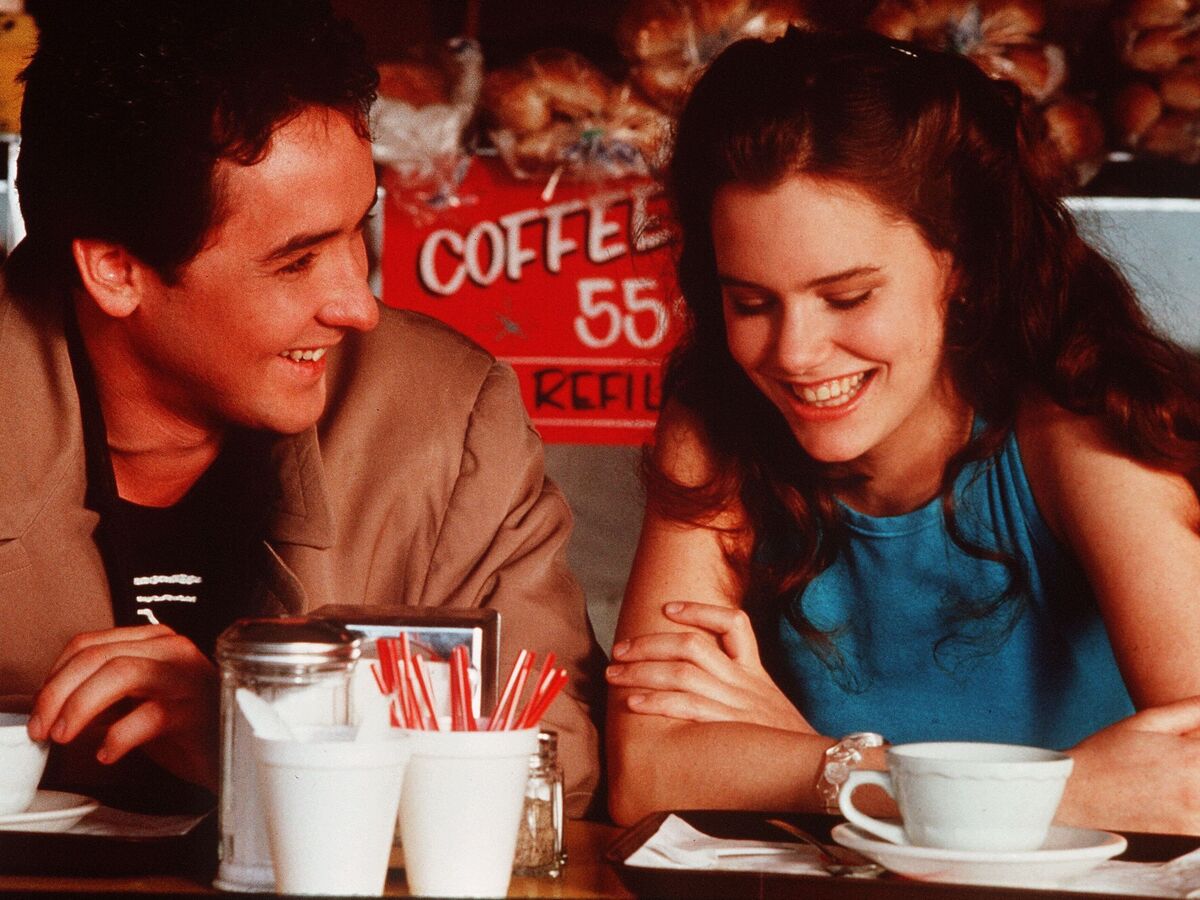 John Cusack and Ione Skye in Say Anything.

"I don't feel anything."

Those are, surprisingly enough, the first words of the deeply felt Say Anything, which turns 25 years old on Monday. It opened April 14, 1989, and that weekend, it made $5.2 million. It wasn't enough to come anywhere close to what Major League pulled down in its second week ($9.1 million), but it was enough to come in one slot ahead of the opening weekend of the Tony Danza comedy She's Out of Control ($4.6 million).

John Cusack, four years past playing a college freshman in The Sure Thing, plays graduating high school senior Lloyd Dobler. Ione Skye, three years after her debut in the very dark drama River's Edge, plays the brilliant and shy Diane Court. And John Mahoney, four years before he found sitcom immortality as Frasier Crane's father Martin, plays Diane's adoring and deeply flawed father, Jim. Writer and first-time director Cameron Crowe was best-known at the time for the screenplay for Fast Times at Ridgemont High — which is fondly remembered now as the launching pad for many respectable careers, but which Roger Ebert had called "a failure of taste, tone and nerve."

At the center of Say Anything is Crowe's deep empathy for the uncertainty and ambivalence, bordering on existential terror, that the end of high school naturally brings to a lot of kids. Even for someone like Diane, whose future looks as bright as she and her father have meticulously planned it to be, there are small problems — what happens when you win a prestigious opportunity to study abroad and you're afraid to fly? — and big problems — why are men from the IRS at the door to talk to your dad?

And of course, there is Lloyd, perhaps the single most human 19-year-old that the films of the '80s and '90s gave to us. He lives with his sister and her son, he's interested in kickboxing maybe, he's full of nascent theories about how life works, and he's knee-bouncingly, jitter-havingly excited about how smart and thoughtful and serious Diane is.

All around them, there's doubt. It's Lloyd's best friend Corey who opens the film by saying she feels nothing as they prepare for graduation. She and Lloyd and their friend D.C. — also a girl; Lloyd seems suspicious of guys his own age — are sitting around passing the time as Lloyd talks himself into calling Diane. When Corey warns him he'll get hurt, he pauses, then declares, like a battle cry, "I want to get hurt!"

This is what makes Lloyd wonderful, the best of Crowe's rash, restless dreamers: He has all that doubt, but no fear. He knows what could happen, what almost has to happen; he charges ahead anyway. He's not naïve. He's simply determined in the arena of happiness and love the way other movie heroes are determined in the arenas of sports and competition. He wants to be a real person, and tells a dinner party worth of people that the only thing he knows for sure is that he doesn't want to buy anything, sell anything or process anything.

He's pure enthusiasm: Even leaving a message for Diane with her father, he can't keep from blurting out, "She's really pretty great, isn't she?"

And when he gets her on the phone, she doesn't remember him, so he says, "So, it's Lloyd, and ... let's go out." And she laughs in surprise — to herself, because laughing at him would be mean — and it's fun, and she's been feeling like she never got to know anyone in high school, so they're off. Movies so often insist upon chance meetings and high-concept setups that part of what makes it such a lovely story is that it begins not with a chance collision, but with gentle, respectful, simple courting: "Let's go out." It begins with this kid wrapping this girl up in his transparent, egoless fondness for her to the point where she feels ... not won, but won over.

While there are other characters, it's really a three-person piece, and we're allowed into everyone's head. We do follow Lloyd and Diane through their romance, but we're also in the car with Jim when he sings "Rikki Don't Lose That Number," buoyant at learning Diane won a fellowship. There's never any sense that Jim's love for her is anything other than (in his mind) selfless and genuine; he doesn't push her so he can brag about her or for his own status or satisfaction. He genuinely adores and understands her, in a way her mother — seen briefly during an uncomfortable lunch — clearly doesn't.

He's also a thief. And he treasures being paired with her, to the point where he's jealous of anything that comes into her life, including a boyfriend. He's terribly manipulative, but not on purpose. People are complicated.

The movie is filled with little stories it barely touches: the absence of Lloyd's parents because his father is stationed in Germany, the way his sister takes her anger at her son's father out on Lloyd, and especially the way that Corey, who is going to be a marvelous adult eventually, is tying herself into knots over her on-and-off-boyfriend Joe, who, when we see him, is ... nothing. (The balance between tragedy and comedy in Lili Taylor's performance of all of the songs Corey has written about Joe will make you want to hug her and peel your own skin off.) Care is given to everything — how many films boast a thoughtful, nuanced scene between a young woman and an IRS investigator?

Lloyd really is a very different kind of boyfriend ideal. There's no stoicism, no angst, no withholding. What Diane learns about him on their first date is that he's a good guy — that he's decent, that he's patient, that he's funny, that he can make stupid situations entertaining, that he looks out for broken glass she might step on. They don't hate each other at first or bicker; they only fight after they love each other a lot.

When Say Anything came along, the reign of John Hughes in making films that spoke to teenagers had ended; he'd moved on to Planes, Trains & Automobiles and She's Having a Baby, and the next year he'd write the screenplay of Home Alone. Here, the Hughes fantasy that someone unattainable — rich, popular, beautiful, athletic, rebellious — might notice you is replaced with a different ideal: that a very, very good person might fall in love with you.

It was post-Porky's and pre-Superbad, a time when high school sex comedies had temporarily receded, and here was this charming, contemplative, often very funny but also emotionally unsparing story about love. When I saw it in 1989, I was 18, and I'm sure that the most romantic thing in it appeared to be the iconic boom box over the head. I'm sure of it.

But now, watching it 25 years later, the most romantic scene is the last one, when Lloyd is delivering a letter from Diane to her father, and he keeps talking about the multiple versions, as both men learn together which one she decided to send. What's most resonant is learning from that scene that Lloyd and Diane didn't just date and they didn't just kiss and they didn't just make grand gestures. They sat together and talked about these enormously difficult things she was dealing with, and he read every letter she wrote, and they talked about what she should say, and he probably urged her to be kind to her dad, and she listened. And none of that is on screen, but all of it is, you know?

Say Anything always seems to be about very big things, but it tends to shrink them down to very little things, because ultimately, they're just ... kids. Lloyd doesn't have any tricks. When a guy asks him how he got Diane to go out with him, he tells the guy, who seems a little disappointed, that he just asked her out. The guy is unsatisfied: "How come it worked? What are you?"