Accessibility links
After Losing A Leg, Woman Walks On Her Own — In 4-Inch Heels A year after the Boston Marathon bombing, Heather Abbott has adapted to life with her prostheses, including a blade for running and one that allows her to wear her favorite shoes. 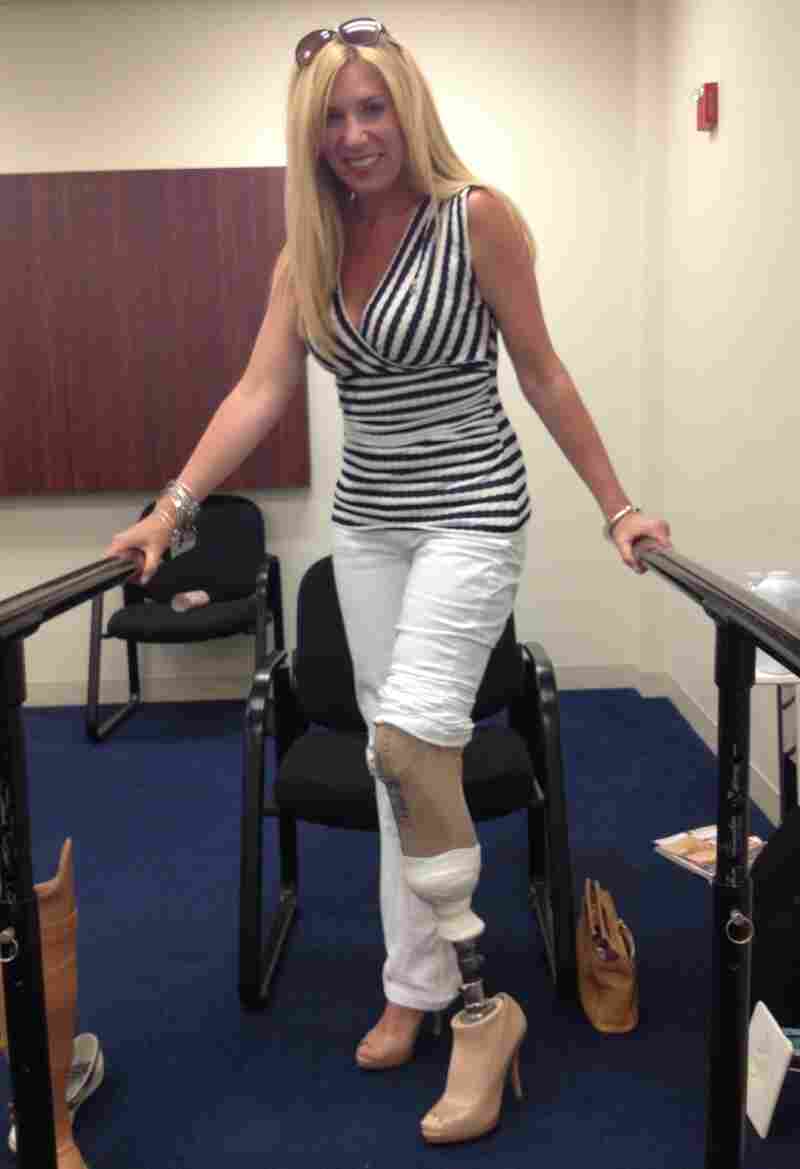 Heather Abbott tests out a high-heeled prosthetic to see if she can walk in heels. "No problem!" she says. Courtesy of Heather Abbott hide caption 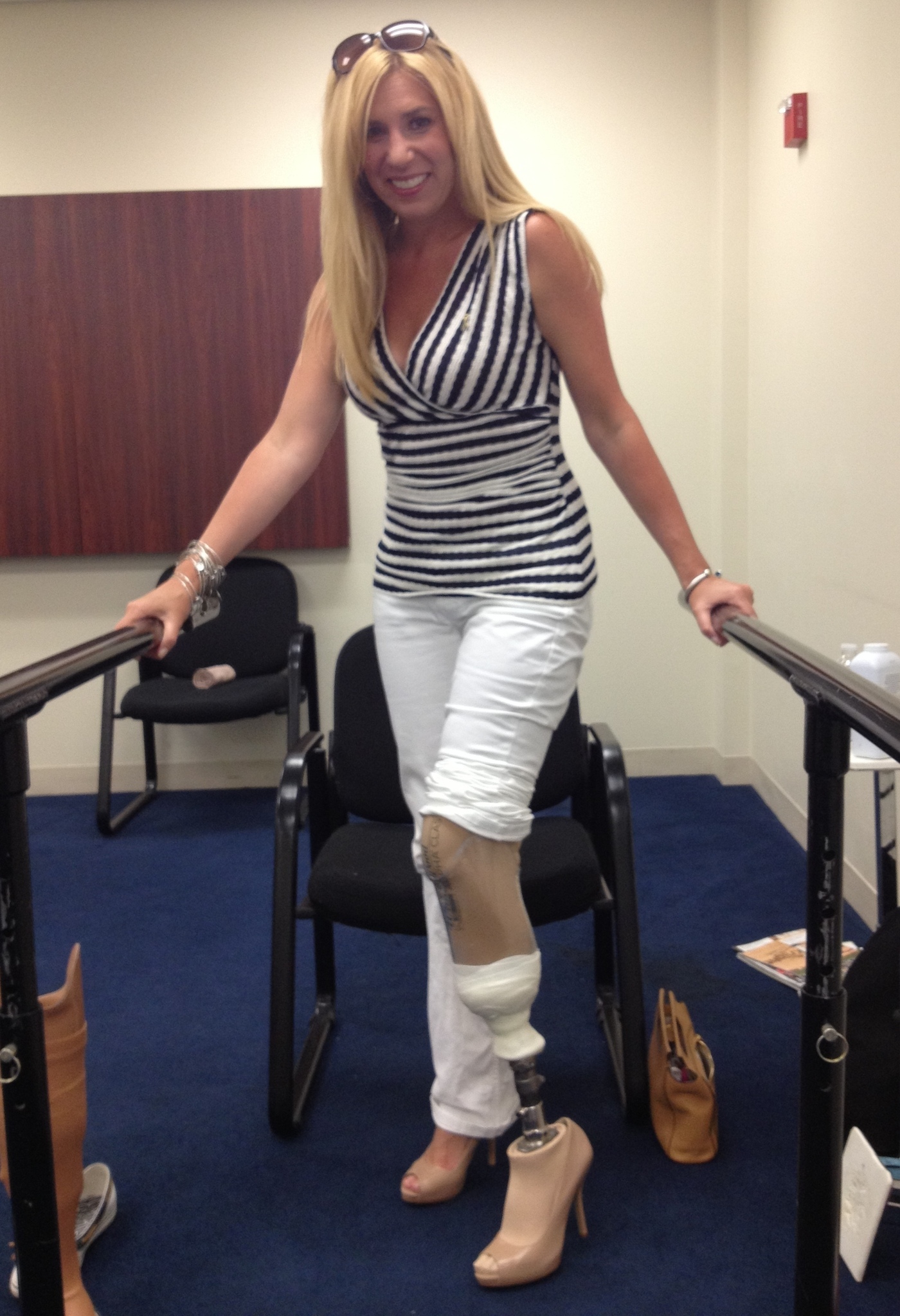 Heather Abbott tests out a high-heeled prosthetic to see if she can walk in heels. "No problem!" she says.

Returning to watch the Boston Marathon was never a question for Heather Abbott. After losing her leg in the bombing last year, watching the race is just one item on a long list of things she did before and intends to do again. Also on that list: wearing 4-inch heels.

"Sometimes, I think: Why am I doing this to myself? Because I could just wear regular flat shoes," Abbott says. "I don't want to give things up that I love to do, so I'm going to get used to it and figure it out."

As Abbott walks around her bright apartment in Newport, R.I., decked out in skinny jeans and a favorite pair of nude-colored stilettos on a special high-heeled prosthesis — with custom-matched skin color and painted toenails — it's hard to tell which foot is which.

She's come a long way since last summer when she struggled to take her first steps in her first prosthesis, a bulky black-metal contraption.

"It felt like I was walking on a stilt," Abbott says. Her leg was still so swollen and raw that every step hurt.

"That would be one of my not-better moments," Abbott says. "This was going to be the first step, literally, in getting my life back, and it was so much harder than I expected it to be."

It was hard not to despair. "This is what I have to walk the rest of my life?" Abbott wondered. "How am I gonna do this?" With time, her wound grew less painful, and Abbott found her stride.

She has had her share of lows — like the day the doorbell rang and she jumped out of bed, forgetting about her foot, and slammed to the floor.

She has also hit unimaginable highs, such as the day she defiantly made her way on one foot and crutches, before she had a prosthesis, onto the mound at Fenway Park to throw out the first pitch. Her friends cheered from the sidelines with "Heather Strong" T-shirts and banners.

That was just hours after Abbott was released from the hospital and about a month after marathon day, when she'd taken her annual trip with friends to watch the race from the finish line.

That day, she was about to enter the Forum Restaurant when the second bomb exploded just a few feet from her. Abbott was blown through the door. Her foot felt like it was on fire, and she couldn't get up.

"So many people were running by, and I was stuck there," Abbott says. "People were literally running for their lives, and I was afraid that nobody would stop." 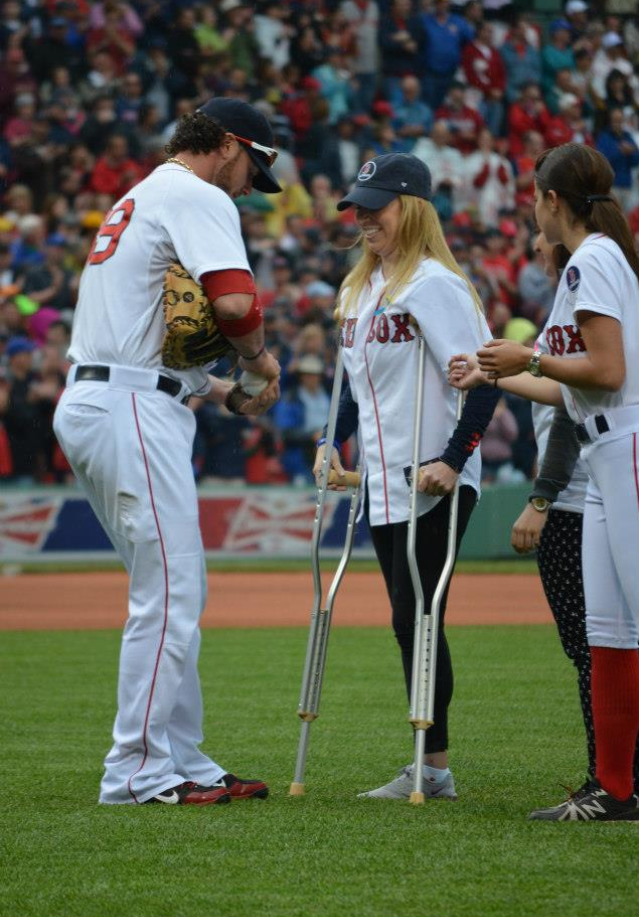 Last year, Abbott threw out the first pitch at Fenway Park as her friends cheered from the sidelines. Courtesy of Heather Abbott hide caption

People did stop, cinching a belt around her leg to stop the bleeding, dragging and then carrying Abbott to an ambulance.

The next few days were a blur, from waking up to news that her foot would never again function or stop hurting, to first lady Michelle Obama showing up in her hospital room just as Abbott was deciding whether to allow doctors to amputate her foot. That was a choice, Abbott says, that was not really much of a choice at all.

"The life that was described to me, with keeping my leg, was not one I wanted," she explains. "I would be in chronic pain, and I was going to be pretty much wheelchair-bound."

Still, the decision kept her up at night in tears. Tending to look at a glass as half-full, Abbott says making that decision herself rather than just waking up to find it done to her gave her a small sense of control when she felt anything but.

"You can't help but have moments sometimes when you say, 'Why did this have to happen?' and 'Why do things have to be so hard now?' " Abbott says. "I can't change it. So I have to try to do the best with the situation that I have now."

To that end, Abbott has filled her days with speaking engagements, talking about her recovery to students, caregivers and college graduates. She believes her story of resilience and the strategies that helped her can apply to anyone.

Tentative at first, she is now poised and upbeat at the podium. She tells audiences about her assortment of prostheses: her high-heeled favorite, her improved flat-footed leg, a donated waterproof leg that allows her to paddleboard, and a blade leg that she runs on.

"Right now I have six legs," Abbott joked to a room full of pharmacology students at a recent event.

Abbott says she has been buoyed by the kindness of strangers from around the world as well as from fellow survivors, whom she avoided for the first month or so, even though they were all in the same hospital.

"I wasn't ready yet to deal with anybody else. I was just absorbing the fact that this had happened to me," Abbott says. "Then I realized I needed to be with them. They were the only people on this planet who understand exactly what I'm going through."

Now, Abbott says, they meet up often for dinners or at physical therapy, and they've even started their own yoga group, where no one has to feel uncomfortable about wearing, or not wearing, a prosthesis.

Abbott says she has also drawn strength from the many other amputees who came to visit her in the hospital, mostly male veterans who were wounded in combat. She says she was especially uplifted by the one female amputee who came: Aviva Drescher, of the reality TV show Real Housewives of New York City.

"It was a really big deal for me when Aviva walked in with high heels," Abbott says. "I had a lot of questions about what I was going to look like and what I'd be able to wear, but I never would ask a room full of war heroes."

Drescher reassured Abbott she would once again wear skirts and heels, and would even go dancing.