Accessibility links
Interview: Ramachandra Guha, Author Of 'Gandhi Before India' The racism Gandhi encountered in South Africa helped spark a lifetime of activism. Historian Ramachandra Guha says without that experience, "he would never have become a political animal." 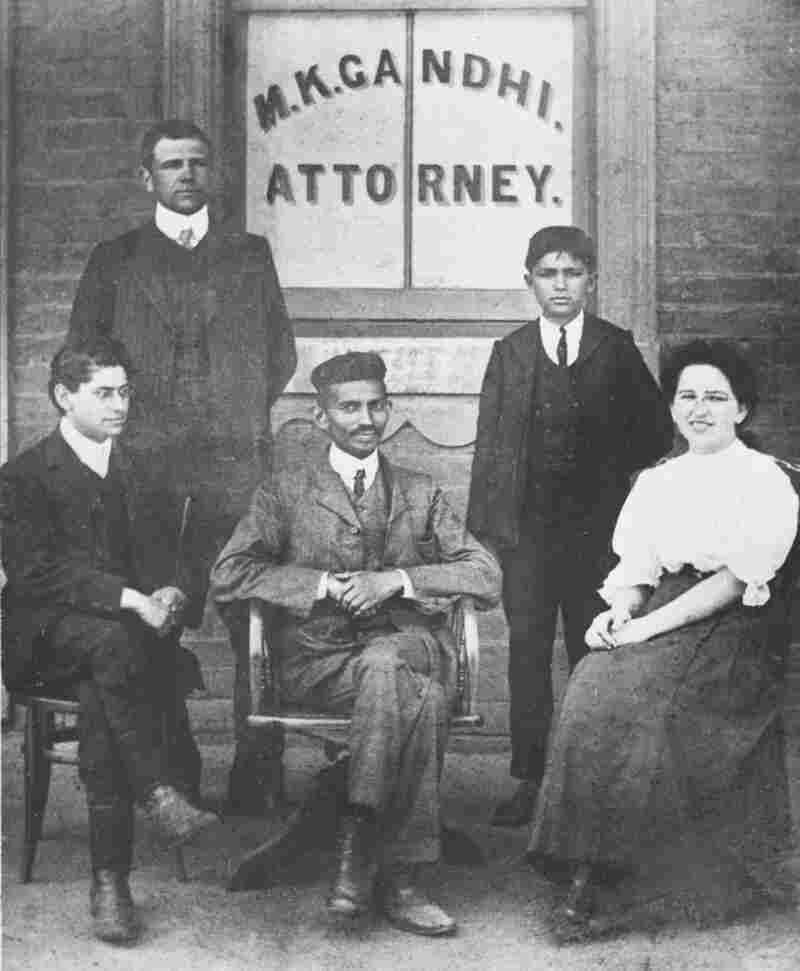 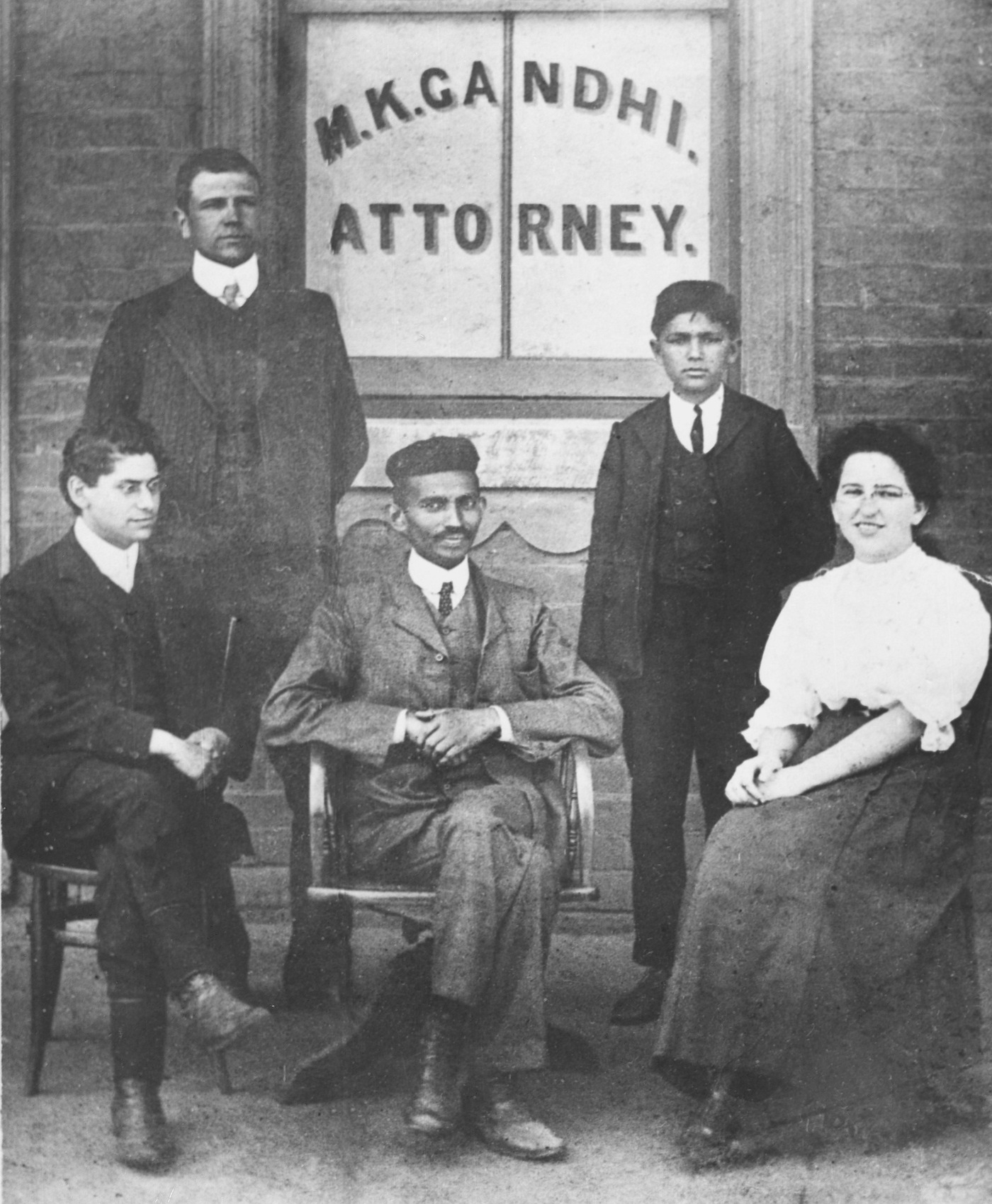 Mohandas Gandhi (center) sits with co-workers at his Johannesburg law office in 1902.

In 1893, in the bustling seaside city of Durban, South Africa — then under British colonial rule — a young lawyer stepped off a ship from India, eager to try his professional luck far away from home. His name was Mohandas Gandhi, and he stayed in that country for more than 20 years before returning home, where he'd make a name for himself as an anti-colonial agitator and social reformer.

On why Gandhi went to South Africa

He goes to make his life and fortune in Africa partly because he failed as a lawyer in India not once, but twice. People think that such a successful politician must have found success very early on, but he actually failed miserably to establish himself in the High Court in Bombay. And, arguably, he was saved from professional failure and historical oblivion by an invitation from an Indian merchant in South Africa to help him solve a legal dispute. It was really an accident.

On one of Gandhi's first encounters with racism in South Africa

He had a first-class [train] ticket, and he got into the first-class compartment and the ticket inspector said, "This is for whites only," and he protested. He had just come from England, where — at least in London in the 1890s — professionals who were colored did not face discrimination. So he protested but to no avail, and he was thrown out. Clearly, he was humiliated; he was badly treated. It was a racially divided society. And once Gandhi started his legal work in South Africa, he really became the major spokesman and advocate for Indian rights [in South Africa]. So had he not gone to South Africa in the 1890s, he would never have become a political animal. 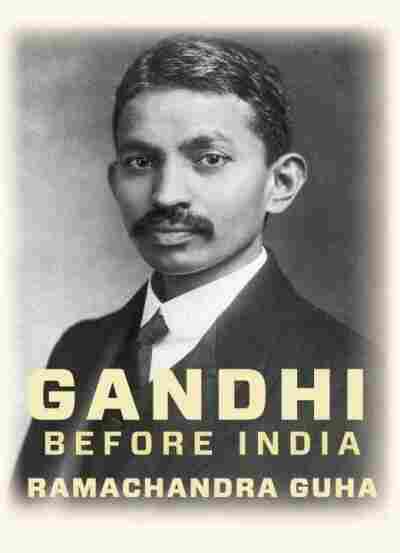 This is partly because Indians were seen as a threat. The Africans were mostly in the countryside. They were dispersed: They were farmers; they were peasants; they were herders; they were huntsmen. ... Indians were coming in direct competition with the Europeans. Indians were merchants — they would sometimes even own ships. They were professionals like Gandhi; they were teachers; they could start their own newspapers. So in that sense, the Indians came into far more direct competition with the ruling whites than the Africans did in the 1890s. And that's why these restrictive racial laws were placed on where they could live, what they could trade, what property they could own, disenfranchising them. And that's where Gandhi comes in.

On the origins of Gandhi's nonviolent methods

Nonviolence for Gandhi had, from the very beginning, a moral dimension and a pragmatic dimension. And while of course we must not ignore or de-emphasize the moral dimension — Gandhi abhorred the taking of life — it also had a pragmatic aspect to it. Gandhi recognized that there was a profound asymmetry between the Indians and the Afrikaners [descendants of Dutch settlers in South Africa]. The ruling race had the money, they had the armed might, they even had the numbers because they were much larger in population than the Indians. So a spectacular act of assassination — you know, you might get rid of one general or one official, but there'd be a brutal crackdown. So I think Gandhi very adroitly and skillfully recognized that the only way to challenge the Afrikaners was through nonviolent protest. And of course he first rested his faith in dialogue, and it's when those negotiations fail that he catalyzes his followers in a movement of resistance. ...

It's in Johannesburg that he first goes to jail. It's his first experience of struggle, of sacrifice. It's where he realizes the power he has and the charisma he commands in mobilizing people. And so it's in Johannesburg that he learns all the techniques and tricks of political activism. He recognizes that with rulers as harsh and unyielding as the Afrikaners, persuasion would get you only so far. If persuasion failed, you had to test them by breaking their laws and courting arrest. So Johannesburg, between 1906 and 1913, gave birth to a method of protest that has been enormously influential throughout the 20th and the 21st centuries.

On The Block: Gandhi's Spinning Wheel, Napoleon's Last Will

On how much Gandhi accomplished in South Africa

He had changed attitudes, but he hadn't changed laws substantially. And this is a criticism that was made, and is sometimes still made of Gandhi by Indians in South Africa — that he left without finishing the battle. What he had done, however, was cultivate the spirit of solidarity, of collective action. He had left behind a legacy that would be carried forward, not just by Indians but by Africans and by Europeans and everybody else. But in terms of getting the restrictive laws changed or removed, he was only moderately successful.

On why Gandhi returned to India

Gandhi was a great man, a visionary, a person of extraordinary moral and physical courage, but he was not a man devoid of ambition, you know — that very elementary desire to make an impact. So in South Africa he saw quite early: 'Here I will merely be the leader of 150,000 Indians; I will be a community leader.' But in India — where a kind of national struggle is brewing, where there's disenchantment, at least among the professional classes, with British rule, where there's a desire for freedom and emancipation — Gandhi feels that India was a much larger stage than South Africa.

Read an excerpt of Gandhi Before India