Accessibility links
Man Reaches For The Sun For A Solution To Pakistan's Gas Crisis A plan to replace imported oil with domestic natural gas has led to fuel shortages and long lines in Pakistan. A businessman has spent $500,000 of his own money to develop an affordable solar car. 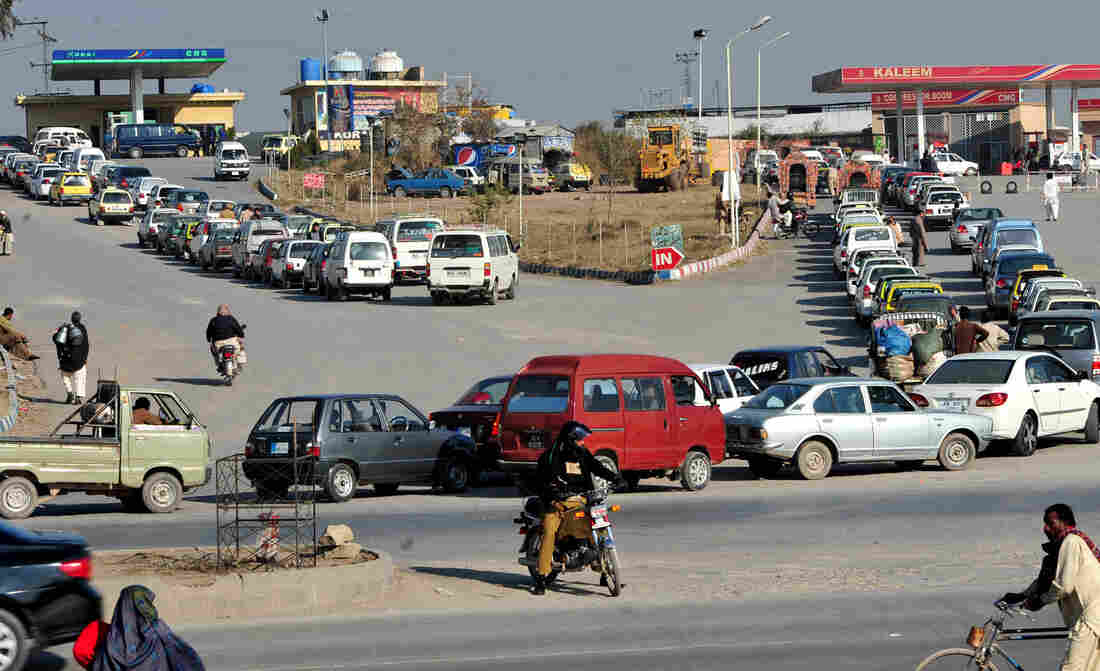 Pakistani motorists wait in line at a refueling station in the outskirts of Islamabad on Jan. 20, 2013. Waits of up to four hours have become a way of life since Pakistan decided to switch to compressed natural gas about a decade ago. Farooq Naeem/AFP/Getty Images hide caption 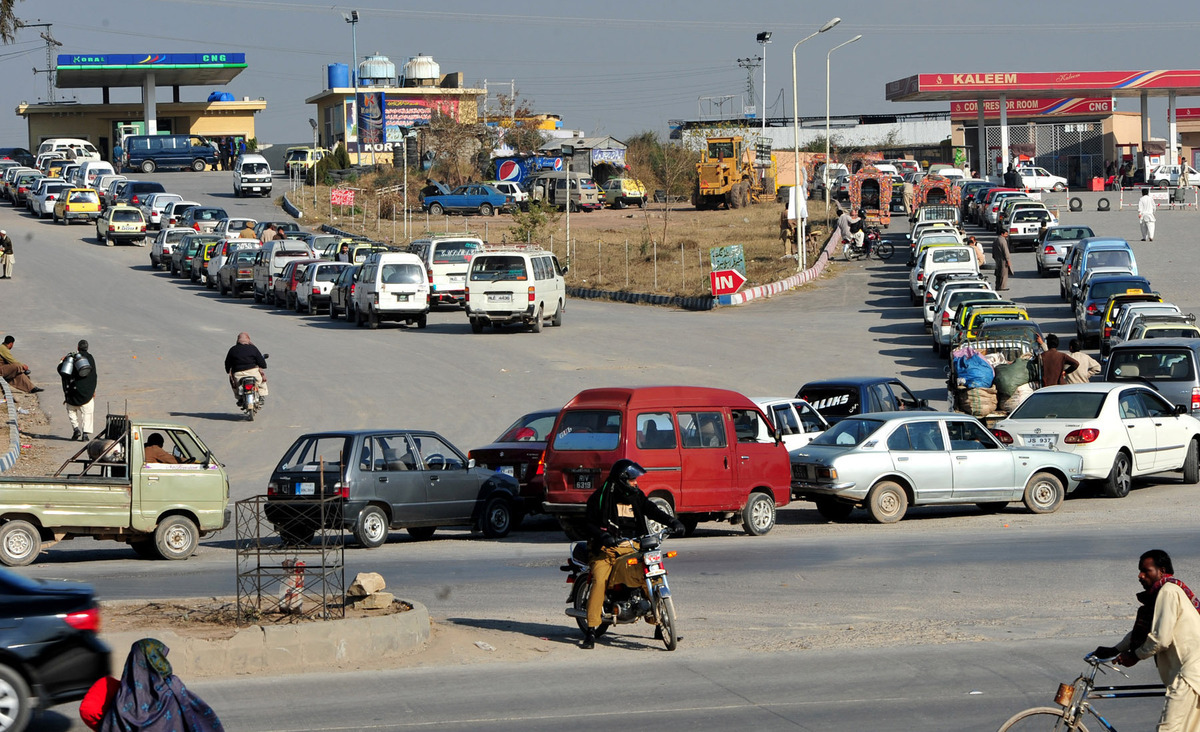 Pakistani motorists wait in line at a refueling station in the outskirts of Islamabad on Jan. 20, 2013. Waits of up to four hours have become a way of life since Pakistan decided to switch to compressed natural gas about a decade ago.

Spring has crept up to the foothills of the Himalayas and, in Islamabad, Pakistan's purpose-built capital, the air is full of the scent of roses and the yelling of birds.

Yet, even in this most stately of South Asian cities, it is impossible to escape the realities of an unstable nation that has yet to figure out how to meet some of the basic needs of its 200 million or so citizens.

Islamabad long ago adjusted to attacks by Islamist militants by setting up roadblocks and turning its government buildings, five-star hotels, villas and diplomatic enclaves into modern-day fortresses, wrapped in razor wire and blast barriers and monitored by a multitude of security cameras and armed guards.

But the more recent blot on the life of the city is much more mundane: It comprises long lines of angry and frustrated motorists, parked along the edge of Islamabad's tree-lined avenues, waiting for hours to refuel their vehicles.

For "long" — read huge. Some of these lines stretch well over a mile. Drivers say it sometimes takes four hours to reach the gas station.

The problem is caused by a major shortage of CNG, or compressed natural gas. Pakistan has millions of cars equipped to run on CNG, more — say officials — than anywhere else in the world.

These vehicles include the small and battered yellow Suzuki taxi driven by Abdul Majid. Majid's taxi is about midway in a line for a distant gas station; he says he's already been waiting for an hour and a half.

He is so bored and fed up with spending half his life in a queue that he's talking about giving up the taxi trade altogether and finding something else. He might be forced to. He says his meager daily take-home pay of about $10 has dropped by half. Like many cars here, his taxi actually can also run on gasoline — but that's three times more expensive and would eliminate his tiny profit margin. Thus, the huge lines.

With a family of six to feed, Majid says he's struggling: "For [the past] three days, I have no bread at home."

Pakistan's government started encouraging people to use CNG about 10 years ago. It wanted to cut the country's hefty bill for imported oil and use Pakistan's domestic gas reserves instead. CNG has the added benefit of being cleaner and cheaper than regular gasoline. At first, the plan was a huge success.

Then, the problems began.

A Solar Solution For The People

As industry and the public competed for energy amid massive and unrelenting power outages, demand for natural gas soared. A court ruled CNG retailers were making excessive profits and ordered a cap on prices, causing hundreds of CNG suppliers to close down. Separatist insurgents in Pakistan's Baluchistan province — where a lot of the gas comes from — regularly bombed the pipelines. CNG began to look like a bad idea. 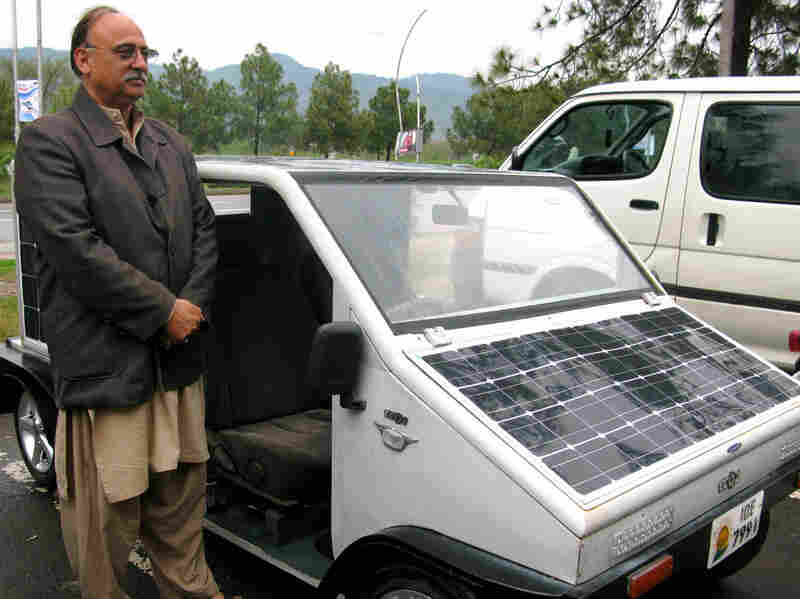 Pakistani businessman Aslam Azad spent $500,000 of his own money to develop a solar car that he hopes will help solve the country's gas crisis. Currently, it can travel about 50 miles before recharging. Philip Reeves hide caption 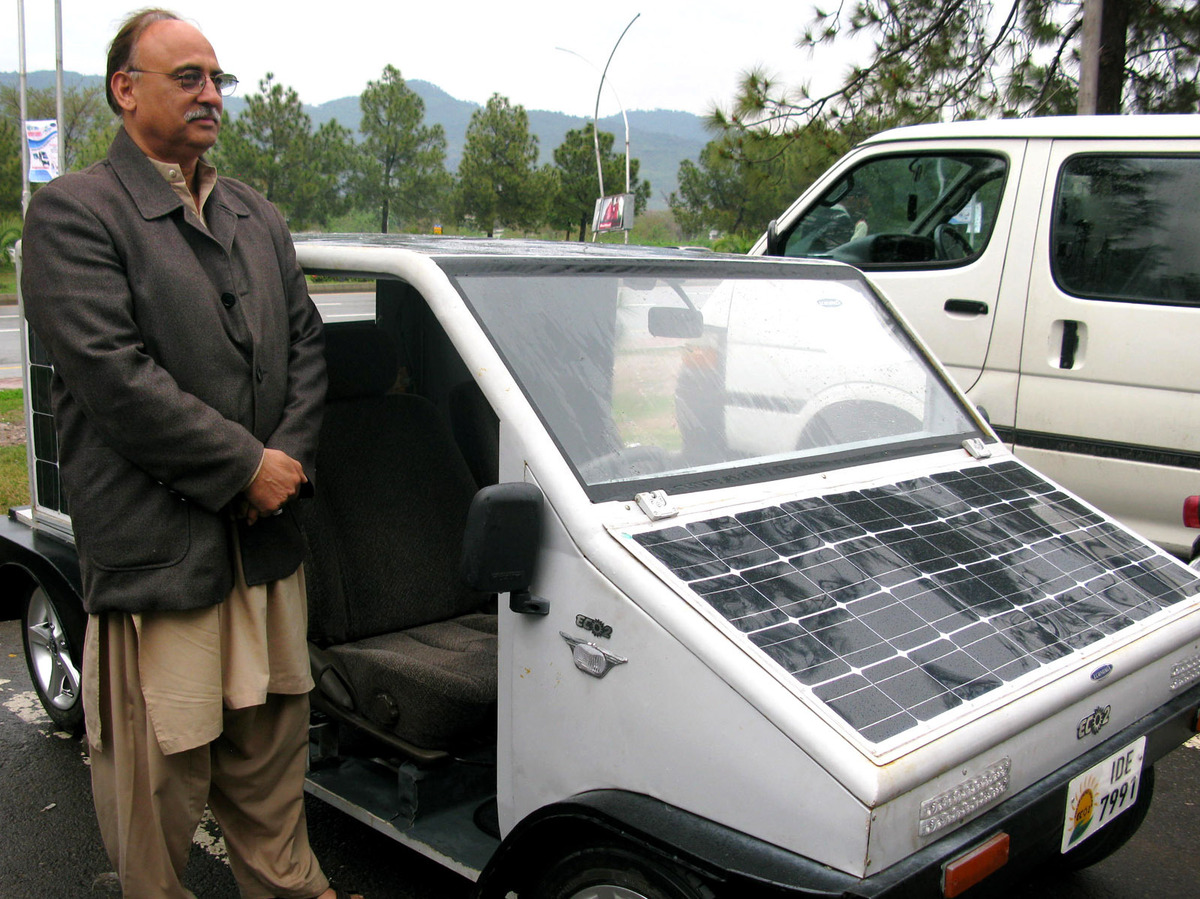 Pakistani businessman Aslam Azad spent $500,000 of his own money to develop a solar car that he hopes will help solve the country's gas crisis. Currently, it can travel about 50 miles before recharging.

When adversity strikes in Pakistan — as it does, regularly — someone usually fights back.

Five years back, Azad began what became a kind of personal mission to find an answer to Pakistan's CNG crisis.

He spent some $500,000 of his own money on creating a car powered by the sun. The prototype looks like a golf cart with solar panels on the roof, hood and sides.

Azad is managing director of a company that specializes in heating and cooling systems and has won some lucrative contracts over the years. But he says building the solar car is not about profit: "This is because my people needs me," he explained, as he drove this correspondent slowly through Islamabad in his solar-powered buggy.

"I'm pretty sure this is what we are looking for," he continued. "This will solve the problems of people, and the lines, and the financial crisis."

The car is powered by solar and kinetic energy (the engine becomes a generator when it's coasting). At present, it can run for about 50 miles a day before recharging, but Azad is planning to replace the current battery-run system with technology that will increase its range by up to five times.

Many other pioneers around the world are also working on solar-powered vehicles, often hybrids, but Azad says his car has the advantage of being unusually inexpensive — just a couple of thousand dollars.

He's confident Pakistan's government will grant him a manufacturing license in the coming months, and that Pakistan's angry and frustrated motorists will leap at the chance to get out of line, and buy his car: "I am pretty sure this will succeed. I have no doubt. I just have no doubt."

Cabbie Ahktar Farooq says he can't afford a solar car; all the same, he eagerly hopes for its introduction, in the hope that other people can.

After spending four hours in one of those giant lines, Farooq has given up hope. The gas station's about to close; he is heading home. It's always like this, he says. "Sometimes we get it [the CNG] and sometimes we don't get it and we just go home, with empty hands."