Accessibility links
Obama's Favorite County — At Least When It Comes To Giving Speeches The president has visited Prince George's County, Md., four times this year. It is the most affluent county with an African-American majority. It also happens to be very close to the White House. 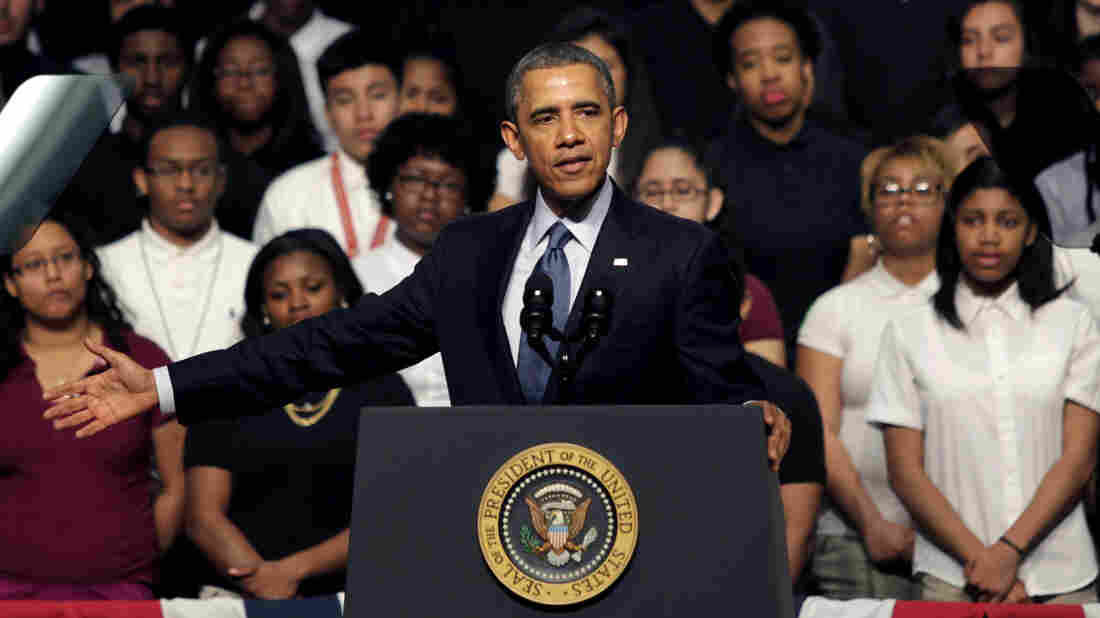 President Obama speaks during an April 7 visit to Bladensburg High School in Bladensburg, Md. It was his fourth visit to Prince George's County in as many months. Aude Guerrucci-Pool/Getty Images hide caption 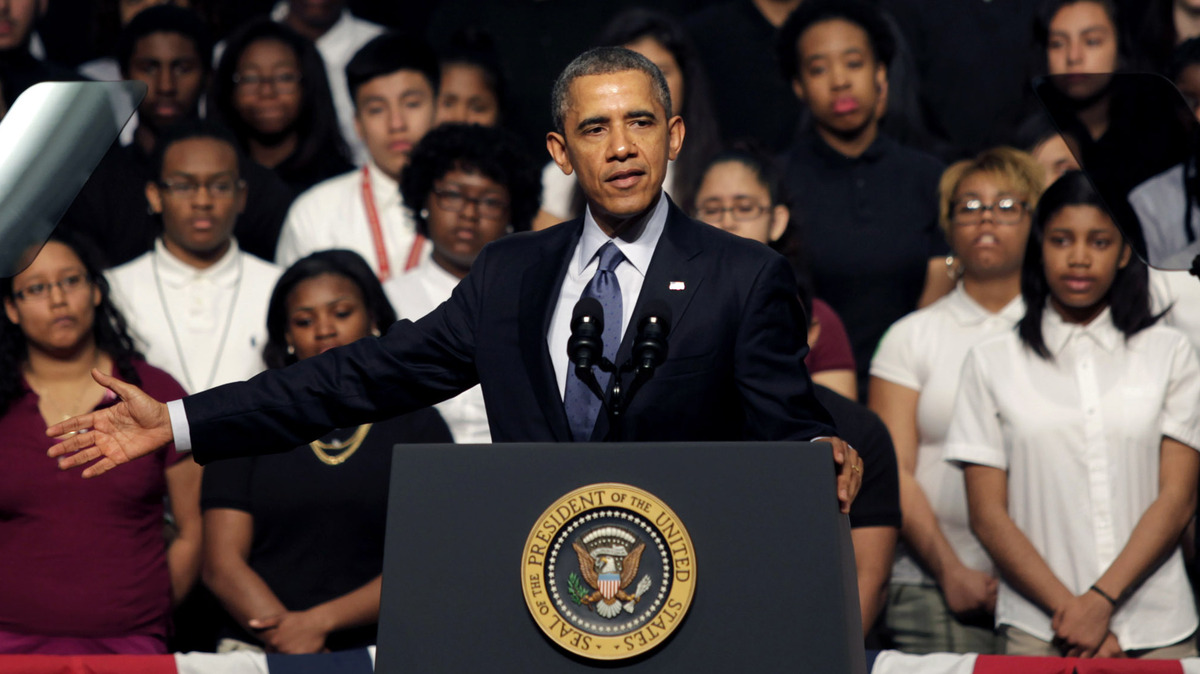 President Obama speaks during an April 7 visit to Bladensburg High School in Bladensburg, Md. It was his fourth visit to Prince George's County in as many months.

Residents of Prince George's County, Md., might just get sick of hearing "Hail to the Chief." President Obama has visited this county to deliver policy addresses more than any other in his second term.

"Hello Maryland. It's good to see you," the president said enthusiastically in January at a Costco in Lanham, Md. "I love to get outside of the Beltway, even if it is just a few hundred feet away." For many years, presidents have traveled to Prince George's County because it is the location of Joint Base Andrews, the home base of Air Force One. It also has a mighty nice golf course and is about 10 miles from the White House.

But these speeches are something else. Since taking office, Obama has spoken at 17 public events in Prince George's County, bringing new notice to a place that has struggled with public corruption, home foreclosures and crime.

To County Executive Rushern Baker, these visits are a sign things have begun to turn around.

"You know for the longest time we would say, 'The president spends more time in Prince George's County than any other place than the White House.' And that was usually him driving here to fly somewhere else," said Baker. "Now he's actually visiting, and the first lady."

From 2010 to 2013, crime overall dropped 27 percent with murders down 38 percent. When Baker took office in late 2010, his predecessor had just been taken away in handcuffs, later pleading guilty to extortion and witness tampering as part of a sweeping FBI investigation into corruption in the county. Now, Baker is pitching his county for the new FBI headquarters, and he hopes the president is listening.

"And we're hoping that the next visit he comes, he cuts the ribbon on the FBI," said Baker. "What better place to build it than here."

If Prince George's gets the project it would be a major milestone for a place that is now the nation's most affluent African-American majority county.

That affluence was on display on a recent Friday evening in a strip mall in the town of Bowie. A group of men, mostly business owners, sat outside a fancy Chinese restaurant wearing golf shirts and smoking cigars.

"This county, the president can identify with," said Mack Jenkins, who owns a construction firm.

He has his own theory about why the president visits so often. It sends a message, he says, that there are people of color doing well, even if it doesn't always get a lot of attention.

"He can come and show the masses that, looky here, they don't talk about them much but guess what they're here, and they're doing OK," said Jenkins.

Like many in Prince George's County, Jenkins moved here decades ago because he saw it as a safe place to raise his growing family. His friend Steve Johnson grew up in neighboring Washington, D.C., but in the early 1990s moved out to the suburbs.

"That's what I can say about this county — I have a sense of belonging," said Johnson. "I belong here."

It could be the president feels much the same way. He did win the county in 2012, with 90 percent of the vote.