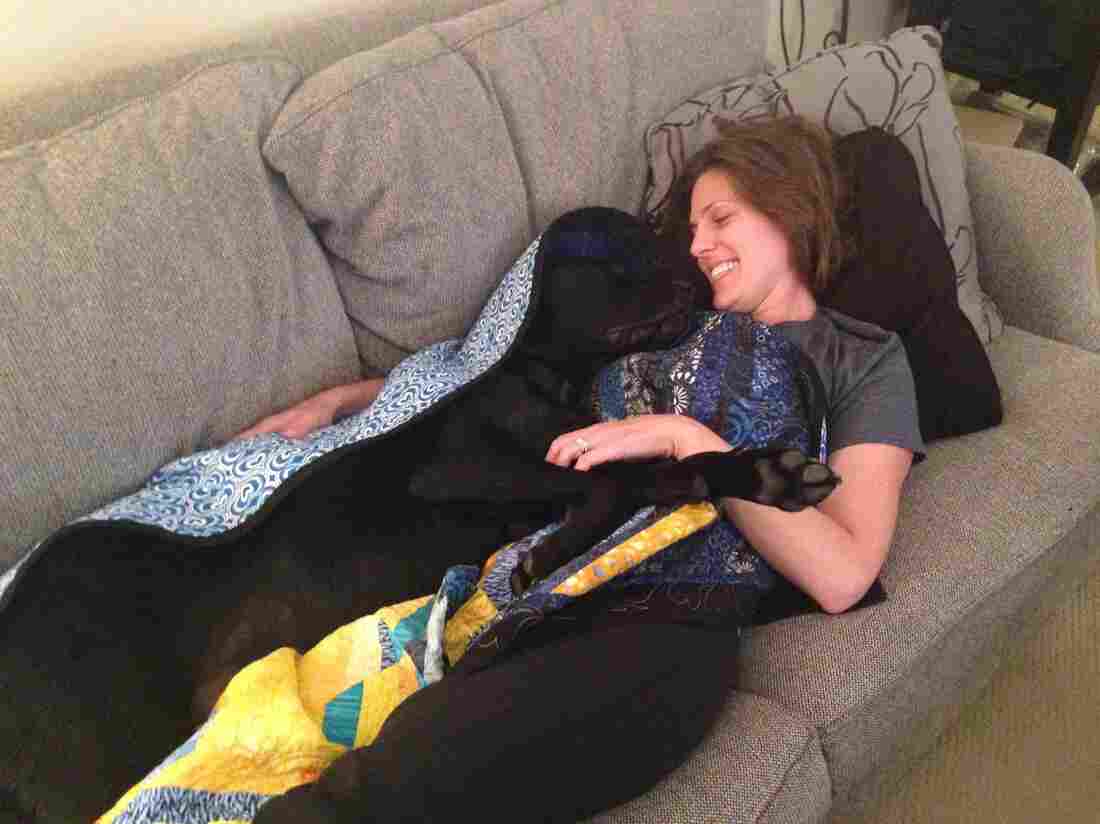 Jessica Kensky lost a leg in the Boston Marathon bombing. When she says, "Brr, I'm cold," Rescue the assistance dog knows to bring her the blanket. Courtesy of Jessica Kensky and Patrick Downes hide caption 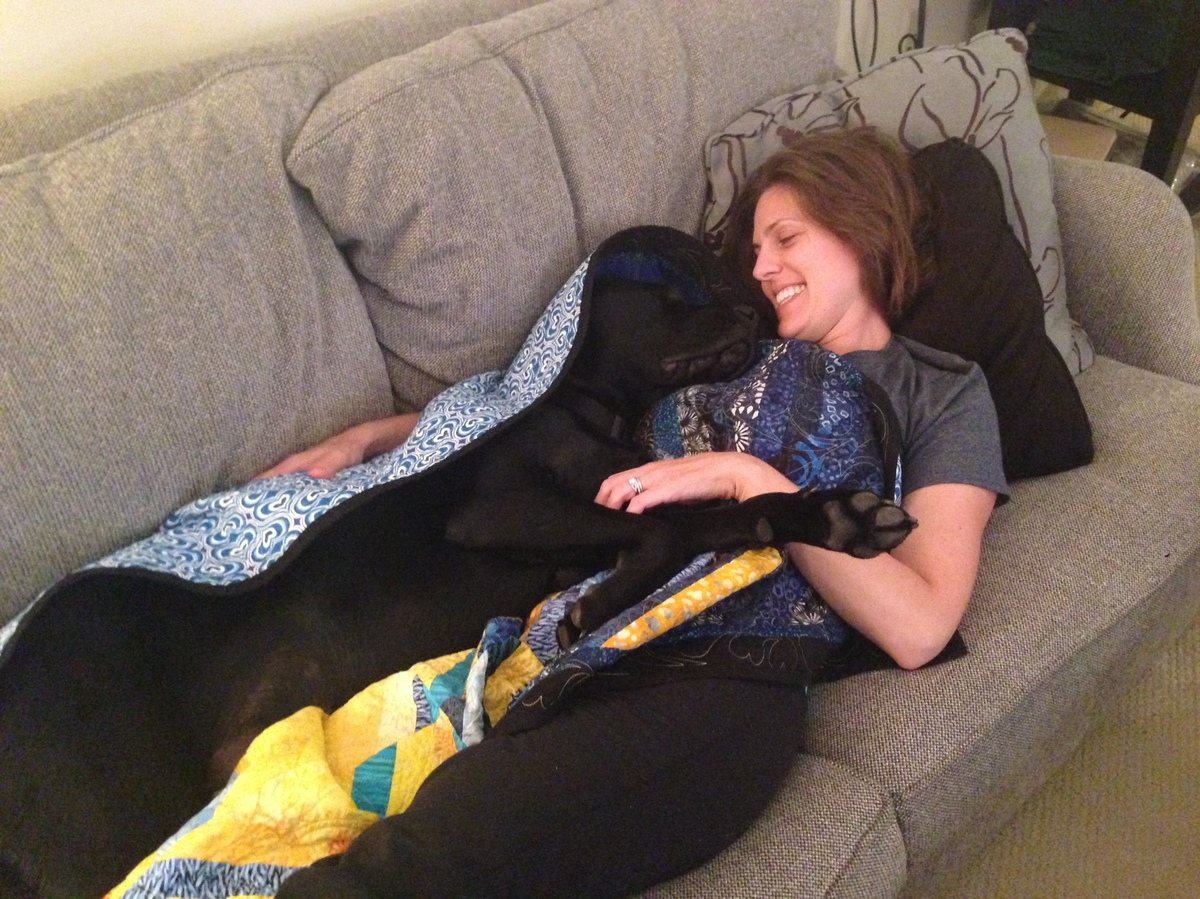 Jessica Kensky lost a leg in the Boston Marathon bombing. When she says, "Brr, I'm cold," Rescue the assistance dog knows to bring her the blanket.

It's Time To Run Again In Boston: Here's The Schedule

At Monday's Boston Marathon, many runners will be on the course to honor the 16 people who lost limbs in last year's bombing. One married couple was among them: Jessica Kensky and Patrick Downes.

Among many dark stories of that day, theirs is among the darkest. They were newlyweds of just seven months when each had their left leg blown off. Their injuries were so severe that they were some of the last victims to leave the hospital.

But we want to tell you an encouraging part of their story. It involves an 80-pound black Labrador retriever named Rescue who is specially trained as an assistance dog. 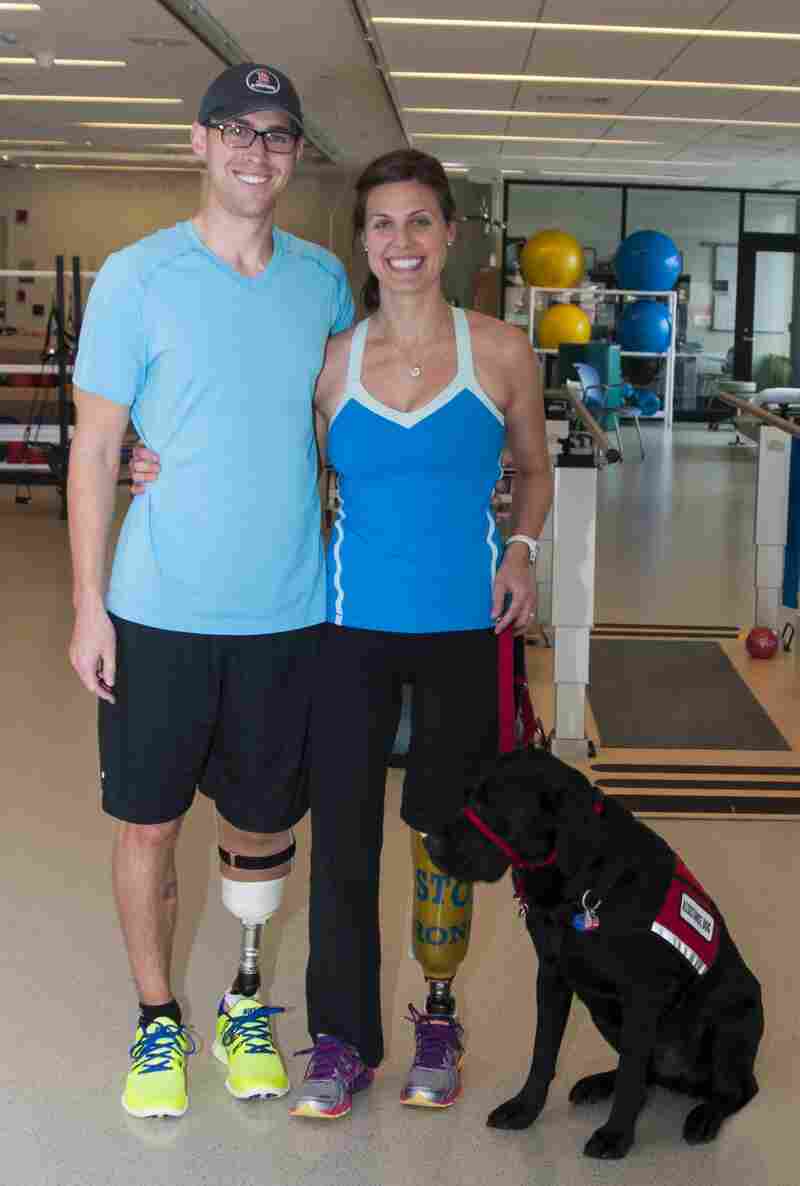 To understand why Rescue came into their lives, you have to know how badly Kensky in particular was hurt. Her remaining leg, the one that wasn't amputated, was so mutilated in the bombing that one doctor thought it should be surgically removed, too.

"My whole Achilles tendon was blown off, a good part of my heel pad was blown off," Kensky says. "But when I woke up, my left leg was already gone, and I couldn't imagine losing my right. And I just — it's such a permanent decision. So I thought: You can always amputate it down the road, but once it's gone it's gone."

So surgeons reconstructed Kensky's right leg as well as they were able to. So far, her "good" leg really isn't so good.

Every Step Is Painful

Kensky wears a high-tech brace on her right leg, which greatly improves her mobility. When she removes the brace, she exposes her misshapen foot and ankle, and a heel no longer as round and padded. She sometimes needs a wheelchair, because walking on her remaining leg is difficult.

"I don't think I really appreciated what chronic pain means and how it just — it rules everything," she says. "When you have that level of pain with every single step, you don't want to take it."

Every day, that pain has her asking herself an excruciating question.

"I didn't know what it was going to be like to try to walk on something and live with a leg like that," Kensky says. "Now that I know, I'm always in the back of my mind wondering if I would be better off with an amputation."

That gets us back to Rescue.

Kensky got Rescue from a Massachusetts nonprofit called NEADS, which trains assistance dogs for people with disabilities. NEADS is offering a free service dog to any marathon bombing victim with a permanent physical disability.

Kensky, because of her continuing mobility problems, is the first to accept that offer. Rescue steadies her when she walks on crutches or with her prosthetic. But that's not all he does.

"Come on — nudge!" she prompts him, and Rescue uses his paws to press an elevator button in Downes and Kensky's new handicapped-accessible apartment building. "Good boy!" she says.

When Kensky drops her keys — "Rescue, fetch!" — the dog picks them up with his mouth and brings them to her.

Rescue can also open doors and retrieve a phone with his teeth — even if he drops it a few times and presses a few numbers in the process.

Having a dog also keeps Kensky and Downes physically active — a challenge for amputees.

Despite Worries, Boston Survivor Heads Back To The Start Line

A Value Beyond Assistance

Kensky and Downes have both had a pretty grim year. She's 33 and hasn't been able to return to her job as an oncology nurse. He's 30 and had to abandon his plan to do a pre-doctoral program in San Francisco, where they had been planning to relocate.

They also suffered shrapnel wounds and perforated eardrums. Since the bombing, they've had nearly 30 surgeries between them, with more operations ahead.

Amid all that, Downes says, Rescue has also had an intangible value just as important as his physical assistance.

"To have a dog like him around, you laugh 10, 20, 50 times more a day, and you can't help but have that lift the mood," Downes says. "And he's a huge cuddler. ... He's just constantly giving us hugs and kisses and entertaining us, and he's a wonderful gift in that way."

"That week he came, for the first time, I started sleeping through the night," Kensky says. "We would be up, 3, 4 in the morning, sad, depressed, anxious. Not that I don't experience those feelings anymore, but it was incredible to sleep through the night. And, I mean, I have to attribute it to him. He was the change."

Here's another command Rescue knows (Kensky admits she uses it mostly for "cuteness"; it comes in handy when she's relaxing on the couch):

"If I'm over here, and I have my leg off and I'm watching a movie," Kensky demonstrates, calling out to Rescue: "Brrr, I'm cold." 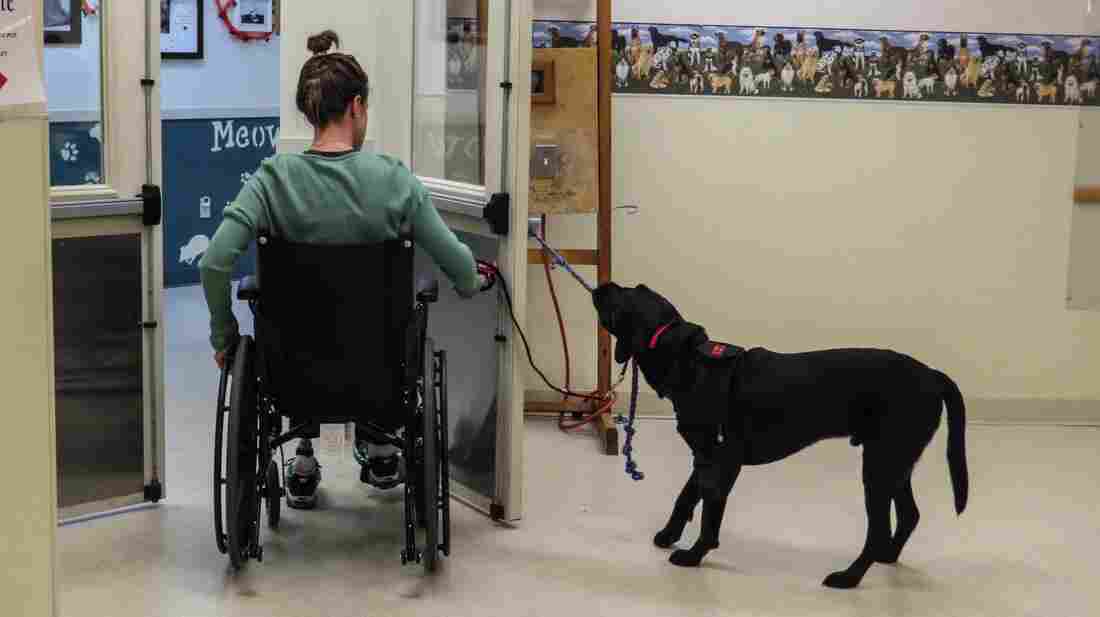 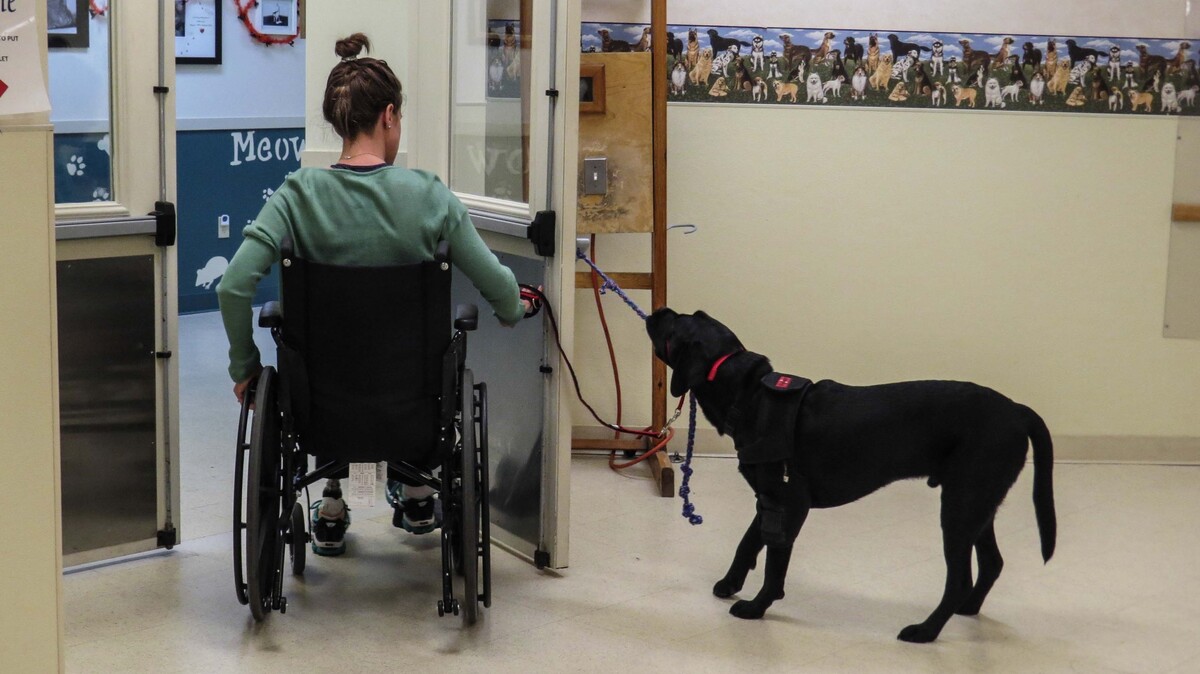 At that, Rescue heads for a blanket across the room. As he drags it back to her, getting it comically tangled in his paws, you realize how a smart, lovable dog who brings laughter to a house that hasn't heard much of it in the past year can be a transforming presence.