Accessibility links
The Boston Marathon Through The Eyes Of Two Men Who Love It The 117-year-old road race is full of lore and rich with history. We talk to two men who likely know the marathon better than anyone else on the course today. 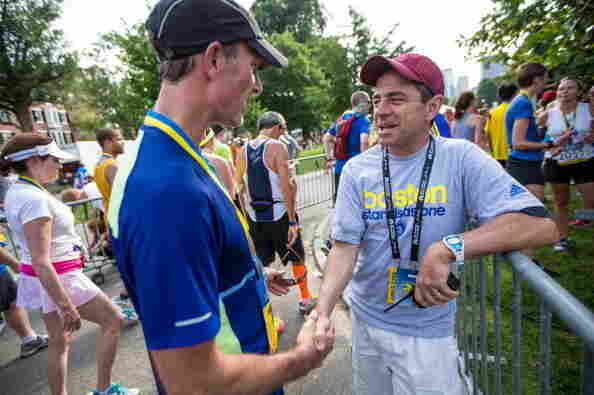 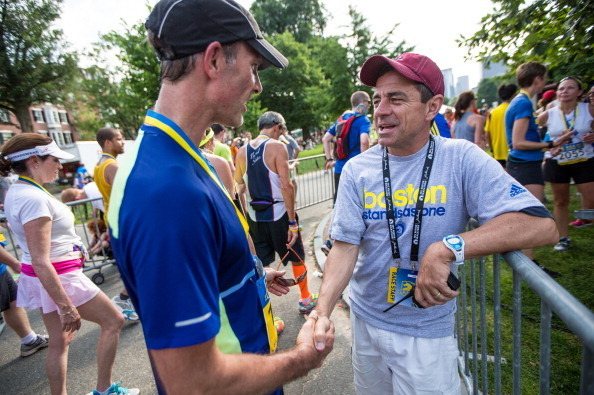 Dave McGillivray likely knows the Boston Marathon better than anyone else.

McGillivray is the race's director — responsible for all the details of the oldest and most prestigious marathon in the world. And for the past 41 years, he has also run all 26.2 miles of the course. For the past 27 years, he's done so after his work duties are done.

Year after year, he heads out to Hopkinton after tens of thousands of runners have crossed the finish. He completes his 26.2-mile trek as the sun sets, after the spectators have gone home and the volunteers have cleared the water stations.

On Monday, the 118th running of the race, the mechanics won't be any different.

But when we meet in February, he's fretting. The twin bombings of 2013 that left three dead and more than 200 injured mean that, at the very least, an already complex event will be even more so. To begin with, he says, the number of runners — 36,000 of them — will rival the field that ran the 100th Boston Marathon.

"I don't know how people are going to react," he says. "No one is going to know until we get there."

Runner Returns To Boston With A New Outlook On Life

Last year things were on automatic pilot, he says. The skies were blue, the temperature perfect; few runners had to be treated by the medics. He texted the executive director of the marathon to say that 75 percent of the runners had crossed the finish line. He asked if he could head to Hopkinton to begin his 26.2-mile journey.

"Beat it," the executive director wrote back.

The Ragged Edge: A Runner Chasing Greatness Finds His Muse

Two bombs had detonated near the finish line.

McGillivray asked a state trooper to give him a lift back to Boston. The ride was a blur, close to 27 miles in 20 minutes.

He saw carnage when he arrived at the finish. McGillivray saw the emergency vehicles and the rush to save lives; he saw the panic and the injured.

He walked toward the finish line, and a police officer stopped him.

"I'm the race director," he told the officer. "I need to go up there to see what's going on. It's kind of my race."

The cop looked at him. Suddenly, things were bigger than the Boston Marathon.

The officer said, "It's not yours anymore."

Tom Derderian has probably thought about the Boston Marathon more than anyone.

He wrote a history of the race. In the mid-1970s and into the '80s, Derderian was running alongside greats like Alberto Salazar and Bill Rodgers. He was coached by Bill Squires at the Greater Boston Track Club. In short, Derderian was in the thick of it when long-distance running was dominated by Americans and inspired a nation. In 1975, Derderian set his personal best at Boston with a time of 2:19:04.

Now in his mid-60s, Derderian doesn't bother running Boston. As he puts it, he's "old and slow" so he's not a contender. Running instead of racing is "just boring."

The race has changed quite a bit over its 117 years. When it began, it was a few young men pounding dirt roads in boots. In the 1970s, when demand for the race outpaced supply, the Boston Athletic Association introduced qualifying standards to limit the pool, which made Boston even more popular.

"It sort of became the whole theme of the race," McGillivray explains, "that if it wasn't already the holy grail, it quickly became the holy grail of marathoning, because it was the only race other than the Olympic Marathon where you had to qualify. And that became the everyday person's Super Bowl and World Series and just bucket-list item."

Dave McGillivray relishes the change, saying the "walls of intimidation have crumbled." In the '70s and '80s, Boston wasn't about covering the distance; it was about how fast you could run it.

"It's a whole different purpose now," McGillivray says. "It's about feeling good about yourself."

"There were tons of people cheering; but they weren't cheering for anything interesting," he says.

Derderian, as you may have guessed, yearns for the golden days — like that race in 1982, when Americans Dick Beardsley and Alberto Salazar fought over every inch of the course for the entire two-plus hours. It was a fistfight, a work of art in which both athletes gave so much of themselves that it ruined their bodies and neither one ever reached those heights again.

"The marathon is a mirror of history," Derderian says. "The original idea of the marathon was the 1800s idea, the 19th century notion of the young man sacrificing for country."

That's the myth of Pheidippides, which gave rise to the marathon distance. As the story goes, the Greek foot soldier was sent from Athens to Sparta (140 miles) to ask for backup against the invading Persian army. After a Greek victory in Marathon, Pheidippides was sent back to Athens (about 26 miles) to deliver the news.

"Rejoice! We conquer!" Pheidippides screamed, before he collapsed and died.

Derderian says that myth rang true in the early days, when a marathon was seen as a "dangerous thing to do." It's been through numerous identities since, from an event in which warriors could test their strength, to a popular spectacle worth betting on, to a symbol of fitness and healthy living. The marathon's identity today is all about doing good and raising money for charity.

The bombing, Derderian says, may be bringing things full circle.

McGillivray's love affair with the Boston Marathon began when he was just 17 years old. He was a senior in high school and told his grandfather that he was going to run Boston. His grandfather told him he would wait for him at Coolidge Corner, mile 24.

When the day came, McGillivray couldn't make it past the hills in Newton, which begin around mile 19. He ended up at the hospital. His grandfather spent all day waiting for him at mile 24. Later, after he learned McGillivray had dropped out, he encouraged him to try again the next year.

McGillivray's grandfather died two months later. So that year, McGillivray thought about him as he logged the training miles and once again made it to the starting line in Hopkinton.

"I look around me and realized that's where they buried my grandfather," McGillivray says. "He said he'd be there, and there was his tombstone. Maybe he wasn't there physically, but he was there spiritually for me right there on the marathon course."

McGillivray picked himself up and finished in 4.5 hours.

"That's when I said I'm going to run this race every year for the rest of my life," he says.

McGillivray had run Boston, uninterrupted, for 40 years before the bombings.

It's Time To Run Again In Boston: Here's The Schedule

I meet him at the finish line of the Boston Marathon. It's right smack in the middle of downtown Boston, right next to the Boston Public Library, the oldest in the country, and across the way from the Gothic revival building of the Old South Church.

The finish line is painted on the asphalt, blue and yellow and white. Stand there long enough and you'll see tourists get out of their cars and snap a picture. Or you'll see a runner pause for a moment, like a pilgrim at an altar.

About 11 days after the bombings, McGillivray snuck out quietly to Hopkinton with a friend. With their two sons acting as a support crew, they ran the empty course. They ran through Ashland and Framingham, through Wellesley and the hills of Newton. And finally into Boston.

He says he doesn't really remember running the course. He says he remembers feeling sad, but proud at the response. He said he doesn't remember thinking about the physical ails that afflict a body running 26 miles.

He made it to Boylston Street a little after 2 p.m. It meant closure.

"Runners won't be denied," McGillivray says."We lost a little bit. We were all victimized. But, at the same time, we're back. I always feel like a scar on your body is stronger than the original skin, and that's how I feel about this situation."