Accessibility links
Shirley, This Is The Dawn Of A New 'Mad Men' Sunday night's episode capitalized at last on the show's notoriously ambivalent, slow-burning approach to paying any attention to race. 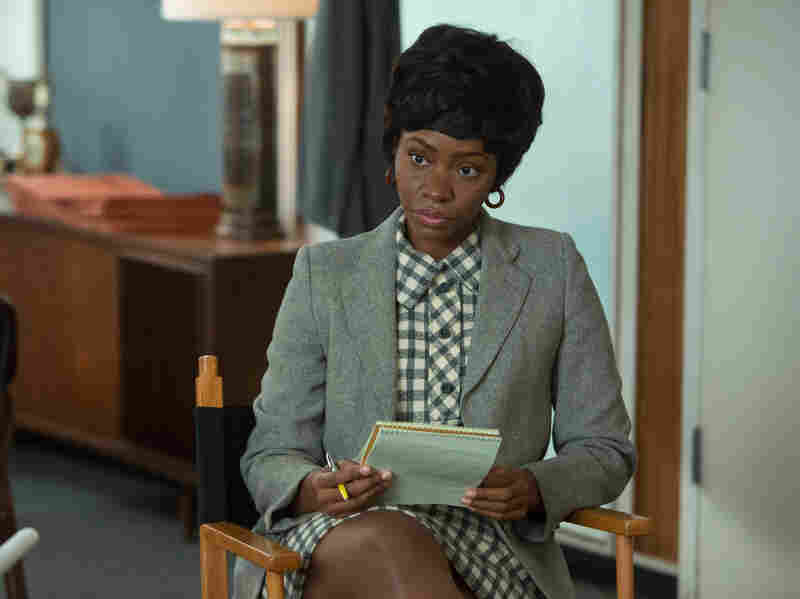 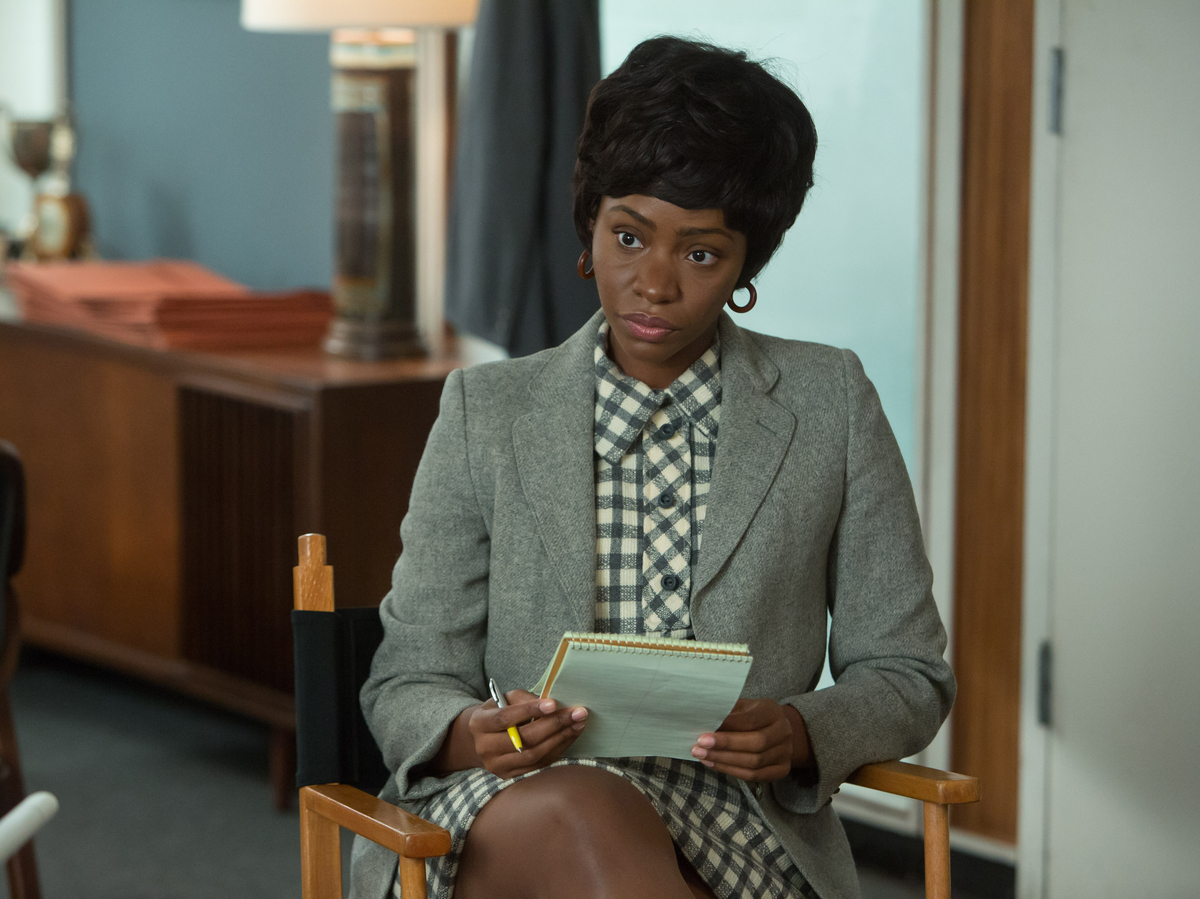 Teyonah Parris as Dawn Chambers, whose future changed quite a bit on Sunday night's Mad Men.

[This post discusses the plot of Sunday night's episode.]

Once Mad Men moved into the early-middle part of the 1960s, people began to ask an increasingly urgent question: Where was the civil rights movement? Where were the black people? Was Sterling Cooper (Draper Pryce) (And Partners) really so sheltered that race barely touched its tiny world?

Mad Men's very first scene, in fact, had found Don Draper attempting a conversation with an African-American server at a bar — whom Don was pumping for information about cigarette purchasing — only to be interrupted by a white manager eager to apologize for the server's inappropriate chattiness. Race has been there, at the very edges, for a long time.

And sometimes, it's gotten more attention, as it did when Don's agency interviewed black women in the wake of a civil rights protest and wound up hiring Dawn, who became Don's secretary. But for the most part, race has reared its head primarily to demonstrate the clumsiness and blithe racism of almost every white character's approach to it.

Sunday night, however, both Dawn and Shirley — a recently added black secretary who, unlike Dawn, rocks very short dresses and natural hair — got their very own conversation, just the two of them, that subtly realigned the show's consideration of race from one that was primarily about the experiences of white people to one that was at least curious about, if not yet diving deeply into, the experiences of black people, and specifically black women.

Dawn's story began with a bang as we learned that Don, despite being on an involuntary leave of absence about which he's told very few people, is still meeting up with Dawn to get updates about what's going on in the office — not to mention having her take his calls and keep Megan from finding out he's not working.

We saw a scruffy, robe-wearing, boozing Don put on his full Don Draper drag, from hair to tie to shoes, just to briefly greet Dawn at the door. She knows he's not working, so he's not literally trying to fool her, but it was fascinating to see Don trying so hard to maintain the illusion of his status to an audience consisting solely of his black secretary, whom he appears to trust a great deal, meaning it probably really was for her benefit, and not to avoid gossip. That gussying-up process demonstrated a strange, twisted respect for her — and concern over what she thinks — to which it would probably be hard for him to admit.

When Sally made a surprise visit to the office to visit her father and had to be dealt with by Lou Avery, Avery took it out on Dawn, demanding that she be reassigned. And as he demanded that Joan reassign Dawn, he said — right in front of her — that he knows Dawn can't be fired. Dawn knew what he meant, and quite reasonably, she took offense to the implication that she gets special treatment, particularly special positive treatment.

Meanwhile, Peggy, who continues to humiliate herself over Ted and flounder in Don's absence, mistook the roses Shirley had received from her fiance for ones meant for Peggy herself. Shirley, not wanting to make waves and counseled by Dawn to drop it, let her boss steal her Valentine's Day flowers. Was Peggy grateful? Certainly not. When Peggy found out the mistake she'd made, she took out her embarrassment on Shirley and — you guessed it — went to Joan and demanded a different secretary. So after beginning the day with bosses who probably didn't deserve them, Dawn and Shirley both found themselves pushed out of their gigs for reasons primarily related to their bosses' huge egos.

Joan responded by moving Dawn to reception, but right on cue, Bert Cooper made it clear to her that he was not ready for "colored people" to "advance" as far as the face of the agency. So now Joan had both Dawn and Shirley to reassign, and she had had it. She was saved when Jim Cutler, a character who's remained a bit obtuse thus far, suggested that she, Joan, needed to drop her dual responsibilities as a partner/account "man" and head of personnel and move up — move on up? — to a higher floor. He told her to find someone to take over personnel juggling, and to make it someone who didn't mind not being liked.

Having just seen Dawn barely restrain herself from well and truly giving it to Lou Avery, Joan gave Dawn her old job and gave Lou — Lou, of the obnoxious "can't be fired" remark — Shirley.

On the one hand, this was a story of the good people getting the upper hand over the bad ones, in that Dawn grinned to herself as she sat in Joan's office, promoted in part as a result of her obviously thick skin and even temper. Shirley got away from the rudeness that Peggy directed at her and got a new assignment — and got to keep her flowers.

On the other, the show went to some pains to show a conversation between Dawn and Shirley early in the episode that suggested they are friends, but they are also allies of a sort whether they want to be or not, as they are treated as interchangeable at work. (Wryly, Dawn calls Shirley "Dawn," and Shirley calls Dawn "Shirley.") They support each other, they give each other advice, they gripe to each other — they are office pals in the way everyone needs office pals.

Dawn is Shirley's friend, but it took Joan to fix her problem. Shirley is Dawn's friend, but ... same thing. And while Lou didn't get away with his play to get out of having a black secretary, this puts Shirley in the position of working for a boss who thinks she, too, can't be fired. How is she going to fare working for a man to whom she was assigned as a sort of sweet revenge?

These women, as smart as they are, don't have the pull to do anything about Lou's hostility or Bert's concern for appearances. And, in fact, neither does Joan. Dawn still isn't sitting at reception. She got the job Joan was sick of doing, while Joan moves up. Peggy got to grievously mistreat Shirley, and won't need to make it right the way she would need to if she'd mistreated someone with more status in the office.

What they're telling here is in part a story of the complicated way race and gender are interacting for these women. Joan and Peggy would undoubtedly never dream of saying that they're relieved to have somebody in the office with less status than they have in the eyes of somebody like Bert Cooper, but ... they probably are. Joan earned her partnership in part by suffering the gruesome effects of the other partners' lack of respect for her. She knows what it's like to be in a workplace where people treat you as less-than. She's known for years. She's smarter than most of the men who have outranked her; she was key to the creation of Sterling Cooper Draper Pryce in the first place. Now, even inside the office with the people she works with directly, she gets to be privileged.

Think about Peggy early in the show's history. Peggy didn't outrank anybody. Peggy was on the bottom of the totem pole. But now, as she finds herself rising through the ranks, does she remember what it was like to have someone's rage vented on you? She doesn't seem to. Does she take her rage out on the people who are causing it, particularly Lou? She does not. She takes it out on her secretary, much the way Don used to take his rages out on her, much the way he treated her as automatically less deserving of respect than he was, as if he was doing her a favor every time he didn't yell at her.

(Perhaps that was what the money was for.)

While there's a long way to go yet in fleshing out these characters and these stories, Dawn's promotion and the complexities of Joan and Peggy's interactions with Dawn and Shirley were a big step forward for Mad Men beginning to take the kind of interest in the way flawed people dealt with race — and what that meant for the people they dealt with poorly — that it has with gender from the start.

Don is not in charge right now; Don is not running the show. Don reveals himself exclusively to the two women he should most easily outrank: his secretary and his daughter. Right now, women are driving the story, all tied to each other not just through story but through imagery — over and over, we saw women carrying flowers.

And where's Don? Well, Don is just trying to get his bearings. It's a welcome change.