Accessibility links
To Keep Business Growing, Vendors Rebrand Pot's Stoner Image In Colorado, where recreational pot is now legal, stores are working hard to stand out — marketing to fans of organic, locally grown produce and trying to liken using pot to enjoying a glass of wine. 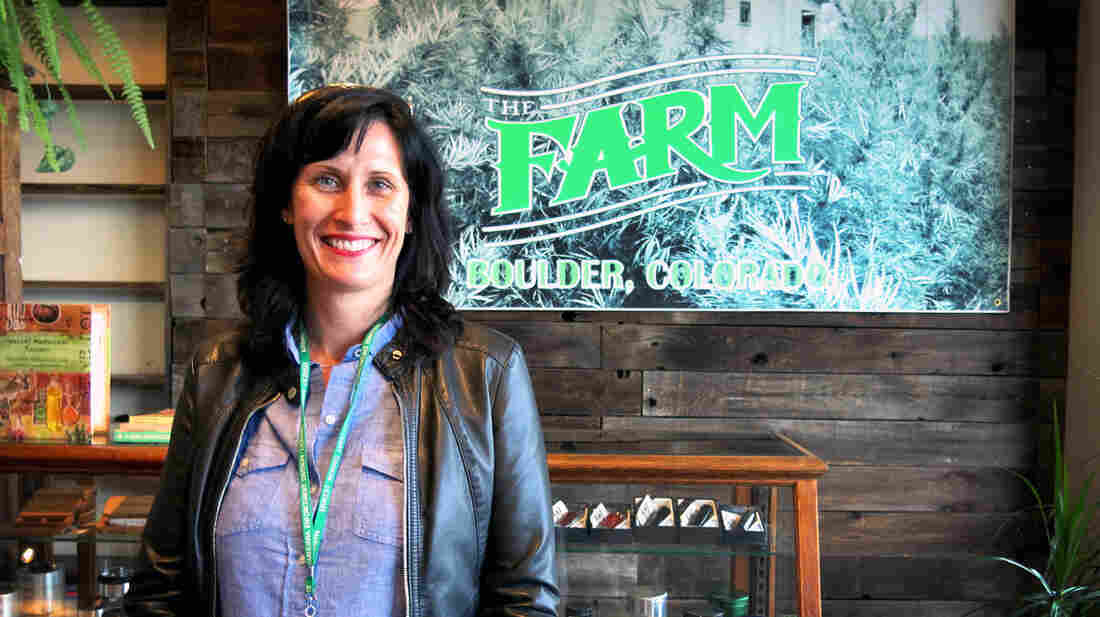 Alison Ledden, marketing director for The Farm, a recreational marijuana store in Boulder, Colo., says some customers come in thinking they're at a specialty grocer, not a marijuana store. Luke Runyon/KUNC hide caption 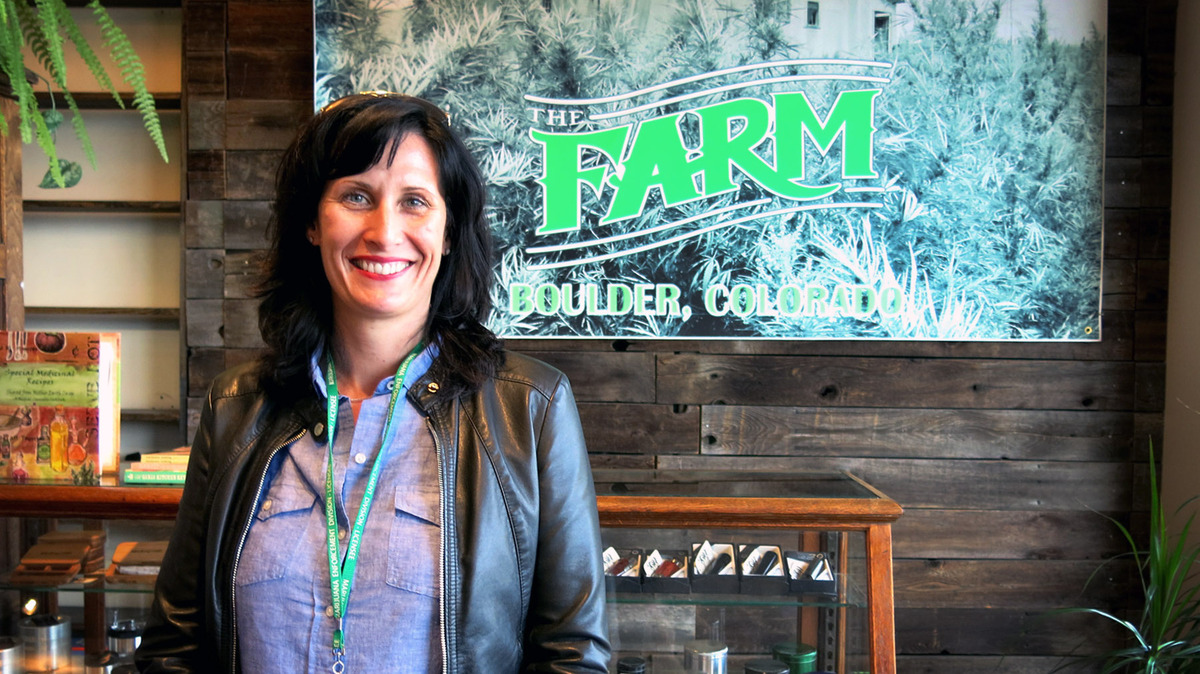 Alison Ledden, marketing director for The Farm, a recreational marijuana store in Boulder, Colo., says some customers come in thinking they're at a specialty grocer, not a marijuana store.

From the outside, Jan Cole's recreational marijuana store in Boulder, Colo., just feels welcoming. Big glass windows let in natural light, and the walls are painted in soothing earth tones. Cole used her background in spa management to build a "warm and inviting" pot shop that puts customers at ease.

In fact, the store's name, The Farm, is so inconspicuous, "we have a lot of people who come in think that we might be an organic food grocer or something," she says.

And that's exactly who Cole is trying to attract: the tote-bag carrying, socially conscious, natural-food crowd. She advertises her cannabis as pesticide-free, organic and, of course, locally grown.

"I don't think we'll ever be as big as Whole Foods, but Whole Foods is a good example of the type of clientele that we attract," she says.

This all reflects Cole's attempt to break away from the pack. With recreational marijuana use now legal in Colorado, marijuana businesses are finding themselves competing for customers in tight marketplaces.

About 200 recreational marijuana stores have opened in Colorado since Jan. 1. And as the market becomes more and more saturated, everyone is looking for an edge. 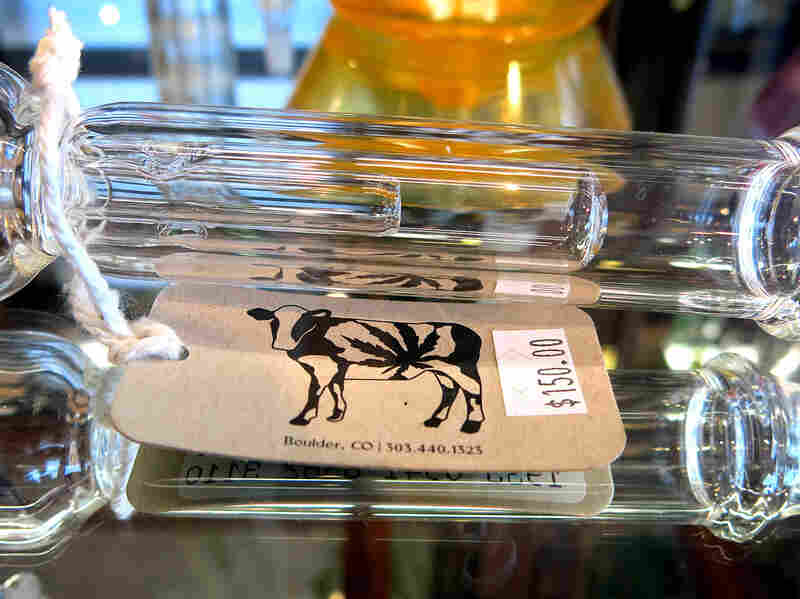 The owner of The Farm says the store's aesthetic is designed to appeal to consumers who buy organic, locally grown produce. Luke Runyon/KUNC hide caption 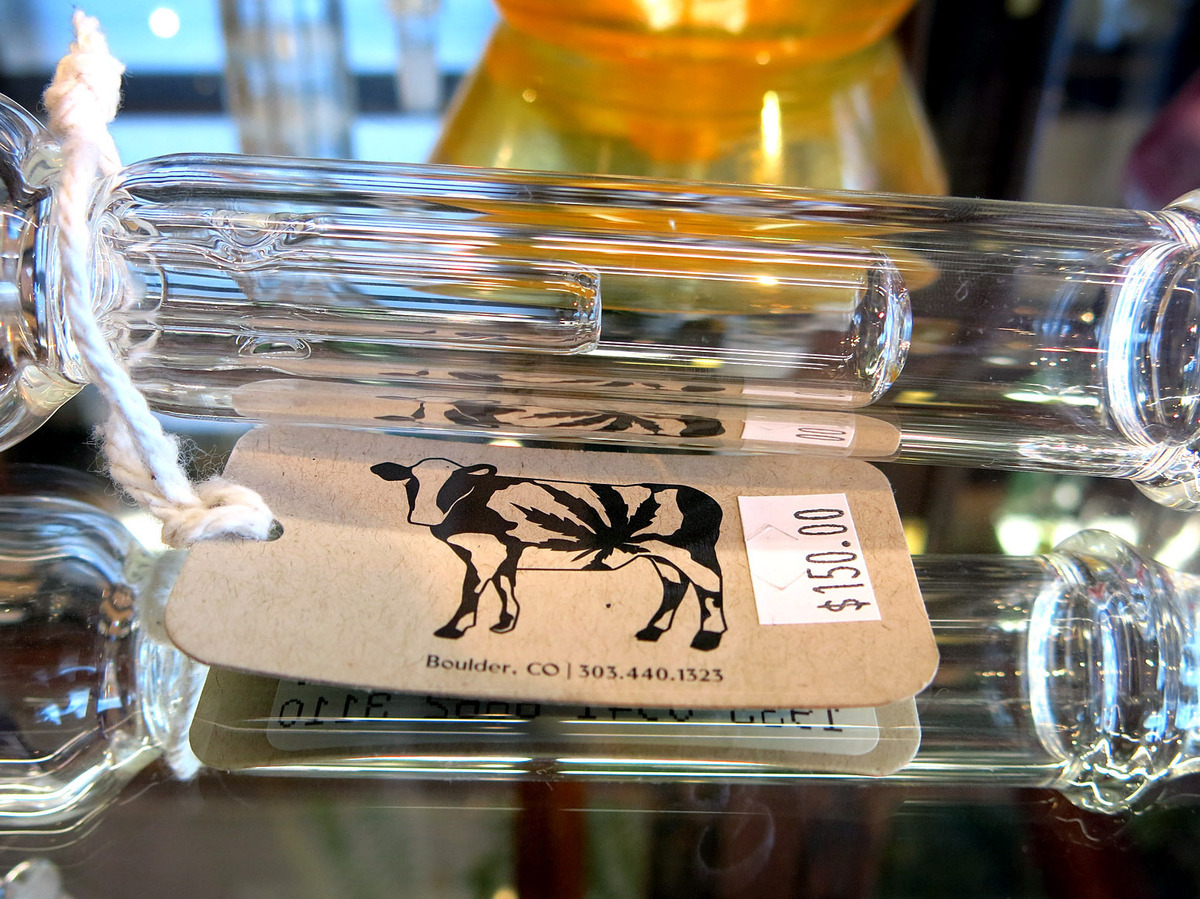 The owner of The Farm says the store's aesthetic is designed to appeal to consumers who buy organic, locally grown produce.

Jennifer DeFalco is creative director for Cannabrand, a marketing agency named for a mashup of "cannabis" and "branding." DeFalco and her business partner are banking on Colorado's marijuana industry becoming big business — one in need of flashy logos, memorable catchphrases and eye-catching ads.

"Cannabis is here to stay. It's not going anywhere. The industry is just beginning," she says.

Because it's so new, DeFalco says that most people who have already popped into a recreational pot shop are the first adopters — people who have tried marijuana before. But the whole point of marketing is to grow a business by reaching people who are on the fence about trying marijuana.

"So part of the rebranding of cannabis is really just making the dispensaries more inviting and more welcoming," she says.

But when it comes to advertising, it's not as simple as buying ads on the TV or radio. State rules in Colorado forbid shops from advertising on media where more than 30 percent of the intended audience is younger than 21. That kind of audience data is not readily available. If challenged, it could be tough for marijuana businesses to prove kids aren't seeing a particular ad.

"One thing that is interesting and important for the industry is this question of exposure to kids," says Margaret Campbell, a marketing professor at the University of Colorado Boulder. To reach new markets, she says, the industry as a whole needs to strip away the marijuana user stigma.

"[Businesses are] going to try to go beyond their core quote-unquote 'stoner user' to expand and have it be acceptable at cocktail parties," she says.

At a recent cocktail party at a gallery in Denver's arts district, Amy Dannemiller is trying to do just that: build a new business around removing the stoner stereotype.

The Green Rush Begins: Investors Get In On Pot's Ground Floor

Each month, Dannemiller, who uses the alter ego Jane West when planning pot gatherings, throws upscale parties where attendees bring their own marijuana and pay a $95 charge for fancy hors d'oeuvres and an open bar.

"It's just basically a big social event where everyone can enjoy cannabis like they would a glass of wine," she says.

But even the party's attendees say that, culturally and legally, marijuana isn't yet the same as a glass of wine — employers can still drug-test workers. One woman at the party, for example, declines to give her name, saying her job could be at stake.

"That's the hurdle. People can't be associated with it," she says. "Everyone does it, but they can't tell anyone about it."

That's a tricky legal hurdle that'll take a lot more than advertising and branding to overcome.