Accessibility links
'Ready For Hillary': Clinton's Campaign-In-Waiting A shadow campaign is underway, raising small donations by selling T-shirts and baby onesies and holding fundraisers, all just waiting for Clinton to say that, yes, she is running for president. 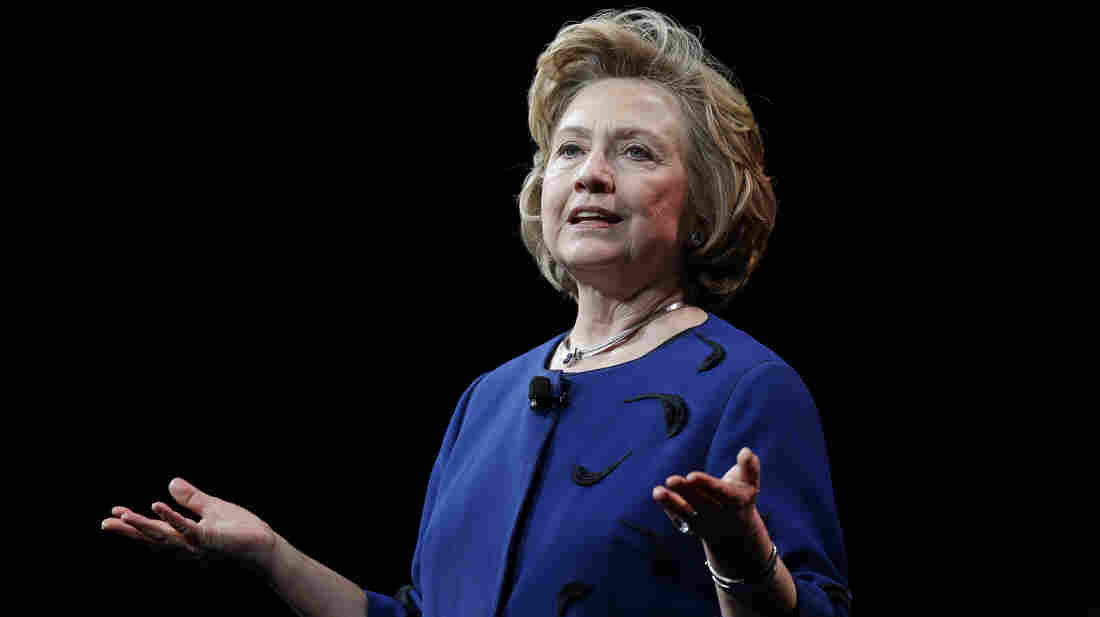 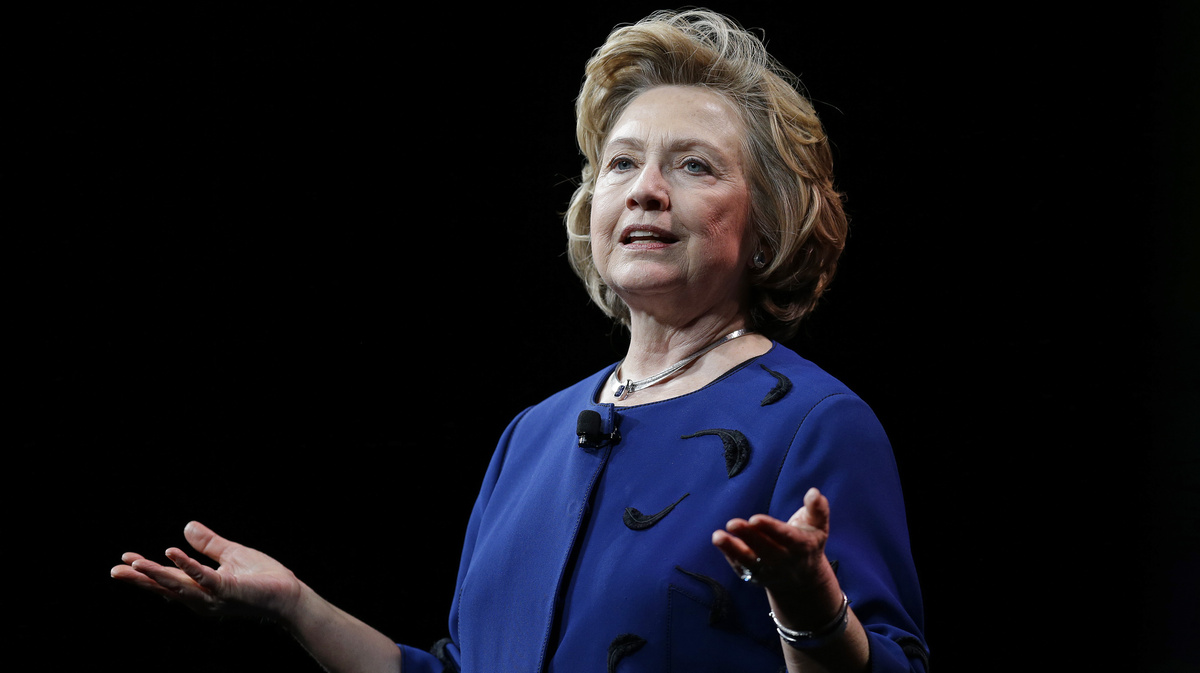 In a high-rise office in Rosslyn, Va., Adam Parkhomenko is selling campaign paraphernalia for a campaign that may or may not happen.

"Bumper stickers, magnets, and then we have everything from T-shirts, we have baby onesies that we're almost out of now," says Parkhomenko.

Parkhomenko runs a group called Ready for Hillary. It's more than a Clinton fan club: It's a superPAC, a list-building superPAC.

The next presidential election is more than two years away. Nevertheless, an unprecedented amount of infrastructure is under construction for a Hillary Clinton campaign that is still a matter of speculation.

"Ready for Hillary is focused on the grass-roots piece of organizing, and making sure that all throughout the country, if she does this, that there's an army of grass-roots supporters behind her from Day 1 that are ready to go," Parkhomenko says.

This kind of bottom-up grass-roots organizing was not a strong suit for Clinton's 2008 campaign. But the shadow campaign developing in advance of a possible 2016 sequel is focusing on the ground level. Ready for Hillary raises small donations by selling baby onesies and holding small-dollar fundraisers. 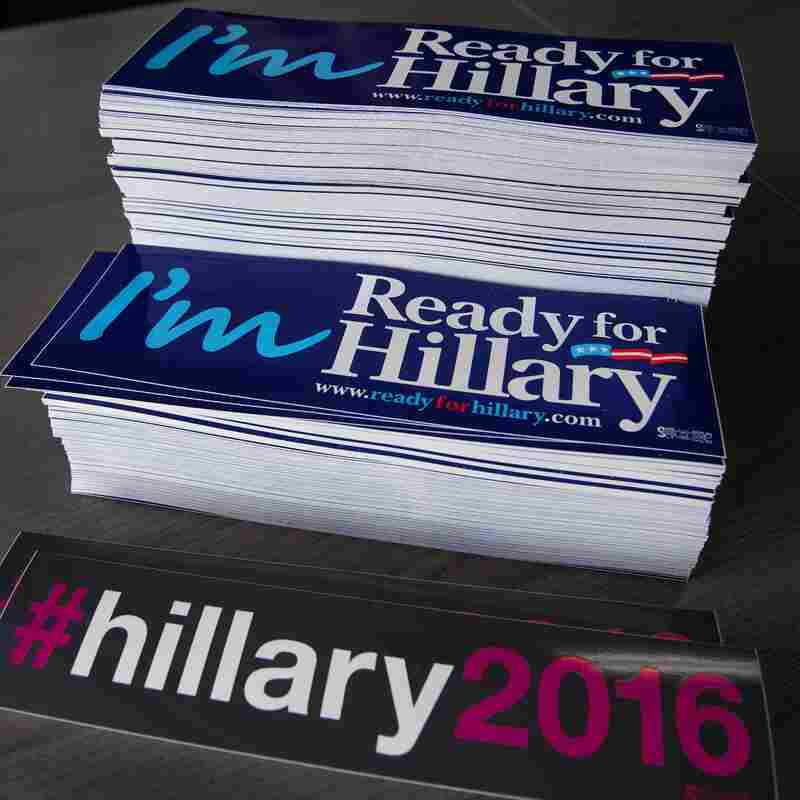 Ready for Hillary and other superPACs supporting Clinton are a sign of how unified and energized Democrats are behind a single candidate. Paul J. Richards/AFP/Getty Images hide caption 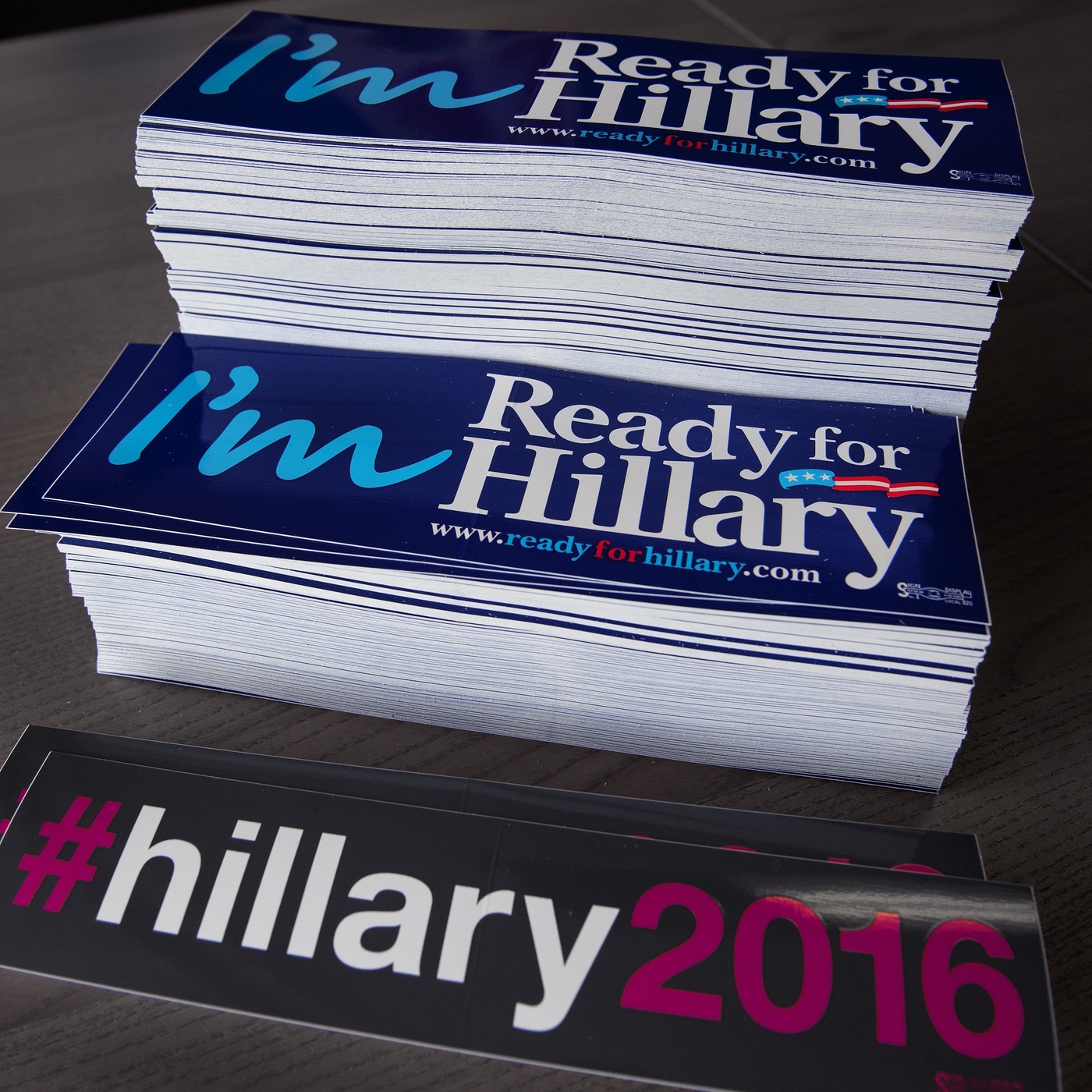 Ready for Hillary and other superPACs supporting Clinton are a sign of how unified and energized Democrats are behind a single candidate.

Last week in Boston, around 100 young professionals paid $20.16 — 2016, get it? — to attend a Ready for Hillary event. Far more important than the minimal money raised were the data collected — tools for future targeting and organizing.

Harold Ickes, an old Clinton consigliere, is an adviser to the superPAC.

"Ready for Hillary started a year ago almost to the day, has raised over $4 million — mostly small donors ... and has over 2 million names of people who have signed up that want to stay in touch," Ickes says. "We have their email addresses, and their Twitter handles and the hashtags and all that that goes along with it. It's quite amazing."

Ready for Hillary is an important piece of the campaign-in-waiting — but only one piece, says Ickes.

"There is Priorities USA, which is a holdover from 2012," he said. "That is a big-money vehicle that, if she runs, will presumably raise very large amounts of money that will be independent spending."

In addition to Ready for Hillary and Priorities, also a superPAC, a group called Correct the Record is doing research and rapid response to support and defend Clinton in the media.

All of these groups demonstrate how smoothly the Obama and Clinton operations have been braided together. Jim Messina, the 2012 Obama campaign manager, is now the co-chairman of Priorities. Mitch Stewart and Jeremy Bird, who ran Obama's vaunted field operation, are advising Ready for Hillary.

Veteran Clinton pollster Geoff Garin says all of this activity, operating independent of Hillary herself, is a reflection of how campaigns have changed.

"There are a lot of entities that are not the campaign proper that have a huge influence on the outcomes of elections," Garin says. "We have seen that infrastructure be deployed in 2012. ... Now that infrastructure is really getting ready to support Hillary Clinton if she decides to run."

It's also a sign of how unified and energized the Democratic Party is behind one candidate — years before the 2016 campaign actually begins. That's unprecedented for anyone other than a sitting president or vice president.

At least organizationally, it means Clinton will be a step ahead of whoever becomes the Republican nominee, says Sara Taylor Fagen, former political director for President George W. Bush.

"It is a great challenge for Republicans," Fagen says. "We don't have it in place. We are not going to have it in place until it is very clear who the nominee is. Those who announce will likely see their supporters put something together on their behalf, something outside, but it won't be as advanced or as well-funded as Hillary Clinton's will have been."

The Republican candidate will also need to be well-funded. The minimum cost of a winning campaign is now considered to be $1 billion.

Of course, none of this activity swirling around Clinton's potential candidacy tells whether she'll be successful. She is the prohibitive front-runner for the Democratic nomination, but she would be a non-incumbent trying to succeed a two-term president of her own party, and that has happened only once since the 1920s. Ford and Truman were both incumbents, trying to get elected after their first terms as non-elected presidents.