Accessibility links
New Yorkers Protest Long Shadows Cast By New Skyscrapers Some New Yorkers are upset about the changing skyline that rims Central Park. They say that as the sun goes behind some of the city's new tall towers, there's a chilling effect to their shadows. 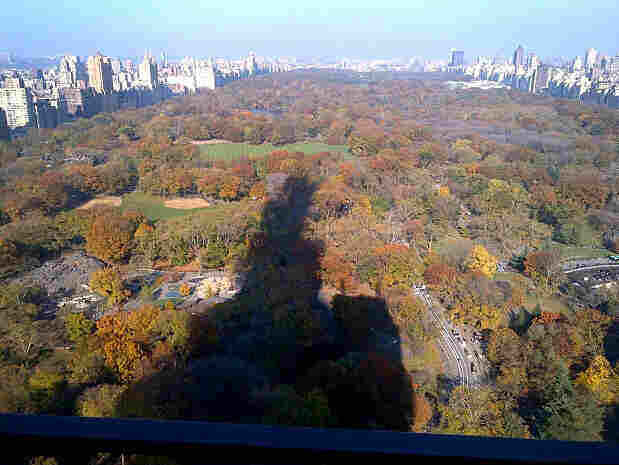 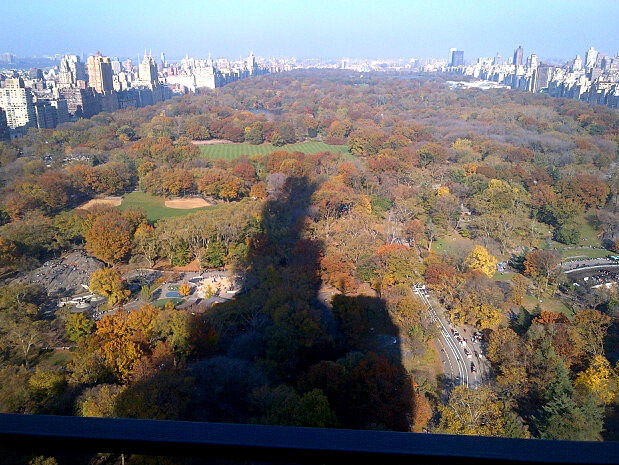 The shadow of One57 looms large over Central Park in New York City.

Skyscrapers are a hallmark of large cities. Modern engineering makes it possible to erect something as tall as the Empire State Building on a very small footprint. Although developers love these buildings, in New York — the city of skyscrapers — residents have been upset at the shadows they cast over public spaces like Central Park.

Journalist Warren St. John first noticed the shadows when he took his daughter to a playground near Central Park's southern border on sunny, blue-skied fall day. All of a sudden, though, it became chilly. He remembers the parents zipped up their kids' jackets and hurried off. He looked up, "and that's when I realized the sun was behind this new building I'd never paid much attention to," St. John says. "But what really got me was that about six months later, I was at a playground a mile north of here and the exact same thing happened. I looked up, and it was the same building."

On a recent afternoon, St. John again gets caught in the chill in the shadow of another tall, thin building still under construction. It's One57, the tallest building south of the park. And, he says, "it will soon be dwarfed by another building, 30 percent taller." As the sun goes behind the tower, St. John notes, "it's a little chillier."

At a community meeting held to address the rise of supertowers and the reach of their shadows into the park, City Councilman Corey Johnson said that most of these apartments "are being sold to foreign investors, who have tens, if not hundreds of millions of dollars, who are not making this their primary home."

Extell Development, the developer of One57, braved the hostile audience at the community meeting.

"The shadows cast by tall, slender buildings, which is what most of the buildings going up are, are very brief — maybe they're 10 minutes in any one place — and cause no negative effect on the flora or fauna of the park," said Gary Barnett, president of Extell Development. What's more, Barnett says, the buildings are creating many permanent jobs in retail, hospitality and construction. "And these are not minimum-wage jobs," Barnett says. "Many of the union construction jobs compensate between $100,000 and $200,000 a year. Upon salaries like this our fellow New Yorkers can build a better life."

St. John responds that each of these buildings might have 100 apartments, but 40 million people use the park. To wit, in the shadow of One57, he points to a row of empty benches in the shade. "Nobody is sitting on these benches, but over there where the sun is, people are sitting," he says. "They're having a snack."

Moving on to another area of Central Park, older buildings throw shorter shadows right next an open area filled with constant sunlight. He points to buds on the trees in the sunlit area, "but if you look just to the trees beyond them, there are no buds on those trees because that is where the shadows begin to fall from these buildings."

If it was just that one building, St. John says, you could kind of shrug it off. But he ticks off six or seven buildings that are going up right in this area. Central Park is landmarked and protected from development, but there is nothing to protect it from shadows cast by buildings outside the park.

Landscape architect Michael Van Valkenburgh designed the tiny teardrop park near the World Trade Center. Surrounded by tall buildings, he wondered, would there be enough sunlight for a lawn? "Sunlight is the joy of what a park is," he says. 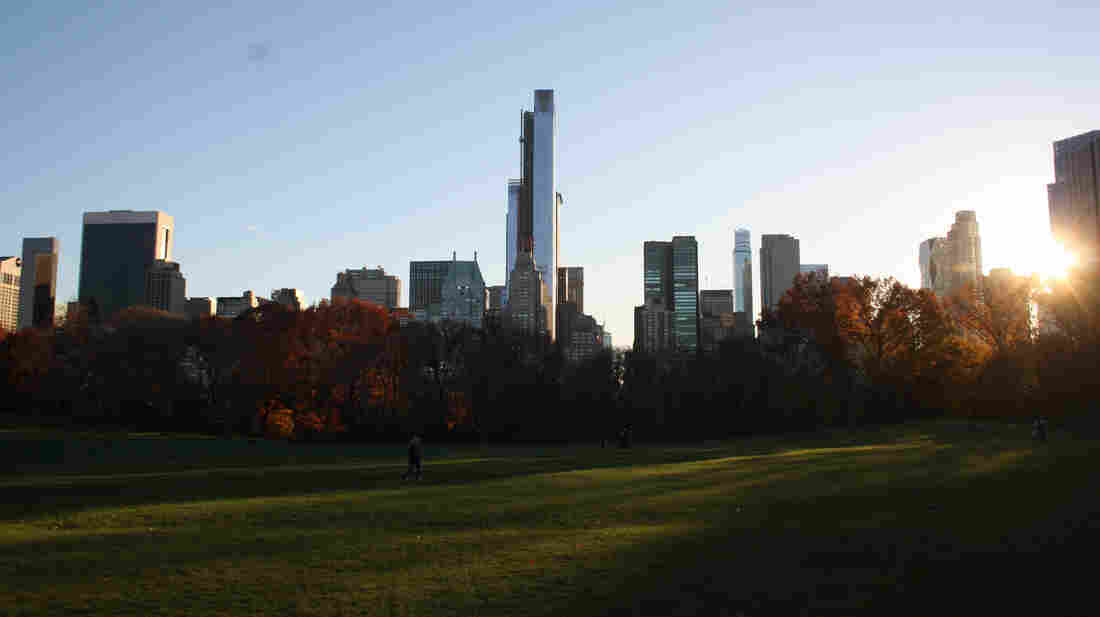 One57 is a residential skyscraper under construction in Midtown Manhattan. At the moment it is the city's tallest residential building. Christina Horsten/DPA/Landov hide caption 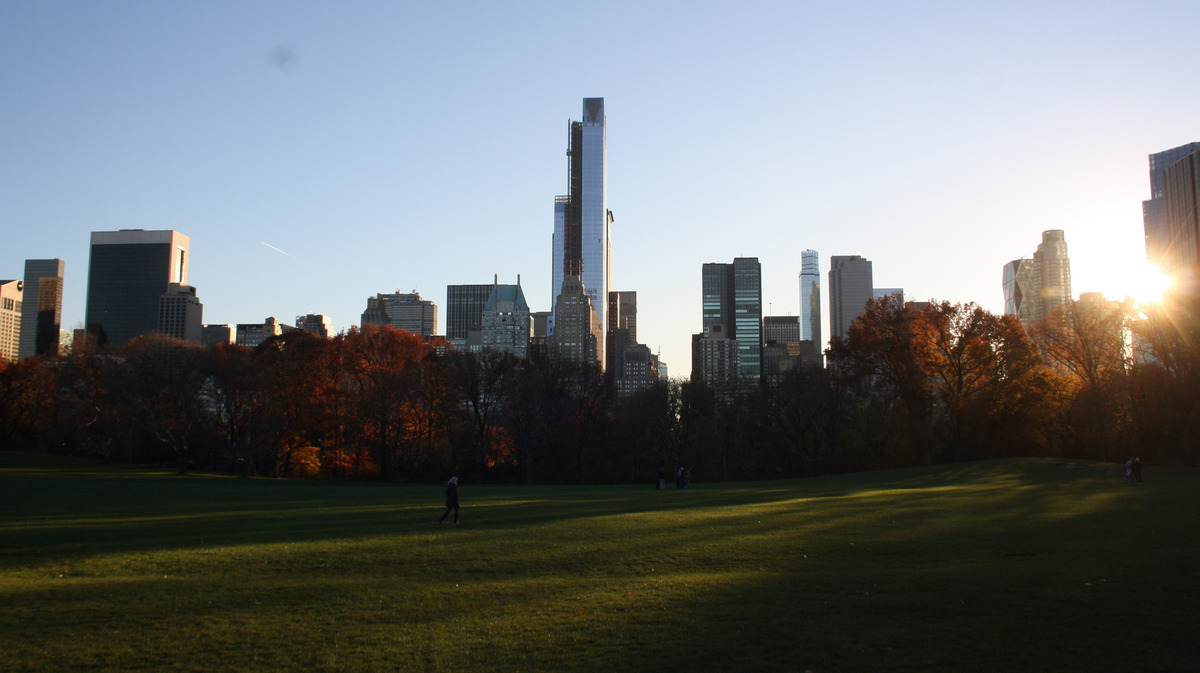 One57 is a residential skyscraper under construction in Midtown Manhattan. At the moment it is the city's tallest residential building.

Experts analyzed how much sunlight would be necessary, and one of the architects actually lowered part of a building under construction "so enough sunlight came in," Van Valkenburgh says. "But everything was within inches of not working."

As to whether the shadows will stress trees and plants, he says, they will probably die slowly — over five years. " 'Oh, why are the trees dying?' " he predicts people will say. " 'It must be related to global warming.' "

Van Valkenburgh believes there should be rules in New York about the right to sunlight in public spaces as there are in the zoning laws of some other communities.

As for St. John, he's peeved that there was never any public debate about the supertowers. They just happened. "Maybe at the end of that public debate the public consensus might have been the economic activity generated by these buildings makes it worth it, but we just never had the debate," St. John says.

And at least for these buildings it's probably too late.