Accessibility links
As Shakespeare Turns 450, 'Hamlet' Tour Makes The World A Stage Shakespeare's Globe Theater aims to take the Bard's iconic play to every country in the world. It will perform everywhere from prestigious theaters to Pacific island beaches. 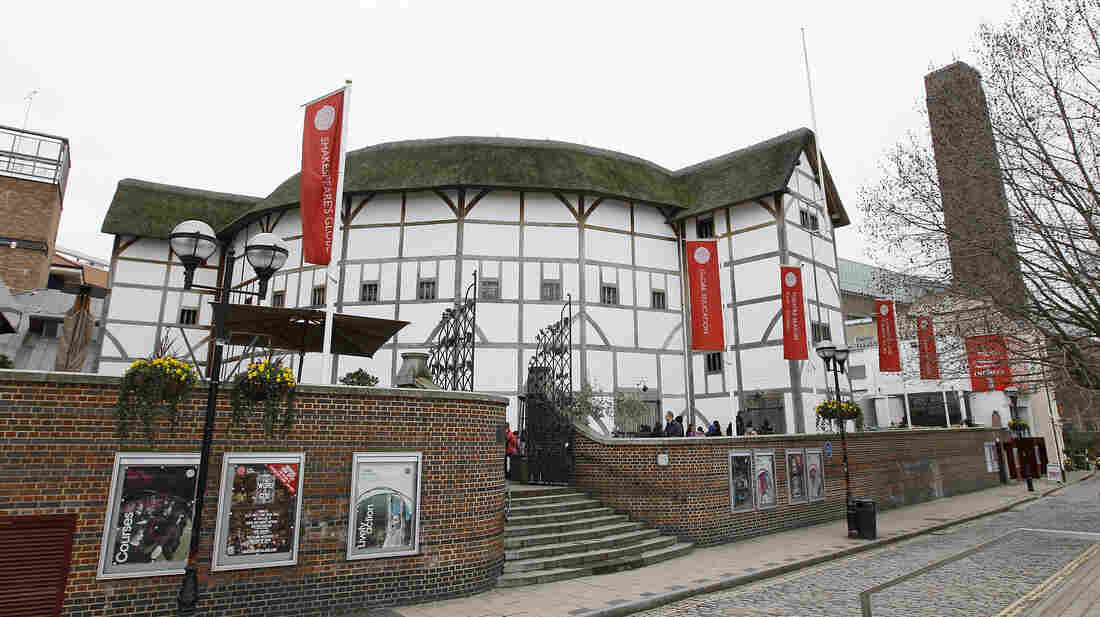 The theater troupe is kicking off its Hamlet tour with three performances at Shakespeare's Globe Theater in London. Alastair Grant/AP hide caption

No one knows the exact date of William Shakespeare's birth, but devotees have adopted April 23 as the day to celebrate — and this year, the man from Stratford turns 450.

Shakespeare's Globe Theater — a re-creation of the theater that hosted most of his plays — is marking the occasion with an ambitious world tour of Hamlet, the Bard's most iconic play, which the troupe plans to perform in every country in the world. Shakespeare's Globe Artistic Director Dominic Dromgoole tells NPR's Renee Montagne that the tour is a bold, stupid idea.

"And the great thing about bold and stupid ideas," he says, "is that people understand them very swiftly. So when we go out to people around the world and say, very simply, 'We are taking Hamlet to every country in the world,' they immediately get the fun of it and the ambition of it."

On thinking of Hamlet as a genius, rather than a tortured soul

One of the most revealing things I ever saw about it was there's a wonderful bit of old television with Peter O'Toole and Orson Welles drinking whiskey and smoking cigarettes and sort of arguing and being naughty and childish talking about Hamlet. And it's brilliant, but Orson Welles says something that I think is massively telling, which is: The important thing to remember about Hamlet is he's a genius.

Lear is an old dictator; Othello is a Moor in a white man's world. They all have those particular facets. Hamlet is just this sort of crazy genius of language and thought. And you have to play that energy and you have to understand very clearly who Hamlet was before the roof fell in on his head — before his father died and his uncle married his mother. And everything we know about him before that from his friends and his lover, Ophelia, is he was rather brilliant and spirited and beautiful.

Shakespeare's Accent: How Did The Bard Really Sound?

And so, often in contemporary versions of Hamlet, he's so tortured and angsty and pained that — as well as being profoundly irritated by him for the whole evening because he's just so self-indulgent in his own grief — I think that skews the play away from itself. I don't think the play is meant to be about somebody who is in love with his own pain.

On punching up the play's physicality for non-English speakers

We're very aware of what Shakespeare wrote for and why Shakespeare wrote. And you have to be aware that these plays, especially Hamlet, were touring 400 years ago to countries that didn't speak English. Hamlet was played in a boat off the coast of Yemen in 1608. The company also toured it through what's now Holland, northern Germany, all the way to Poland. And so when they played it there they did a shortened version; they did a version with an emphasis on physicality; they did a slightly coarser, cruder, bolder version in sort of primary colors. We're not going that coarse or crude, but we certainly are aware that these plays were written to tour as well as to play for the globe. And so, you know, we want to reflect some of that spirit.

On the touring set's adaptability

On taking the tour to politically unstable countries

We monitor as many different situations as we can very closely. I think that when we get into [the] Central African Republic, we're probably going to be working very closely with NGOs and with organizations that are there working in refugee camps, and that might be our best way ... of getting in there and putting the play in that sort of environment.

We're going to Kiev and we're playing there the night before their elections, in about four or five weeks' time, and we're hugely looking forward to that, you know. We're excited. That's the sort of place where theater matters and is important.

On what makes Hamlet universally relatable

Hamlet says that time is out of joint. Hamlet is restless, dissatisfied, out of place in his own world. His sensibility is different from the world around him. And he's become an iconic figure for anyone who feels that they are out of place in their own world. You know, in England it still speaks to people who are restless and dissatisfied with the world they're in, and hopefully it will speak in the same way to people anywhere.