Accessibility links
Household Words: Shakespeare's Enduring Lexicon What hath the Bard wrought? A legacy of words and idioms you'll recognize from pop culture and even your own speech. On the occasion of his 450th birthday, Ask Me Another presents this handy glossary. 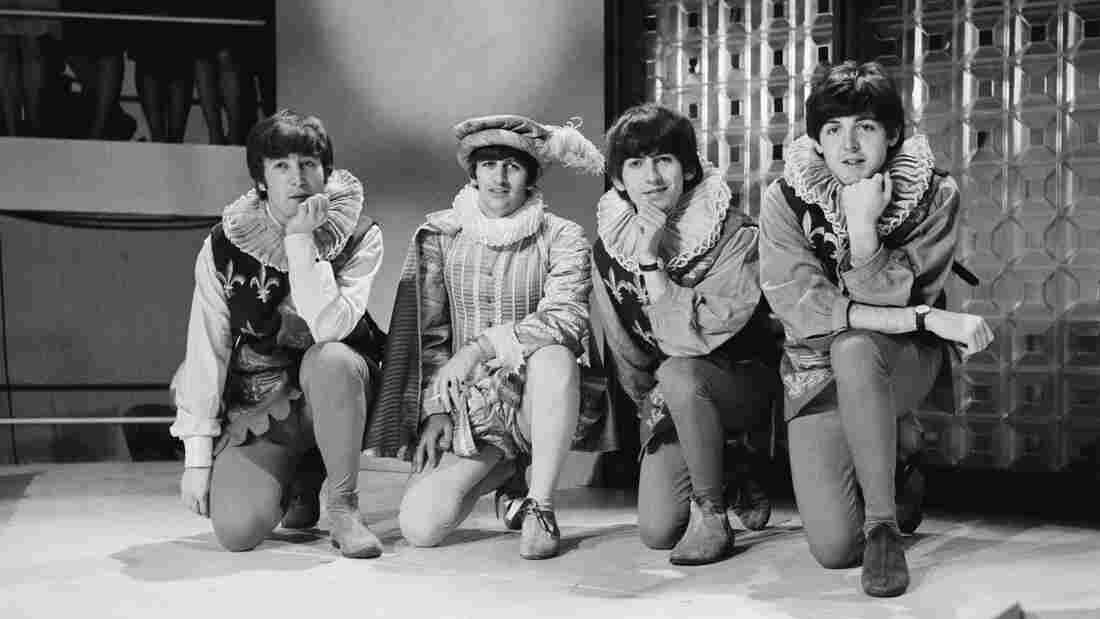 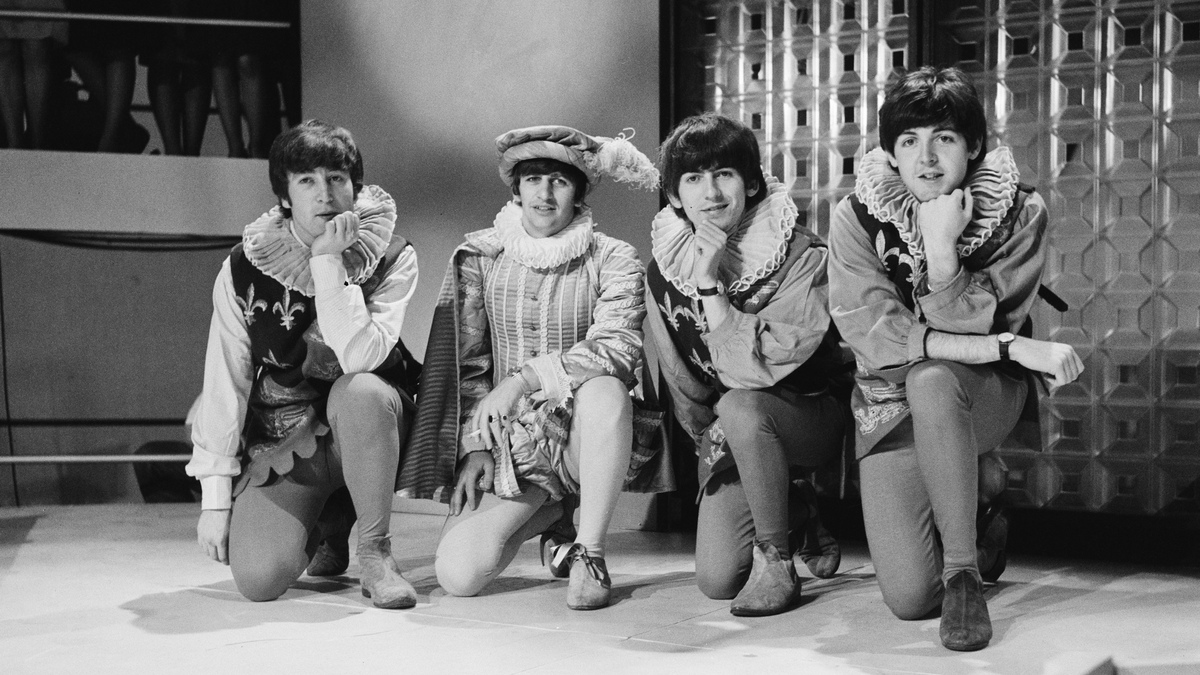 In 1964, for Shakespeare's 400th birthday, The Beatles performed an excerpt from A Midsummer Night's Dream.

What hath the Bard wrought? William Shakespeare was a word nerd if we ever saw one, and he's left a legacy of terms and idioms that have since diffused throughout pop culture, writing and colloquial speech. You've probably been quoting language Shakespeare helped popularize ("eyeball," "lonely," "gossip"), without even knowing it. Though some phrases may have lost their Shakespearean "sound," or are devoid of their original contexts, it's hard to overstate his profound influence on the way we speak to one another in the 21st century.

On the occasion of his 450th birthday, Ask Me Another presents this handy glossary of everyday words and phrases commonly attributed to him. (It's difficult to prove whether Shakespeare was the first to use these words, or just the first to commit them to text.) Go forth and quote* him with confidence — there's a good chance you already are.

*("Misquote," though an obscure use of the word, is also credited to Shakespeare in Henry IV, Part I.)

bedazzle: "Pardon, old father, my mistaking eyes, / That have been so bedazzled with the sun / That everything I look on seemeth green." (The Taming of the Shrew, IV.v.56-58)

Hearing this word today may evoke nostalgia for the '70s-era machine that stapled rhinestones to your clothes. 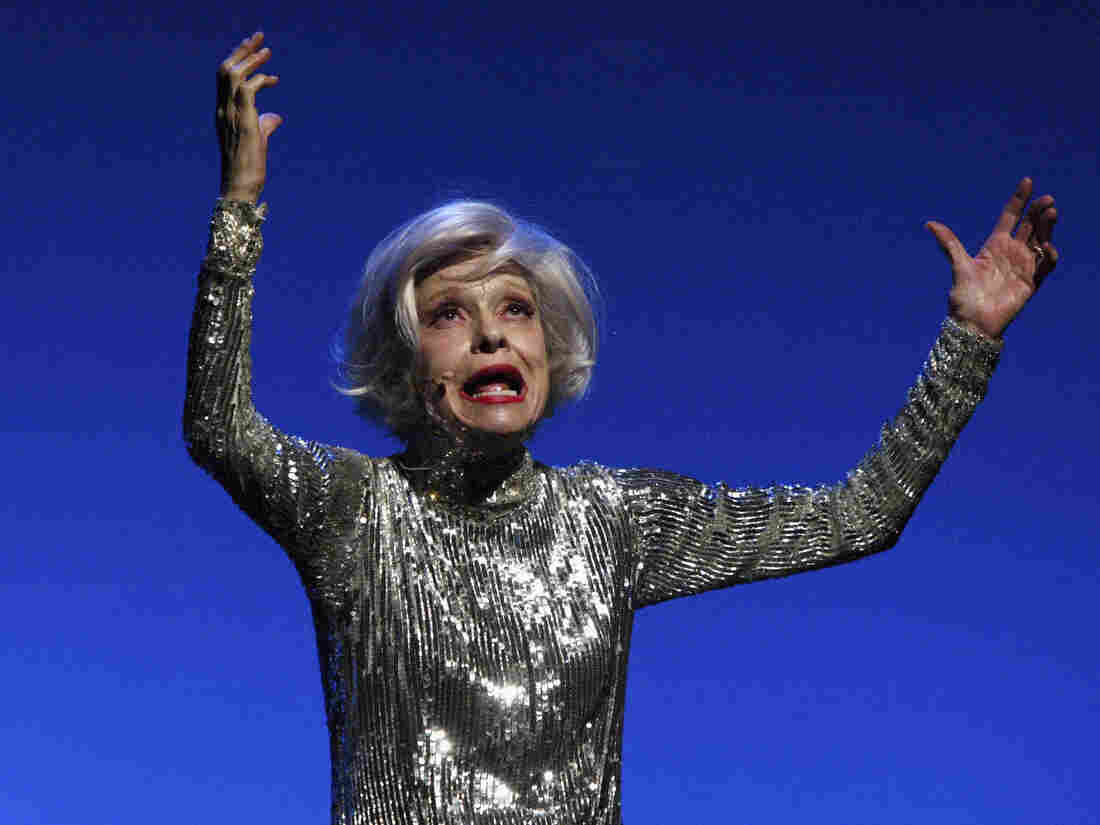 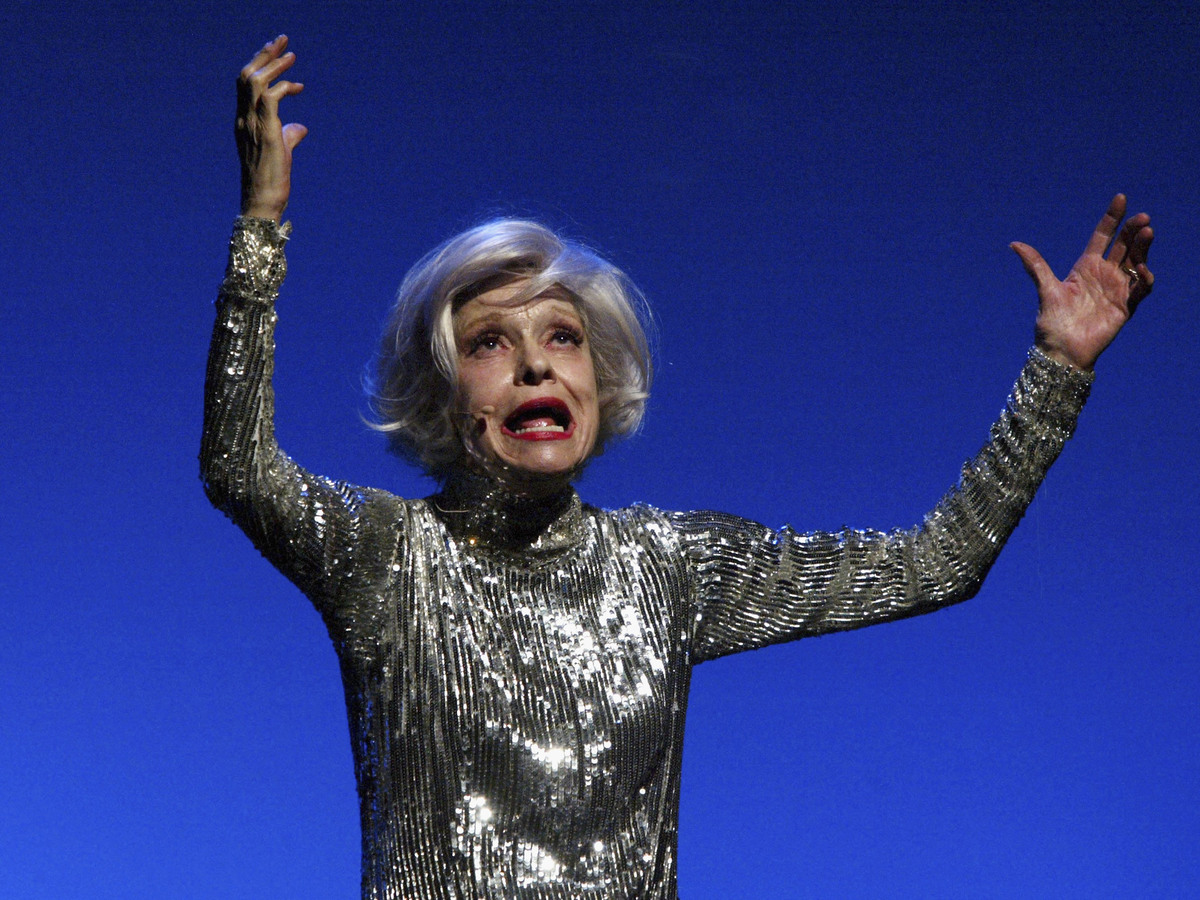 This is in the sense of "without emotion or excitement, unimpassioned, cool" and specifically related to people. Cold-blooded in the biological sense was used and recorded in the Oxford English Dictionary earlier.

Is it any wonder that Shakespeare was also the first to use hot-blooded? "Now the hot-bloodied-Gods assist me." (Merry Wives of Windsor, V.v.2)

critical: "That is some Satire keene and criticall" (A Midsummer Night's Dream, V.i.54)

cruel to be kind: "I will bestow him and will answer well / The death I gave him. So again good night. / I must be cruel only to be kind. / This bad begins and worse remains behind." (Hamlet, III.iv.176-179)

In his book Brush Up Your Shakespeare!, Michael Macrone writes:

[Hamlet] has spent the better part of the scene upbraiding [his mother] for indulging her new husband, King Claudius, whom Hamlet compares to a "mildewèd ear." He must be cruel to his mother, he explains, only to be kind to her — to save her from lapsing any further into sensuality and betrayal of her dead husband.

The sentiment that "harsh medicine may effect the best cure" has endured, especially in realms that deal acutely with matters of the heart: pop music.

fashionable: "For time is like a fashionable host, / That slightly shakes his parting guest by th' hand" (Troilus and Cressida, III.iii.159-60)

See also a reference to "fashion-monging boys" in Much Ado About Nothing (V.i.95) as possible dandies. Shakespeare's "fashionable" refers specifically to people. 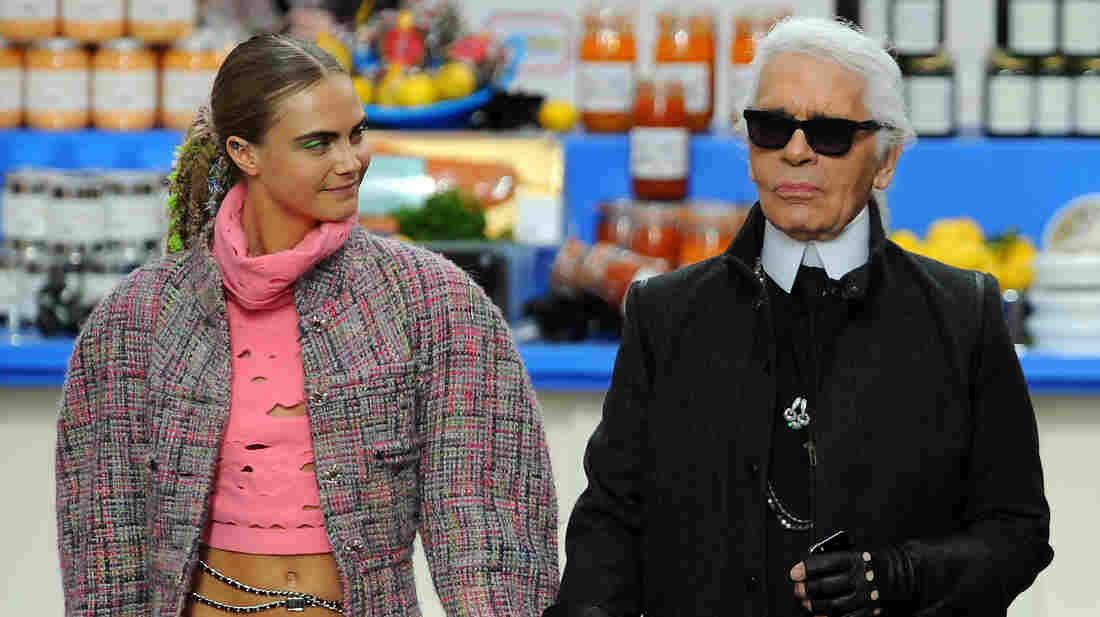 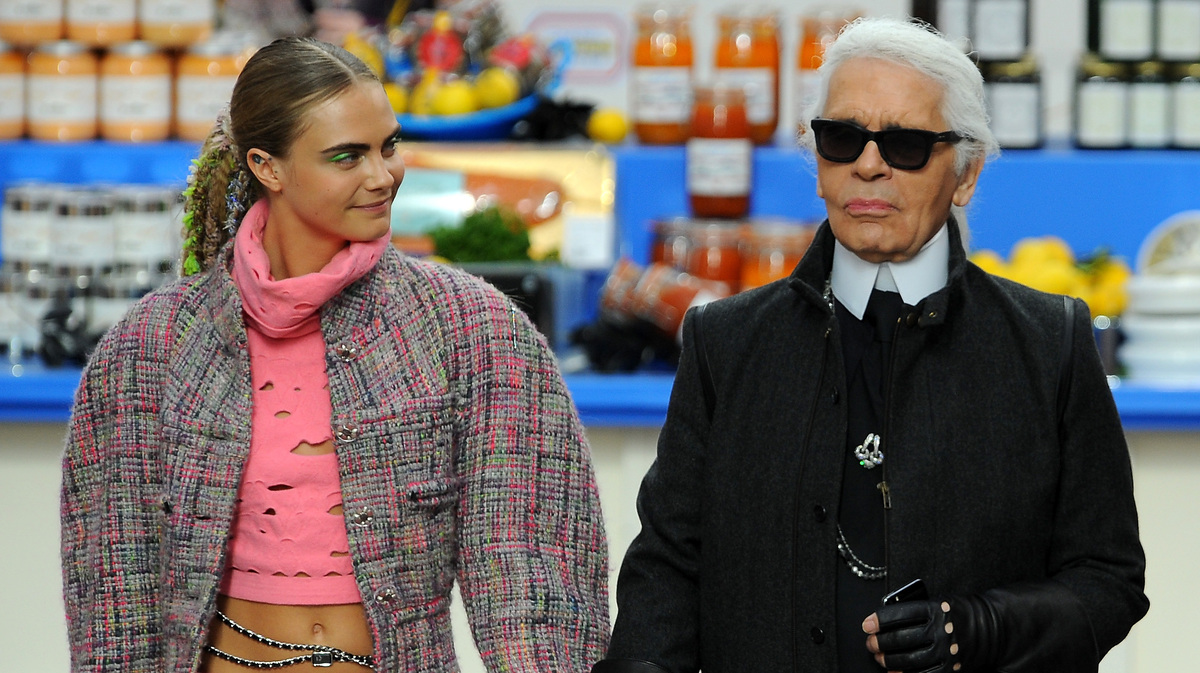 for goodness' sake: "For goodness' sake, consider what you do, / How you may hurt yourself — ay, utterly / Grow from the King's acquaintance, by this carriage." (Henry VIII, III.i.159-161)

Shakespeare is credited (along with his collaborator John Fletcher) with being the first to use it in the sense of "in various exclamatory phrases, in which the original reference was to the goodness of God." (OED)

gloomy: "Ravished and wronged, as Philomela was, / Forced in the ruthless, vast, and gloomy woods?" (Titus Andronicus, IV.i.52-53)

Whenever you complain about gloomy weather, remember that Shakespeare did it first.

gossip: "And sometime lurk I in a gossip's bowl / In very likeness of a roasted crab / And when she drinks, against her lips I bob / And on her withered dewlap pout the ale." (A Midsummer Night's Dream, II.i.47-50)

According to the Oxford English Dictionary, Shakespeare's usage of "gossip" was very specific: "a woman's female friends invited to be present at a birth." 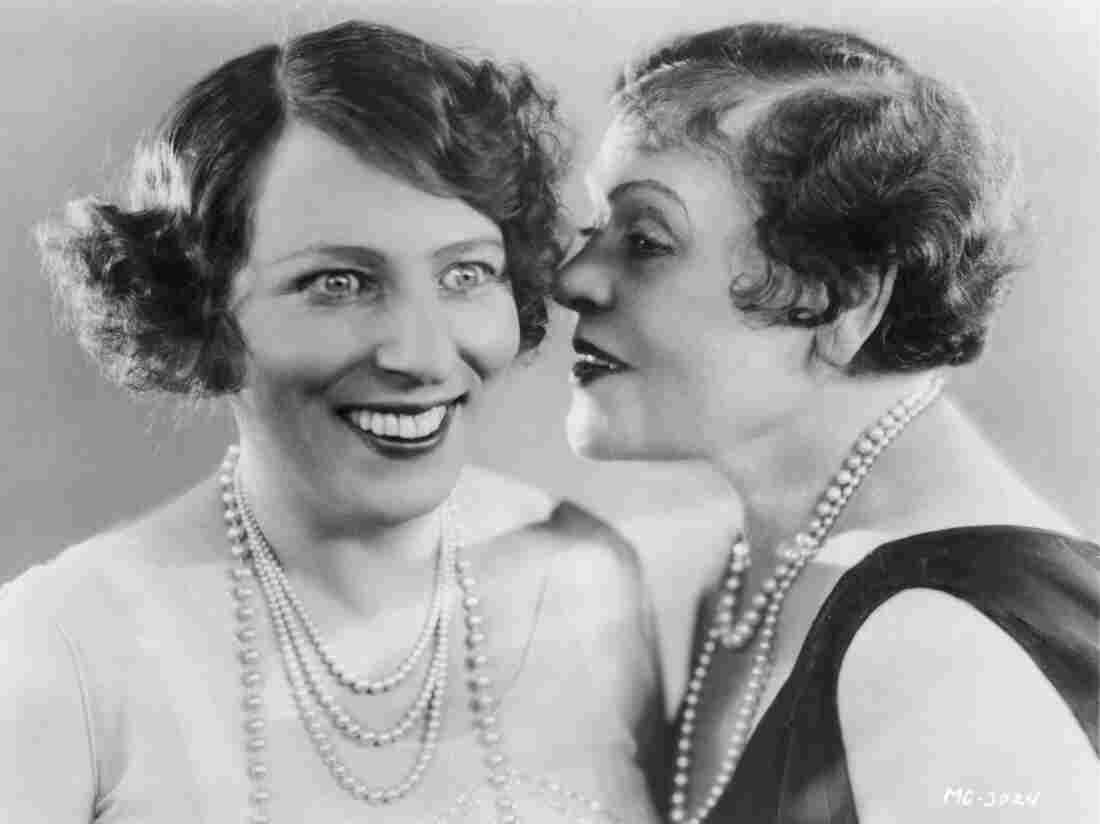 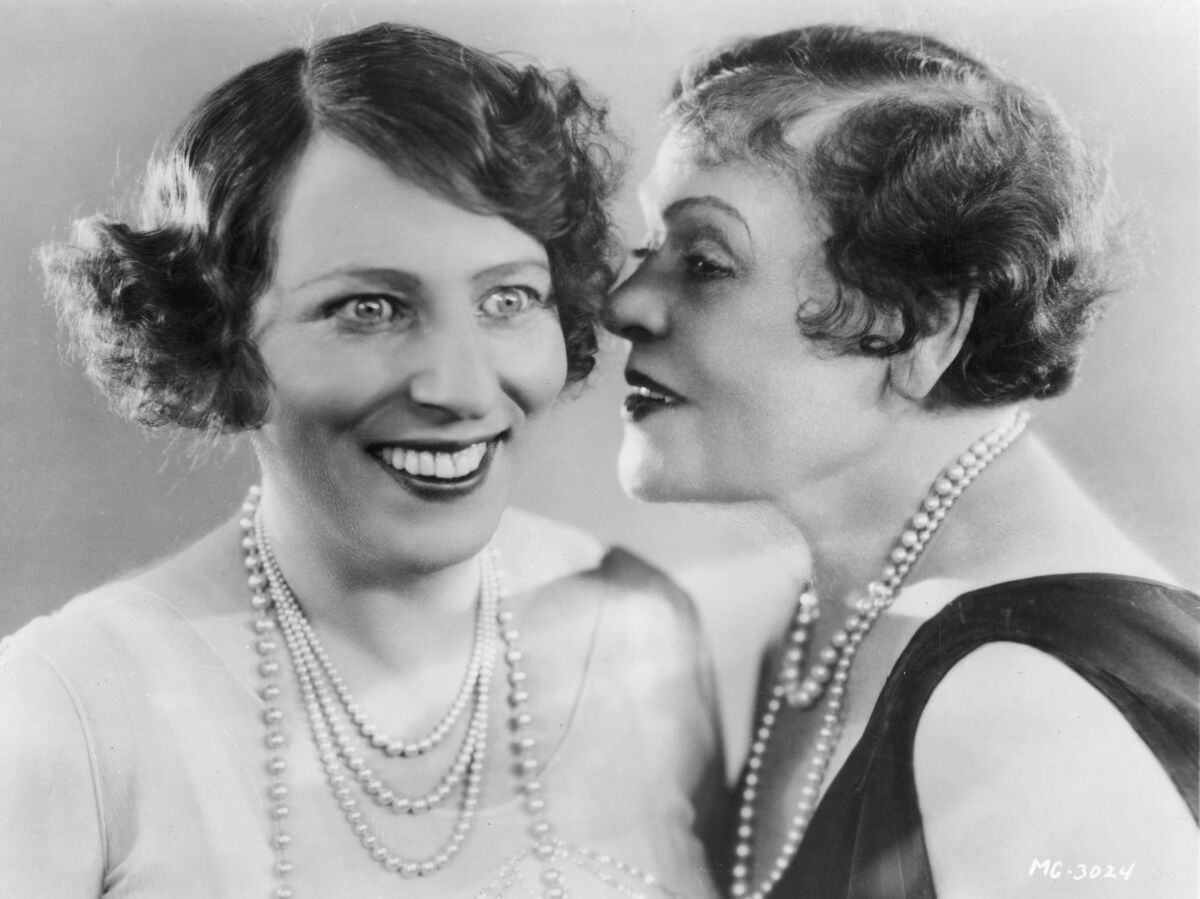 Gossip: from vaudevillian Polly Moran (right) to Missy Elliott, to Mean Girls, and beyond.

Iago, not one prone to betraying his true feelings or motives, views the idea of exposing one's emotions so candidly as a sign of weakness. The phrase has prevailed as an expression for the expressive, from Ringo Starr to Lil Wayne: "Excuse my French emotion and my passion / But I wear my heart on my sleeve like it's the new fashion."

This is in the sense of "regarded with contempt" and is now obscure, though the current concept of "jaded" is someone who is bored or has seen it all.

Orange you glad we didn't say interrupting cow? Apparently we can blame Shakespeare for helping (however inadvertently) to launch the hacky joke.

laughable: "Theyle not shew their teeth in way of smile / Though Nestor sweare the jest be laughable" (The Merchant of Venice, I.i.55-56)

Dragons aside, notable loneliness is found in the music of Elvis, Bobby Vinton (by way of Akon), The Beatles, Yes, Naughty by Nature, Roy Orbison, and so, so many more.

method in the madness:

HAMLET: For yourself, sir, shall grow old as I am, if like a crab you could go backward.

POLONIUS: [Aside] Though this be madness, yet there is method in't. (Hamlet, II.ii.206)

Others with methods in the madness: The Bee Gees, Bones, serial killers, method actors who also enjoy puns.

In the past 40 or so years, the phrase has evolved such that "method in" has given way to "method to," though both are still used.

We no longer use this phrase to describe birds or murder per se, as Macduff did, but rather when something happens all at once. 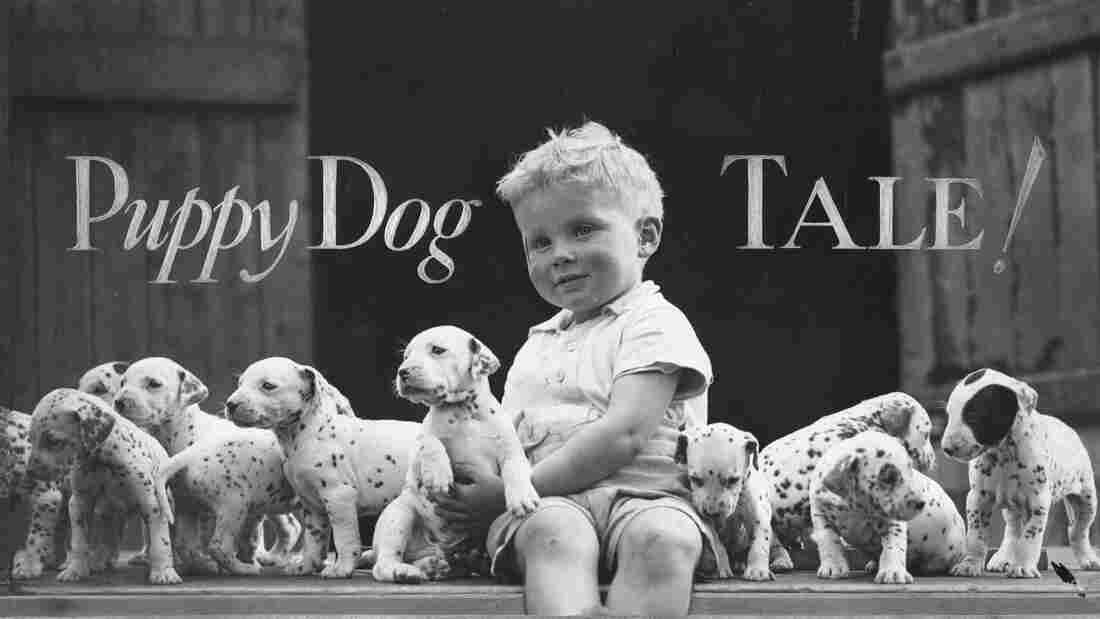 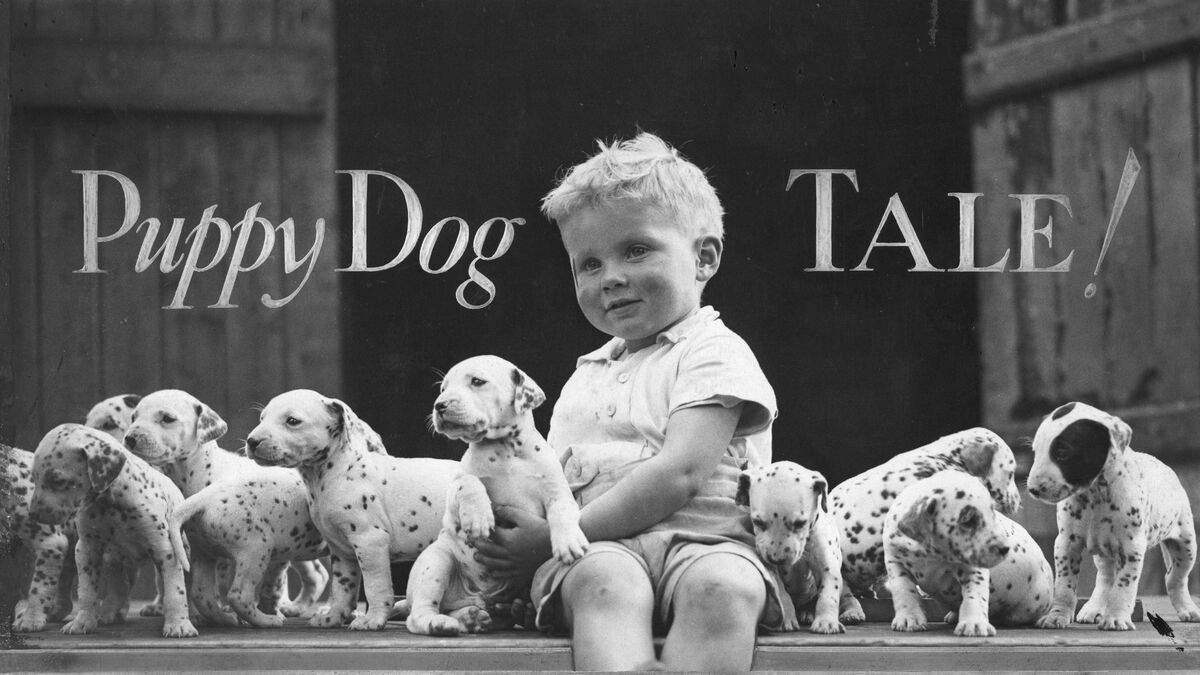 Phil Collins: a fan of reverb.

By "salad days" Cleopatra refers to a time not when she had to eat salad, but when she was like salad. From the fifteenth century on, "salad" could mean any raw vegetable; metaphorically, the young Cleopatra was as "green" (inexperienced) and "cold" (passionless) as a piece of lettuce. At least, this is how she now explains her youthful affair with Julius Caesar ... she portrays her "salad days" as a time of unreflective indulgence.

More recently, "salad days" has been: a musical, an episode of Monty Python's Flying Circus, in music by Procol Harum, Minor Threat, Mac DeMarco (and more), and quoted by Nicolas Cage in the Coen brothers' film Raising Arizona.

skim milk: "I could divide myself, and go to buffets, for moving such a dish of skim milk with so honourable an action!" (Henry IV, Part I, II.iv.32) 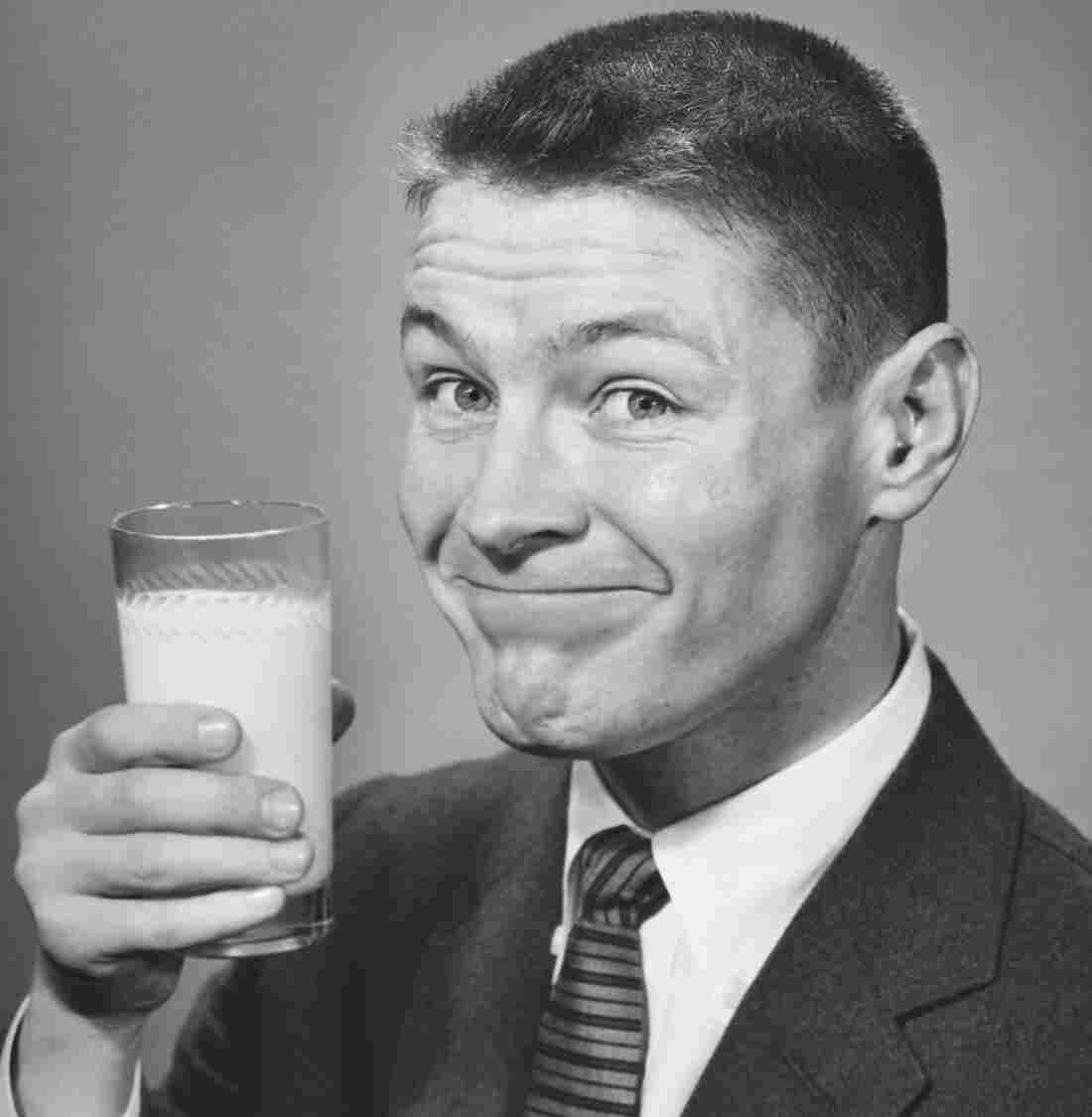 swagger: "What hempen homespun's have we swaggring here, / So neere the Cradle of the Fairy Queene?" (A Midsummer Night's Dream, III.i.71-72)

NPR's Code Switch recently traced the origins and usage of "swagger" (and its shortened form, "swag") from Puck to Jay Z, who claims, in the song "Otis," to have invented this embodiment of braggadocio. In 2011, All Things Considered deemed "swag" "Hip-Hop's Word of the Year."

In Shakespeare's English, this phrase is especially amazing. 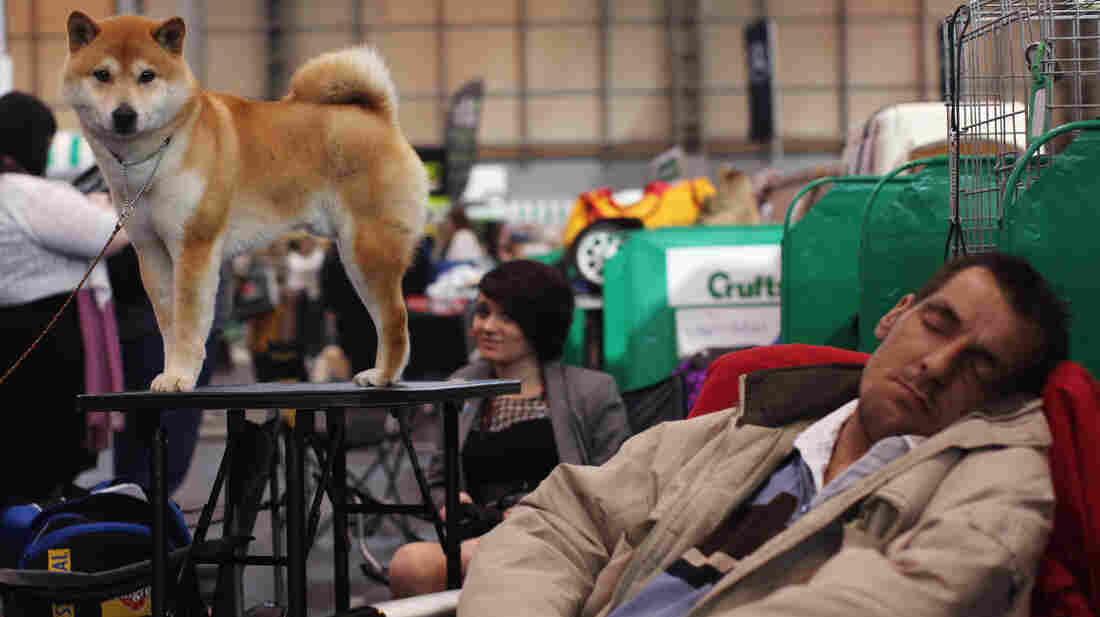 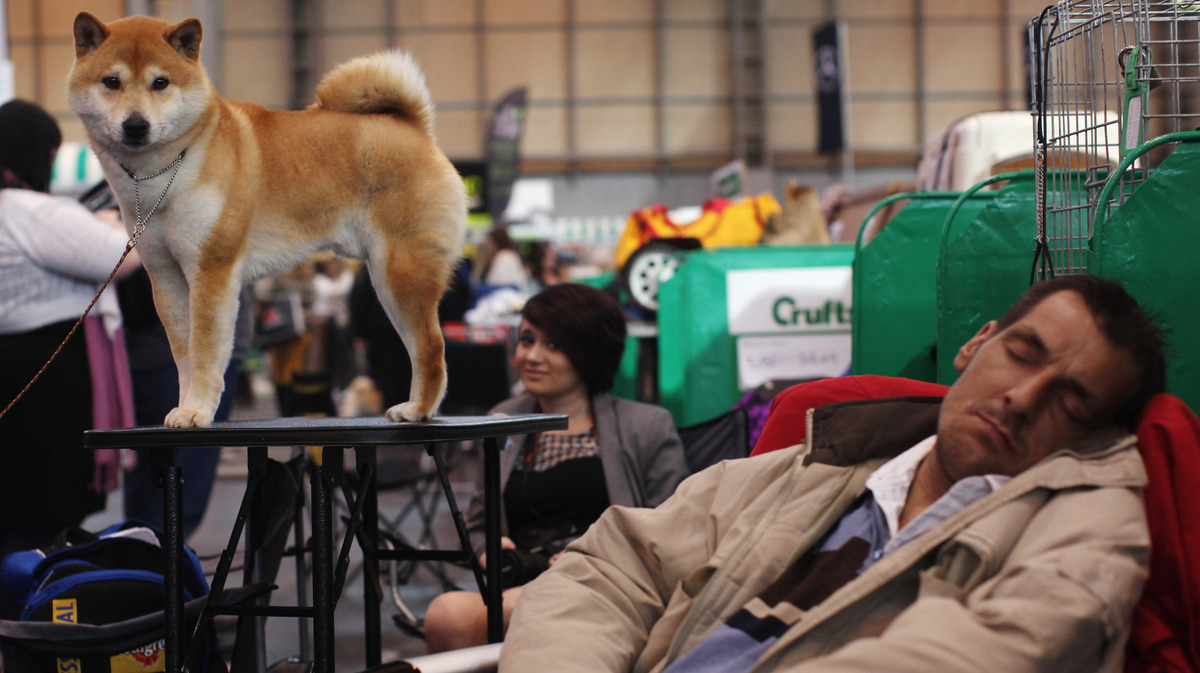 what the dickens: "I cannot tell what the dickens his name is my husband had him of. What do you call your knight's name, sirrah?" (The Merry Wives of Windsor, III.ii.19-20)

This one is a little muddy, as Thomas Heywood, another playwright, may have beaten Shakespeare to the punch. But it's a fun and interesting phrase, regardless.

"Dickens," in this instance, refers not to the A Tale of Two Cities author, but rather to the devil himself. Marcone points out that substituting a euphemism for "What the devil!" such as "dickens" or "deuce" "almost certainly lies in the sound and in the comic effect of the substitution itself."

Speaking of comic effect, we may have Family Guy to blame for "what the deuce" overtaking "what the dickens" as a common expression.

"Fishify," ["O flesh flesh how art thou fishified" (Romeo and Juliet, II.iv.36)] wonderful as it may be, hasn't really stuck around in modern language. A Google ngram search suggests it's one of many hilariously odd words (see also: spleenful, lustihood) that couldn't wriggle far enough away from their original contexts.

Sources: Oxford English Dictionary; Brush Up Your Shakespeare! by Michael Macrone. Special thanks to Peter G. Platt, chair of the Department of English at Barnard College.