Accessibility links
'The Other Woman': When Terrible Movies Happen To Funny Actresses A film that seems designed to demonstrate the dire circumstances in which funny women can still find themselves, The Other Woman is a grotesque pantomime of female empowerment.

'The Other Woman': When Terrible Movies Happen To Funny Actresses

'The Other Woman': When Terrible Movies Happen To Funny Actresses 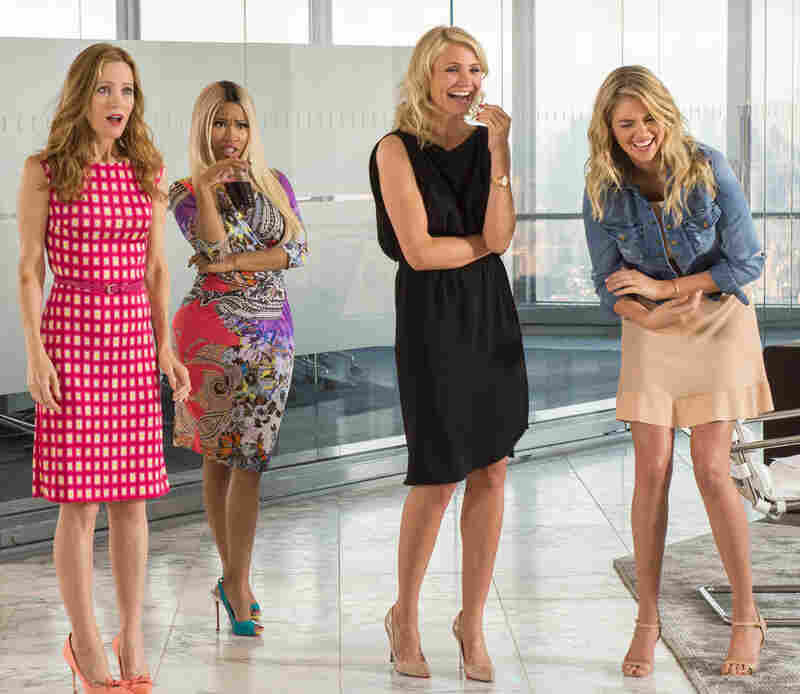 Leslie Mann, Nicki Minaj, Cameron Diaz and Kate Upton have nothing to do in The Other Woman. Barry Wetcher/Twentieth Century Fox hide caption 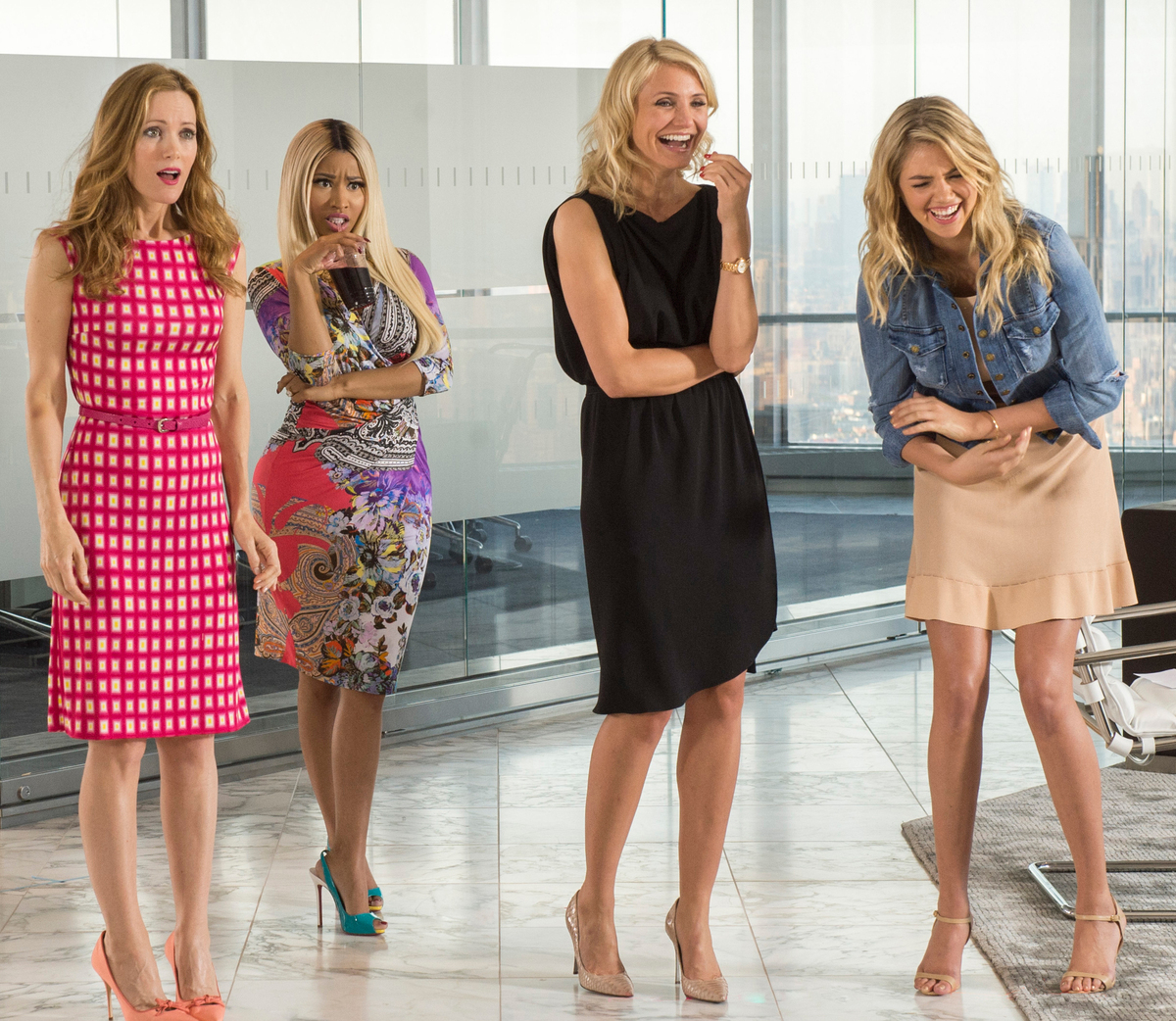 Leslie Mann, Nicki Minaj, Cameron Diaz and Kate Upton have nothing to do in The Other Woman.

There is a moment in The Other Woman in which Leslie Mann and Cameron Diaz, playing a wife and her husband's former mistress — now friends — fall into a hedge together. When they're spotted, there's a little bit of physical business that's legitimately funny. If you can ignore the fact that the moments of this kind scattered through the film are decorating such a conceptually odious, stupid-to-the-bone enterprise, some of them may make you laugh.

But it may also occur to you just how bad — how bad — it is that this is what we have to offer Mann and Diaz, who show themselves in these moments to be really able comic actresses: a story in which they play idiots with no interests of any kind except bickering over an utterly charmless man and then satisfying themselves that giving him explosive diarrhea and prominent nipples constitutes satisfying revenge for his having apparently robbed both of them of whatever souls and outside interests they once possessed.

It is the most grotesque pantomime of girl power, these beautiful women clinking glasses and ultimately trading what must be the weakest and least earned high-five in cinema history after executing a plot made possible by one of their daddies and done with considerably more panache in the painfully generic but at least mildly agreeable 1987 Michael J. Fox film The Secret of My Success.

When we first meet them, both Kate (Mann) and Carly (Diaz) believe they are happy women, because they are both under the spell, such as it is, of Mark (Nikolaj Coster-Waldau), a man with all the inscrutable charisma of a tennis ball with a face drawn on it. Kate babbles at him and pees in front of him and doesn't know she should groom her intimate areas, because that's how wives are, right? Carly has wine with him at sundown and has lots of impetuous sex with him and talks to her secretary (Nicki Minaj) about him, because that's how lady lawyer mistresses are, right?

(As a side note, while the need to advertise the themes of competitive pettiness is understandable, it seems like a dreadful missed opportunity that they didn't call this Right, Fellas?: The Movie. Someone in marketing was not keeping his [probably his] eye on the ball.)

The women discover each other, at which point the cold one (the one who works in an office) is mercilessly stalked by the baffled, out-of-touch, nerdy, sexless one (the wife), until they become friends and eventually discover the young, large-breasted, dumb one — the other mistress, Amber, played by supermodel Kate Upton. At first, the two women over 40 naturally respond to the beautiful woman in her 20s by attempting to physically attack her out of jealousy (right, fellas?), but particularly once they learn that Amber is so stupid she doesn't know which end of a pair of binoculars to look through, all three team up because they hate Mark, and what better animating principle is there for female friendship than being humiliated by the same man and having nothing better to do than feel miserable about it?

Now granted, all three of these women will ultimately need rescue from men in order to move on to the next phases of their lives — and again, they wouldn't know what to do to Mark without advice they receive from Carly's father (Don Johnson), which he delivers over a meal in a restaurant where Asian women give massages while you eat and feed you by hand. But don't let that harsh your "sisters are doing it for themselves" mellow, ladies. HERE'S TO FRIENDSHIP!

It is a film that features a vomiting scene, a farting scene, a huge dog taking an extravagant, full-view dump on an apartment floor, the aforementioned diarrhea and nipple segments, a joke — the approach of which is visible from space — when a man is sexually humiliated by a transgender woman, and plenty of appreciative ogling of Kate Upton's caboose.

It does not, however, manage to pass the Bechdel test, the laughably low bar that asks these questions: (1) Does a film have two women in it? (2) Do they talk to each other? (3) About something other than a man?

Yyyyyyyup. That's right. The Other Woman is 109 minutes long, and at no time do any of these women — including Carly and her secretary, who only know each other from work -- pause for a discussion, even for a moment, of anything other than a series of dudes: Mark, Kate's brother, Carly's father, the secretary's husband, Carly's other boyfriends. It is truly, no fooling, all they talk about for 109 minutes.

As has often been observed, there is nothing about the Bechdel test that is magical: plenty of good movies don't pass it, and heaven knows plenty of terrible movies do. But the fact that a large studio like Twentieth Century Fox — not to mention an actual nonjoke director like Nick Cassavetes — can make an ode to female empowerment that at no time involves any women relating to each other about anything other than men?

It's deliciously, almost poetically, perhaps polemically depressing. The Other Woman is no charming film about lady buddies, the way they'd like it to be, but it is a gift-wrapped boon to critics who have been looking for an opportunity to explain the miserable circumstances in which genuinely talented comic actresses — even powerful ones, even proven ones, even ones doing the absolute best they possibly can — still very often find themselves.

There are isolated funny moments: That's just the truth. Mann is a gloriously, unabashedly weird presence in the best way, always, and Diaz continues to be an often funny mix of glamorous and goofy, just like she's been since she was a young actress-model herself. The audience I was with laughed at this movie sometimes. They looked at it — twice — and said, literally, "This [excrement] is funny." And were it wrapped around a story that was 50 percent, 20 percent, even 10 percent less corrosive and gross, maybe that would be easier to endorse.

I know what you're thinking: "Enough beating around the bush. Just tell us whether you liked it!" Consider this, which I will say in terms this movie would understand: If you were on an airplane, The Other Woman might not be preferable to simply staring into your empty airsick bag, but it has enough nicely executed physical comedy that in the event you become ill, it is definitely preferable to staring into your occupied airsick bag. This is what we've got, girls. This is what's on offer. Use your judgment.