Accessibility links
On The Ballot In Georgia This Year: JFK JFK is running for a Georgia state Senate seat this year — John Flanders Kennedy, that is. He's a Republican, but his signs bear an uncanny similarity to the logo the former president once used. 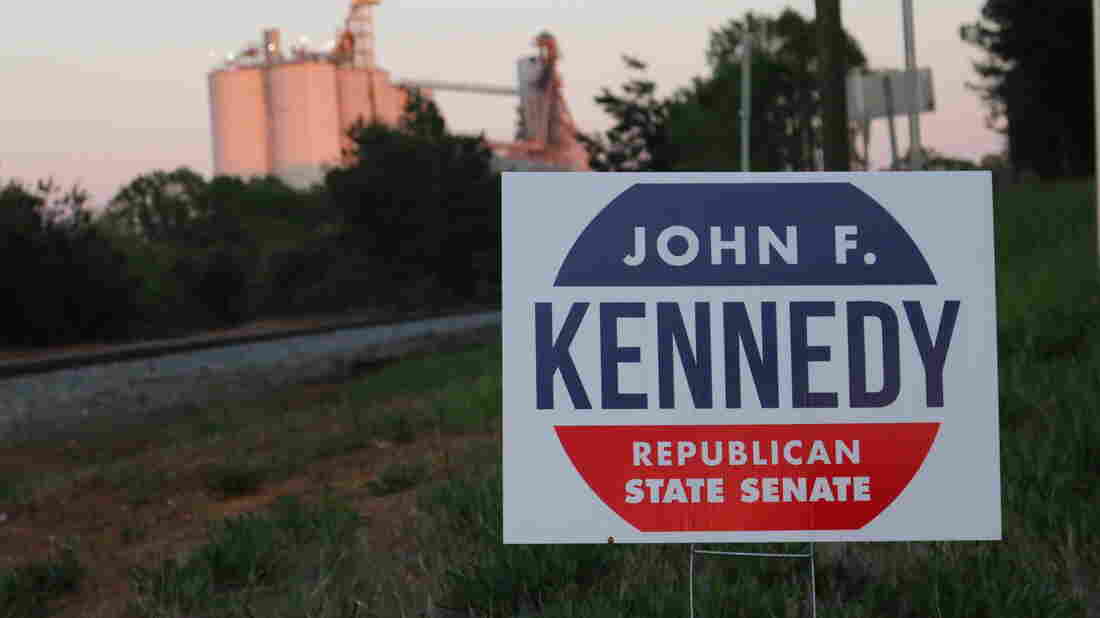 A campaign sign for John F. Kennedy, a Republican running for office in Georgia, by the railroad tracks outside the city of Forsyth. Adam Ragusea/GPB hide caption 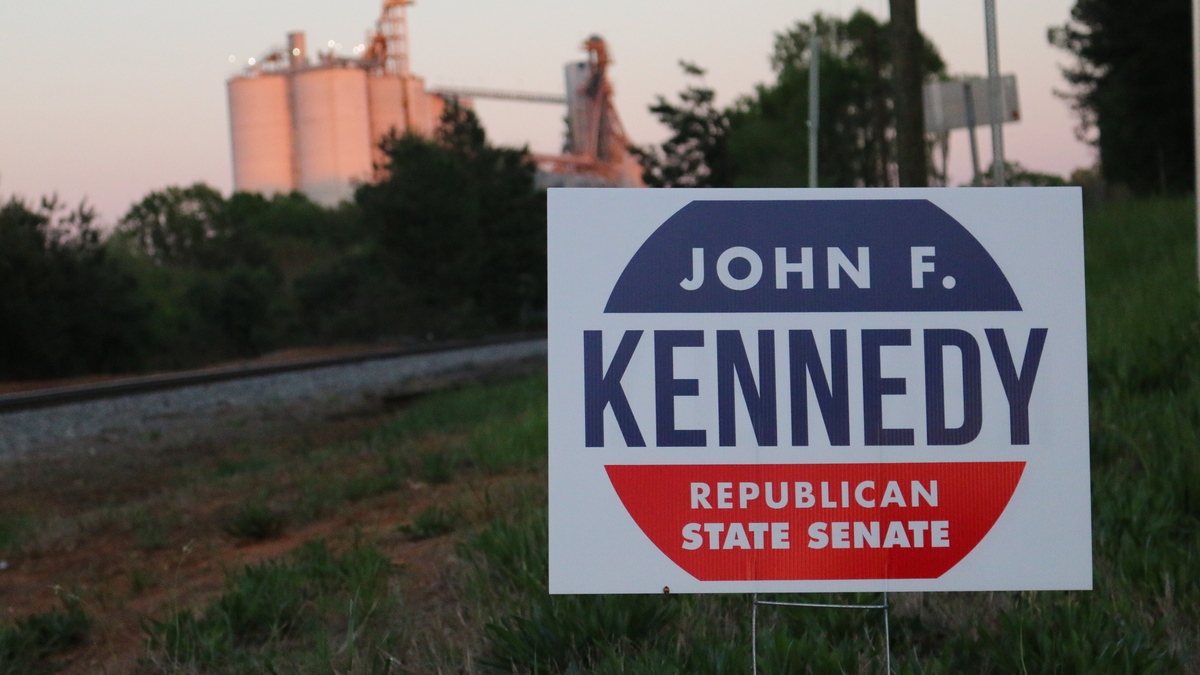 A campaign sign for John F. Kennedy, a Republican running for office in Georgia, by the railroad tracks outside the city of Forsyth.

Voting for this year's midterm elections is already underway in some states that hold early primaries. In Georgia, a field of seven GOP candidates is locked in a bitter fight for the nomination to succeed retiring Senate Republican Saxby Chambliss.

But another race that's turning heads in Georgia is one for state Senate that involves a candidate with a very familiar name: Kennedy.

The JFK running for state Senate in Georgia was introduced at a recent campaign event like this: "The man, the legend. And, the 'F' stands for Flanders, not Fitzgerald."

John Flanders Kennedy is charming, clean-cut and good-looking, but he's not from Boston, and he's no Democrat.

"I grew up in Adrian, Ga., [a] small town of 800 people. We used to watch the Andy Griffith show to see how city folk live," Kennedy says.

Kennedy is a self-described pro-family, pro-business, pro-Second Amendment Georgia Republican. He does admit to some angst about sharing a name with an icon — really, the icon — of the Democratic Party.

"Well, it's very reminiscent of the 'John F. Kennedy for President' branding from the 1960 campaign," says Chris Grant, a political science professor at Mercer University. "It is something that you would immediately look at as something a little nostalgic. It is vintage, if you will."

"I hired a group out of Atlanta, and the only suggestions I made going into it was, I said, 'I really like traditional red, white and blue letters and I don't like anything really weird looking,' and everybody seemed to gravitate toward this one graphic that they came up with," he says.

The political consultancy that Kennedy hired is called the Stoneridge Group and its CEO, Jay Williams, says he absolutely was trying to evoke President Kennedy with the artwork. For an obvious reason.

"I mean, how many stories have you done on political campaign identity? The fact that you're doing one now proves that we're getting folks talking about him," Williams says.

Williams says his strategy isn't about getting Democrats to vote for Kennedy. No Democrat qualified for the ballot. Kennedy only faces a Tea Party-aligned candidate in the GOP primary, who didn't respond to requests for an interview.

So a man named JFK is left courting conservatives — but it's worth remembering that some of those conservatives used to be Democrats. In 1960, Georgia did go "Kennedy."