Accessibility links
Fear For Sherpas' Future Grows With Each Climbing Tragedy Sherpas have a great reputation as the world's best climbers. But when something goes wrong up in the mountains, it deeply affects the small ethnic group and its communities around the world. 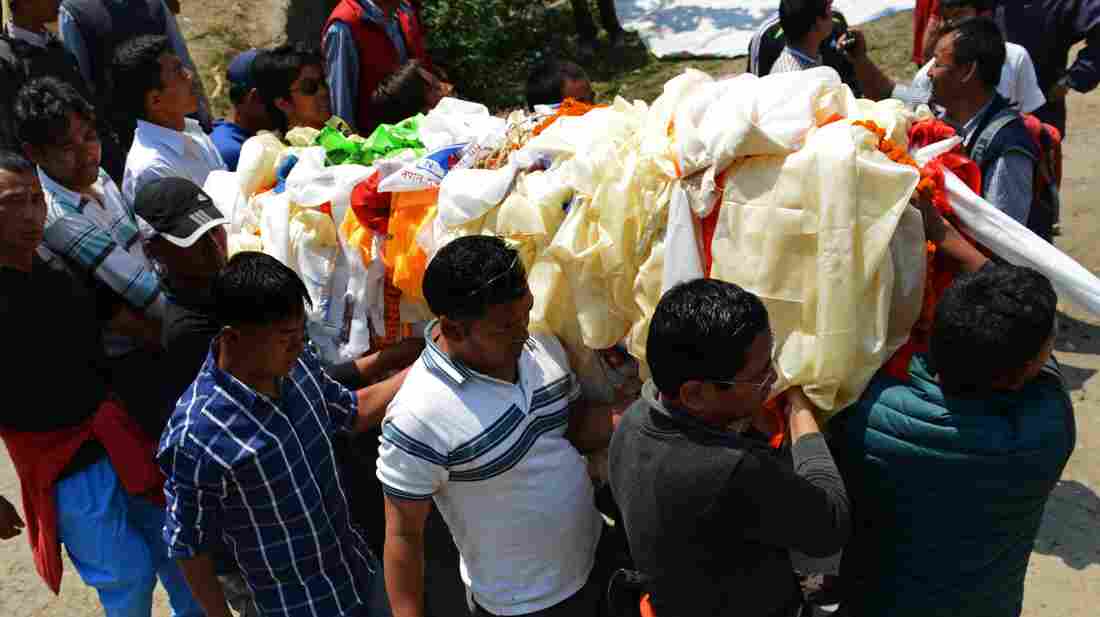 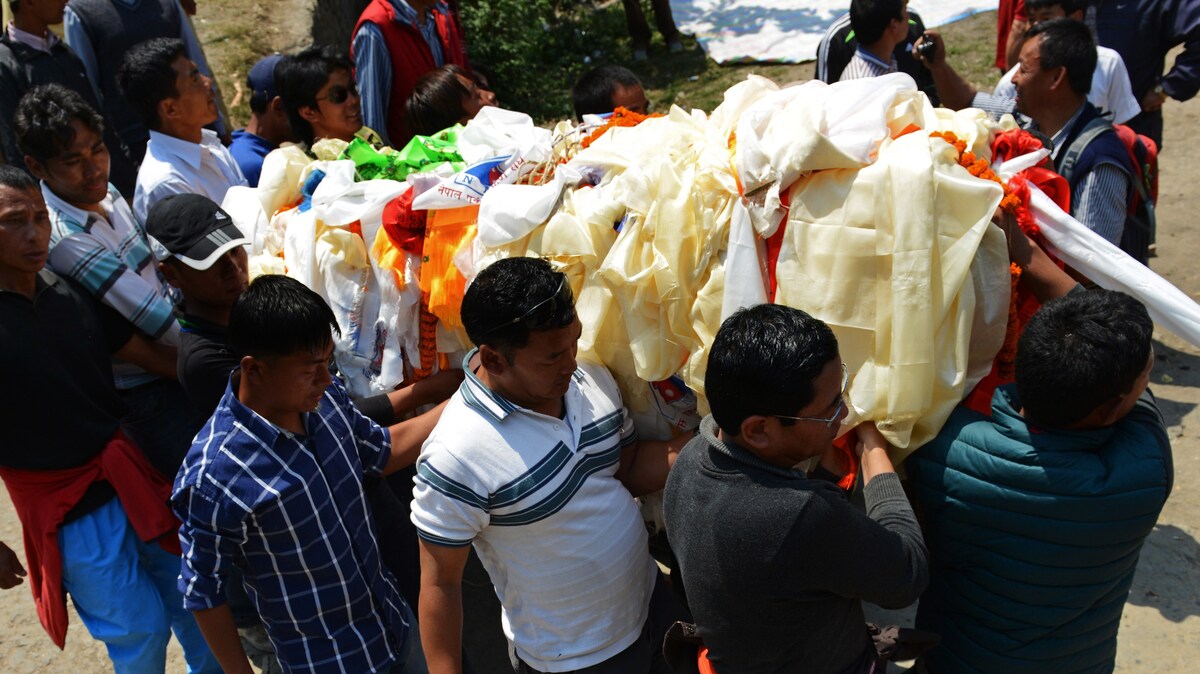 Relatives carry a casket bearing the body of a Mount Everest avalanche victim for cremation in Kathmandu on Monday.

Sherpas have a great reputation as the world's best climbers. "Sherpa" is not some sort of honorific or title; it's the name of an ethnic group — a tiny one. There are around 150,000 of them in Nepal.

While they fight for their lives on treacherous mountain terrain, Sherpas also struggle to keep their community — and its values — alive.

If you are a Sherpa, it's noted right in your name, like Ang Galgen Sherpa, who lives in Queens, N.Y., home to the largest community of Sherpas in the U.S.

Galgen has driven a yellow taxi in New York City for 12 years, but he used to guide people through the Himalayas.

The next question is usually about whether or not he has climbed Mount Everest. Galgen has not, but the question makes him feel incredibly proud. 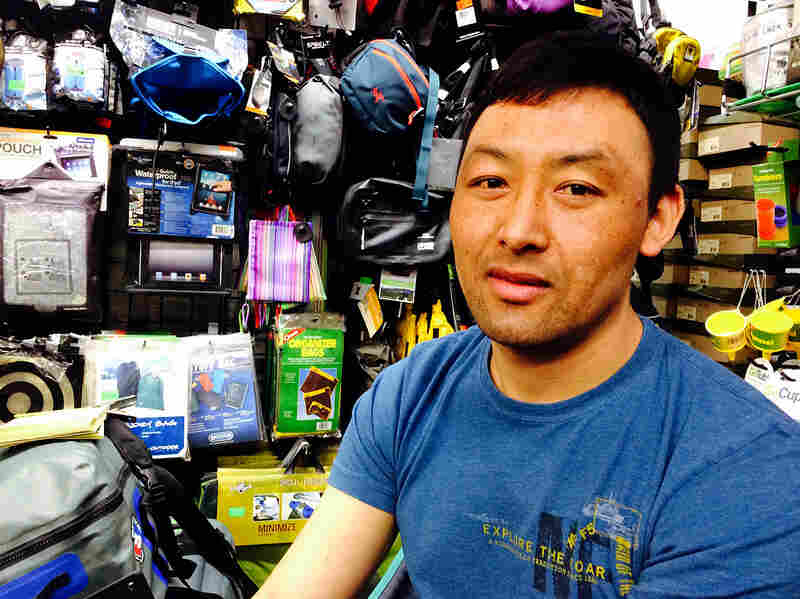 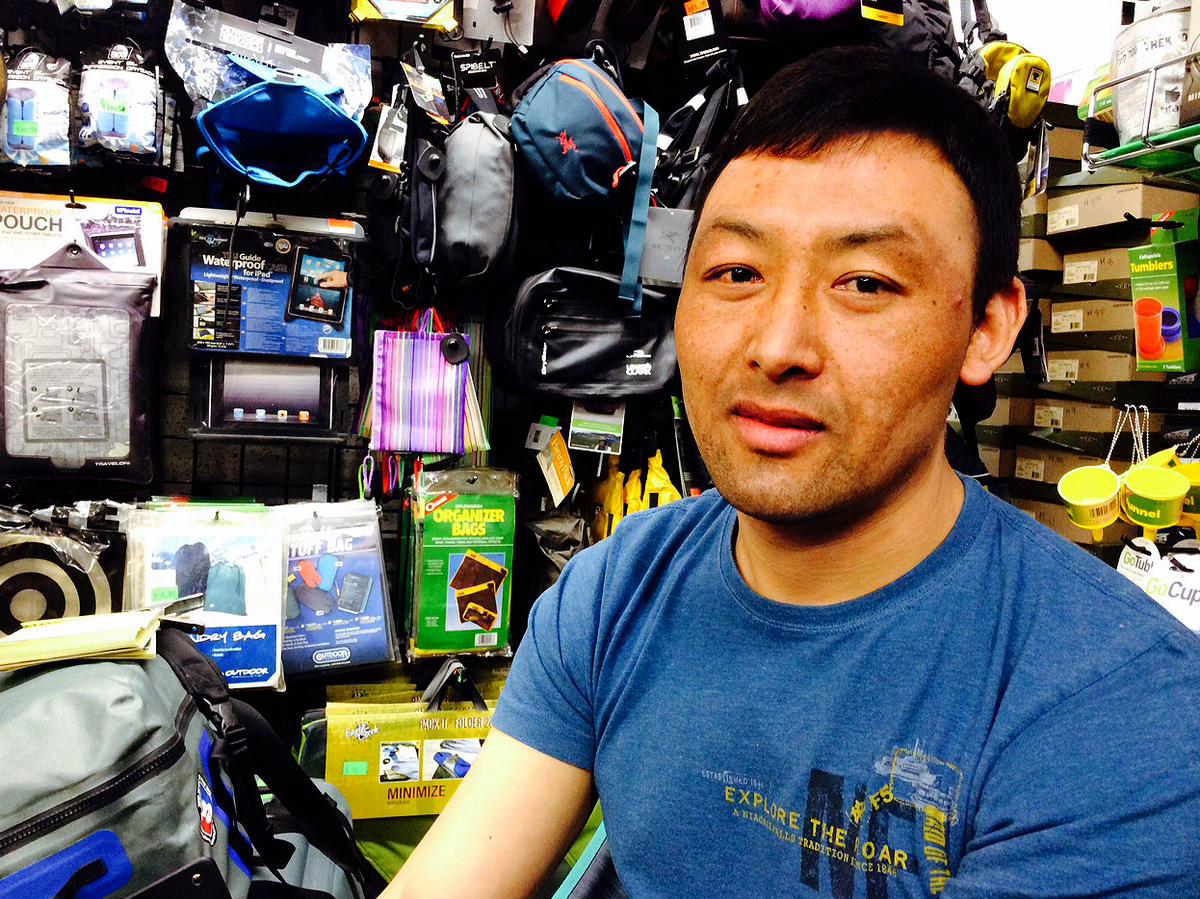 Passang Sherpa, a guide who works for Tent & Trails in New York City, says the recent deaths on Mount Everest are "very painful" to the Sherpa community here.

Of course, the deaths of so many Sherpa climbers last week was felt pretty profoundly in the Sherpa community here.

"We feel like we lost one [of our] family members," says Passang Sherpa, a guide who works for Tent & Trails in Manhattan. He's climbed Everest several times and has lost loved ones on expeditions. "This is very painful."

The Sherpa community is small, Passang says, and if the losses continue, he fears his people will simply disappear. A lot of Sherpas have grown up with this constant anxiety of losing their people to the mountain, or of dying themselves; their families have begged them to quit climbing.

The first climb to the summit, they'll tell you, is thrilling. And then invariably, it becomes a job, one that pays really well for Nepalis and brings in plenty of wealthy tourists. But it is also among the most dangerous occupations in the world.

Serap Sherpa, a co-worker of Passang's at Tent & Trails, is one of Nepal's greatest climbers. And yet, he always prays at the beginning of a climb.

"[But] normally, when we climbing, we just pray: 'Om mani padme hum,' " Serap says. "That mantra is very powerful mantra, and that protects you [with] safety and long life. But ... if there's a wrong time, even the mantra cannot protect them."

The Sherpa reputation can't be divorced from this danger, or for that matter, the sacred status of the mountains. Long before the British slapped their own name on it, the Sherpas called Everest Chomolangma, "Goddess Mother of the World." But the Sherpas' international reputation is relatively recent.

That reputation stems from the legendary climb to the summit of Everest in 1953, by Edmund Hillary and a Sherpa named Tenzing Norgay. Hillary spoke of Norgay with much respect as a climbing partner, a guide and someone who saved his life. But as the English-speaking Westerner, Hillary's is the name that many in the West associate with Everest.

Fresh Avalanches On Everest Appear To End Climbs In Nepal

Ed Viesturs, one of the world's foremost climbers, has been to the summit of Everest seven times. He says that Sherpas are invariably sidelined by Westerners in their accounts of expeditions.

"They'll show a list of climbers who might have reached the summit on a particular day, and it would list all the names of all the Westerners and it will say after that, 'and six Sherpa,' " Viesturs says. "It's almost like an afterthought."

There's also the vast cultural difference between the climbers. What is a sacred space for many Sherpas, is now increasingly a tourist destination for well-heeled foreigners. Viesturs says he resents how the Sherpas are doing more and more of the labor on these expeditions, as their foreign clients are doing less.

"You should earn your way to the top. You should contribute, you should carry some loads of equipment [and] you should help set up a camp," he says. "You shouldn't just sit around waiting for that red carpet to roll out."

Viesturs argues that the Nepali guide companies have actually perpetuated this problem, and notes that this shouldn't be seen as a simple issue of exploitation. He and the Sherpas who spoke to NPR say Sherpas have reaped great benefits from this system and are fully aware of the risks.

But Viesturs hopes something will change on the part of the climbers who travel all the way to Nepal to scale mountains like Everest: that they give full credit to the people who took them all the way to the top.