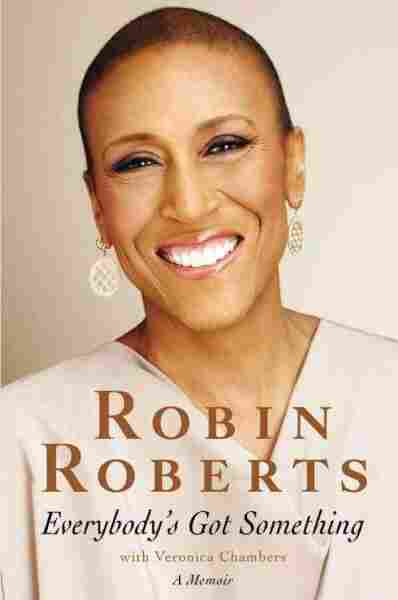 by Robin Roberts and Veronica Chambers

Title
Everybody's Got Something
Author
Robin Roberts and Veronica Chambers

When Good Morning America co-anchor Robin Roberts was a little girl, whenever she'd complain to her mother about how unfair life was, her mother would say, "Oh, everybody's got something."

Years later, in 2007, Roberts was diagnosed with breast cancer. "I had that moment of: Wow, I can't believe I'm going through this. Why is this happening to me?" she tells NPR's Rachel Martin. "And my mother ... sweetly and gently — said to me, 'Honey, everybody's got something.' And it just really stuck with me."

Everybody's Got Something is the title of a new memoir Roberts has coauthored with Veronica Chambers. In it, she describes her "somethings" — her breast cancer and a rare blood disorder, which required a bone marrow transplant.

Roberts shared her treatment and recovery with her Good Morning America audience. "As my mother would say: 'Make your mess your message," Roberts says.

She talks with Martin about her medical journey and about her personal life — including how she decided to introduce her longtime partner Amber to her audience. Click the audio link above to hear their conversation.

Robin Roberts has had a difficult decade by anyone's standards. The co-host of Good Morning America lost her father in 2004. Then her hometown in Mississippi was wiped out by Hurricane Katrina. A year later, she found out she had breast cancer and had barely recovered when she was diagnosed with M.D.S., a rare disease that required a life-saving bone marrow transplant. Roberts lost her mother during that treatment.

Through it all, she was trying to balance the demands of a high-profile job that often requires making personal struggles part of a public story. Roberts has written a new memoir detailing a lot of these struggles. It's called "Everybody's Got Something" - something her mom used to say to her.

ROBIN ROBERTS: She said it when we were youn, and we would be outside and something wouldn't quite go our way. And we'd come back in, complaining about this and complaining about that. And she would say, oh, you know, everybody's got something. And as we got older - I remember, really, when I was unfortunately diagnosed with breast cancer in 2007 and I had that moment of - wow.

You know, I can't believe I'm going through this. Why is this happening to me? And my mother sweetly - I mean, sweetly and gently said, honey, everybody's got something. And it just really stuck with me, Rachel. It's like, yeah and my something is no bigger, no more important, no anything more than anybody else.

MARTIN: As you mentioned, you were diagnosed with breast cancer in 2007. You were then treated and had a good prognosis.

MARTIN: When did you first hear the term M.D.S. or myelodysplastic syndrome?

ROBERTS: It wasn't until 2011, when I wasn't feeling quite well. And in 2012, the early part of that year - and I just - I was tired, Rachel. I was just - you know when something's not - and I kept thinking, oh, I'm going to shake it. I'm going to shake it. And fortunately, I had to regularly gone to see the doctor and had blood work done. And I was always concerned that the cancer would return.

MARTIN: Were you relieved when you heard, oh, yeah, it's not the cancer?

ROBERTS: Yes. You know what? You're right. I was because cancer - I don't want cancer again. And I'm thinking, yay. And they're like, oh, wait a minute. Dial it down a little bit.

MARTIN: What is the connection - or was there a connection between your breast cancer diagnosis in 2007 and your M.D.S.?

ROBERTS: Thank you for asking that, because there's a question about that. My oncologist at the time - been practicing medicine for decades. And I was only the third patient in her time as a doctor that this has happened. So it is extremely rare, but they do believe that there was a link between the treatment for breast cancer and M.D.S., for me at least.

MARTIN: So what was your prognosis going into the transplant? What kind of odds did they give you?

ROBERTS: At first, they weren't quite sure. And they kept doing more tests. I had a couple of bone marrow aspirations, which are quite uncomfortable. And the doctor just kind of put it in a computer and turned the screen. And there was a graph of one year and two years, and there was a dot in the middle. And I thought it meant that I had between one or two years to do something or...

MARTIN: To figure it out?

ROBERTS: And he got my attention. And I remember I slapped my fist on his desk and I was like, OK. You know, what do we do? What's the game plan? And he handed me some swab kits and said you have to see if your are siblings are a match. And I remember - my father had passed in 2004. And it was one of the rare times my mother was really upset with me. I said to her, Mom, you know, I have to have Dorothy and Sally-Ann, my two sisters checked.

And I need to ask you something, Mama. You know, I know Daddy's not here anymore. Does he have any more kids out there? I mean - and she looked - oh, mercy, honey. And I'm like, I don't know. Maybe. But I need some help. I need a miracle. I'll give you pass, Mama. I promise - you know, may he rest in peace. I will not get mad. And she was just like, oh, mercy. But I...

MARTIN: I assume the answer was no.

ROBERTS: No. The answer was no, Rachel. It was an emphatic no.

MARTIN: So all the while, you go through this transplant. And throughout, you have to balance your health issues with a very high-profile job and very public persona. For years, you did talk about your family in Mississippi, whom you're very close with. But you left out a huge part of your life - your partner, whose name is Amber. Why did you decide to keep that private for so long?

ROBERTS: When I met Amber, I was grieving the loss of my father. Less than a month later, Hurricane Katrina wiped out my hometown of Pass Christian, Miss. Then a year later, I was diagnosed with breast cancer. Point being - we had a lot that was going on. And I'm not trying to shy away from - it's a fair question.

I know it's hard for some people to believe - not everybody wants to be in the spotlight. Amber is someone who - very proud of what I do, but does not want to be the focus. And it has changed somewhat for her. But she also realized - because she is in the book - that as a caregiver, she has her side of the story. And I was so grateful that she allowed me to acknowledge her because she is a strong, strong woman who has been by my side for almost nine years.

MARTIN: How's your health now, if I can ask?

MARTIN: Has anything about your life and how you live it changed as a result?

ROBERTS: Oh, you know, there's a depth to it now. It's - I feel. I just - I just have a better appreciation. But I tell you, Rachel. I'm not going to be one of those - this is the best thing that ever happened to me.

ROBERTS: No. No, no, no, no. I learned lessons from it. I would've rather learned them another way.

ROBERTS: Not cancer, not M.D.S. But I think it - when you go through something like this, it accentuates - it heightens what's there to begin with. And I would like to think I was a halfway decent person and even more so now.

MARTIN: Robin Roberts. She is co-host of Good Morning America on ABC. Her memoir is called "Everybody's Got Something." It is on bookshelves now. Robin, thanks so much for talking with us and taking the time.

ROBERTS: I enjoyed it, Rachel. Thank you.