Accessibility links
Learning With Disabilities: One Effort To Shake Up The Classroom The traditional special education model keeps kids with disabilities separate from their peers for much of the day. But a few educators and advocates are pushing for something different. 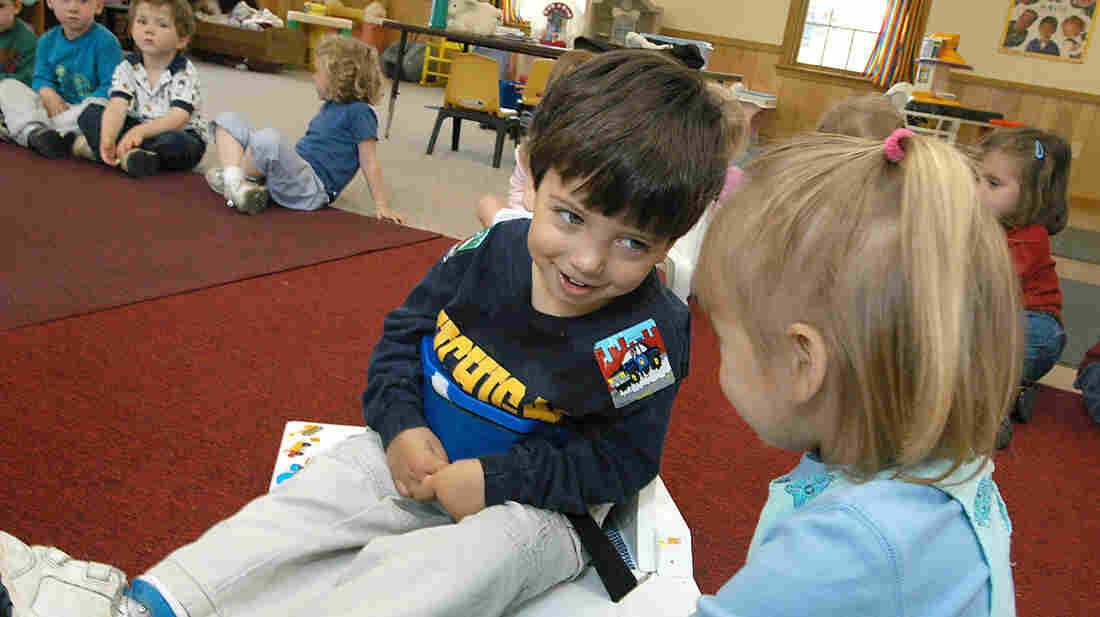 Samuel Habib, seen here at 3 years old, sits in his supportive corner chair in class. Samuel, who has cerebral palsy, is now 14 and is headed to high school. Dan Habib, Samuel's father, is an advocate for inclusion and made a film about his son called Including Samuel. Dan Habib/includingsamuel.com hide caption 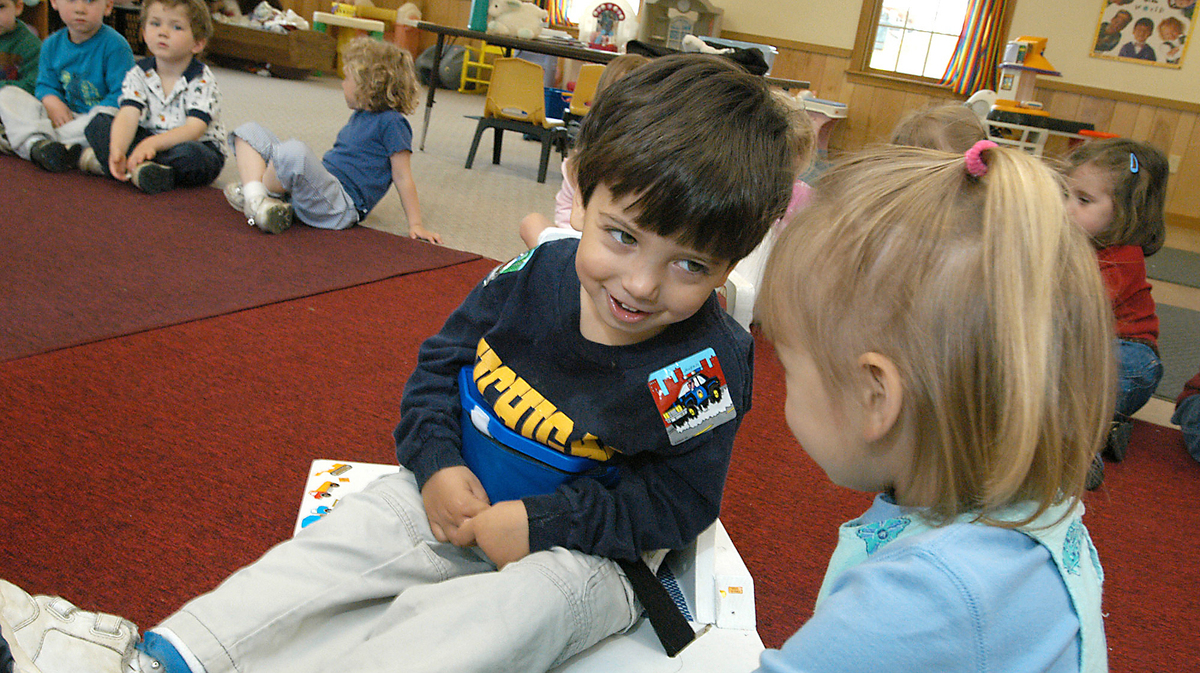 Samuel Habib, seen here at 3 years old, sits in his supportive corner chair in class. Samuel, who has cerebral palsy, is now 14 and is headed to high school. Dan Habib, Samuel's father, is an advocate for inclusion and made a film about his son called Including Samuel.

This is what an inclusive classroom looks like: Children with disabilities sit next to ones who've been deemed "gifted and talented." The mixing is done carefully, and quietly. Students don't necessarily know who's working at what level.

Despite a court ruling 25 years ago that gave children with disabilities equal access to general education activities, change has been slow.

Today, about 17 percent of students with any disability spend all or most of their days segregated. Children with severe disabilities can still expect that separation.

Presidio Middle School in San Francisco has been pushing for more integrated classrooms. But even champions of an inclusive model can have difficulty balancing students' varying needs.

At Presidio, about 10 percent of the school's 1,200 students have special needs. That covers a broad range: from a mild learning disability to moderate and severe physical, emotional and mental disabilities.

Principal Tony Payne is in his second year at the school, and in that time he and staffers have pushed to do more to integrate special education children into the general education classrooms.

Looking at one seventh-grade math and science class, "you can't necessarily tell me who's the gifted kid and who's the kid with the disability," Payne tells NPR's Eric Westervelt.

There are some 30 kids sitting in four rows of wooden desks. All are using old — but functioning — school-issued laptop computers. A higher-performing student sits in the middle, says teacher Grey Todd.

"She sits with kids on either side of her that might need extra help, so they can just turn to her and ask for help," he says.

Todd "co-teaches" this math and science class with a special education teacher. Both teachers say new software and technology have greatly enhanced their ability to tailor lessons to each student and expand inclusion.

Their class is one of only a handful of mixed classrooms at Presidio, but Todd says so far, it is working and changing lives.

"We're seeing kids that in my day would have never been in a classroom like this showing that they're perfectly capable," he says. He recalls one student who was very high on the autistic spectrum and had trouble communicating with people, but was one of the top-performing students academically in the whole school.

"He probably wouldn't have had that opportunity had he been sent to a special day class," he says. "When he's able to be accepted ... and not ostracized or sent to a separate room, I think it makes him that much more viable to himself to the community."

But even at a school district such as San Francisco Unified, which is making an effort to expand inclusive classrooms, administrators and teachers say there are limits.

On Presidio's ground floor, eight kids with more severe disabilities have their own classroom. It's reserved for children with moderate to severe physical, emotional and intellectual challenges.

This segregated classroom is the traditional mainstay of special education. But even with these more challenged kids, Presidio is including them every day in gym class, art and other electives.

In Age Of Custom-Tailored Ed Tech, Teachers Shop Off The Rack

Presidio Middle School special education teacher Craig Holvoet says the opportunity that inclusive classrooms open up is important. But after 40 years of teaching special education, he says it's complicated.

"I believe inclusive is fine if you want the socialization, but if you want functional living skills, or you want survival skills, then you have to break it down," Holvoet says.

After two years of inclusive classrooms, Presidio Middle School is still trying to figure out where the limits are. Two of the kids with disabilities in Todd's math and science class will have to move downstairs to that separate classroom next year. With math skills at the third-grade level, he says, they're just too far behind to stay in the inclusive class.

The Opportunity Of Inclusion

Dan Habib, with the University of New Hampshire's Institute on Disability, is an advocate for inclusion. His son Samuel, who has cerebral palsy, is 14 years old and about to go into high school. Habib says his son and their family have reaped the benefits of full inclusion.

"That inclusion in school transfers to the relationships and the support he gets from friends outside of school," Habib says. "He's also had a tremendous impact on his peers. His peers now see disability as part of the natural diversity of our world."

Changing special education requires altering systems that have been in place for a long time, Habib says, systems that many teachers and administrators are familiar with. Doing so is a lot of work, he says.

"But if we know it's going to yield better outcomes for kids with disabilities, it's the only way to go forward," he says.

Habib says parents are entitled to make whatever decision they feel is best for their child, but he thinks there is more opportunity for students with special needs in inclusive environments.

Habib says as a matter of public policy every school needs to give every child access to the general education curriculum; he says they need to give kids that opportunity.