Accessibility links
'Nothing More To Lose' Forges A Connection To Palestine Poet Najwan Darwish's first collection to appear in English muses on identity, history and heartbreak. Reviewer Amal El-Mohtar says it's passionate, yet "so matter-of-fact that it stops the breath."

'Nothing More To Lose' Forges A Connection To Palestine

'Nothing More To Lose' Forges A Connection To Palestine 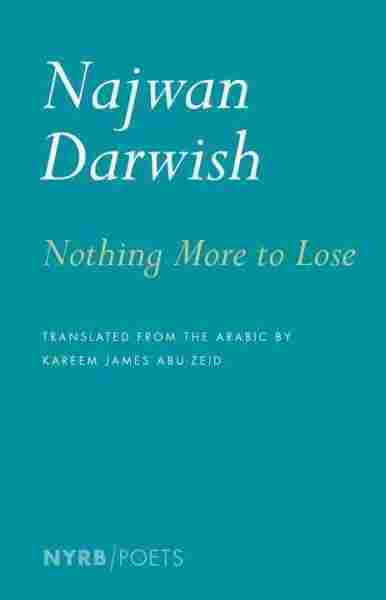 Nothing More to Lose

Roughly halfway through Najwan Darwish's Nothing More to Lose, wiping awkwardly at tears and trying self-consciously not to sob with my partner in the room, I found myself wondering what someone with no connection to Palestine would make of it.

I grew up with the conflict. I have never not been aware of it. I was born in Canada to parents who left Lebanon during the Civil War, and raised with the understanding that there was an unfairness in the world that touched us, our friends, our family. Poets, artists, engineers, builders, former soldiers — I learned that no one who came to visit our home lacked an opinion connected to an experience connected, always, in some way to Palestine.

So I am trying, now, to imagine someone reading it whose life does not have a conflict-shaped wound built into it, into which Darwish's words fall like painful, purifying salt. I am trying to imagine a lover of poetry picking up this book and opening it, a blank slate, allowing Kareem James Abu-Zeid's translation to inscribe itself on their thoughts as they learn, in poetry's slantwise way, about Gaza, Bint Jbeil, Sabra and Shatila.

Here is what I think they would find: a collection of very short poems — often no more than a page — speaking of love, sorrow, loss, hope and despair in a voice simultaneously so passionate and so matter-of-fact that it stops the breath.

Nothing More to Lose contains poems written between 2000 and 2014, covering a wide range of emotional experience, and curated into a shapely whole with recognizable movements. It opens with the title poem, which is an invitation into the collection and a map toward the reading of it, all while providing a good metaphor for the way Abu-Zeid has managed these translations:

Lay your head on my chest and listen

to the layers of ruins

behind the madrasah of Saladin

in the village of Lifta

The translation is astonishingly dexterous, to the point where several poems read as if they'd been written in English. Abu-Zeid has a wonderful ear for rhythm, and a fine sense of effect when choosing which Arabic words to preserve in the midst of English text. Key lines even retain the rhythm of the Arabic: in "Jerusalem II," "the murdered hum their poems on the hills" renders the iambic pentameter of the orignal al qutla yasjiloun 3alat tilal. Abu-Zeid also succeeds in representing much of Darwish's lyric playfulness: look at how "lay your head" is echoed in "layers," how "my chest" anticipates "sliced open," how successful is the conflation of heart and home on literal and metaphorical levels.

Indeed, you could say this is a collection of ruins layered between heartbeats and you would not be far wrong.

These poems range far and wide in subject, place, time: There are evocations of Rio de Janeiro as well as Jerusalem, Jesus and Saladin as well as contemporary politicians and friends. Musings on and examinations of identity, especially "Arab" identity, inform many of these pieces; there is an awareness, too, of history as a character and a setting, as a contested space that is both nightmare and testament. But throughout this variety Darwish's singular, wonderful voice — a voice flexible and confident enough to be capable of celebrating and lamenting, joking and condemning, often in the same poem — unites and animates them all.

While the breadth of subject matter is considerable, Darwish's poems are often focused on very specific moments, names and monuments; recognizing that, there is a helpful selection of notes at the end (though the text itself is unmarked), offering poem-by-poem contexts and explanations for pieces that require more specialized knowledge to support their full effect. But I never felt that a poem's effect was lost without them; one does not need to know anything about Bint Jbeil to feel, keenly, the guilt and awe in "the debt I now owed / to those who hoisted dawn for one more day / over the hills of Bint Jbeil," or to marvel at the precision with which Darwish articulates our distance from those who suffer more than us.

This is a collection of heartbreak, encompassing the whole of that experience: the pain of the wound, the numbness in its wake, the sardonic attitude developed like an oyster's silk around a grain of sand to make the agony bearable. But it is also, crucially, a loving collection: Even in poems that seem to despair there is a fierce, almost violent love — for people, for poetry, for place.

I should warn you, perhaps, imaginary reader whose life differs so much from mine — whatever your views, politics, past experiences or lack of them — it will be impossible, by the time you have finished reading this collection, to escape a connection to Palestine.