Accessibility links
Training Men And Women On Campus To 'Speak Up' To Prevent Rape Colleges are teaching students what's known as bystander intervention, based on the idea that both men and women can intervene to interrupt behaviors that could lead to sexual assault. 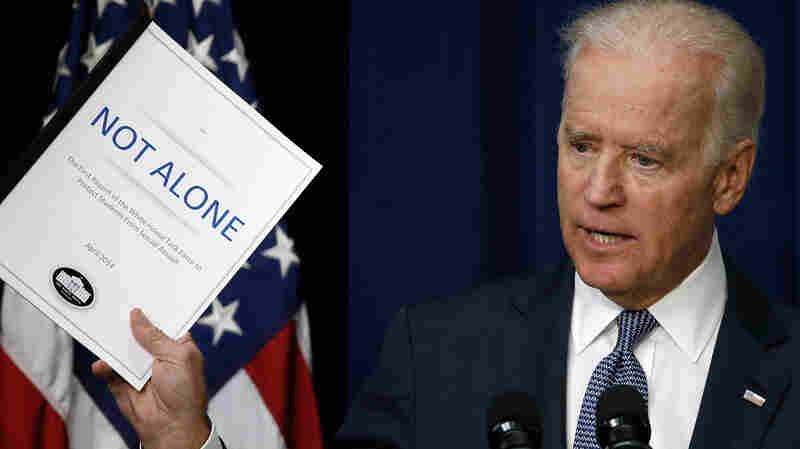 Vice President Joe Biden on Tuesday announced the release of the first report of the White House Task Force to Protect Students from Sexual Assault. The report calls the intervention of bystanders one of the "most promising prevention strategies." Win McNamee/Getty Images hide caption 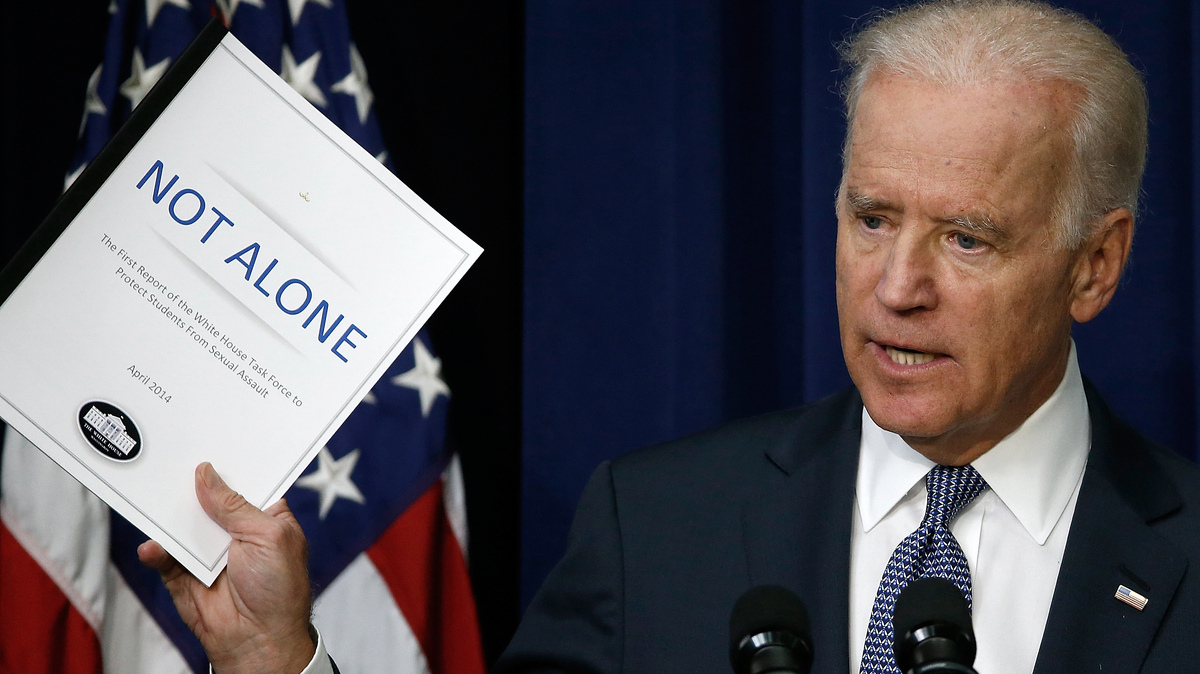 Vice President Joe Biden on Tuesday announced the release of the first report of the White House Task Force to Protect Students from Sexual Assault. The report calls the intervention of bystanders one of the "most promising prevention strategies."

A White House task force on Tuesday recommended ways to reduce rape and relationship violence on college campuses, pointing to, among other things, programs designed to teach students to intervene before an assault happens.

One of the programs, known as "bystander intervention," is based on the idea that both men and women can interrupt behaviors to prevent sexual violence.

The training is designed to change social norms and encourage people to find ways to intervene.

Back in the 1970s and 1980s, efforts to prevent sexual assault focused mostly on women. Young women were advised to change their behavior: not to drink too much, and to leave parties with someone they knew. But that didn't change men's behaviors.

Now, bystander intervention training is taught in colleges around the country, including at MIT, Michigan State University, University of Montana and Northeastern University in Boston.

Recently, students at Northeastern organized a "prevention festival," handing out chocolate ice cream, candy bars and pamphlets with statistics on sexual assault. According to the Centers for Disease Control, almost half of the women and more than a third of the men who've experienced sexual violence were first sexually assaulted when they were of college age. One in five female students will be victims of sexual assault on college campuses, says the White House task force.

Among those pledging their support is a group of men from the fraternity Phi Delta Theta. Daniel Asulin, a junior, says it's possible to intervene calmly.

"If something actually doesn't seem right or a guy's being a little too aggressive or something, just lean in and say ... 'Hey, man, like, why don't you just ease up a bit? Like, she doesn't seem to be going with it,' " Asulin says.

Bystanders can also turn on lights or shut off music at a party to interrupt unwanted sexual attention. They can distract or embarrass someone.

Research at Prevention Innovations at the University of New Hampshire has found that after students are trained in the bystander approach and exposed to a social marketing campaign, the students say they're using these skills and that they see intervening as their responsibility. But more research is needed to see whether bystander intervention prevents sexual assault.

Sarah Banis, a 20-year-old from Northeastern, describes how she intervened at a New Year's party. A guy was following and touching a friend of hers who had told him to leave her alone.

"I just turned around and I said, 'She already said no once, so why don't you just stop? Like, she's clearly not into it!' " Banis says. "That is exactly when actually he did stop and left her alone. All we have to do is speak up."

Banis says there are many ways to intervene without putting oneself at risk, but more people need to be trained.