Accessibility links
Return Of A Classic Romance: 'The Windflower' Sails Again For years, scarce copies of Laura London's 1984 romance The Windflower were treasured by readers. Reviewer Sarah Wendell hails its reissue and explains the concept of "Good Book Noise."

Return Of A Classic Romance: 'The Windflower' Sails Again

Return Of A Classic Romance: 'The Windflower' Sails Again 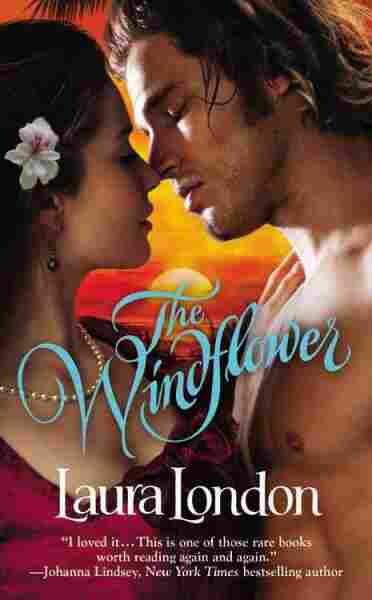 I first read The Windflower after I was told by several people that without it, my romance education was incomplete — and often, whoever was advising me would just degenerate into making incoherent noises. I call this Good Book Noise, and I think we've all made it while discussing a book we love. It's a combination of a gasp and a sigh, usually followed by a quietly reverent, "Ah, I love that book."

A great deal of Good Book Noise has been made about The Windflower, and with good reason. It is one of the most cherished historical romances ever published.

The book itself is also something of a legend — by which I mean that for some time, finding a copy was really difficult. It's been out of print for years, but still so beloved by readers that it's seldom found in used book stores. Pristine copies have been listed for sale for hundreds of dollars, and I know a few librarians who have had to report their copies as "lost" because they never returned to the shelves. The book itself, both the pages and the story within, is a treasure.

But we won't have to hunt for copies anymore: The Windflower is being reissued this month, 30 years after the original publication — and for the first time in a digital edition. Today's romance readers will be able to discover it easily, and I confess to a bit of trepidation over how it will be received. Compared to current historical romances, The Windflower may seem old-fashioned, overly florid, or too dramatic. But in order to fully understand what kind of book it is, it's important to understand what it was.

The Windflower was first published in 1984, by the husband and wife writing team of Sharon and Tom Curtis under the pseudonym "Laura London." Back then, romances were very different, in ways that might make a present day reader cringe. The term "bodice ripper," often used to sneer at the romance genre, has its origins in the historical romances of that period because sometimes, bodices were ripped. The heroines were innocent to the point of being completely clueless about anything resembling sexuality; the heroes were malevolent, menacing or sexually aggressive. The plots were sometimes over the top, with kidnappings, spies, legends and secret identities, and the prose veered toward the purple.

On the surface, The Windflower seems like a product of its time. The summary itself is a little ridiculous: a young, innocent American woman is kidnapped and taken aboard a pirate ship during the War of 1812, where the pirate captain and his crew believe her to be a traitorous conspirator. Even the cover art for each reprint — including the newest edition — features the timeworn hallmarks of historical romance that invite snorts of laughter: fuchsia backdrops, impossible hairstyles, drowsy-lidded facial expressions, the occasional drunken seagull. Plus more fuchsia. And did I mention fuchsia?

But what the Curtises do with those worn, familiar tropes is what readers love about The Windflower: Every element is subverted or twisted. Each time a plot cliche seems imminent, something unexpected happens instead. When I finished reading The Windflower for the first time, I was both elated and miserable. It was one of the most intriguing books I'd ever read. There are references in the first chapter that seem meaningless until their importance is revealed in the final scenes. There are secondary characters who are so vivid, they become indelible parts of your reading memory. Everyone who said I had to read it was right: The Windflower is worthy of Good Book Noise. But I also remember feeling bleak because I was pretty sure that it had permanently ruined me for historical romances.

Fortunately for me and my own dramatic tendencies, that wasn't the case. And now, along with many other readers, I get to experience The Windflower again. I feel I should warn people to expect a difference in style, that the language can be at turns lyrical and oblique, and the plot sometimes moves with a slow, methodic intensity. I know that nostalgia may influence some affection for this book, but it's still a unique and wonderful story worth discovering. After years of suffering through the scarcity of Windflowers, my hope now is that this beloved classic will illuminate how much has changed in the genre we love, and how a good story — and Good Book Noise — will always endure.

Sarah Wendell is the co-founder of Smart Bitches, Trashy Books.