Accessibility links
Texas Family's Nuisance Complaint Seen As Win Against Fracking A jury awarded nearly $3 million to the Parrs, who say leaks at a natural gas site made them ill. The family won the suit without having to prove that the drilling company broke environmental laws. 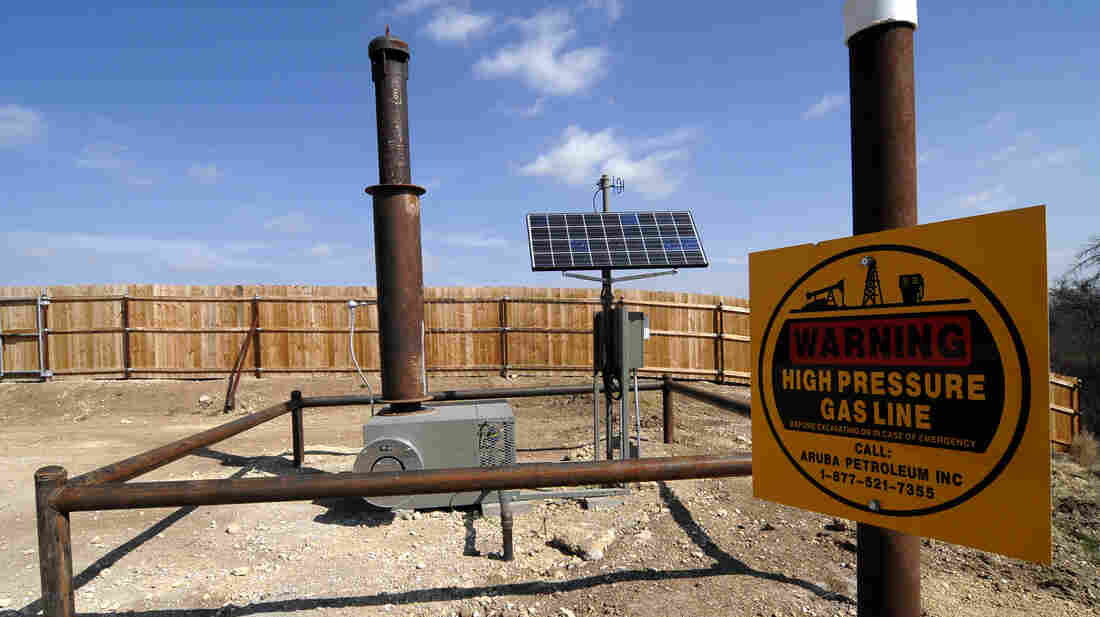 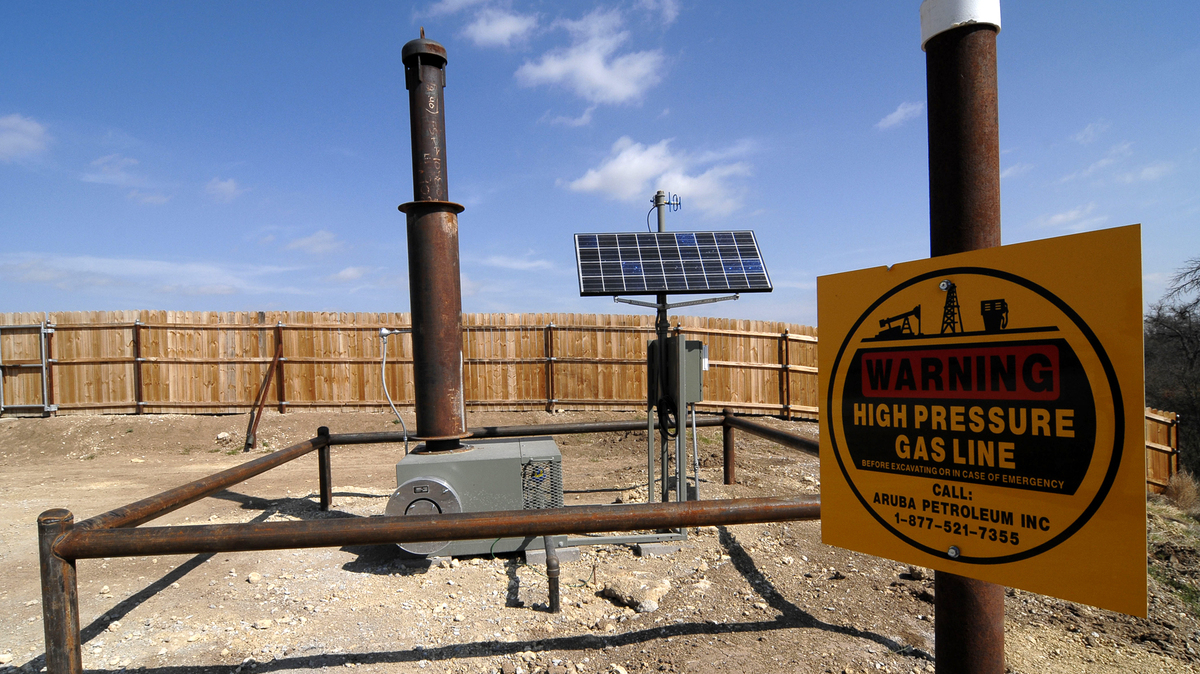 Equipment installed by Aruba Petroleum at a natural gas well near Decatur, Texas. A family in North Texas sued Aruba, calling its drilling sites a nuisance to the family's health. A jury awarded the family nearly $3 million.

A Dallas jury recently awarded nearly $3 million to a family who said they were poisoned by a natural gas drilling operation near their North Texas ranch. The verdict, reached on April 22, is being called a landmark by opponents of the drilling technique, called hydraulic fracturing or "fracking."

Bob and Lisa Parr have been telling their story for a while. They even appeared in the anti-fracking documentary Gasland II. But since the verdict, Lisa Parr says it feels like she's been telling it nonstop.

It started in 2008. She had just married Bob and moved with her daughter to his North Texas ranch.

"I started feeling bad. I blew it off as flu," she says. But months went by, and she kept feeling sick.

"I had a rash throughout my body," Lisa Parr says. "My lymph nodes stuck out in my neck like the size of pecans. There was four of them on each side."

The doctors treating Lisa Parr decided the cause was something in the environment. The family talked to neighbors, one of whom kept a log of spills and leaks at nearby natural gas sites.

"When they showed me those dates, I flipped back, and those were the dates I was either in the emergency room or at a doctor's office," she says.

The Parrs sued several nearby drilling companies. Of those suits, all but one was dismissed or settled out of court. Bob Parr says one remaining company, Aruba Petroleum, never offered to settle. "They were kind of the main player there next to our house," he says.

He believes Aruba was responsible for the family's illness. Last week, a jury agreed.

It's been called the first anti-fracking verdict in the U.S., though the Parrs' complaint involved not just fracking but all of the operations that go along with natural gas production. The verdict is unique, according to professor Tom McGarity, who teaches environmental law at the University of Texas, Austin.

"It is rare for any case to go to the jury in a civil case, just simply because most settle," he says.

When it comes to drilling companies, those settlements often include gag orders, meaning the people involved can't talk about their experiences.

"[Aruba Petroleum] apparently decided to draw the line, which as it turns out was not necessarily a very good decision," McGarity says.

Deep In The Heart Of (A Transforming) Texas

In a statement after the verdict, the company expressed its disappointment, saying it's in compliance with Texas air quality rules. But that doesn't necessarily matter, because the Parrs filed a nuisance claim. It's the same kind of suit that's sometimes brought against unruly neighbors, even if they haven't been charged with a crime.

"The interesting aspect of the nuisance claim is that it is specifically in addition to the public law," says professor Hannah Wiseman, who studies fracking regulations at Florida State University.

She says nuisance claims are increasing in parts of the country where oil and gas drilling happens near people's homes.

"They allow this very broad argument that property use has been unreasonably interfered with, and I think they in part fill in what some people see as gaps in the regulatory regime," Wiseman says.

She expects more nuisance claims, especially in places like Texas, where regulations are relatively lax. The Parrs' lawyer is already getting calls from other property owners.

As for the Parrs, they say they never set out to fight fracking, just one irresponsible company. A judge still needs to sign off on the verdict. If that happens, Aruba Petroleum is expected to appeal.