Accessibility links
Want A Shot At $10,000? Solve Kentucky's Great Bourbon Mystery Toasting the Kentucky Derby with a shot of prized Pappy Van Winkle bourbon will cost you. Last fall, 222 bottles were stolen straight from the distillery, and the police still don't know who did it. 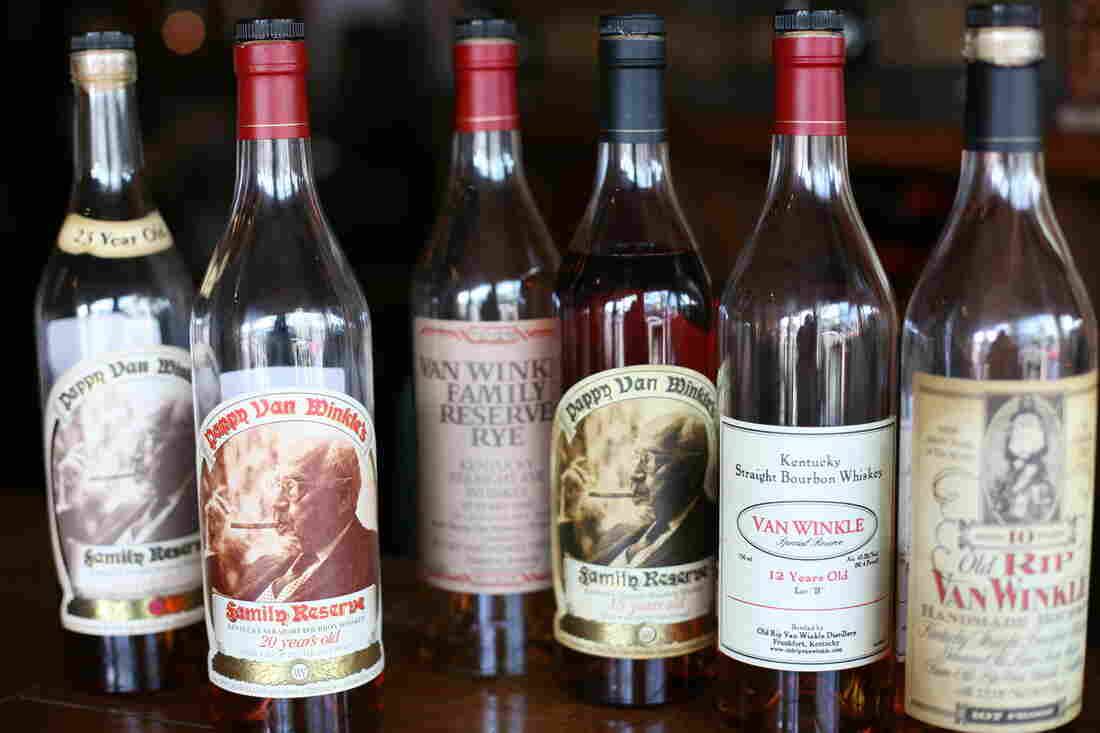 Pappy Van Winkle bourbons at Bourbons Bistro in Louisville, Ky. The spirit was pricey even before a heist at the distillery last October. Now, a 2-ounce pour can cost $100. Noah Adams/for NPR hide caption 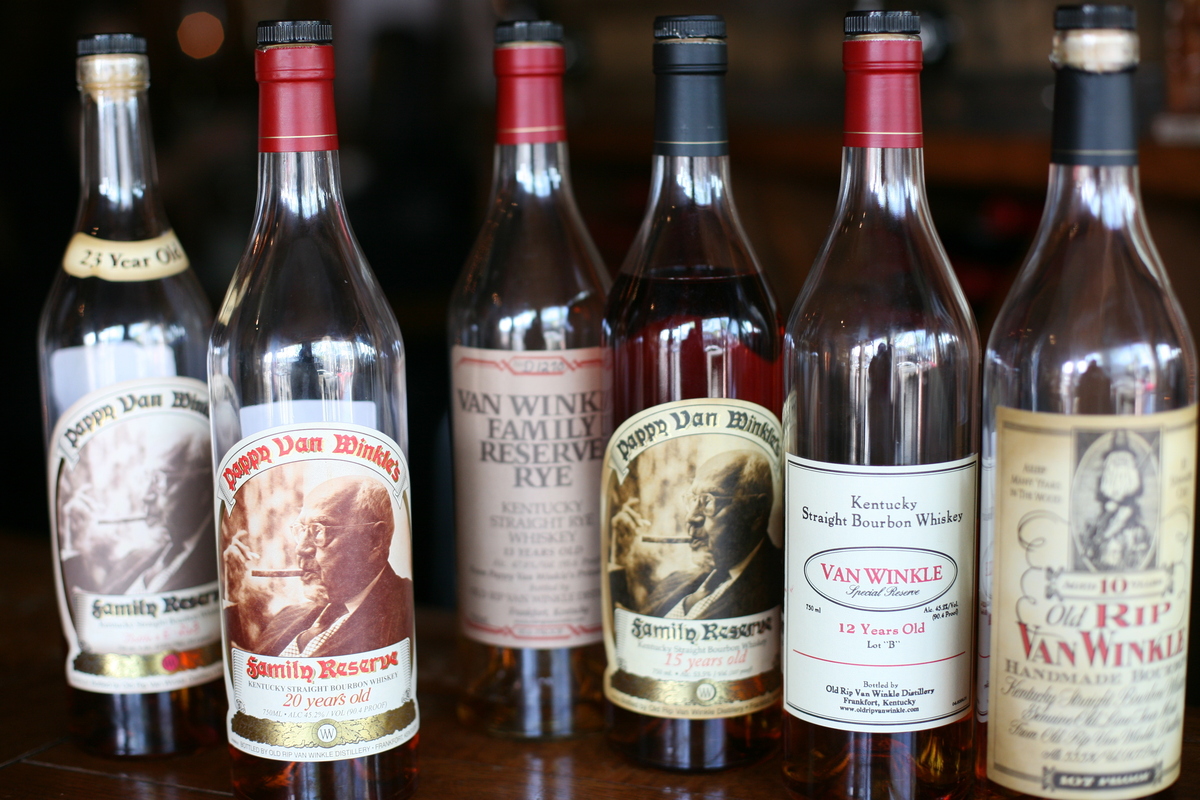 Pappy Van Winkle bourbons at Bourbons Bistro in Louisville, Ky. The spirit was pricey even before a heist at the distillery last October. Now, a 2-ounce pour can cost $100.

Saturday marks the 140th Run for the Roses: the Kentucky Derby. Great horses, great hats — but where's the Pappy Van Winkle bourbon for the mint juleps?

Last October, more than 200 bottles of the prized spirit were stolen right out of the distillery in Frankfort, Ky. The county sheriff believes it was an inside job, and a $10,000 reward remains on offer.

Pat Melton, the sheriff of Franklin County, Ky., has these facts: In the small city of Frankfort, 222 bottles disappeared from the Buffalo Trace Distillery. The bourbon had been aging in oak barrels, some since the mid-'90s, and the bottles were in a locked, secured area, ready to be shipped.

Melton says this had to be an inside job. "It had to be internal. It was behind a second lock and key inside a warehouse," he says. "That was a good clue and a good start."

A Reward From 'Somebody That Cares About Bourbon'

In the sheriff's office, they're following the phone tips and the email trail. "Detectives have interviewed more than 100 employees at Buffalo Trace throughout the course of this investigation so far," Melton says.

As for Buffalo Trace? The company isn't saying anything while the investigation continues.

Melton says he has two promising leads. The $10,000 reward, much of that from someone the sheriff calls an "undisclosed source," helps keep all this alive.

"They didn't want to be identified," Melton says. "It's somebody that cares about bourbon very much and wanted to help with the investigation."

The bourbon was already scarce before the theft; a bottle of 23-year-old Pappy Van Winkle could change hands privately for as much as $1,000. At the Party Mart liquor store in suburban Louisville, asking for a bottle of Pappy Van Winkle elicits a laugh from manager Garret Brown.

When the store does have it in stock, 10-year-old Pappy retails for $39, up to $235 for a 23-year-old bottle. Each fall, Party Mart gets an allocation of somewhere upwards of 30 bottles — not nearly enough for Pappy enthusiasts.

"We do a lottery for it," Brown says. "Send out an email and tell people to be here at a certain time on a certain day. And we literally just draw numbers out of a hat."

The last time the store did it, Brown says 640 people showed up. "There [were] people inside and outside, looking in the store."

The Louisville restaurant and bar Bourbons Bistro has 125 regular bourbons, and 25 very special ones, on the shelf. For 2 ounces, the restaurant's customary pour, the 23-year-old Pappy Van Winkle will set you back $100, says bartender Katie Haddix. A shot of 20-year costs $75.

"A lot of people are surprised, you know, shocked ... that's how much it is for one pour" of the Pappy Van Winkle, she says.

Maggie Kimberl, a bourbon writer for Louisville.com, remembers that just six years ago, Pappy Van Winkle didn't sell so much — it would get dusty on the store shelf, she says. Then came the craze.

"There was an article in, I believe it was Wine Enthusiast — they gave Pappy Van Winkle a 99 or 100 rating," she says. "And after that, you couldn't get it anywhere, you couldn't find it anywhere."

Back at the Buffalo Trace Distillery in Frankfort — the scene of the crime — PR manager Amy Preske shows off "Warehouse C," a cavernous old brick building full of whiskey.

"This is one of our oldest aging warehouses on property," Preske says. "It was built in 1881. It has six floors in this warehouse and about 25,000 barrels," aging from three years up to 23 years.

Preske and the company have no comment about the October theft. For the moment, it seems like all that Pappy Van Winkle bourbon has somehow evaporated.