Accessibility links
C'mon, Mindy: Enough Already. Own Your Awesomeness. As The Mindy Project wraps its second season, Mindy enthusiast Jessica Daniels says it's time for Dr. Lahiri to get past the need to reshape herself for her boyfriends. 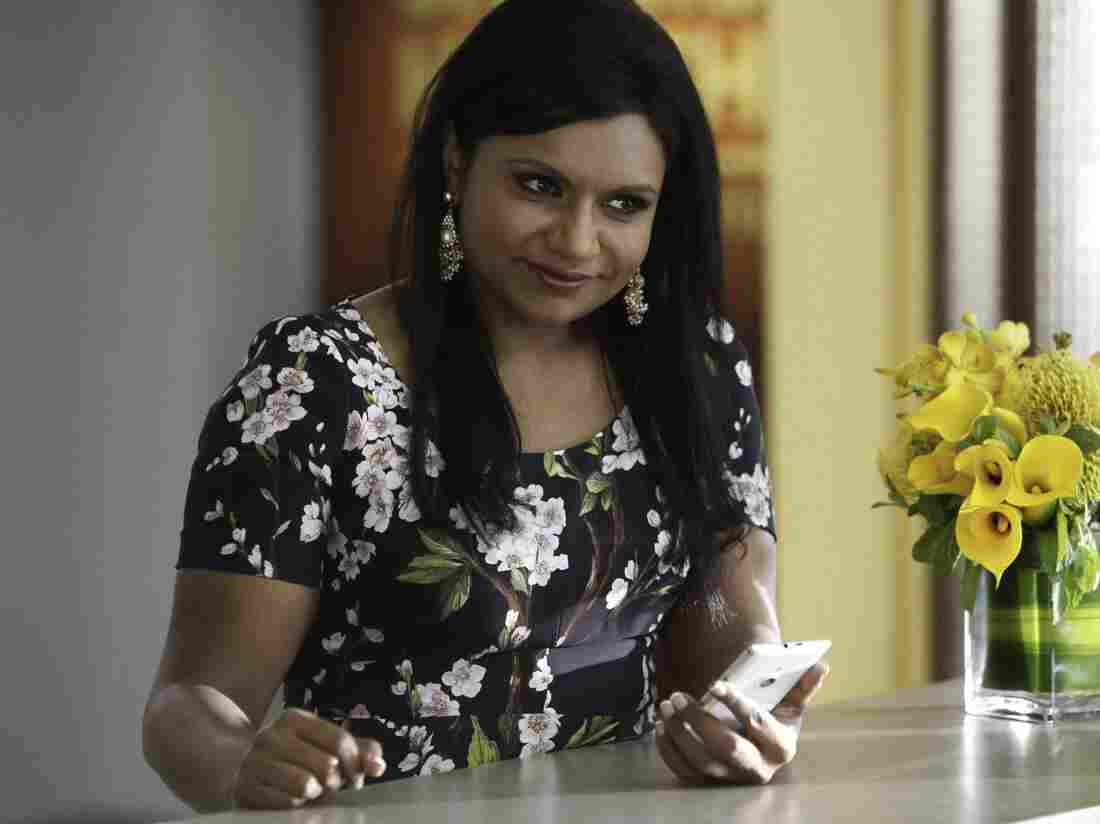 Mindy Kaling as Dr. Mindy Lahiri in The Mindy Project. See how great she is? She needs to stop changing for all her boyfriends. Jordin Althaus/Fox hide caption 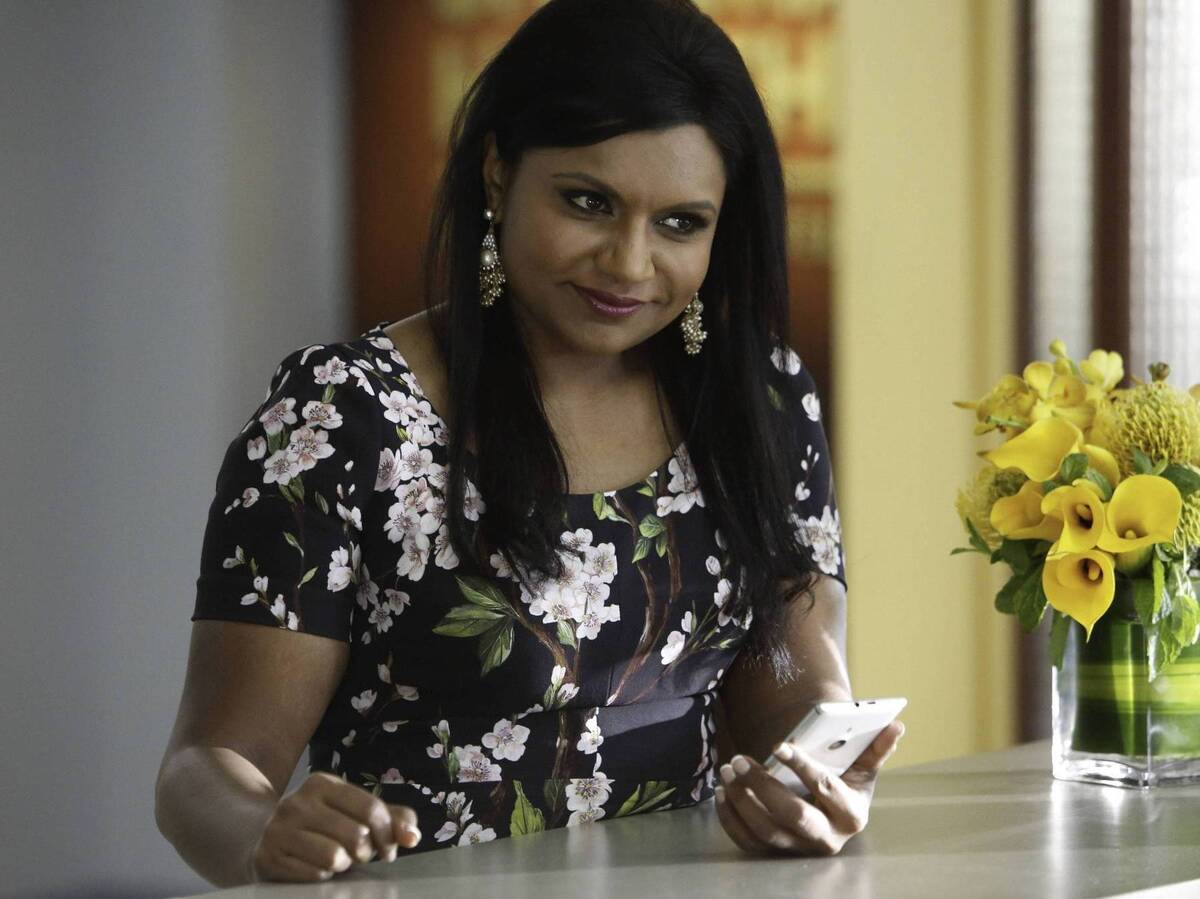 Mindy Kaling as Dr. Mindy Lahiri in The Mindy Project. See how great she is? She needs to stop changing for all her boyfriends.

I like The Mindy Project a lot. It was my favorite new comedy last year, and it continues to be one I always look forward to in its sophomore season. It's consistently funny, features strong, fully-realized characters and relationships, and Mindy Kaling is not only a brilliant creative mind – writing, producing and acting on her own show makes her one of the most powerful and influential women in TV comedy – but also refreshingly body-positive.

Dr. Mindy Lahiri (Kaling's character) sees herself as a beautiful, desirable woman who's completely confident and comfortable. And why shouldn't she be? She's a successful gynecologist with great style and a lot of flair who regularly eats bearclaws and "zeroes out [her] fridge at the end of every day." She doesn't hide these things about herself or feel any shame for them. No doubt her confidence is a draw to the many men over the course of the series to have shown interest in Dr. L, but when she responds to that interest and tries to build relationships, things begin to fall apart — for her, but also, just a little, for the show.

From the first few moments of the pilot, it was clear the show's trajectory would be to traverse the choppy waters of Mindy's romantic life. This was not a workplace comedy like 30 Rock or Parks and Recreation or even the proto-single-woman sitcom The Mary Tyler Moore Show, where women's love lives were separate from and largely secondary to their careers. The Mindy Project didn't aspire to be a job story first, which is entirely valid. Romantic stories are just as compelling and important as professional ones, and Mindy came on the scene to offer up a look at a woman who had the career and now was looking for The One. But what's begun to make the show problematic isn't Mindy's search; it's that in searching, Mindy is often all too eager to give up pieces of herself and submit herself to the whims of the men in her life.

In the April 22 episode, "An Officer and a Gynecologist," this problem came into sharp focus with the introduction of The Heartbreak Box. Dr. Lahiri, offering some guidance on men to one of her teenaged patients, shares the pictures in her Heartbreak Box – a box that, one can pretty much surmise from its title, holds mementos and pictures from all of Mindy's failed romances. Overall, the story ended on a positive note about embracing who you are and loving yourself, having confidence that one day someone will love you for who you are as well.

But the Heartbreak Box itself was troubling, not because it suggested she'd had all these boyfriends (any unmarried woman in her thirties is bound to have loved and lost), but for the way her failed romances played out. Mindy Lahiri, despite being a beautiful, confident, successful doctor, almost always finds her relationship status left up to the changing desires of the men in her life.

Most recently, that man has been Danny Castellano (Chris Messina), a doctor in her practice who ended their burgeoning relationship because he feared it would affect their friendship or their work. Mindy had no say in ending it — but then, she also had little say in starting it. She was busy trying to get back together with Cliff (Glenn Howerton), who'd broken up with her over her strenuous objections, when Danny up and kissed her in the back of an airplane. Even though Mindy was trying to get the last guy to take her back, she dropped everything when the man who had always been a friendly adversary decided to kiss her.

Before Cliff there was Casey (Anders Holm), her ex-fiancé. Urbanite and material girl Mindy chopped off her hair and traveled all the way to Haiti on a missionary trip to be with Cliff, and only broke off the relationship when she'd exhausted herself trying to embrace his various careers and lifestyles, from being a preacher (Mindy is not a Christian, as far as she knows) to being a not-very-good DJ.

Before Casey there was Josh (Tommy Dewey), who called the shots on when they saw each other and how often before it was revealed he was secretly in a relationship with another woman. And let us not forget the very first ex-boyfriend, Tom (Bill Hader), who left Mindy to marry someone else and at whose wedding Mindy made a drunken fool of herself.

In between there have been various men in Mindy's life played by various guest actors, from midwife Brendan (Mark Duplass) to Jamie (B.J. Novak) to Graham (Timothy Olyphant) and more, and in virtually every instance, Mindy has tried to mold herself into the type of woman that particular guy might want instead of trying to find a man who appreciates her exactly as she is.

This wouldn't be a problem if the show's intent was to cast Mindy Lahiri as an emotional doormat – after all, Walter White, Don Draper, Tony Soprano and many, many others have successfully headlined shows without catering to the idea of infallibility, or even likability. But The Mindy Project has always set the stage tonally with Mindy as the lead in her very own rom-com, and, despite her quirky, sometimes superficial, nature, she's always been sure of herself.

Subverting that self-assuredness when it comes to romance is not only, as evidenced, a repetitive and unsurprising plot device, but one that's both discordant and discouraging for a show with a female lead who, in every other way imaginable, is an unapologetic authority on her own tastes and desires. It's not any fun to watch Mindy undermine her sense of self over and over again in order to please one of the increasingly mercurial men who surround her. And, for a sitcom, being fun to watch is kind of the point.

More than just that, though, it makes less and less sense for Mindy to be able to so eloquently and thoughtfully tell her patient Jenny (B.K. Cannon) that there's no need to change who she is in order to find a man who will love her, without ever gaining the ability to follow that advice for herself, or even notice that she's not.

But there may be progress as we approach Tuesday's season finale. Last week's episode, "Girl Next Door," the penultimate episode of season 2, addressed Mindy's weird dependency on men directly, with hot police detective Charlie (Tim Daly) calling her out on it. Mindy herself took a big leap forward with regard to Danny by rejecting his attempted kiss and asking him why he's only interested in her when there's another man in her life.

Even though Mindy still seems to be going straight from one man to another, with little time for herself in between (a possible side effect of the show's blurry timeline, in which "months" pass over the course of 2 or 3 episodes), the self-assertiveness she exhibits feels like a bright light at the end of a long tunnel.

One can only hope that this is a sign of things to come and that, in the future, Mindy Lahiri, M.D. will be nothing more and nothing less than exactly who she is – an occasionally flighty, always devoted doctor who cares about her patients, likes nice things and celebrity gossip, and plays a little saxophone in her spare time – with whomever she ends up with, and that The Mindy Project will be able to find meatier, more distinctive, and more satisfying conflicts for its heroine than it has to date.